For travelers who love to avoid the crowds, the 15 least-visited national parks in America may be perfect spots for a vacation. But be prepared: There’s a reason these parks don’t see a ton of visitors. Many are located in remote parts of the country.

So if you plan to see them all, you’ll need a huge budget, reliable transportation, and even a small bush plane in some cases. You can always use my budget travel tips to stretch your dollar! 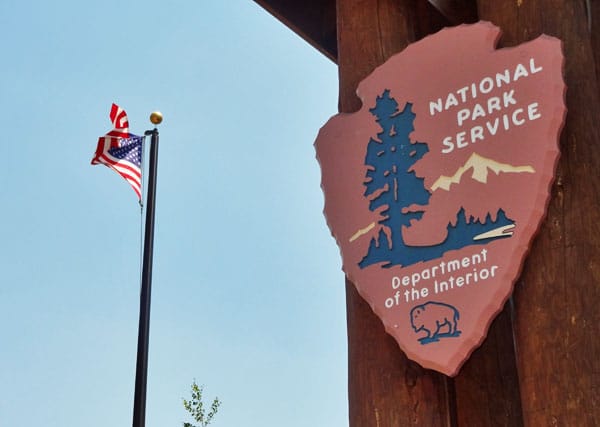 All of them are amazing, but these are the 15 that, for various reasons, aren’t seeing as much traffic as the others.

By the way, I’m doing my part to help these overlooked parks – I’ve personally visited 8 of the 15 on the list. And I’m coming for some of the Alaska parks next summer!

Changes in the 2023 Rankings

Rankings have been updated for 2023 based on NPS attendance statistics for ’21. We’re using the most current figures to create the most accurate list of the least popular parks. When the ’22 stats are released, we’ll update this list.

Attendance figures have varied wildly over the past few years due to the pandemic. The eight national parks in Alaska have taken the biggest hit in traffic. Not as many people have been willing to fly to Alaska the past few years, so attendance there has dropped quite a bit.

Accordingly, in our updated list for 2023, there are two new parks in the Top 15 list. Denali NP and Glacier Bay NP (both in Alaska) sadly move onto the list of least-visited parks. At the same time, Pinnacles NP and Virgin Islands NP have earned enough visitation to drop off the list.

And congrats to Black Canyon of the Gunnison, Kenai Fjords, Channel Islands, and Carlsbad Caverns National Parks, which all saw just enough visitors last year to avoid appearing on this list.

The 15 Least-Visited National Parks in America, Updated for 2023

Big Bend is the most well-known national park in Texas, while the much smaller Guadalupe Mountains NP gets overlooked. Much of the park is desert, but there are also high-elevation areas above 7000 feet.

There aren’t many places in Texas to see alpine forest, so this place is unique in that regard. It’s only a 30 minute drive from Carlsbad Caverns NP in New Mexico, so make the trip the next time you’re in the area! It’s a good detour if you’re taking a road trip between California and Texas.

Guadalupe Mountains National Park actually set an all-time record in attendance last year with 243k visitors. Perhaps in the next year or two, it will drop off this list entirely!

Those into boating and bald eagle-watching should consider visiting Voyageurs, a national park in northern Minnesota along the Canadian border. There’s some hiking and camping here, but much of the park is not accessible by car.

Here, it’s all about the water. Take a ferry cruise to explore some of the islands. During my visit, I saw more than a dozen bald eagles. A whopping 1300 eagle pairs live in the park! 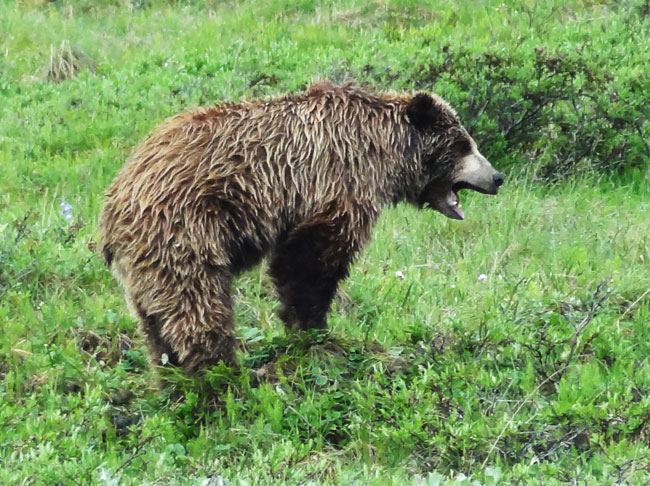 Denali is traditionally the most popular of Alaska’s eight national parks. Its six million acres of pristine wilderness, diverse wildlife, and great camping opportunities typically attract around 600k visitors each year. But during the first pandemic year, that total plummeted to 54k, before rebounding to 229k last year.

I don’t expect Denali to remain on this list for very long. Once people start resuming their Alaska vacations, Denali visitation will soar again. It’s the prime spot on an Alaska road trip between Anchorage and Fairbanks. You can even take a bush plane flight into the park and land on a glacier!

South Carolina’s Congaree, which became a national park in 2003, includes forest and swampland ecosystems. Many visitors rent canoes or kayaks in Columbia and spend a few days on the water in Congaree. 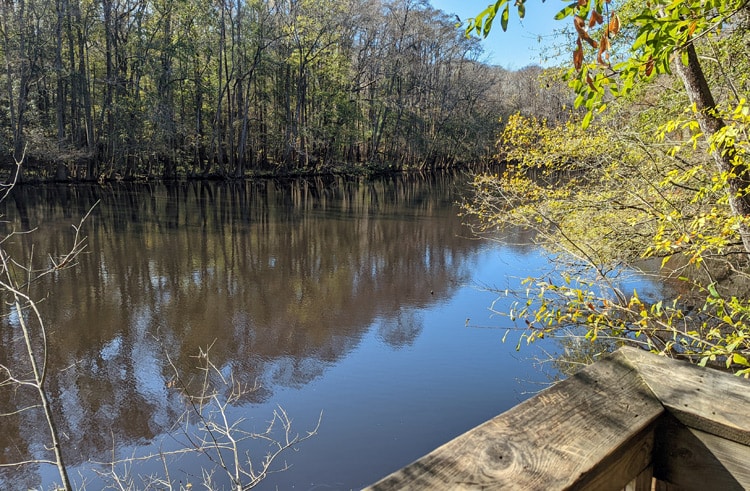 Primitive and backcountry camping are available for those brave enough to give it a shot. The 215k people who visited Congaree last year were the most in the park’s history. I was excited to finally visit Congaree last summer, because it’s so different from many other national parks.

There’s a boardwalk through the forest that visitors can use to hike when the ground beneath is swampy.

RELATED READING: Things To See and Do at Hawaii Volcanoes National Park

There’s a glacier in Nevada! Who knew? Great Basin National Park is five hours north of Las Vegas. One of its coolest features is the Wheeler Peak Glacier, which sits at the base of the 13,000 foot Wheeler Peak. Guests can reach the glacier with a two-mile, uphill hike.

Unfortunately, the glacier is almost entirely covered by rocks. I could barely see any actual ice when I visited last year. So set your expectations properly if you decide to book a trip here.

At last measurement, the glacier was only 300 feet long by 400 feet wide, and scientists predict it will disappear entirely within 20 years. So visit now! It seems that word is getting out – Great Basin’s tourist traffic has risen 94k to 144k in the past ten years.

Glacier Bay National Park is located near Alaska’s capital city of Juneau. A large portion of its traffic typically comes from cruise ship visitors, who view the otters, seals, and bears from the boat. Passengers often take day trips to see the park’s impressive glaciers, icebergs, and hiking trails.

Everglades is known as the premiere national park in southern Florida, but Dry Tortugas is even more interesting in a lot of ways. It’s a series of islands located 68 miles west of Key West out in the Gulf of Mexico.

Besides being a great place to snorkel and go camping, Dry Tortugas is the home of Fort Jefferson, an unfinished pre-Civil War fort built to combat Caribbean piracy. You can only reach Dry Tortugas by seaplane or boat. There are ferries that will take you directly there from Key West.

Since it’s located just off a highway, Wrangell-St. Elias is one of the most easily accessible parks in Alaska. It’s also the largest national park in the U.S., so I recommend stopping by during any visit to the state.

I was one of the visitors to Wrangell-St. Elias a few years back, though I never made it past the visitor center. I’m guessing that’s true for a lot of folks who make a quick visit on their Alaska road trip. Those who pay to take the shuttle bus deeper into the park can check out the abandoned mining town of Kennecott.

When it comes to the least visited national parks in the lower 48 states, Isle Royale has always taken the prize. Until now! Last year, Isle Royale saw more visitors than North Cascades for the first time.

Isle Royale National Park is a remote island (45 miles by 9 miles long) way up along the Canadian border. With 36 different campgrounds in the park, there’s no question what the main recreational activity is here. Isle Royale is a great place to watch for moose and go on lengthy hikes, far from other people.

Isle Royale is only reachable by ferry, so most visitors tend to stay for a minimum of a few days. You’ll have to plan ahead to secure your ferry reservation.

Katmai National Park is one of the best places in the world to see brown bears. The southern Alaska park is difficult to reach but thousands make the effort because more than 2,000 bears live in the park.

Guests are encouraged to check out Brooks Camp, where the bears feed on salmon in July and September. The brown bear salmon cam there is one of the best national park webcams in America!

Situated 100 miles southwest of Anchorage, Lake Clark is the home of glaciers and active volcanoes (one erupted in 2009) and also provides boating and fishing opportunities, plus wildlife such as bears, Dall sheep, bears, caribou, coyotes, wolves, fox, lynx, and wolverines.

This is another park which is typically reached by small plane, which explains why it doesn’t see a lot of visitors. It’s yet another Alaska park where bear-watching is a primary activity.

The lucky residents of Washington state (hey, that’s me!) have three national parks to choose from. So while Olympic and Mt. Rainier get lots of traffic, North Cascades lags behind.

North Cascades NP only appears on this list because of a technicality. The main road going through the park (Route 20), plus the visitor center and attractions like Diablo Lake, are technically located in adjacent Ross Lake National Recreation Area, rather than the national park itself.

There are only two roads actually within the official park boundary, and both are gravel roads that are typically only traveled by adventurous hikers.

This place is more appropriate for climbers and campers than your typical weekend RV traveler. There are some nice day hikes here, though. You can include North Cascades as part of a road trip to all three Washington national parks!

Located entirely within the Arctic Circle, and accessible only by plane or snowmobile, Kobuk Valley is known for its annual migration of 400,000 caribou and its 20,000 acres of sand dunes. Nobody expects to see sand dunes in a place like Alaska, so that natural feature makes Kobuk Valley stand out!

A lot of people aren’t even aware that Samoa is a U.S. territory, or that it has a national park. Established in 1988, the National Park of American Samoa covers three islands and more than 13,000 acres, one third of which is ocean. Snorkeling and hiking are among the top activities in this protected region.

Traffic to the American Samoa park has fluctuated wildly in recent years, reaching a peak of 69,000 in 2017 before falling drastically during the past few years. Getting here takes 14 hours by plane from California, or 5.5 from Hawaii.

About 7,300 people visited Gates of the Arctic National Park last year. That works out to about 20 per day. Twenty! When you consider that the park consists of more than 8 million acres, you can see why this place is easily your best opportunity within the national parks system to get away from civilization.

Gates of the Arctic is not directly accessible by car, though you can reach the edge of the park by hiking a couple miles west from the Dalton Highway on an Arctic Circle road trip.

Those who do make it here come for the scenery and the wildlife. If you’re considering becoming one of the rare visitors to Gates of the Arctic, check out this lengthy park video put together by the National Parks Service:

That’s it for our countdown of the 15 least visited national parks in the USA! Just because they are the least crowded parks doesn’t mean they don’t have a lot to offer. Which one would you most like to visit? 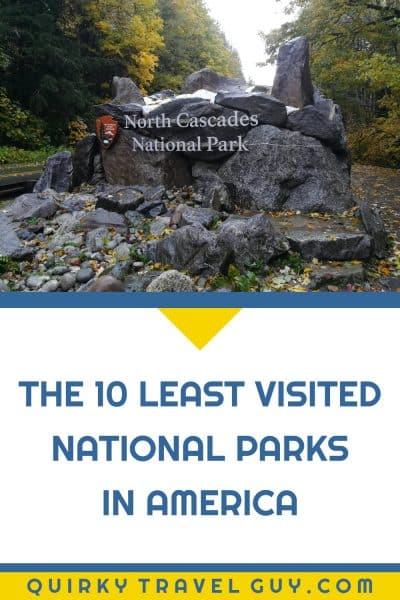 9 thoughts on “Under the Radar: The 15 Least-Visited National Parks in America”