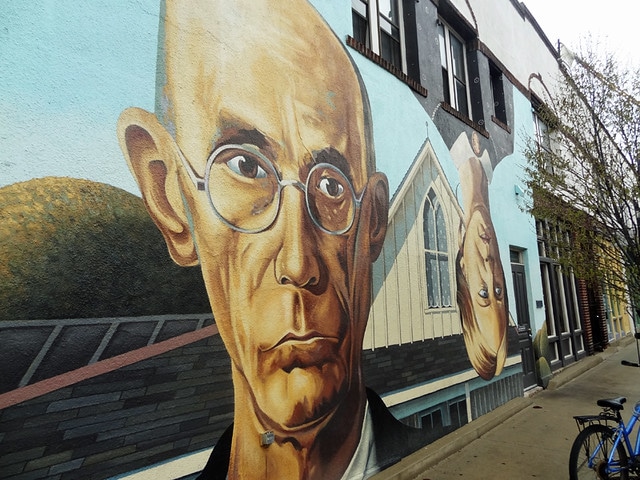 Columbus, Ohio was a city that really impressed me. It’s modern, youthful, trendy, quirky, and fun. Columbus has lots of unique things to do and see, so consider this just the tip of the iceberg.

From the slimmest wallets you’ve ever seen to a creative ice cream vendor to a massive bookstore (yes, they still exist), I found some cool stores and attractions in Ohio’s capital city during my recent visit.

If you’re seeking fun things to do in Columbus, interesting neighborhoods and local shops, and cool Columbus shopping options, read on for some of my top recommendations. (Updated 2023)

NOTE: In addition to the 12 items listed below, you may want to consider grabbing a ticket to Legoland if you are traveling as a family.

Cool and Unique Places to Shop and Visit in Columbus, Ohio

Tucked away in the historic German Village neighborhood, the Book Loft has half a million books in 32 rooms on two levels.

Pick up a map of the store to help you navigate. Or just wander around through the rooms of books about politics, music, humor, history, travel, and pretty much everything else you can think of.

The Book Loft is open late, so it’s easy to get lost in the world of print and spend the better part of an evening here. (Believe me, I know.) The Book Loft is consistently voted the top bookstore in Columbus, and I’ll go so far as to say that it’s worth mentioning in the same breath as Portland’s famous Powell’s Books.

The term “indoor marketplace” doesn’t tell the full story of the North Market. 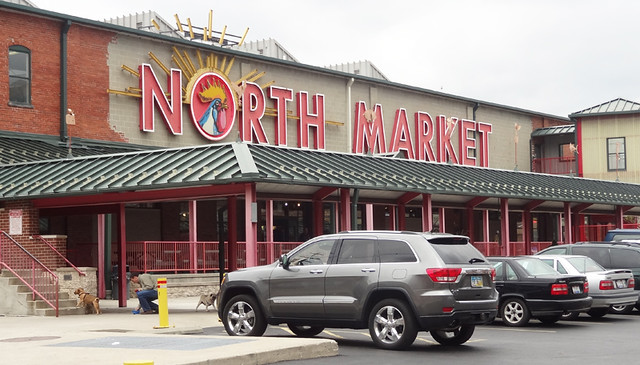 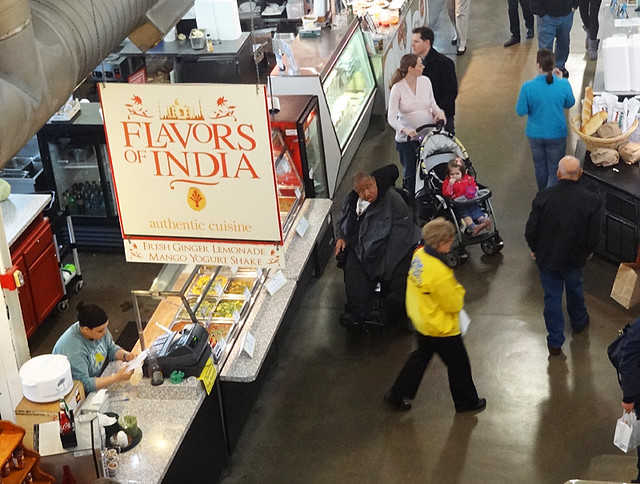 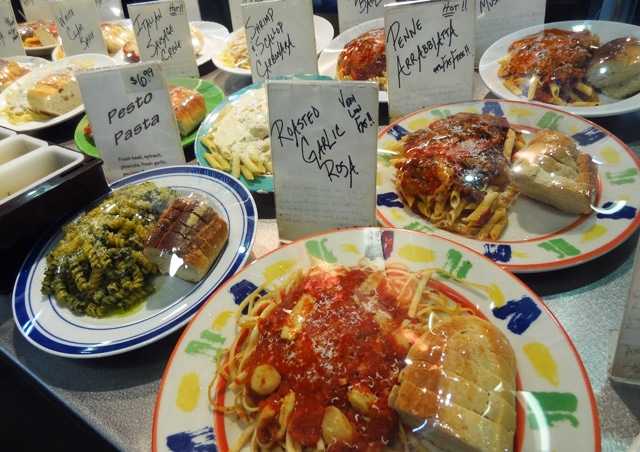 Food is a big part of the North Market, with all sorts of ethnic restaurants and various stands offering everything from barbecue to ice cream.

My favorite spot was an “Organic Greenfix” stand giving out free samples of an energy juice. Lately I’m all about the health benefits of juicing, so seeing how they made their juices (kale, spinach, dandelions, lettuce, apples and banana) was enlightening.

The best ice cream in Columbus comes from Jeni’s, which offers a slew of interesting flavors.

The pistachio & honey, whiskey & pecans, and wildberry lavender were tempting, but I went with a three-scoop cup of Ugandan vanilla bean, something peanut buttery, and “the milkiest chocolate in the world,” which just might have lived up to its name. 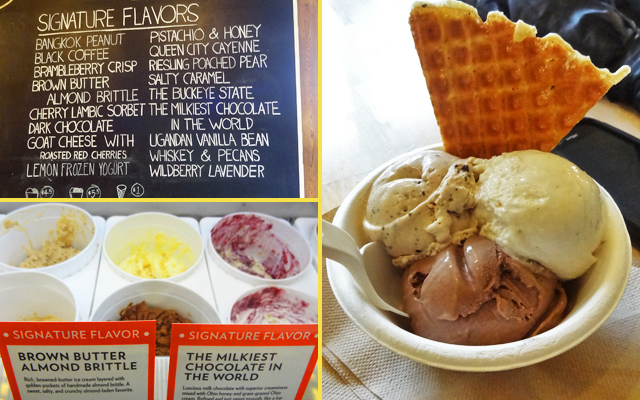 Jeni’s has scoop shops around the city, but I suggest checking out the one on High Street in the Short North, the coolest neighborhood (among many) in town. The Jeni’s oatmeal cookie ice cream sandwich is the single-greatest frozen confection I’ve ever eaten!

Until 2014, the Arnie statue sat outside the Veterans Memorial on Broad Street. But it has since been moved to the convention center in downtown Columbus. Arnie came back to the city to be present for the re-unveiling of his likeness. 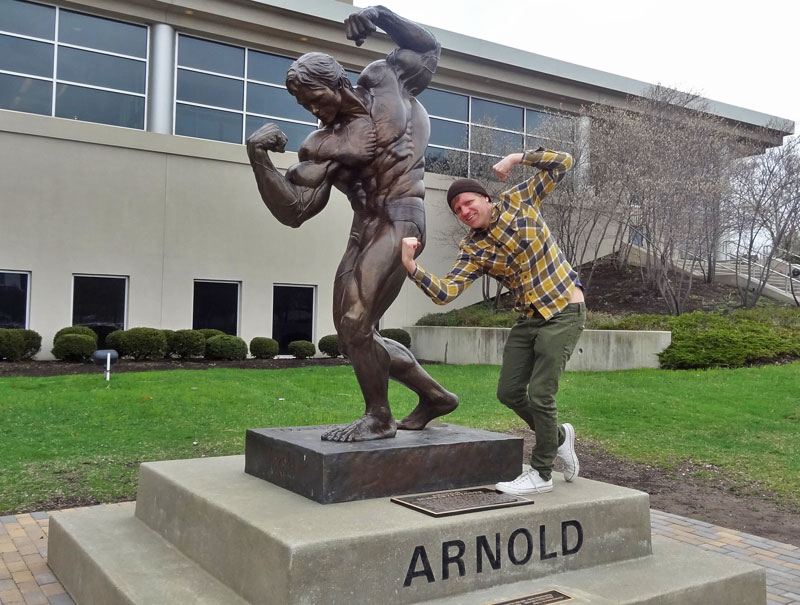 Eight feet tall, the bronze figure serves as a reminder of the annual Arnold Sports Festival in the city. The Schwarzenegger statue is conveniently located near some other popular sights.

After spending a few minutes posing with the Governator, check out the Cosi science center or walk along the banks of the Scioto River.

The venerable Southern Theatre has been entertaining Columbus citizens since the Grover Cleveland administration. Seriously, this place opened all the way back in 1896! That makes it one of Ohio’s oldest theaters.

This place has hosted all sorts of entertainment over the years, from silent films and vaudeville tours to movie and country music concerts.

These days, the venue mostly hosts jazz and classical music performances, with the occasional standup comedy or musical play performance. Check their upcoming schedule to see if something suits your taste. Or just stroll by on Main Street to observe the historic exterior of the building.

The quest for awesome thrift store t-shirts is a neverending one, and it took me to Rag-O-Rama in Clintonville.

Normally, if I come out of a store with a single garment of clothing, I consider the trip successful. Miraculously, at Rag-O-Rama I actually found four different shirts that I immediately needed to own.

Also worth mentioning is Flower Child, a vintage store in the Short North with some amazing retro furniture and clothing. Best item for sale: a Kermit the Frog telephone from the ’70s. Both of these shops are worth checking out if you’re looking for weird places in Columbus! 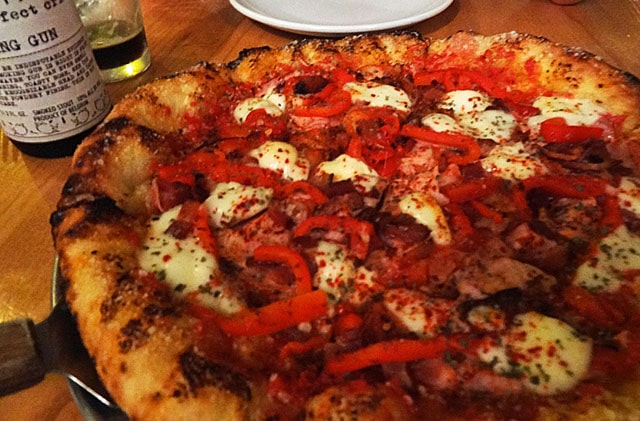 Located not far from the Book Loft, the Harvest Pizzeria is another German Village hotspot, a cozy restaurant with an attached bar. They’re big on using local ingredients.

I went with the Ohio double bacon pie with mozzarella, roasted red pepper and oregano. I loved those fluffy homemade crusts and enjoyed checking out a couple random selections from their beer list.

Did you know there’s only one manufacturer of metal whistles left in America? And that its headquarters are in Columbus, Ohio? And that you can tour the factory for free? Cool, cool, and cool!

The American Whistle Corporation was founded in 1956 and changed hands a few times before ending up in its current spot. The company offers free 45-minute tours to guests on weekdays. You can go behind the scenes to see old and new machinery that makes the reliable brass whistles.

Touring a whistle factory is one of the most unique activities in Columbus for sure. It’s an especially good idea for families with curious kids. You’ll even learn how they get that little ball inside the whistle! 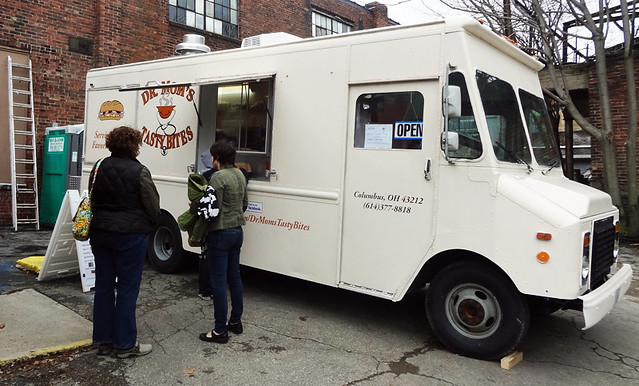 Food trucks are always cool. It’s especially clever that a bunch of trucks congregate in Columbus in a vehicle food court of sorts. From 11 to 2 on weekdays, stop by and pick and choose items from whichever trucks you like, then eat in a cafeteria setting.

Daily offerings change but there’s always some good variety, from burger trucks to crepe stands. I know a lot of cities where this sort of setup would be a welcome addition to the workday lunch scene!

The 16-Bit Bar & Arcade is a chain that began here in downtown Columbus and has been rapidly expanding across the Midwest. It’s exactly what it sounds like – a bar that has arcade old-school games.

Patrons can get tipsy while they choose from 40+ classic arcade video games, including Donkey Kong, Asteroids, Frogger, Burgertime, and my all-time favorite, Paperboy. There are also Elvis-, Metallica-, and Indiana Jones-themed pinball games.

Businesses like 16-Bit are why the Columbus city center has way more fun and unique places to go than the boring suburban shopping malls.

Zer0z will make you completely re-evaluate your life. Or at least your billfold. I’ve been known to possess a George Costanza wallet from time to time, but the folks at Zer0z have created sleek little wallets, just big enough for 10 cards and your bills. Perfect for a minimal lifestyle. 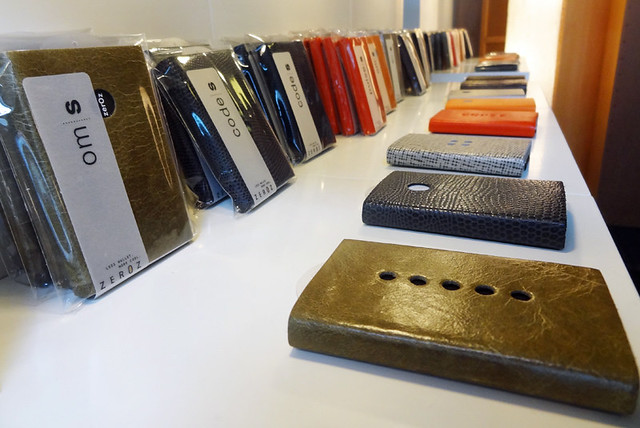 Look at the size of this Zer0z wallet compared to my old one. Finally, a wallet made for the pockets of tight pants!

The wallets come in various colors and styles, and they stitch them on-site at the downtown store.  People have been so drawn to the slim concept that they often leave their old wallets behind when they purchase one of these. This is a pile of actual discarded customer wallets. Amazing! 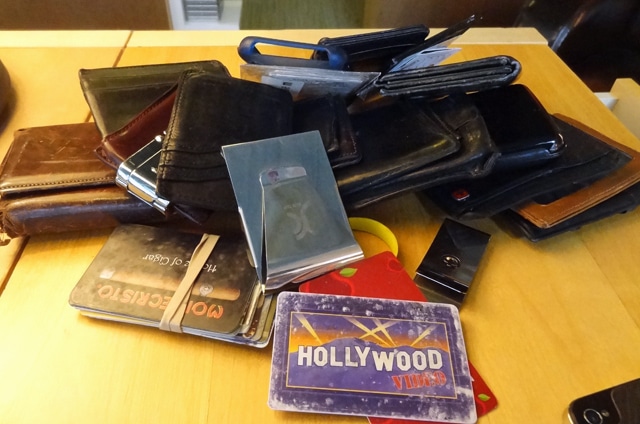 For fans of unique shopping opportunities, Zer0z is one of the coolest stores in Columbus and it has a storefront located at 17 East Gay Street. You can also check out their website and make orders online.

If your idea of fun things to do in Columbus includes exploring a bit of nature, definitely stop by Scioto Audubon Metro Park. It’s located just south of downtown near the German Village.

The 120-acre green space along the river is great for kayaking, fishing, bird watching, or hanging out and eating lunch. There’s a 10-mile bike trail here, as well as a challenging obstacle course and multiple bouldering and climbing walls that go as high as 35 feet.

Looking for other interesting places in Columbus? Check out my article about touring the city on a Segway, which includes photos of the Ohio state capitol building (it’s one of the few in the U.S. that doesn’t have the usual dome shape), the giant entrance arch from Union Station, and Goodale Park, a fun spot in the Short North.

Don’t miss this photo essay of Columbus, with pics from Ohio State’s campus, including the quirky statue of a giant praying mantis on campus, and of course, the mural of the famous American Gothic painting.

And if you’re up for a short road trip, the heart of Amish Country in Berlin, Ohio is only two hours east.

Which of these fun things to do in Columbus is your favorite?

Note: My visit to Columbus was made possible by Experience Columbus, with thanks to the Renaissance Hotel.