I mentioned the Alamo Theater in the very first post on this site, which spotlighted five cool hipster places across the U.S. This Austin cinema opened in 1997 and has already become a landmark and a mecca of sorts for those who can’t stand talking in theaters.

How the Austin Alamo Theater deals with rude customers

The Alamo has a long-standing policy of not allowing kids under 18 without a guardian – for any movie – and not allowing talking and texting during screenings. The aim is to minimize disruptions that can take away from viewers’ enjoyment of the film.

This policy earned national attention earlier this year, when a patron who had been kicked out left a nasty message on the theater’s voicemail. The theater posted the message in a YouTube video that mocked the complainer. How awesome is that?

Everyone from CNN to The View weighed in on the controversy, with most agreeing that booting out troublemakers in theaters is the way to go. From the venue’s website:

“When we adopted our strict no talking policy back in 1997 we knew we were going to alienate some of our patrons. That was the plan. If you can’t change your behavior and be quiet (or unilluminated) during a movie, then we don’t want you at our venue. Follow our rules, or get the hell out and don’t come back until you can.” 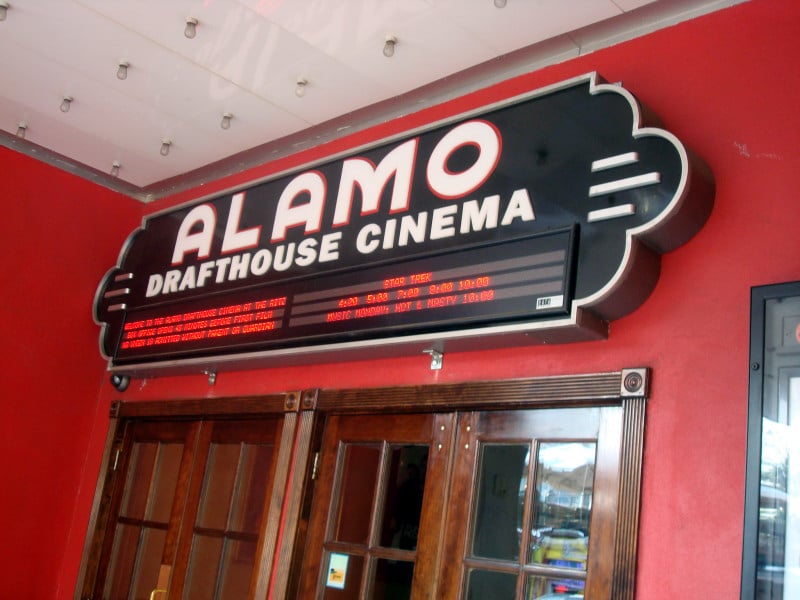 As its name implies, the Drafthouse Cinema serves beer and food. There’s spacious seating with tables in every row so you can dine and enjoy yourself while you view.

The coolest thing about the Alamo is that they don’t make you sit through previews for upcoming movies. Instead, they give you several minutes of customized content, which may include original animation or clips from old movies or tv shows.

When I went to see Star Trek there in 2009, the preshow content included Star Trek parody sketches from late-night shows. The preshow is a brilliant idea that only a small, non-national theater could come up with.

Note that when this article was first published, there were 10 Alamo locations around the country, and they were growing. Now, as of 2020, there are 24(!) Alamo Drafthouses. Though many are in Texas, they’ve branched out as far as Los Angeles, Omaha, Yonkers, and Raleigh.

For my money, the original Austin location is still the one to visit! And for another quirky experience while you’re in the city, go bat viewing in Austin at the Congress Avenue Bridge.

2 thoughts on “Enjoy a Movie at the Original Alamo Drafthouse Cinema in Austin, Which Kicks Out Rude Patrons”