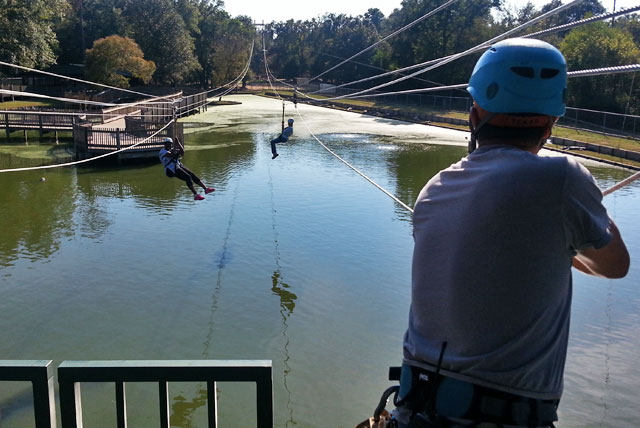 What’s better than ziplining? Try ziplining while hungry gators circle underneath, nipping at your heels as you zoom past, waiting to devour anyone who falls!

Ok, gator ziplining isn’t quite that extreme – the harnesses are secure and the cables are far enough off the ground that no one’s going to lose any limbs. And most of the sunbathing gators couldn’t care less about the excited humans whizzing by overhead. Still, the presence of the sharp-toothed reptiles at Gators and Friends Alligator Park in Greenwood, Louisiana (20 miles outside Shreveport) definitely ramps up the adrenaline factor. 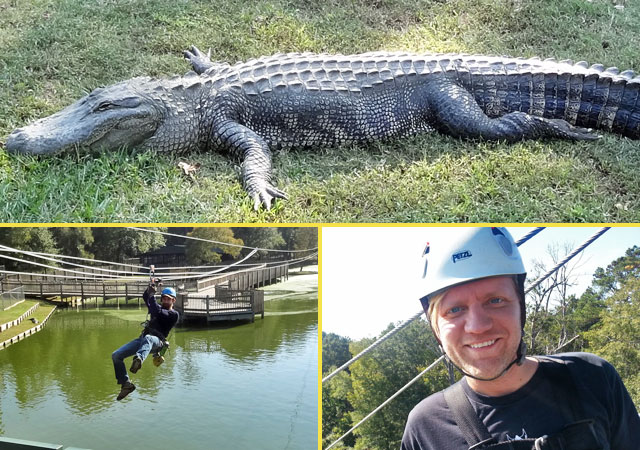 What’s it like to go ziplining at an alligator park in Louisiana?

The first of the seven zipline runs at Gators and Friends is the shortest, so in one respect it’s a good way for those with cold feet to ease into things. But it also goes right over the swimming gators, providing a double-dose of fear, or exhilaration, depending on your perspective.

RELATED READING: Where to See Alligators in the Everglades

This was my first time ziplining, so initially I stayed in the seated position, but as I grew more comfortable and picked up some tips and encouragement from the guides, I ended up zipping upside-down on a couple runs. There’s nothing like the freedom of hanging and spinning 40 feet in the air! 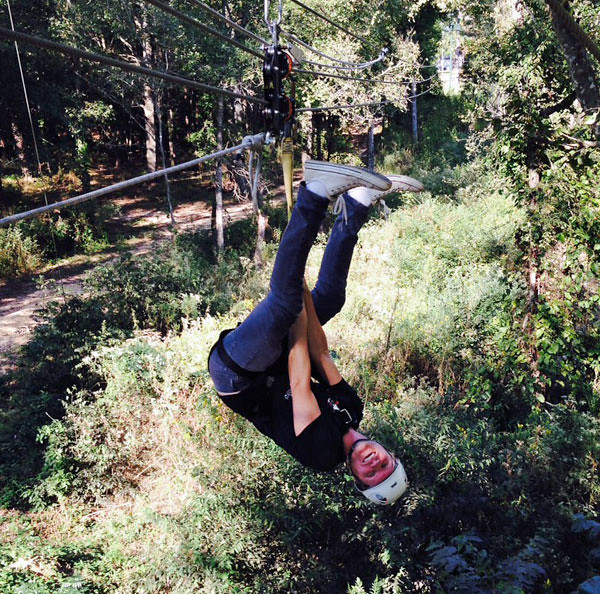 The lines gradually get higher and longer. Some go through the woods, and other pass over the animal farm portion of the complex. The “and Friends” part of the establishment refers to the animal park that includes camels, ostriches, donkeys, zebras, and even the occasional zonkey. If you ever want to see a bewildered donkey, race past on a zipline 20 feet above its head. 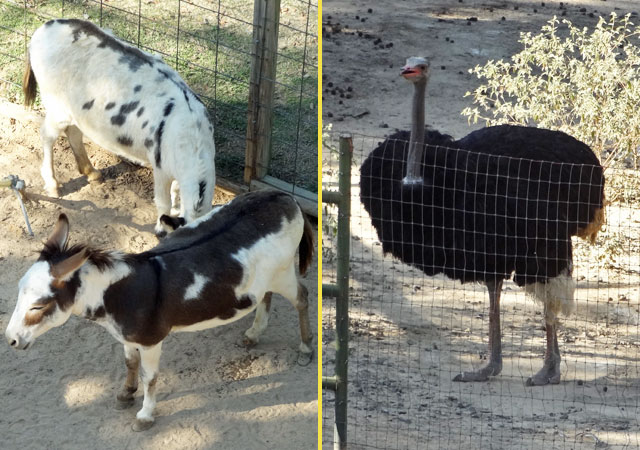 The whole operation feels very reliable, thanks to safety-conscious guides and sturdy equipment. The staircases sway slightly from side to side as you walk up, which is by design – being flexible keeps them from cracking. The slight wobble, while somewhat intimidating, is a safety precaution. 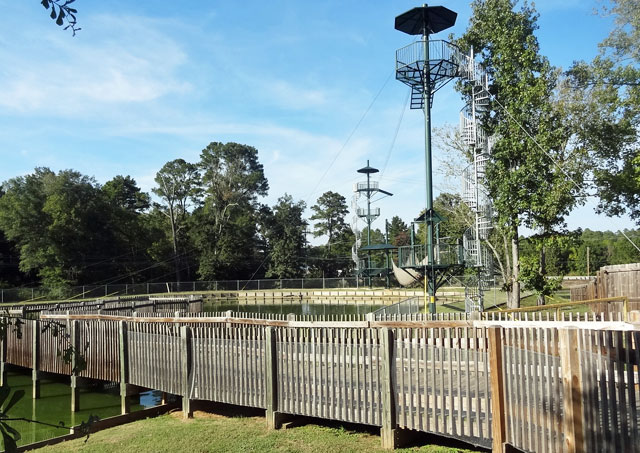 Here’s the view from the final zipline tower, which begins in the animal farm and proceeds across the long gator swamp. 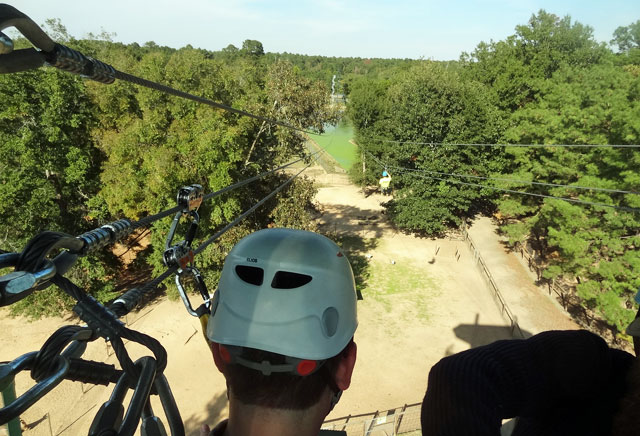 Once the zipping was done, I had a chance to check out some of the alligators sitting around near the main office. These suckers are massive. Way bigger than the wild ones in the Everglades!

My only complaint about gator ziplining is that it may have ruined me for all future ziplining excursions. Zipping through some random patch of woods just isn’t going to be as thrilling without the theoretical possibility that I could be eaten alive by eager carnivores should something go wrong. Gator ziplining is about as good as it gets.

Unless, of course, someone invents shark ziplining. There you go, entrepreneurs of the world. You have your next assignment. 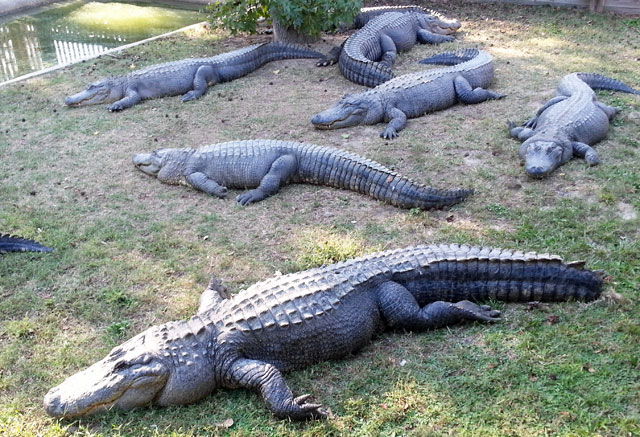 As of 2019, the hours for Gators and Friends zipline and alligator park are 10 am to 6 pm. They’re open everyday during the summer, and only from Wednesday through Sunday during school season (August 15 – May 25.) The cost is $9.50 for basic admission to the park, plus $35 for a package of four zipline runs. You can also pay $60 for a package of seven zipline runs.

My visit to Gators and Friends was made possible by the Shreveport-Bossier Tourist Bureau.

Other places to go ziplining in Louisiana

Surprisingly, there aren’t many other places to go ziplining in Louisiana aside from Gators and Friends. The only other location currently available is Soaring Spirits, in the north central Louisiana town of Ruston.

The only New Orleans-area ziplining available is the company called Rentazip. They offer rentals of the entire ziplining rigging for companies that want to set up temporary zips for festivals or events. 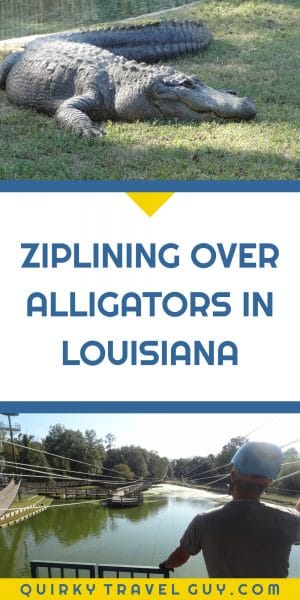