The late actor Andy Griffith will always be Ben Matlock to me (cool discovery of the day: Matlock was once on the Simpsons!) But Griffith was probably better-known for his role in The Andy Griffith Show, the classic black-and-white program with the whistling theme song.

Another character on the show was little Opie, played by a young Ron Howard. Both Andy and Opie have been honored with a statue in Pullen Park in Raleigh, North Carolina.

It’s a popular tourist attraction for folks passing through North Carolina, or anybody who loves classic television. Check it out!

This is a lifesize statue that depicts Sheriff Andy looking down at the young boy and holding his hand. Both are holding fishing rods. The statues are located along the sidewalk near the carousel. Feel free to walk right up to them and take photos with Andy and Opie! 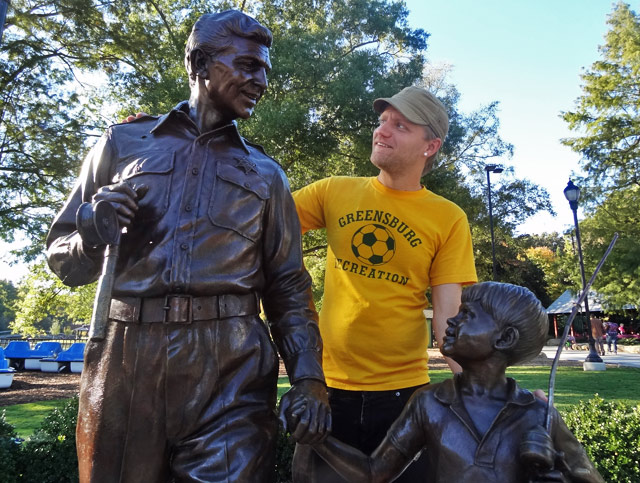 Pullen Park is a nice 66-acre park with lots of things to do, so you can easily spend an hour or two there if you like. In addition to the Andy and Opie statue, the park has tennis courts, playgrounds, shelters for rent, a cafe, an Arts Center, a Community Center, and an Aquatic Center featuring an indoor Olympic pool.

Pullen Park also has a welcome center with rides including a carousel, train, and pedal boats. Tickets for the amusements are $1.50. The park also hosts regular Theatre in the Park events.

The Other Andy Griffith Statue in Mount Airy

Side note: There’s another Andy Griffith statue in the actor’s hometown of Mount Airy, North Carolina, which also holds a festival in celebration of his legacy. That statue sits outside the Andy Griffith Museum.

Raleigh and Mount Airy are about 140 miles apart, so you’ll need to take a short road trip in order to see both North Carolina statues of Sheriff Andy.

By the way, there’s another cool celebrity museum near Raleigh: The Ava Gardner Museum, a facility dedicated to the legendary actress. Her museum is 30 miles outside Raleigh.

About the Andy Griffith Show 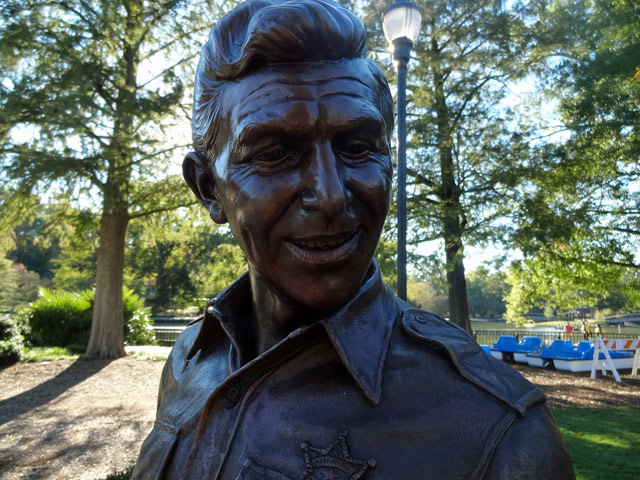 The Andy Griffith Show aired on U.S. television from 1960 to 1968. Griffith starred as Sheriff Andy Taylor of Mayberry, North Carolina, a fictional town. Don Knotts played Andy’s cousin, Deputy Barney Fife. The show ranked #1 when it went off the air, joining I Love Lucy and Seinfeld as the only shows ever to do that.

Andy’s character was one of the nicest and friendliest characters on tv, which is partly why people have so much love for him to this day. Opie was Andy’s young son on the program.

Don Knotts (who is buried in Westwood Village Cemetery) won several Emmys for the role. The show itself never won the award for Outstanding Comedy Series – it lost to The Monkees in 1967!