Thinking about visiting the Yukon in summer? This northern territory in Canada is an underrated travel destination during July and August, when the weather is nice, the sun stays out almost the entire day, and the hiking and nature is at its best.

How much do you know about the Yukon? A lot of Americans only know the basics: It’s the part of Canada that borders Alaska, it’s where thousands of people flocked in the 1890s to join the Yukon gold rush, and it’s cold.

I visited the Yukon for a week and discovered a bunch of great sights and activities. Such as a two-day major music festival, unique attractions like a cabin where The Call of the Wild author Jack London once lived, some cute and remote small towns, plenty of great hiking and wildlife, and lots of character (and characters) that I will never forget. 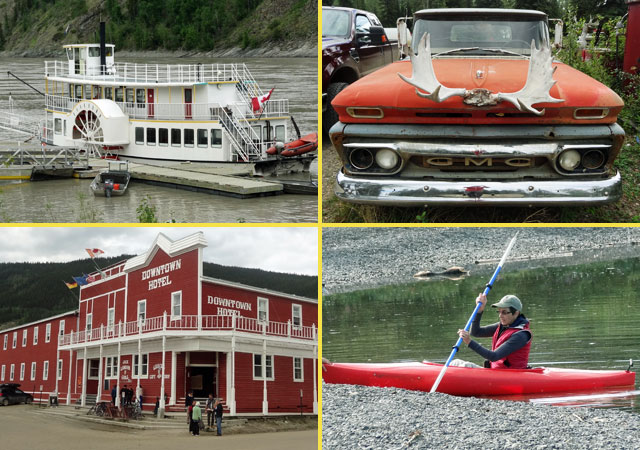 Let’s go over some fun facts about the Yukon territory, and then cover things to do in the Yukon in summer, cities and national parks to visit, where to stop on a Yukon road trip, and what kind of weather you can expect.

Facts About the Yukon

Before getting to the highlights of my summer visit, let’s get caught up with a few fun facts about the Yukon:

-Only about 34,000 people live in the Yukon territory. More than 23,000 of those reside in Whitehorse, the capital city, while nearly another 2,000 live in Dawson City. The rest are scattered in smaller communities. 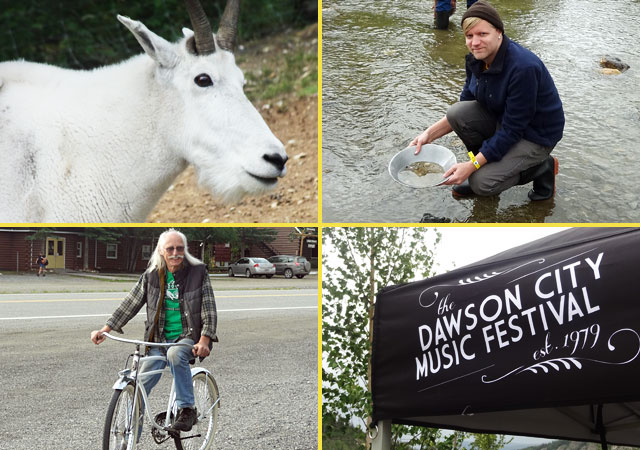 -At its peak during the gold rush, Dawson City was once home to around 40,000 miners. Interestingly, gold mining remains one of the biggest industries in Dawson, though the current levels of gold production are nowhere near what they once were. Tourism is also a big draw right now.

–First Nations – the native peoples of Canada – are a huge part of Yukon society. About 30% of Dawson City’s population consists of First Nations members, and the various tribes are represented throughout the territory with artwork, festivals, museums and historic sites. Many towns and attractions (such as Kluane National Park) are named after First Nations. 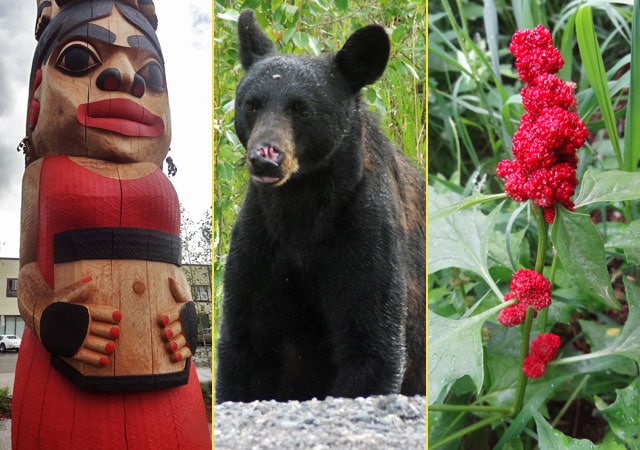 Weather in the Yukon During Summer

June through August is the Yukon’s short-lived warm season. High temperatures can approach 80 F (27 C), though they are usually closer to 70 F. The mountainous scenery is beautiful.

There’s no snow in the summer, unless you go visit some of the Yukon’s mountain peaks. The hiking trails are mostly clear and dry, perfect for taking a stroll through the forest (watch for bears!)

The cool thing about visiting the Yukon at this time is that sun stays out almost until midnight. I attended the Dawson City Music Festival, and by the time I was heading to bed, it was still light outside. How unusual!

Places to Visit and Things To Do in Yukon in Summer 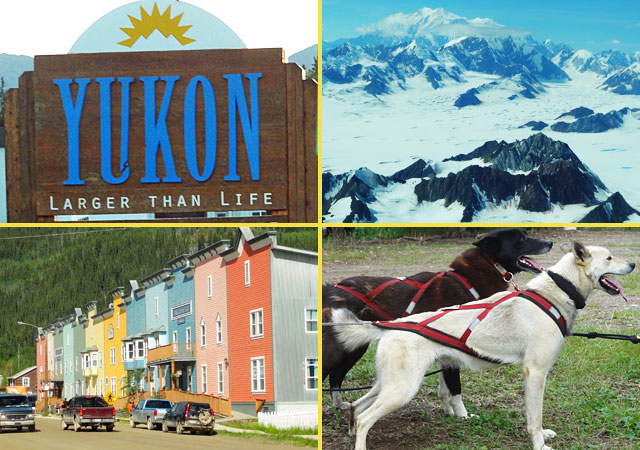 The capital and most populous city in the Yukon is a logical starting point for most trips to the region. Whitehorse has all the usual comforts and conveniences of a city, plus some unique attractions as well.

Hike the Millennium Trail to see the Yukon River up close. Tour the SS Klondike, a steamboat from 1937 on permanent display.

Another interesting attraction along the river is the Whitehorse Fish Ladder, which helps king salmon navigate the Rapids Dam to get back upstream.

On the way out of Whitehorse, stop at the Yukon Wildlife Preserve to see mountain goats, caribou, lynx, bison, moose, and other injured and orphaned animals that have found a home here.

Dawson has a lively downtown area, with town tours and Gerties Gambling Hall (Canada’s first casino) among the highlights. Be sure to give yourself at least 2-3 full days here to enjoy the city.

Near Dawson, many tourists like to go gold panning. I found a tiny speck of gold myself. Estimated value: Two cents! Some folks get lucky and find pieces that are more valuable.

Visit the Downtown Hotel to experience the Sourtoe Cocktail, a local ritual that involves doing a shot from a glass with a mummified human toe in it (really!)

Hike or drive to the Midnight Dome to see the city from above. It’s a great place to watch sunset, although if you come during the heart of summer, there will be no sunset at all since the sun doesn’t set at this latitude and elevation!

Make sure also to see the “kissing buildings,” two wooden structures built in 1901 that have shifted in the permafrost and now lean up against each other.

Other suggestions: take a river cruise, ride the river ferry, go on a dog mushing tour, visit the Dawson City Museum and the Danoja Zho Cultural Centre. Need more ideas for Dawson activities? We’ve got a full article of things to do in Dawson City, and a separate post about living in Dawson City.

Another major highlight of visiting the Yukon in summer is the chance to see Kluane National Park in all its glory. You can drive to the park and hike along its edges.

Or take a flightseeing ride on a small plane deep into the park to see its peaks and glaciers up close. The views truly make for an incredible life experience.

This road trip covers 956 miles and 18.5 hours and hits most of the Yukon’s must-see destinations. Most visitors will fly into Whitehorse. Land at Erik Nielsen Whitehorse International Airport and rent a car for your trip.

The drive from Whitehorse to Dawson is very long – close to six hours. Along the way, stop in Carmacks. There’s a small business district here with a hotel, information center, restaurant, and gas station.

Then it’s off to Dawson City. This is the most vibrant city on a Yukon road trip, so stay for a few days if possible and dig into as many of the activities mentioned as you can fit into your schedule.

If you’re able to travel into the U.S. with your rental car (check your policy), you can head west from Dawson over to the quirky town of Chicken, Alaska. It’s a town of 7 people with an outhouse and a bar!

Moving south back into Canada, the town of Beaver Creek is home to an amazingly unique creation, Sid’s Bordertown Garage and Museum. It’s a collection of artifacts he’s been accumulating for days, and it is worth the stop. 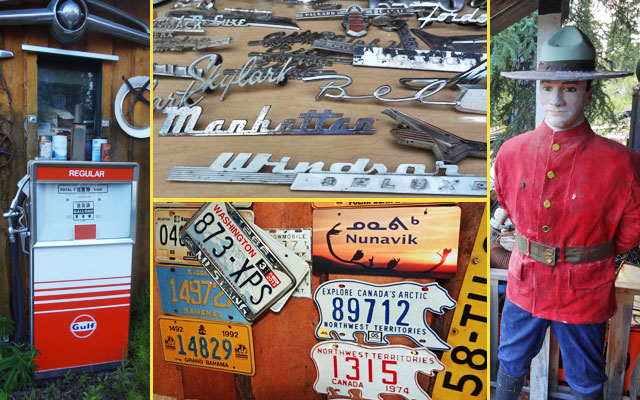 Keep your eyes open while you drive. You may catch a glimpse of wildlife, as I did when a black bear peered out from the edge of the forest. Take in the scenery of the territory as much as possible.

Head down to Haines Junction, gateway to Kluane National Park. From here, explore the park, and then head back to Whitehorse.

Note: If you have a reliable vehicle, you can drive the Dempster Highway all the way to the Arctic Ocean! It’s 573 miles and 12.5 hours to get there. You’ll be very much in remote territory, with only a couple small towns along the way, which is the appeal for many people.

Have you visited the Yukon during summer?