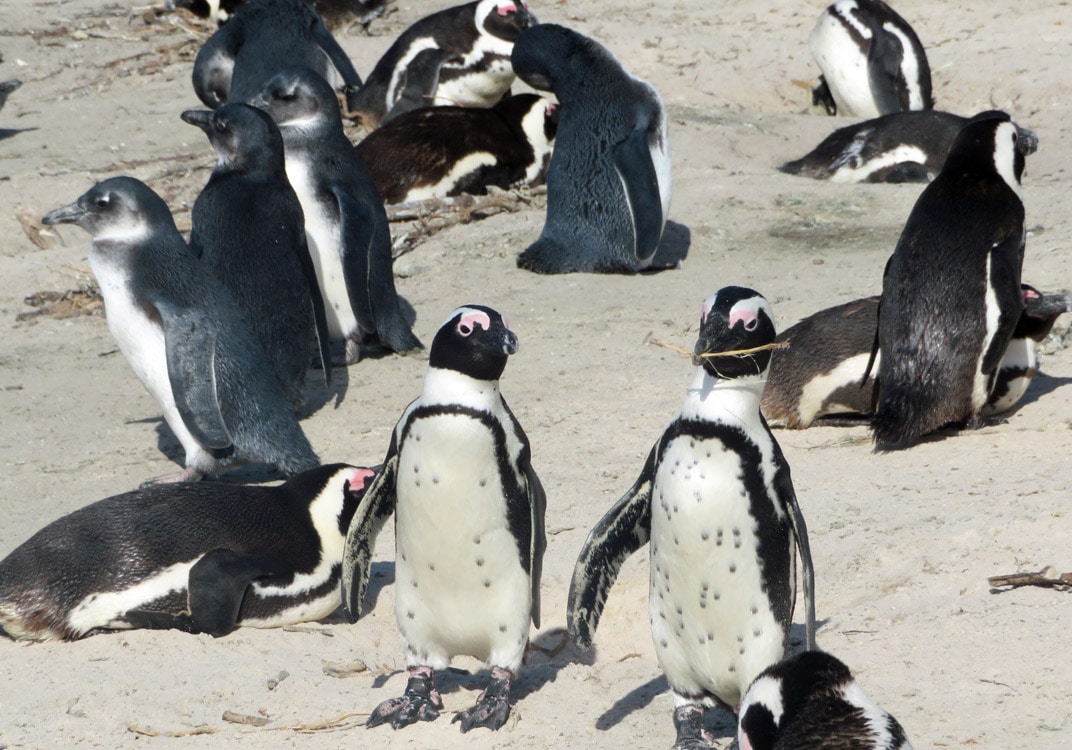 The penguins are so adorable!, my fellow tourists and I exclaimed. I can’t believe we’re seeing penguins in the wild! We watched in amusement as the penguins at Boulders Beach in South Africa frolicked in the water and waddled around the shore.

And then things turned dark.

We spotted a mischievous penguin stealing sticks from the nest of another penguin and taking them back to his own nest. How rude!

Of course, we should have known that penguins are just like every other animal on the planet, and they are not above petty theft in order to improve their living situation. At least it was just a misdemeanor, and not anything more serious!

I still consider them innocent and pure, despite the shenanigans of the animal I dubbed Fred the Klepto Penguin.

If you thought it was necessary to go all the way to Antarctica to see penguins, think again! Some warmer areas in the southern hemisphere have the tuxedo-wearing critters as well. South Africa has a colony of African penguins that hang out at this beach.

Don’t pass up the chance to see them if you visit Cape Town! Here’s everything you need to know about visiting the Boulders Beach penguins in South Africa.

Visiting the Penguins in Cape Town 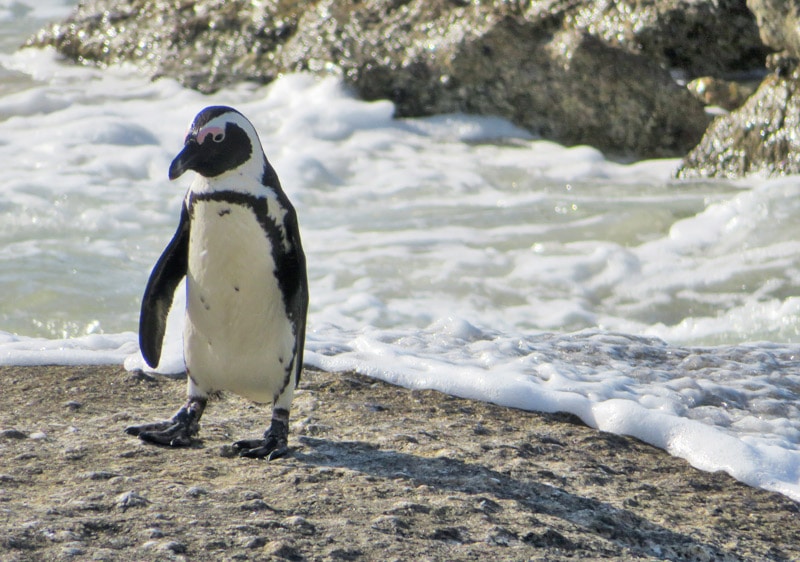 African penguins live only along the Skeleton Coast of Namibia and the western side of South Africa. They are endangered, due to overfishing and habitat destruction.

Boulders Beach is like a sheltered cove, with granite boulders (540 million years old!) creating calm inlets along the shore. The penguins settled here in 1982, realizing that the geography protected the beach from wind and strong waves. 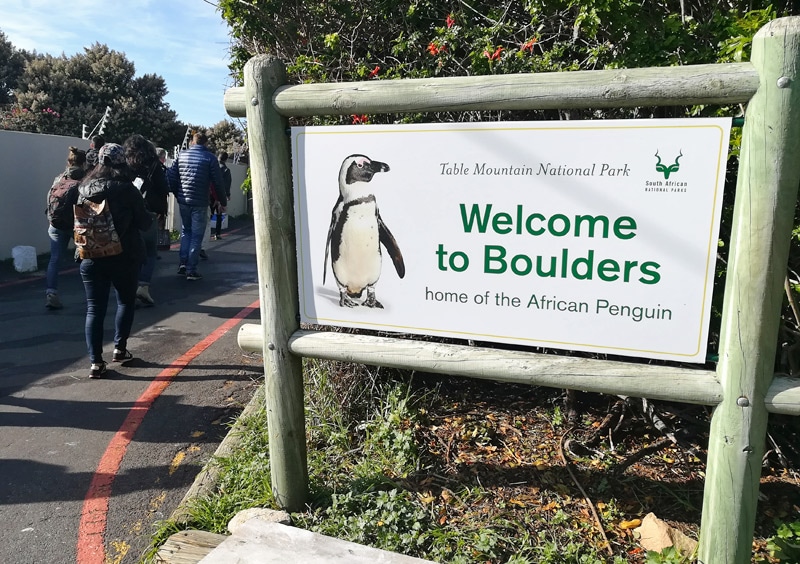 This way to see the Boulders Beach penguins in South Africa!

Roughly 2000 to 3000 birds live in the area, and they attract 60,000 tourists each year. Once you enter the grounds and pay the entrance fee, you can proceed down the boardwalk to the beach, or take the separate boardwalk that runs through a forested area just off the beach.

This section of dense vegetation is cool, because a lot of penguins have chosen to make their nests here. So you can see them hiding in the trees. African penguins are small, measuring only about two feet tall. 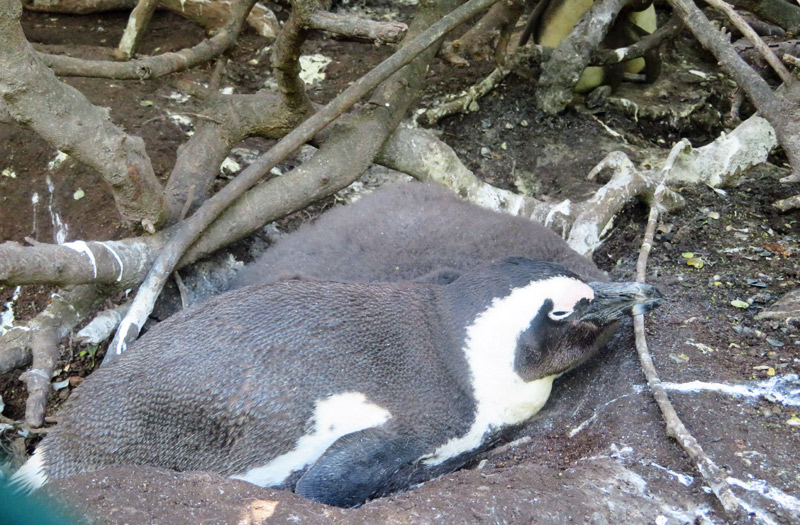 But most of the action is at the beach itself. That’s where hundreds of penguins will be waiting for your viewing pleasure. (Including Fred the Klepto Penguin.)

There are actually a couple beaches in this immediate area – Boulders Beach and Foxy Beach. Explore all three boardwalks and both beaches for the best chance of seeing the most penguins.

The penguins who choose not to nest in the vegetation just dig holes right in the sand and place sticks on top. 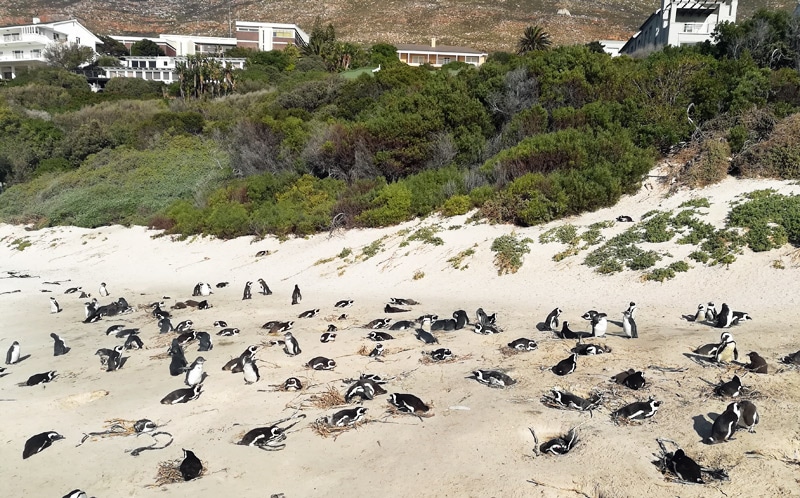 Occasionally, a penguin will even waddle through the parking lot. So keep your eyes open from the minute you arrive!

The chicks are fun to watch. Penguin chicks have soft, fuzzy fur that is more brownish than black. 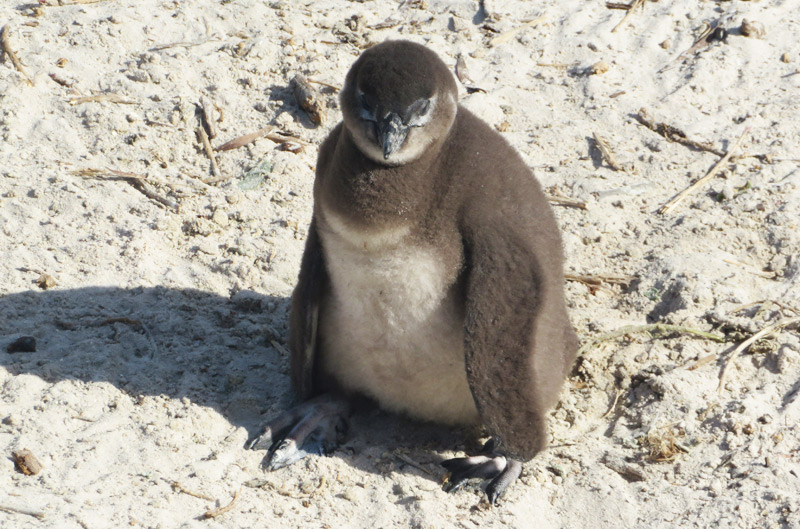 How to Get to Boulders Beach

While lots of tourists have heard about the “penguin beach in Cape Town,” Boulders Beach is actually a 45- to 60-minute drive south of Cape Town. There are no penguins within Cape Town itself.

The drive to Boulders Beach from the heart of Cape Town covers 25 miles (40 km.) It’s possible to rent a car and drive down there. You could also take the train, which runs from Cape Town down the coast to Simon’s Town. However, that requires a 3 km walk from the station to the beach. You could also Uber for around $15 USD each way. 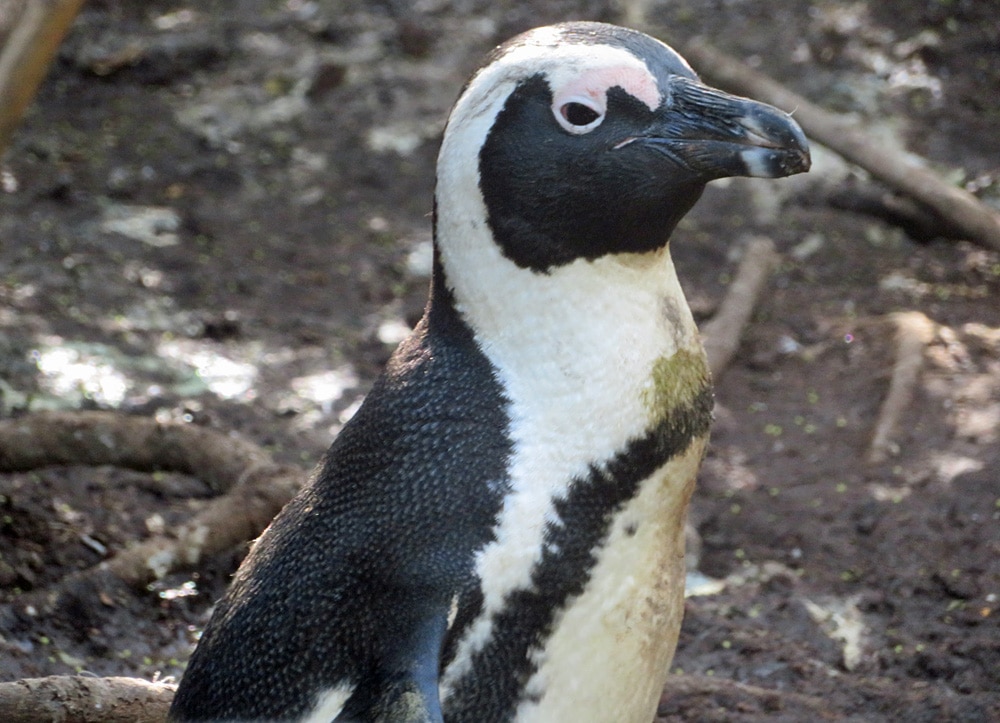 But as a tourist, the easiest way to visit the Boulders Beach penguins is to join a bus tour. You can sit and stare out the window at the coastal scenery while someone else does the driving.

Here’s the tour I took: The Cape Peninsula Tour. It’s great because in addition to stopping at Boulders Beach, it also visits the famous Cape of Good Hope, the very southern tip of this part of South Africa. The bus transportation was easy and convenient.

FAQs About the Boulders Beach Penguins in South Africa

Prior to this experience, the only times I had ever seen penguins were in captive situations, at the National Aviary in Pittsburgh and the California Academy of Sciences in San Francisco. So Boulders Beach was a thrill.

In case you’re thinking of visiting, here are the answers to a few frequently asked questions.

Is there an entrance fee to visit the penguin beach? 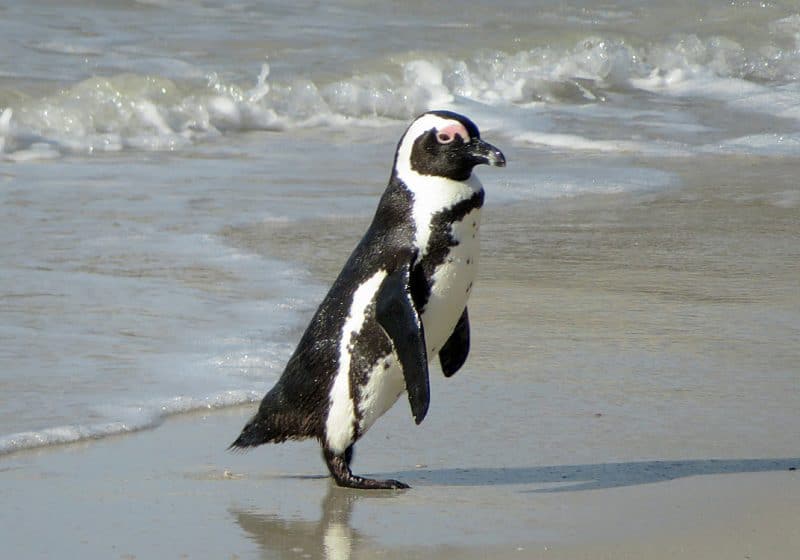 When is the best time to visit to see the Boulders Beach penguins?

Summer typically offers the most action. (Remember that summer in South Africa is December through March.) But I visited in late June and still saw plenty of birds. Go in the morning to catch the penguins at their most active.

Can you swim with the penguins?

Yes, if you come during summer when the temperature is nice and the water is warm, you can swim here just like you would at any beach. And you may find yourself eye to eye with a penguin or two among the boulders on the shore. Just don’t touch them! 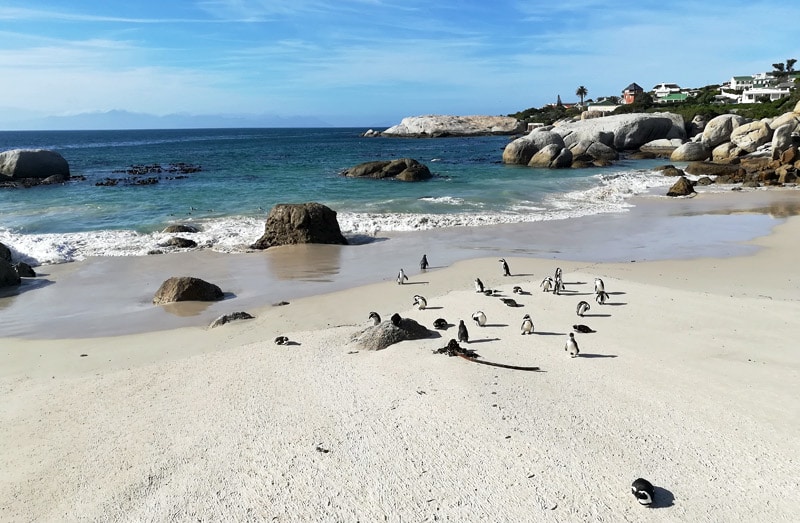 Can you feed the African penguins?

No, guests must maintain their distance. Feeding is not allowed. The park warns that penguins can be dangerous. You wouldn’t want to feel their razor-sharp bite on your finger.

Yes! There’s a wooden boardwalk that goes down to the beach, so everyone can access the penguin beach.

Is Boulders Beach a national park?

The beach is part of Table Mountain National Park, which covers wide swaths of land in Cape Town and surrounding areas. This beach is part of the TMNP Marine Protected Area, which protects the waters around the cape.

Can I kayak at Boulders Beach?

No. Because it is part of a protected area, no vessels (including kayaks and canoes) are permitted. 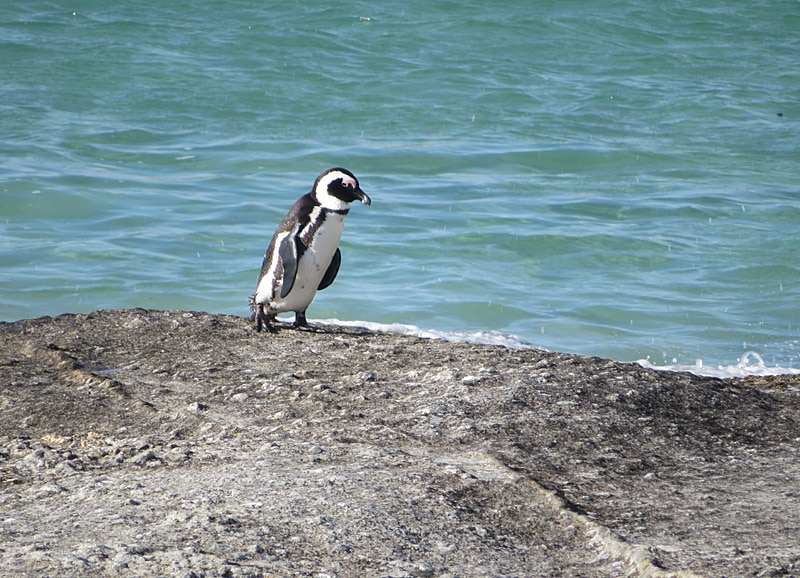 Are there any other penguins in South Africa?

As noted, they do live along the western and southern coasts of the country. Many colonies live on uninhabited islands off the coast, so it would be difficult to reach them. On the mainland, the other good spot for seeing them is at Stony Point in Betty’s Bay.

Do the Boulders Beach penguins ever have to worry about predators?

No, because they are in a protected area, and there are no lions or leopards in this part of Africa. The African penguins over at Betty’s Bay, however, have been attacked by wild leopards in the past.

The penguins in South Africa were among the 39 coolest wildlife encounters I had in Africa while traveling through 8 countries.

If You’re Going: The Boulders Beach Penguins in South Africa