Little Havana in Miami is one of the most interesting and famous ethnic neighborhoods in America, and Calle Ocho (SW 8th St.) is the center of it all. This is the place to go for a taste of Cuban culture in South Florida.

Things To See on Calle Ocho

One of the most famous spots on Calle Ocho is Maximo Gomez Park, also known as Domino Park. That’s where many of the older Cuban residents gather daily to play dominoes or checkers. 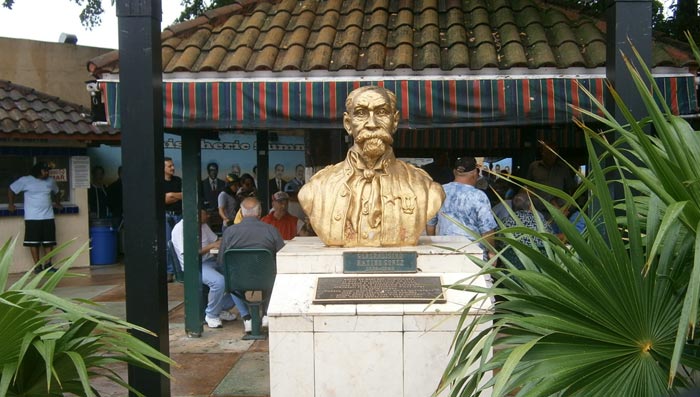 For some folks, like these two gentlemen, chess is the preferred game of choice. 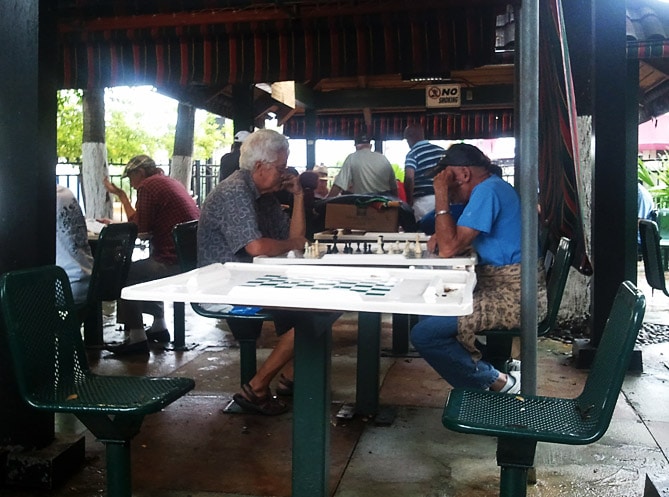 I wouldn’t say the park is a huge tourist destination, but we did see a handful of camera-wielding visitors passing by, which creates a bit of an odd scene. You have these tourists trying to get photos without being too awkward or invasive; meanwhile, you have the residents, who have been coming to this park everyday for years and have a “what’s the big deal?” attitude towards the gawkers.

Walking through some of the little shops on Calle Ocho was interesting. You can tell based on the inventory that the shops cater partially to residents and partially to tourists. They have clothing and other essentials, but they also have things like giant-sized “Cuban Parking Only” vanity license plates to hang on your wall. 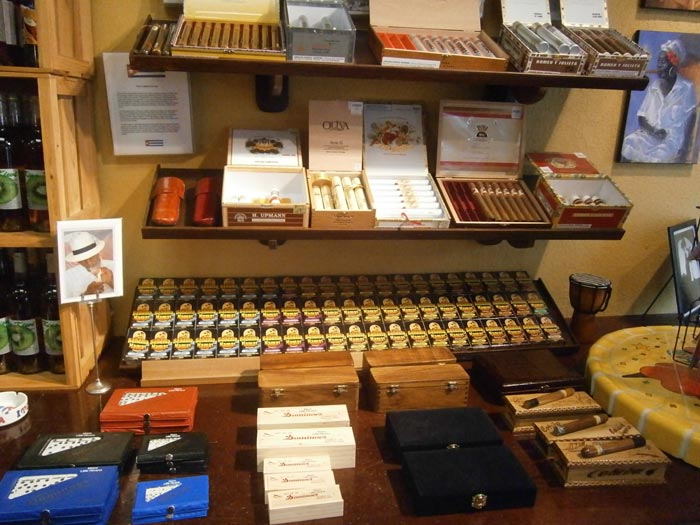 As is often the case in ethnic neighborhoods, there’s a decent amount of attractive street art. This mural honors an interesting batch of people, including musicians Celia Cruz and Tito Puente. And is that Abe Lincoln randomly in the corner? 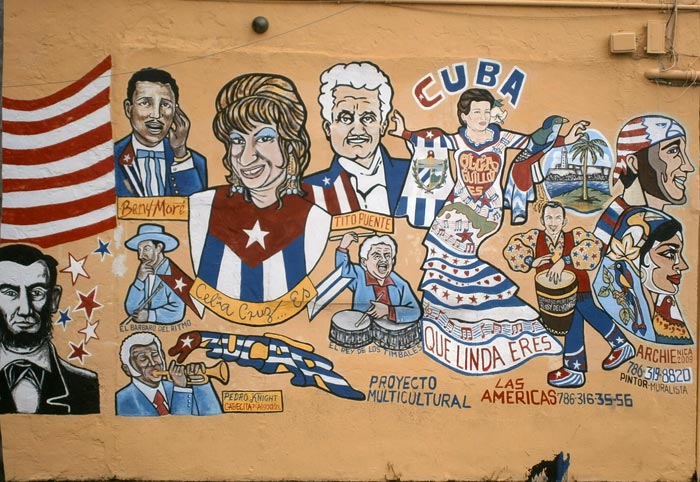 Calle Ocho has a “Walkway of the Stars” featuring stars dedicated to famous Cuban individuals. I have to confess my ignorance – I didn’t recognize most of the names. I’ve read that Gloria Estefan and Celia Cruz have stars, but the walkway stretches for several blocks, and somehow I missed theirs. 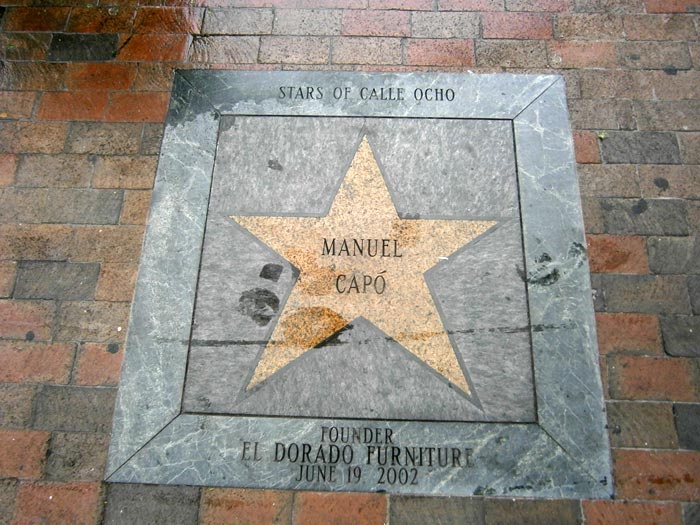 Little Havana is a lot like Key West in that there are chickens and roosters running around on the streets. Not so many on Calle Ocho, but I did see several on the back streets.

The ‘hood honors the bird with these silly statues at SW 16th Ave, in front of El Pub Restaurant, where we enjoyed a delicious lunch. These are roosters, although some people refer to them as the “Little Havana chicken statues,” since often people can’t distinguish between the two animals.

The rooster statues appear sporadically around the neighborhood. Some of them were first created as part of the Rooster Walk in 2002, and they remain because they’re so colorful and cool. 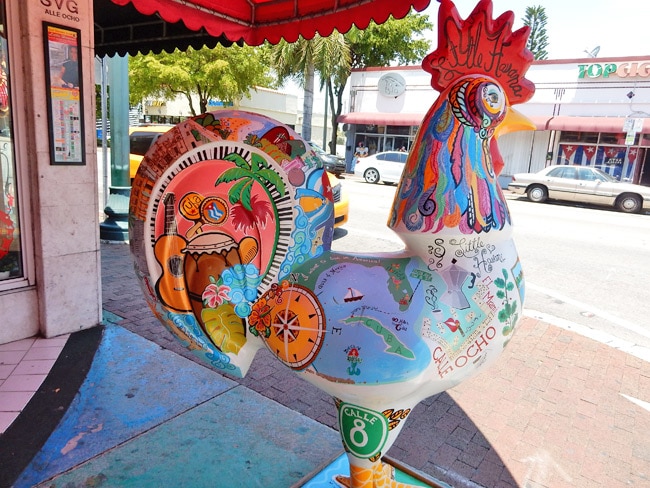 SW 13th Ave. is the home of the Cuban Memorial Boulevard Park, one of the coolest historic sights of Little Havana. The park contains statues of important figures who fought for Cuban independence. 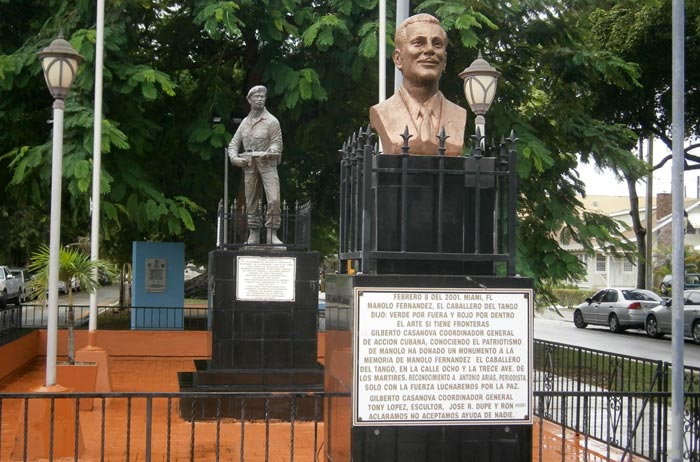 In the center of the park is an attention-grabbing statue of the Virgin Mary, which stands in front of a massive ceiba tree with its huge exposed buttress roots extending out in all directions. 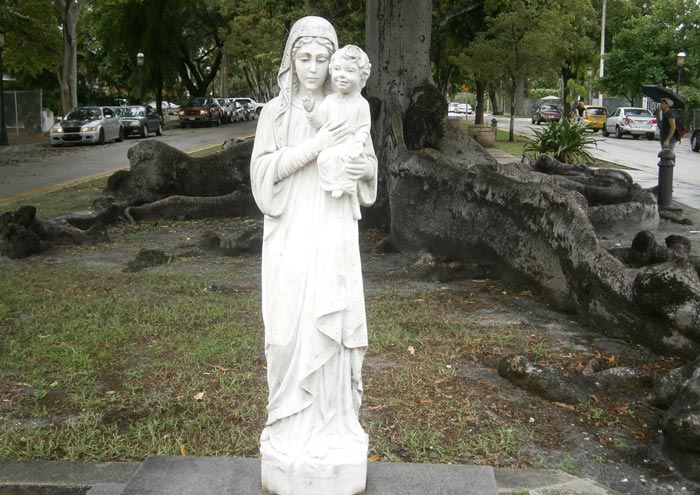 Calle Ocho in Little Havana was one of my favorite parts of my entire South Florida trip. (Much more enjoyable than when I tried to experience the South Beach nightlife!)

If you enjoy Calle Ocho, maybe next time go all the way and book a trip to Cuba! Check out our previous post: The American’s Guide to Visiting Cuba.

26 thoughts on “An Afternoon With the Roosters on Calle Ocho in Little Havana, Miami”