During long road trips, I love spending a day or two at a campground to relax, recharge my batteries and enjoy nature. The desert of Death Valley National Park is quite a different environment than most camping areas, but the national park has plenty of places to set up your tent if you’re interested in that sort of thing.

I stayed at Furnace Creek Campground in DV for a single night and had an enjoyable experience with nature, made more exciting by the howling coyotes. More on that later… 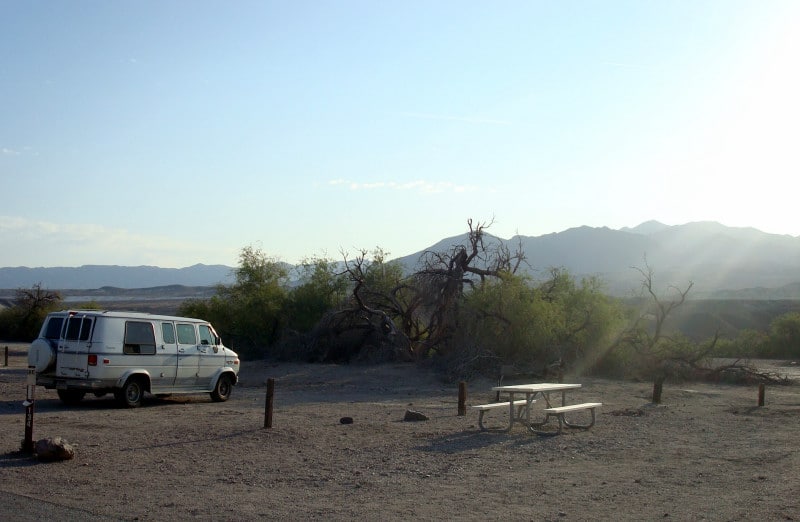 We arrived in Death Valley on a May evening and went to the Furnace Creek Campground, one of the park’s most popular. At $22/night (prices accurate as of 2019), it’s also the most expensive. (The others range from free to $16.) Furnace Creek is located at 196 feet below sea level, so if you’ve never camped below sea level, there’s the novelty aspect to enjoy. 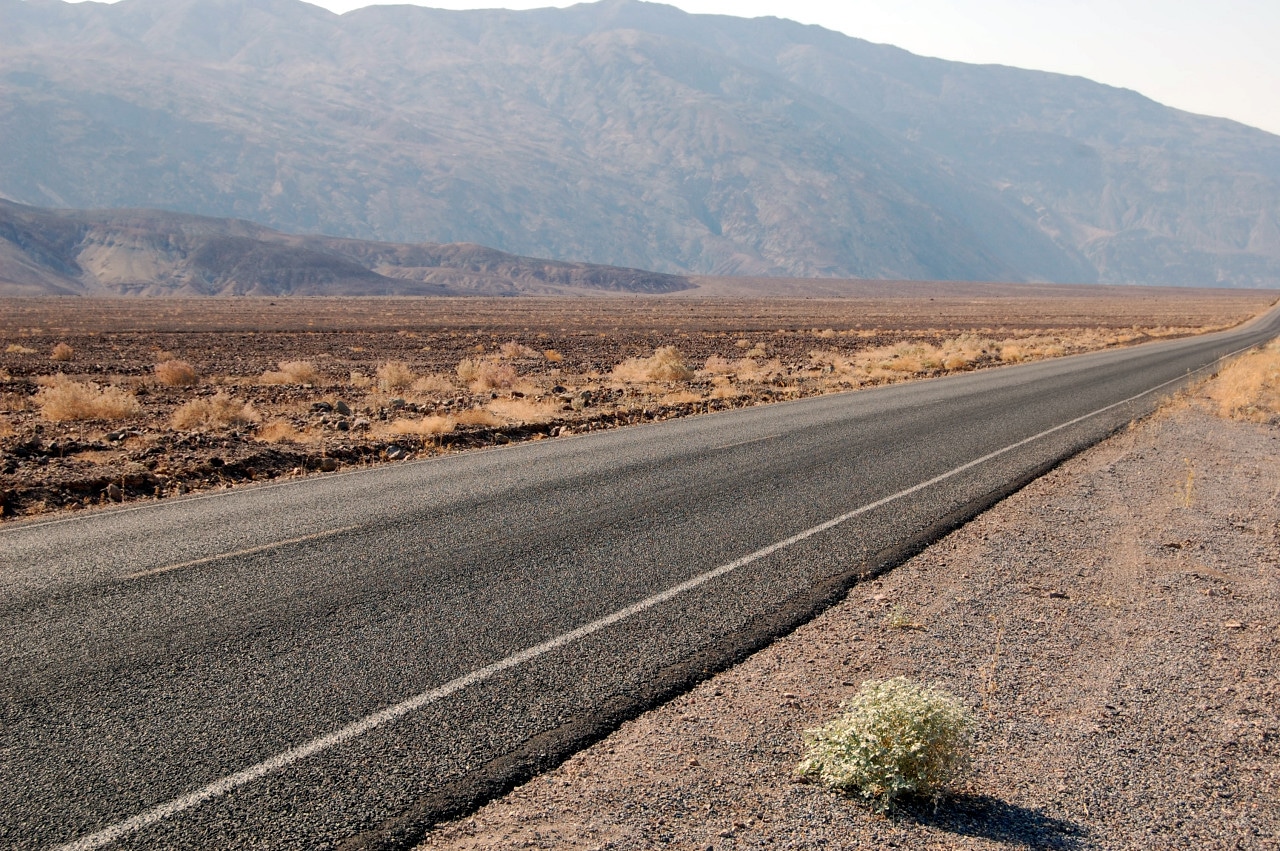 During the hot summer months, Furnace Creek isn’t manned. There’s a pay box at the entrance and everything is first-come, first-serve. I was worried my friend Jason and I might be the only ones there, but it turns out there were a couple dozen other crazies with us on that scorching night.

Like most campgrounds in DV, Furnace Creek had an indoor bathroom with flush toilets, as well as fire pits and dump stations.

Sleeping with the coyotes at Furnace Creek Campground

If you’re bringing a tent, you’d better have some padding or cushioning, because Death Valley National Park is mostly rocks, and that’s what the campgrounds look like too. There was no grass to speak of in Furnace Creek, and only a handful of trees and small shrubs.

This is what a forest looks like in Furnace Creek: 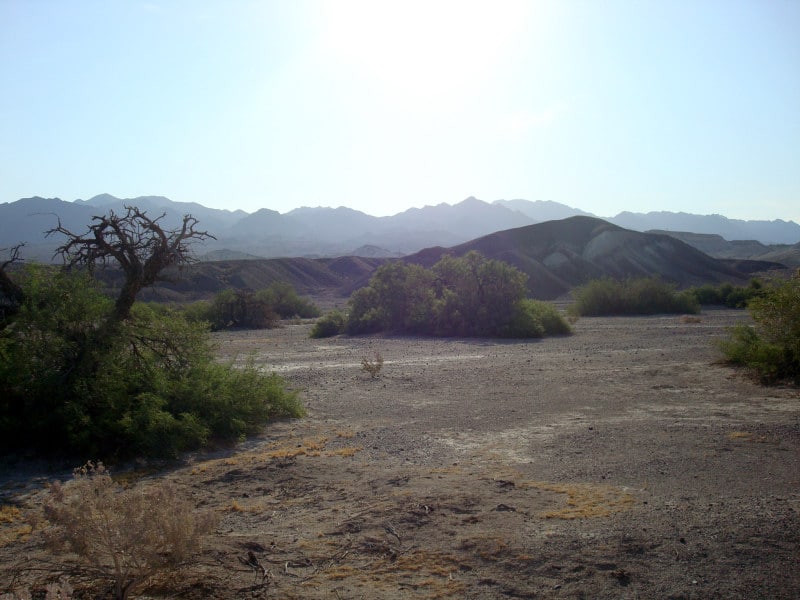 I traveled in a van with a bed in the back, but I wanted to sleep outside. Since the ground wasn’t an option, I lied down on one of the metal picnic tables. It didn’t provide the most comfortable rest in the world, but looking up at the crystal-clear, starry sky was a delight. So was the warm breeze. Although it was 101 degrees at the time, the breeze provided the perfect amount of relief.

After just an hour or two of sleep, I bolted up when I heard the howling of several coyotes. They were probably miles away, but it sounded like they were right around the corner (and approaching fast). At the time, I wasn’t sure whether coyotes were a threat to humans, so I moved into the van for the rest of the night, lest they mistake me for a rabbit.

It turns out that coyotes are generally not a threat to humans, and I probably could’ve slept outside all night if I hadn’t been so afraid. Sadly, though, my fears were tragically vindicated just a few months later when a Canadian singer was attacked and killed by coyotes, making her the first adult killed by coyotes in North America in recorded history.

I can’t speak with authority about any of the other DV campgrounds, since I didn’t get a chance to stay there. But the chance to sleep under the stars in such an unusual place, while hearing the howls of coyotes, is something I would highly recommend.

Plus, it’s fun to put on your warmest clothes and mock the 100+ degree temperatures. 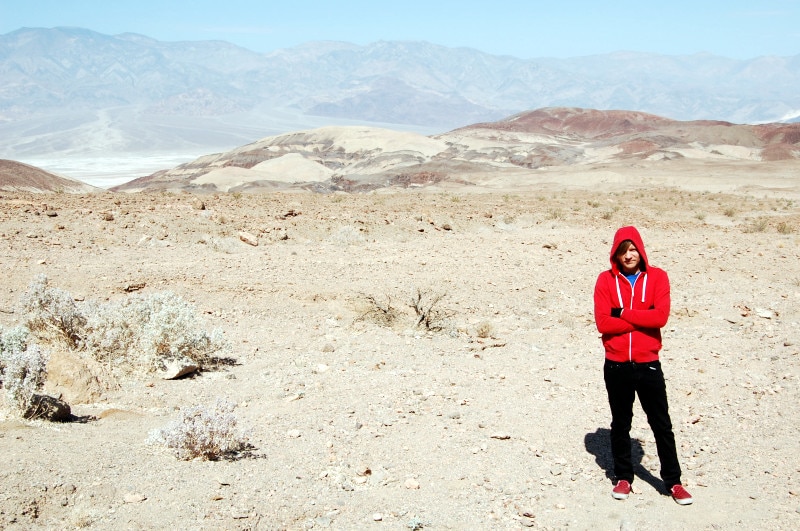 Only four of the nine campgrounds are open all year: Furnace Creek, Wildrose, Mesquite Spring, and Emigrant. That last one accepts tent campers only, no RVs. Furnace Creek accepts reservations from October 15 to April 15. The rest of the year, it’s first-come, first-serve. Backcountry camping is also permitted in the park.

Furnace Creek is a good place to stay since it’s within decent proximity to the park’s other highlights, like Badwater Basin. And you can always head out of the park to visit the creepy ghost town of Rhyolite, Nevada nearby!