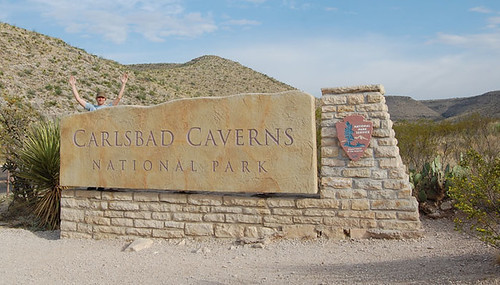 I love national parks, but as amazing as they are, I wouldn’t usually describe them as “quirky.” Carlsbad Caverns is an exception. This place is freaky. The limestone cavern goes 750 feet down into the ground, with all sorts of odd formations of stalagmites and stalactites.

Read on as we answer some frequently asked questions about visiting Carlsbad Caverns, this awesomely strange place. 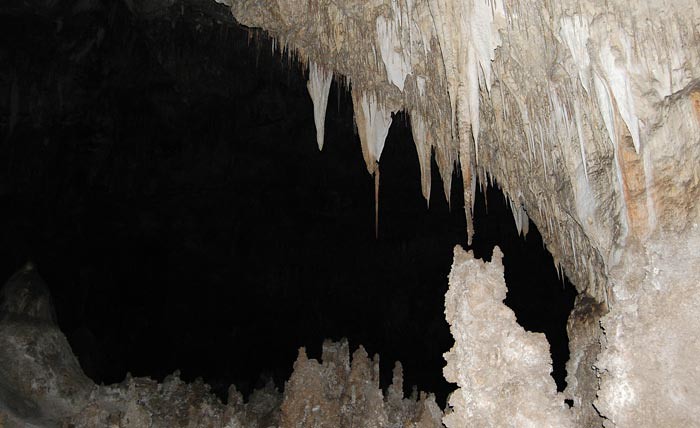 Carlsbad Caverns is situated in the town of Carlsbad, New Mexico. It’s very near the Texas border, and within a couple hours’ drive of White Sands National Park and the alien-crazed town of Roswell, New Mexico.

It’s in the Guadalupe Mountains and covers more than 46,000 acres. It has been a national park since 1995 and attracts roughly half a million visitors per year.

From El Paso to Carlsbad Caverns, you’re looking at about 149 miles and a 2.5 hour drive. The official mailing address is: 3225 National Parks Highway, Carlsbad NM 88220. 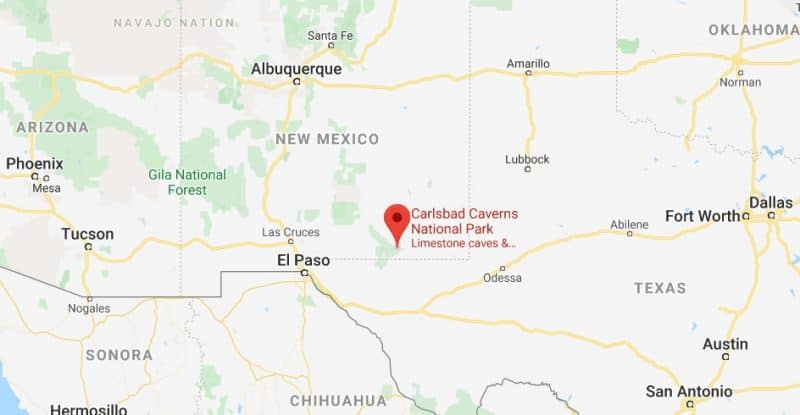 What is the best time to visit Carlsbad Caverns?

You can visit any time of year, but the winter months (Dec – Feb) have cooler temperatures, with daily highs averaging about 60 F (15 C.) By contrast, from May to September, daily highs are in the 88 F (31 C) range. The good news is that the caverns are well-insulated underground, so the outdoor temperature really doesn’t matter at all.

During the summer, visiting hours in the caverns are extended, so that’s another reason to come between May and September. 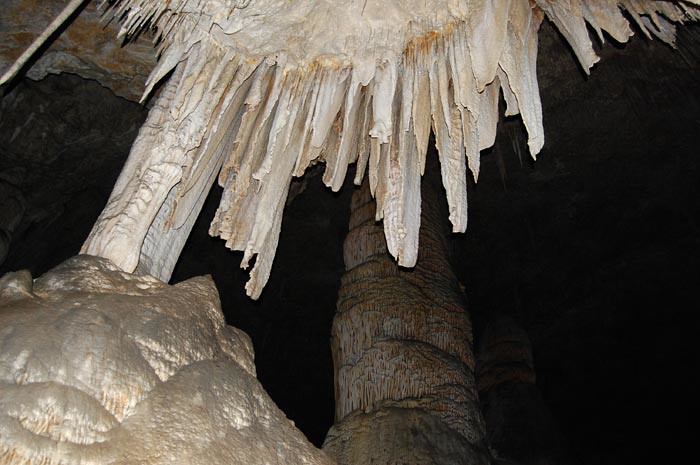 Where are the visitor centers?

There’s only one visitor center in this national park. The signs and/or your GPS will guide you directly there. You’ll find a modest selection of exhibits, a gift shop, and a restaurant.

Visiting Carlsbad Caverns: What to wear

As mentioned above, outdoor temps in this part of New Mexico fluctuate by season. But the temperature inside remains a constant 56 degrees F (13 C.) It’s humid since water is dripping in various parts of the cavern.

With that in mind, I’d recommend bringing the following: Comfortable walking shoes (such as hiking boots), a windbreaker jacket, and a hat or cap. That’s it, nothing too complicated. If you wear flip flops or sandals, you can still do the cavern, but you’ll want to take the elevator instead of walking down. Also don’t forget a good camera with flash!

Here’s the lightweight windbreaker jacket I recommend. It’s unisex and comes in sizes ranging from X-small to 5XL, so it’s appropriate for everybody: men, women, and children.

There are no campgrounds inside the national park. If you’re adventurous, you can backcountry camp inside the park near some of the hiking trails. You’ll need to request a free permit and follow all park rules.

Where to stay near Carlsbad Caverns

Lodging options near Carlsbad Caverns are limited. They include:

White’s City Cavern Inn. The closest lodging to the national park, about 7 miles from the visitor center.

Karbani Inn. About a 30-minute drive from the park, this is a basic hotel with wifi, a/c, and free parking.

Further into the heart of Carlsbad, you can also find affordable chains like Motel 6, Quality Inn, Super 8, Days Inn, and Rodeway Inn.

Which routes can you take down into the cavern?

When you decide to visit these caverns in southern New Mexico, you have to decide which path to take. You can take the elevator down into the Big Room or the Kings Palace room, or you can take the Natural Entrance route, where you follow an established, winding paved path down to the bottom. 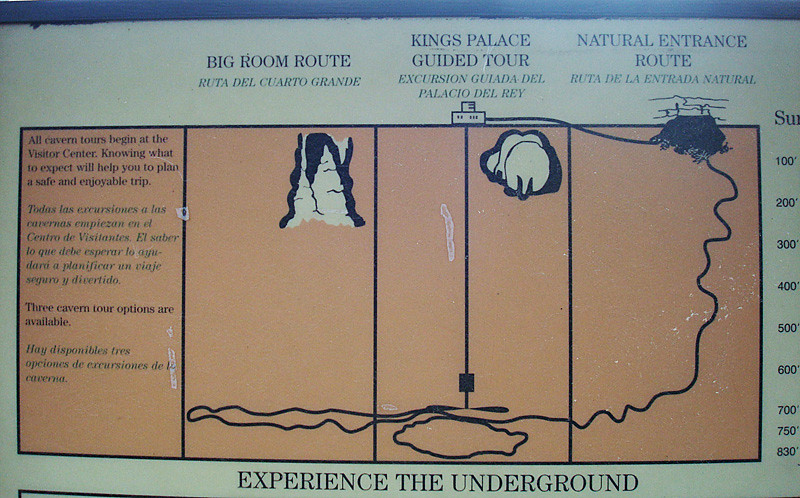 We opted for the natural walking route. The entrance was intimidating as we saw the dark cavern awaiting us. 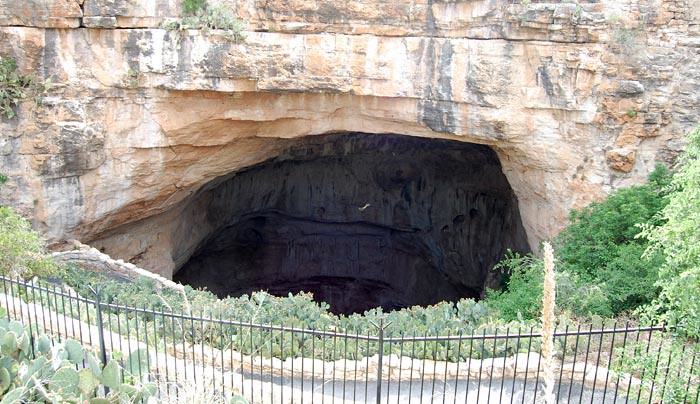 Once you get a few feet in, the light disappears and you are guided only by dim lights along the path. 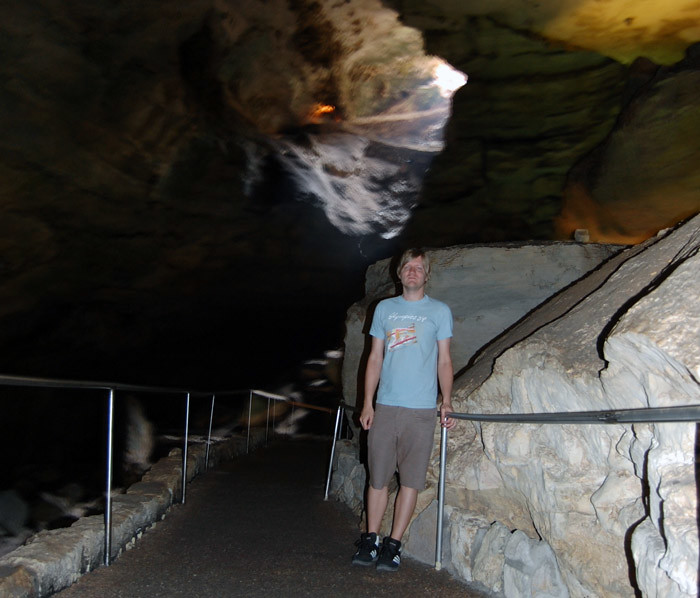 You’ll have railings and sidewalks to guide you all the way to the bottom. If you are in good health, I’d recommend taking the walking route down. You can always take the elevator back up!

What is the Big Room?

Also known as the Hall of Giants, the Big Room is the largest cavern in the park. This limestone chamber is more than 30,000 square meters and includes popular features such as the Bottomless Pit and the Giant Dome. 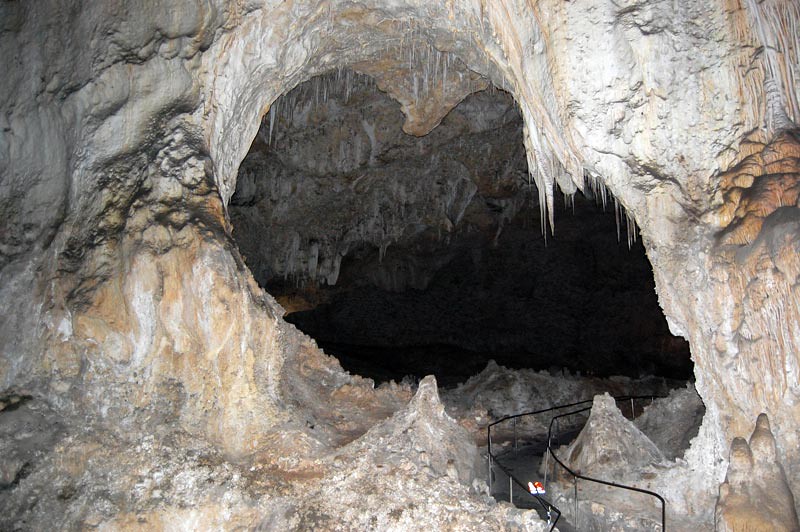 If the Big Room appeals to you, consider visiting the world’s largest cave system, Mammoth Cave National Park in Kentucky.

How can I see the Carlsbad Caverns bats?

Every evening during summer as the sun sets, thousands of bats emerge from the cavern. This bat flight is incredible to witness and is similar to the bridge bats of Austin that come out every night.

We visited in the morning, so there weren’t a huge number of bats. But when we went inside and looked back up, we could still see a few dozen bats flying around at that time of day.

What’s the deal with the Carlsbad Caverns cafe?

There’s a cafe in the basement where they advertise that you can “Eat lunch 750 feet underground!!” When I visited, the food looked shoddy – it was mostly cold sandwiches and perhaps food you could microwave. We chose to eat decent food above ground rather than settling for that stuff 750 feet down.

In summary, visiting Carlsbad Caverns National Park was a great experience. It was really impressive to see formations that are thousands of years old. 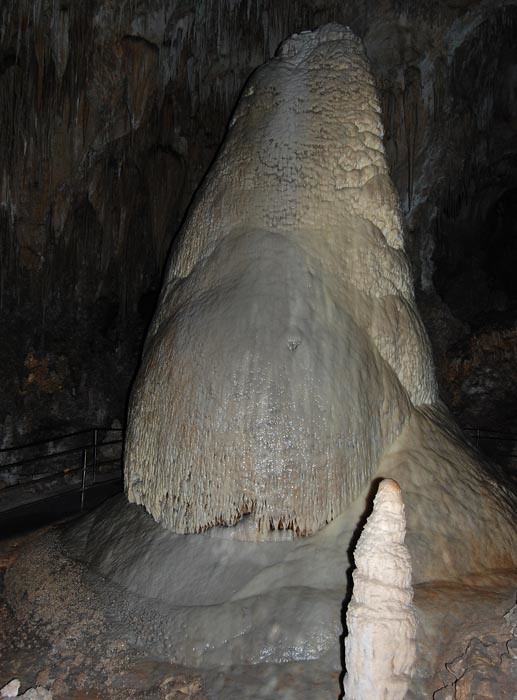 Carlsbad Caverns was a fun place to visit and a nice cool environment in the middle of the desert. Would you like to visit this park?