Chicago has a ton of museums, so many that I haven’t gotten around to visiting all of them yet. Here’s my Chicago Museum Guide, in the form of a concise rundown of a handful of my favorites. For more photos of the museums and exhibits, check out last week’s photo essay, “Chicago in 100 Images.”

Most of these museums are closed on Mondays. All five allow photography (in most rooms) and offer at least a few “free days” throughout the year, so plan your visit accordingly.

The Field Museum of Natural History

As you walk into the Field Museum, you’re greeted by Sue, the most complete Tyrannosaurus Rex skeleton ever found. She’s 42 feet long and 67 million years old, and she was discovered near the Black Hills of South Dakota. 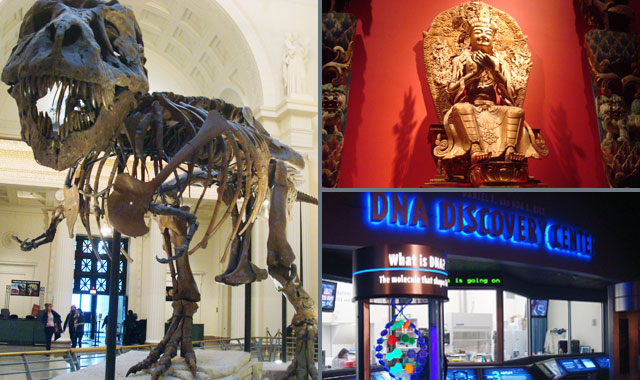 Move on and you’ll encounter a “Nature Walk” that shows displays of animals in various habitats around the world, an Ancient Egypt section with mummies and a reconstruction of an elaborate ancient tomb, a DNA laboratory, and exhibits depicting different cultures of people around the world.

There’s an “Evolving Planet” exhibit that tracks the ways the world has changed over the past 4 billion years. In these polarizing political times, I was almost surprised to see such an exhibit – I would have expected that extremists would have protested it out of existence.

One of the most sobering displays is an electronic display that reads, “Number of species that have gone extinct since 8:00 this morning,” with a numeral behind it. When I visited in late afternoon, the number at that time was 39.

Founded in 1982 and totally free to the public since 1987, the National Museum of Mexican Art is one of the city’s coolest museums. Hop on the Pink line and head to the Pilsen neighborhood to check out an appealing collection of visual works. 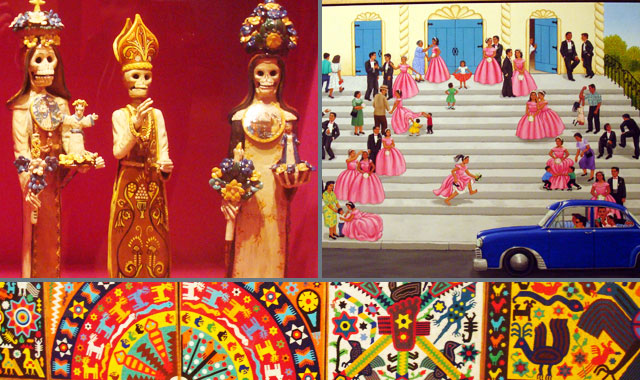 This establishment is a bit smaller than the rest on this list, but it’s packed full of entertaining exhibits. “Mexicanidad: Our Past is Present” is a permanent collection that takes visitors through the history of Mexico from the early explorers to its current residents. Other rotating collections often focus on photography.

Captions are presented in English and Spanish. The art here is revealing, educational, colorful, and full of detail, and through it you can learn the story of a group of people. The museum holds special annual programs for holidays like Dia del Niño and Dia de Los Muertos.

I’ve mentioned before my love of modern art, because you can construct pretty much anything and call it art, whether it’s wheelbarrows full of popcorn and Christmas bulbs, mirror tiles stacked together to create a “funhouse” effect, a giant pile of haphazardly-arranged rocks, or video clips projected into barrels full of water. 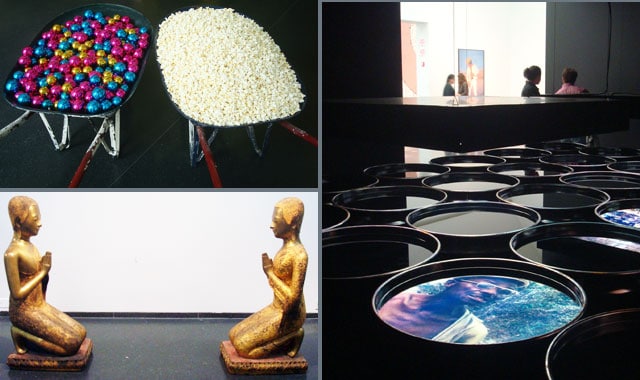 The MCA only features art created after 1945 and emphasizes surrealism and minimalism. The museum is also well-known for the sharp geometric angles of its long staircase, which ends in a full of giant goldfish at the bottom. You’ll want to bring your camera for sure.

I’m generally not a fan of museum gift shops, but MCA has perhaps my favorite, with a lot of unique and quirky items. The last time I visited, they even had small plush microbes in the shape of dangerous viruses. If you’re looking for a gift to get people talking, you can’t go wrong with a stuffed animal in the shape of “Herpes” or “E. coli!”

Since opening in 1933, Chicago’s Museum of Science & Industry has hosted more than 1.75 million guests. The Hyde Park building covers more than 400,000 square feet, which allows it to house a huge Transportation Gallery containing vintage planes, which range from British and Nazi aircraft from World War II to a Boeing 727 United passenger airplane. 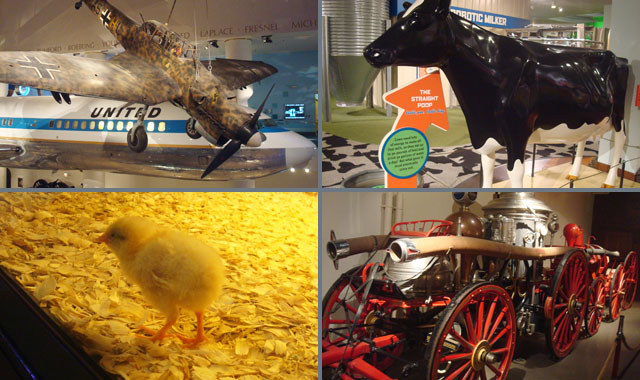 You’ll find a German submarine captured during WWII, old steam locomotives, and model ships showing how marine transportation has changed over the years. There’s a Space Center, a Baby Chick Hatchery, a Coal Mine Shaft, a farming technology display, and the largest pinball machine in the world.

And those are just the permanent displays. Current temporary exhibits include The Hidden Life of Ants and an interactive Mythbusters “Explosive Exhibition.”

The Art Institute of Chicago

The Art Institute is where you’ll find the classical paintings you used to read about in Humanities class. Monet, Renoir, van Gogh… all the biggies are here. You can see Georges Seurat’s ‘A Sunday Afternoon on the Island of La Grande Jatte’ – for those who aren’t art geeks, that’s the 1886 painting composed of thousands of tiny dots depicting families in a park and women holding umbrellas. Also at AIC is Grant Wood’s ‘American Gothic’ – the colonial couple with the pitchfork. 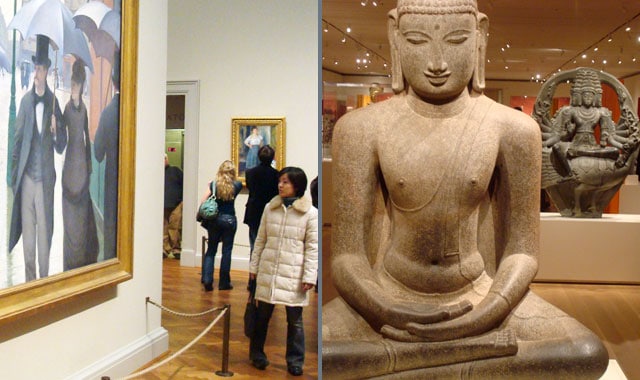 Be sure to give yourself plenty of time for a visit. At one million square feet, the Art Institute is the second-largest art museum in the United States, behind only NYC’s Metropolitan Museum of Art. The AIC used to be free to all visitors on Thursday evenings, but the free time slots have now been reduced to the first and second Wednesday of each month, and only for Illinois residents.

Which of these Chicago museums would you most like to visit? Leave a comment and let me know!