Chicago has so much incredible culture and so many fun activities that sometimes visitors can overlook some really cool stuff. Like Oz Park, the Bloomingdale Trail, the Doughnut Vault, and Christkindlmarket.

So after you’ve downed your deep dish pizza, checked out Chicago’s improv comedy scene, visited The Bean, and taken the famous architecture boat tour, consider checking out some of these cool Chicago spots that may not be on your radar. 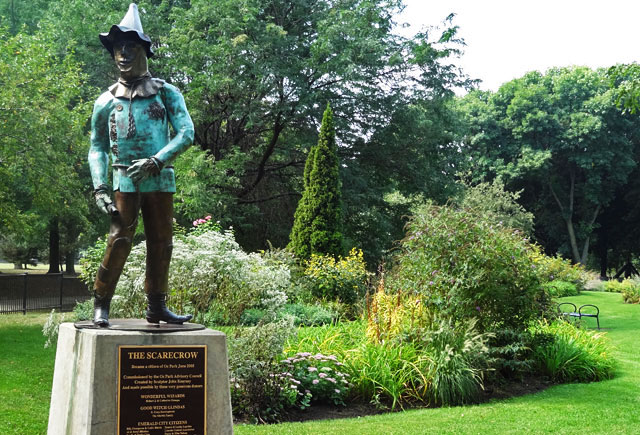 A lot of parklets around Chicago have statues of historic figures like Abe Lincoln and Ulysses S. Grant. Oz Park is way cooler.

Here you’ll find Dorothy, Toto, the Scarecrow, the Tin Man, and the Cowardly Lion. See, you don’t have to go all the way to Kansas to find the world of Oz! The Wonderful World of Oz was written in Chicago in 1900 by L. Frank Baum, so honoring the story with a local park makes sense. 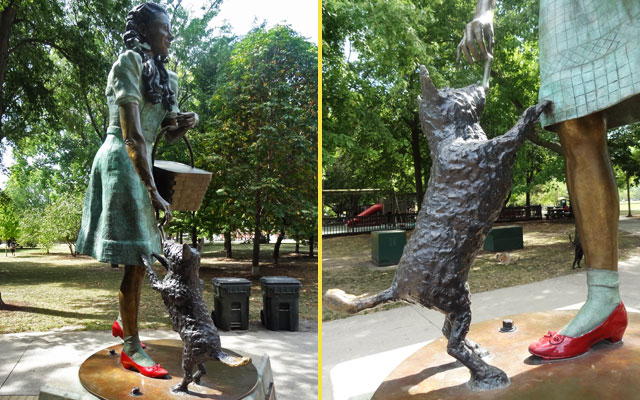 The statues were created over the past 20 years by artist John Kearney. First up was the Tin Man, which he made from chrome car bumpers. In 2001 came the Lion, followed in 2005 by the Scarecrow and in 2007 by Dorothy and Toto. Those three sculptures were created from bronze. 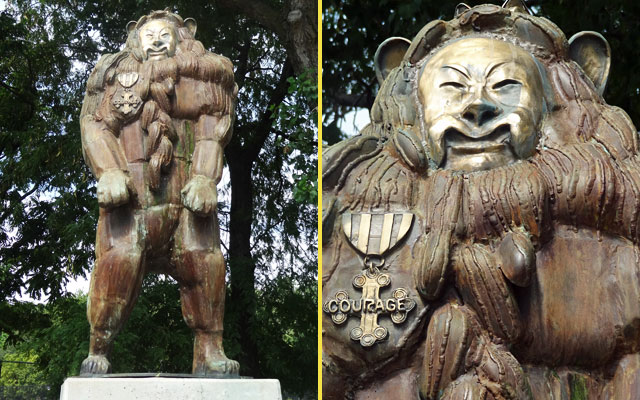 The Tin Man is the most interesting piece because of the way it was made. The statue is nine feet tall and weighs 900 pounds. Kearney was once known for making art out of chrome bumpers, but he has stopped since those old chrome bumpers are obsolete these days, making the Tin Man one of his last bumper works. 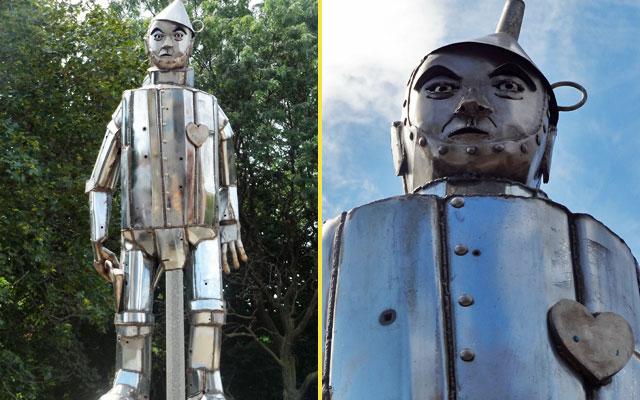 Kearney was finishing up the Tin Man sculpture when a small girl wandered past and wondered why he didn’t have a heart. Realizing he had forgotten an important element of the character, the artist added a chrome heart to the sculpture.

Will there be any more Oz statues coming? Who knows, but personally, I’m holding out for a Wicked Witch.

Aside from the Oz statues, Oz Park is a pretty normal Chicago park, with tennis courts, baseball fields, a garden and park benches. They also show movies here in the summer. One of the selections this year was The Wiz, the 1978 reworking of the Wizard of Oz story that starred Michael Jackson and Diana Ross. 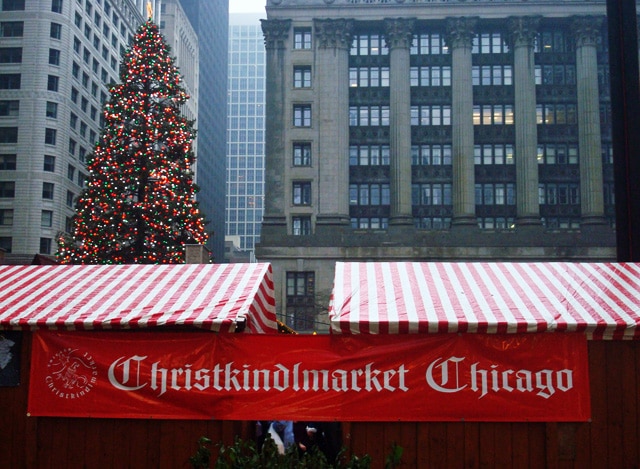 If you’re in the Windy City this holiday season, consider stopping by Christkindlmarket, a free open-air event in downtown Chicago.

The festival features giant Christmas trees, life-size nativity scenes, lots of German food like bratwurst and pancakes, and vendors selling their hand-made wares. My favorite are the Christmas tree ornament shops, which sell Chicago-themed bulbs, including one shaped like the Bean. I must purchase one of those for my own tree.

Christkindlmarket runs every day through December 24. This German market is a big part of the reason why Chicago is one of the best Christmas vacations in the U.S. 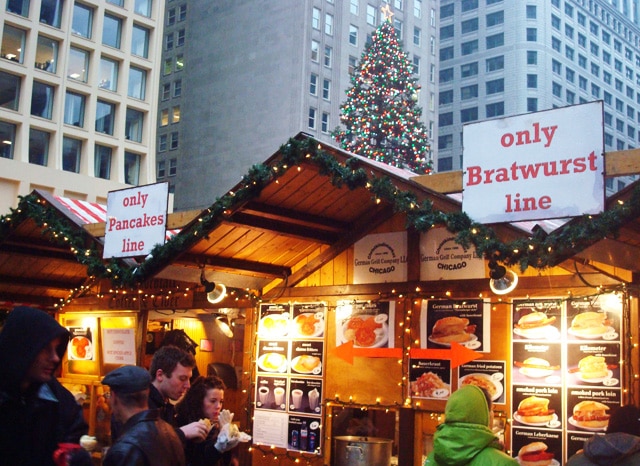 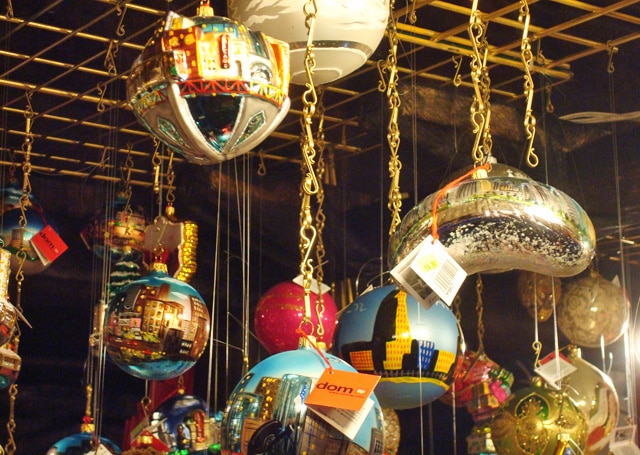 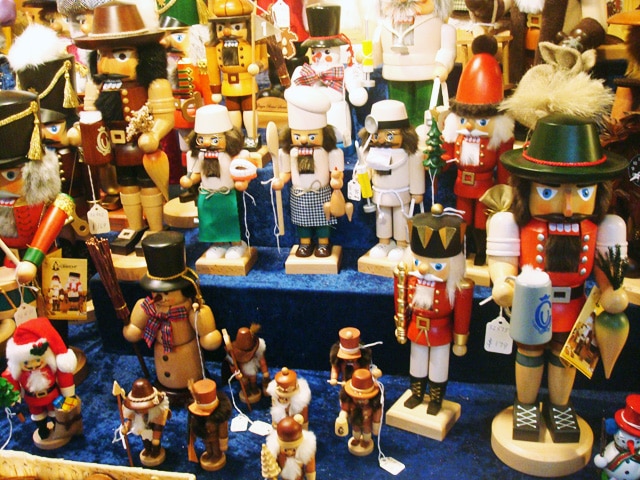 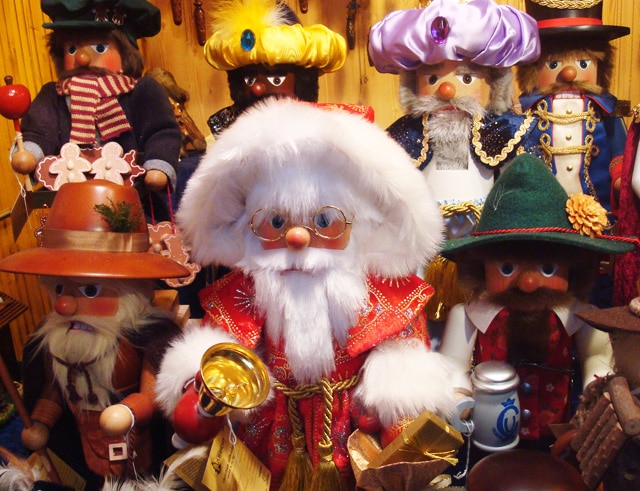 Is any donut worth waiting in line for an hour? The answer is yes to many Chicagoans and tourists who stop at the Doughnut Vault each morning for flavors like pistachio, gingerbread, powdered sugar, mocha glazed, lemon poppy seed, pineapple, birthday cake, and carrot cake.

Only a handful of these flavors are available each day, so you never know what you’re going to get unless you follow the Vault on social media. 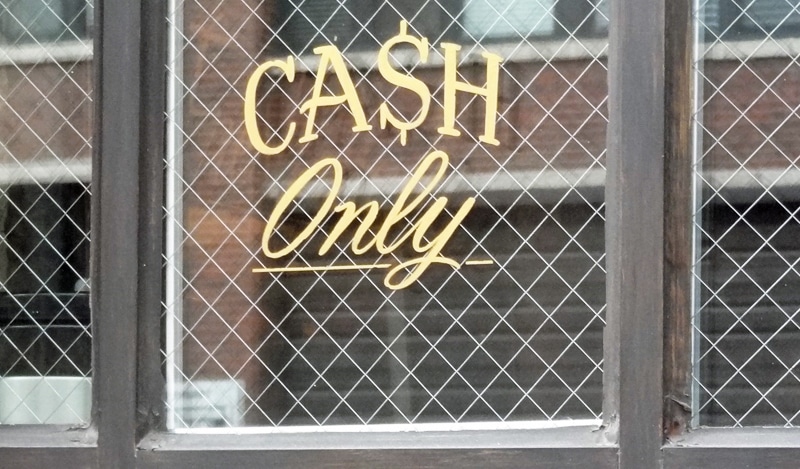 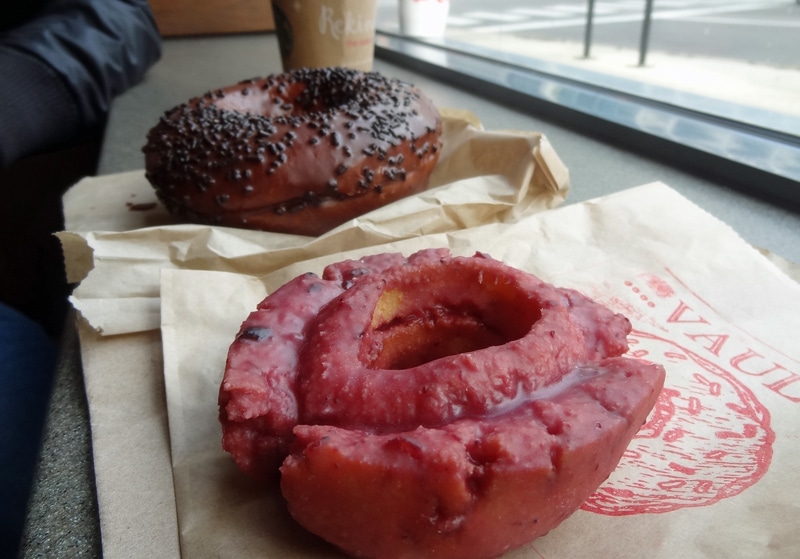 Created by Brendan Sodikoff, who also operates Gilt Bar, Au Cheval, and a number of other restaurants around town, the Doughnut Vault is one of my favorite Chicago food options.

Where else can you get a chocolate sprinkle donut the size of your face? The blueberry old-fashioned donut in the center is about standard size. Compare that to the glazed and chocolate donuts. They’re all soooo delicious. 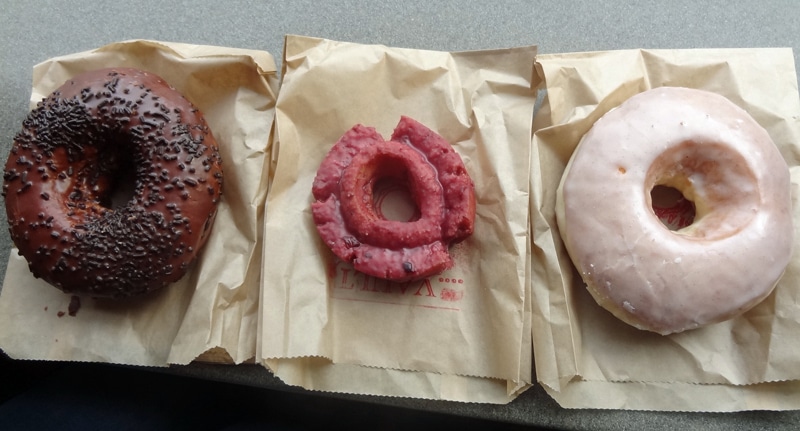 Because the Doughnut Vault is located in such a small storefront, you’ll most likely have to wait in line for a while if you go during peak hours. If you’re having trouble finding the place, just look for the line down the street. 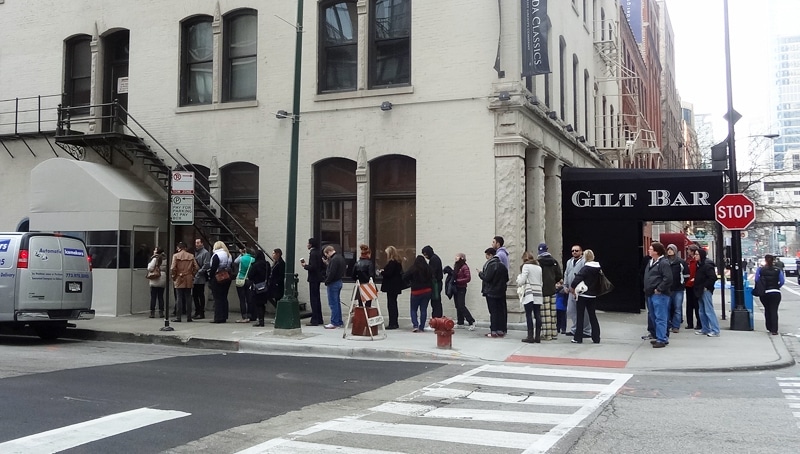 Once inside, you’ll see why the line is so long: Because this place is tiny. The store is located inside a former bank vault (hence the name “Doughnut Vault.” See what they did there?) There’s room for less than a dozen people inside. 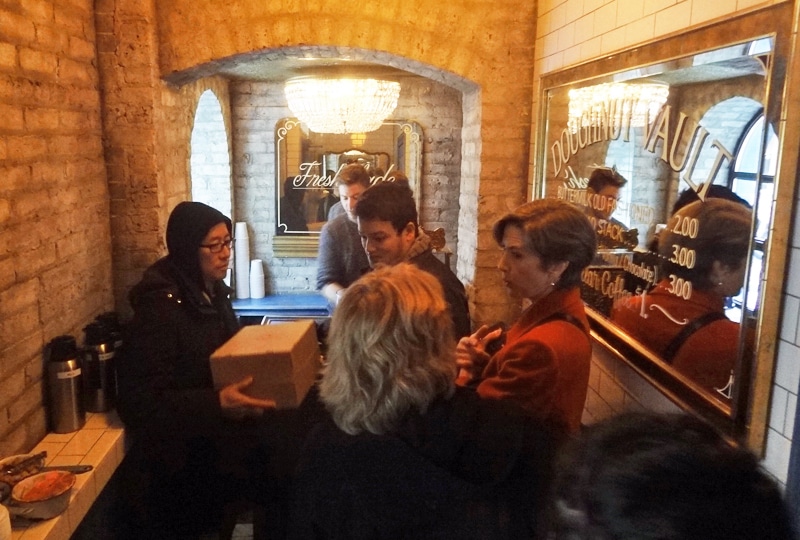 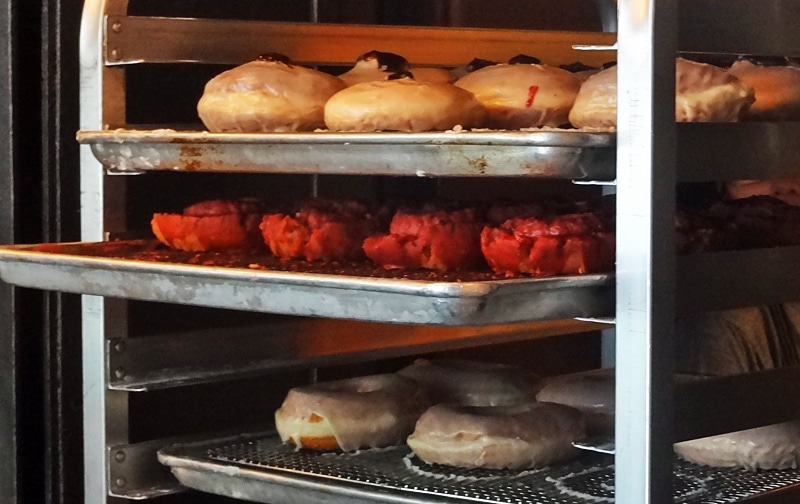 The Doughnut Vault makes its snacks fresh every morning, and once they’re gone, they’re gone. The store opens at 8 am from Tuesday through Friday and at 9:30 on Saturdays. Follow the store’s Twitter page for constant updates on how many of each flavor remain and how long the line is. 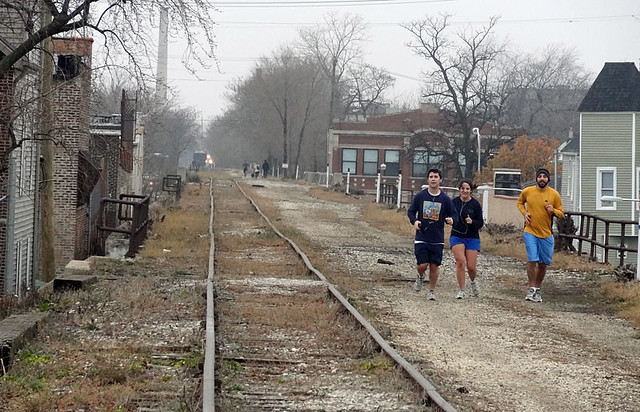 The Bloomingdale Trail was an abandoned rail line on the city’s northwest side. Unlike the High Line in New York City, which has been completely restored and designed for public use, the Bloomingdale Trail has not seen a single dollar in renovation. In fact, it’s technically illegal to even go up there, but that law is not enforced, since the police have better things to do.

Signs tell visitors they’re not supposed to go up there. But people do all the time, to the point that there are 36 Yelp reviews of the trail, and I’ve never heard of anyone getting in trouble for going up there.

On a nice day, you’ll see lots of runners and folks walking their dogs, trying their hardest to avoid the broken glass and random holes in the ground that you’d expect to find on untouched land.

The good news is that the city has finally realized how much potential the Bloomingdale Trail possesses, and they’re in the early stages of fixing up the old rail line into a proper walking and biking path.

Once you get up there, you’ll have easy access to views of the Chicago skyline, neighborhoods like Wicker Park and Humboldt Park, and some of the city’s most interesting street art. 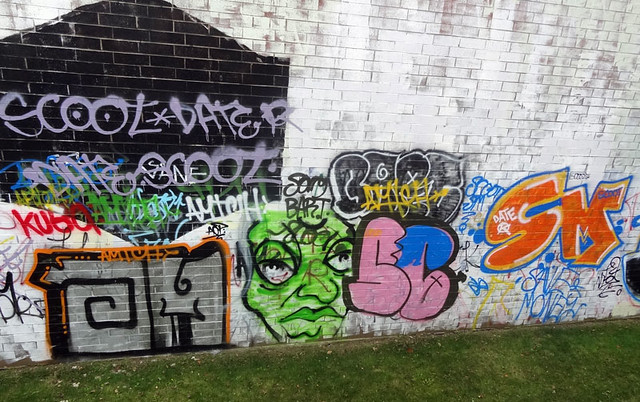 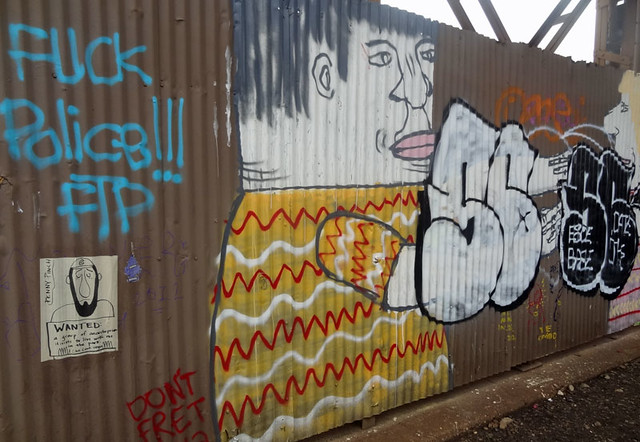 The path, much like the city it resides in, is a little rough around the edges but has a lot of character and charm. It’s not paved, so watch your step. You may even see occasional evidence of a former or current homeless encampment. 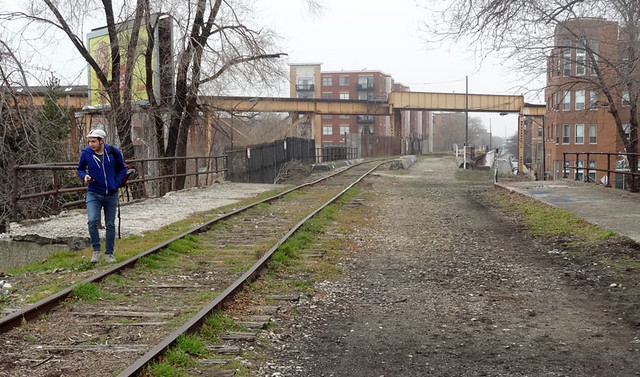 The sights include up-close views of the blue line train, neighborhood apartments, and the streets of Humboldt Park. 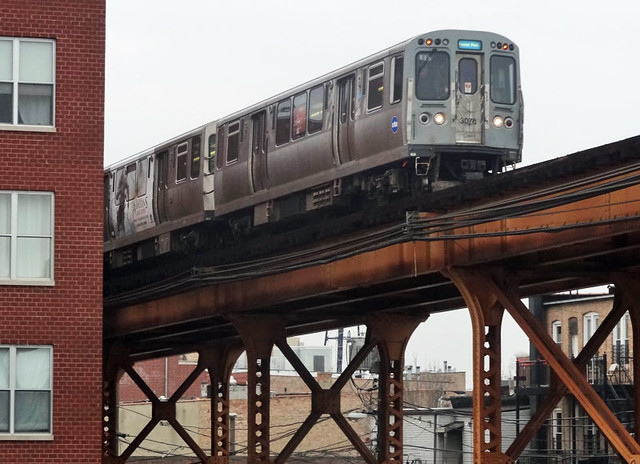 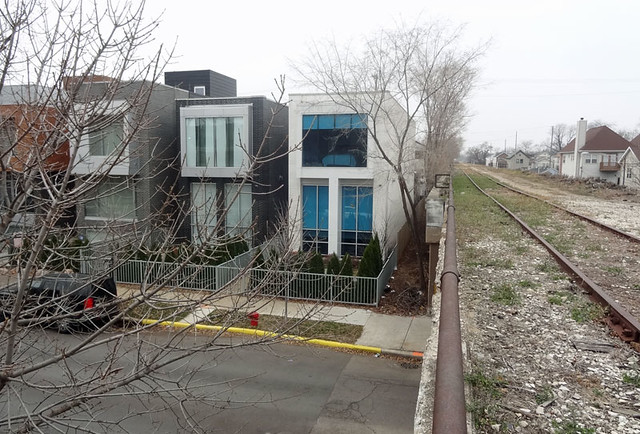 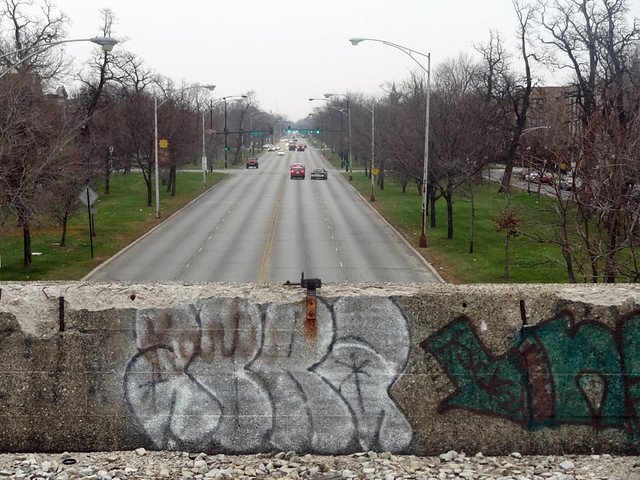 UPDATE: A few years back, this trail was finally paved and completed. It was renamed the 606, and it opened to the public. It now serves thousands of pedestrians and cyclists per day on the city’s west side, making it truly one of the cool Chicago attractions.