Back in the 1600s, anti-earthquake engineering and design techniques were not as advanced as they are today. Builders who lived in earthquake-prone places like the Philippines had to figure something out, so they got creative while constructing Paoay Church. 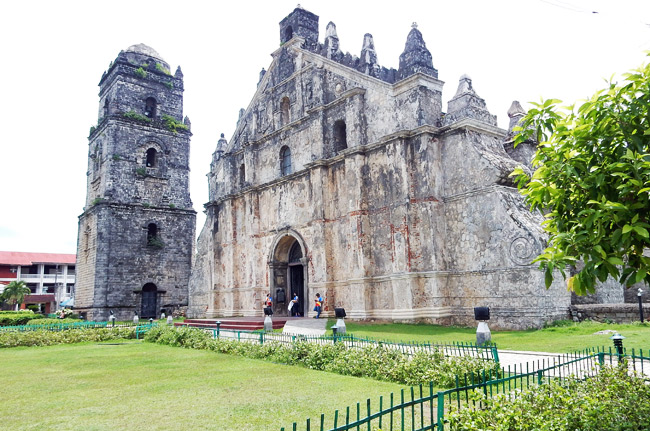 Begun in 1694, the church was built with massive buttresses on each side to strengthen and protect it against the inevitable rumbling of tectonic plates that had destroyed many Philippine churches in the past. 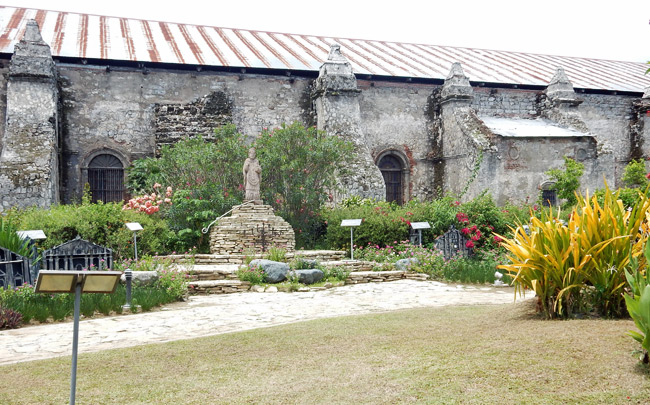 While earthquakes did cause some damage to Paoay Church many decades after it was completed, the structure held up fairly well, and the Roman Catholic church is still in use today as one of the few remaining Baroque churches in the island nation.

Paoay Church is one of several historic churches in the Ilocos region. It’s also a UNESCO World Heritage Site, along with three other churches in other parts of the country.

If you visit the northern region of the Philippines, take the time to visit the Ilocos tourist spots of the Paoay Church and the nearby Paoay Convent Ruins.

Paoay Church, also known as San Agustin Church of Paoay, is one of the most impressive structures in the Ilocos Norte province. The buttresses give the church its unique appearance, along with the imposing belltower, constructed many years after the church itself was completed.

When I visited, lots of tourists were milling around outside, posing for selfies, taking pics with the giant “PAOAY” city welcome sign, observing the belltower up close. Many walked inside, where visitors are welcome, provided they adhere to the list of rules. 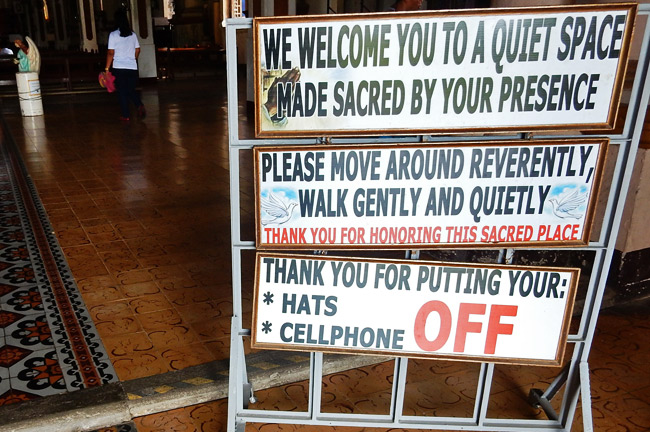 Let’s check out the Paoay Church interior. Inside, the church is spacious and retains its old-fashioned feeling with its old wooden pews and tiled floors. 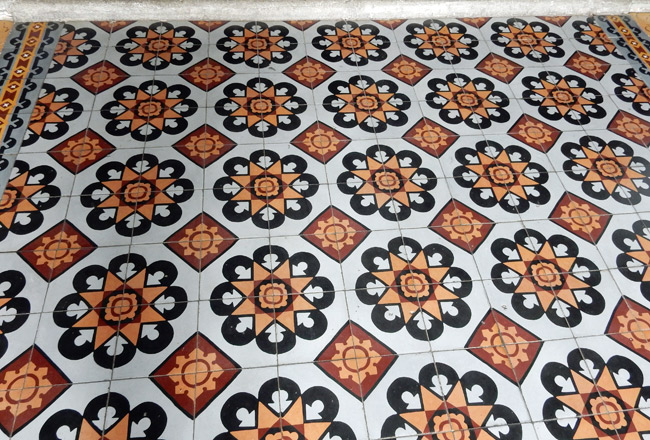 Guests are invited to say a prayer and light a candle. 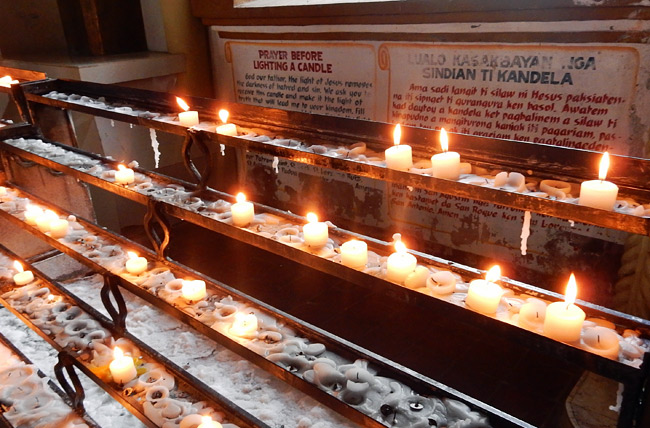 As noted in the historical marker, the church was damaged in 1706 and 1927. Despite its heavy-duty construction, sometimes earthquakes are just too powerful. But the building continues to stand, and the church holds services to this day.

People often hold weddings here. They can set up dinner in the front lawn and experience the orange glow on the building during sunset. 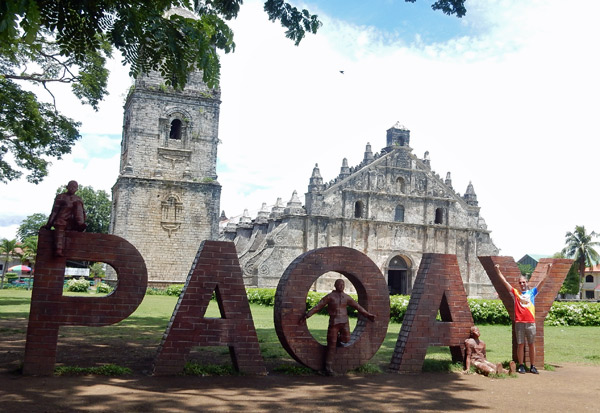 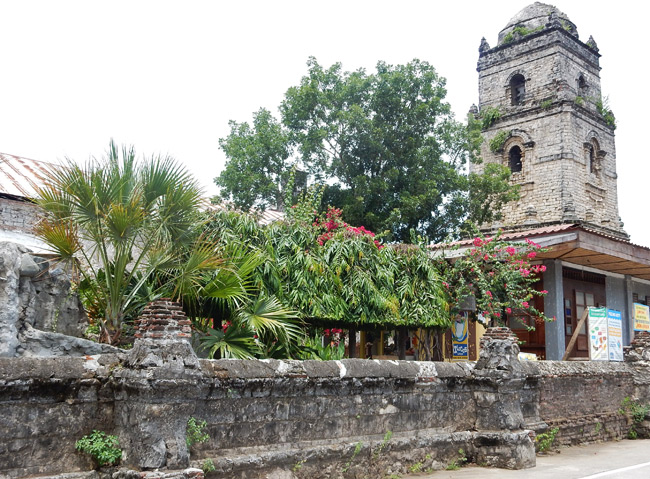 Paoay Church history is pretty fascinating. Despite its sturdy design, earthquakes in this area can be powerful, and they caused damage to the church in 1865 and 1885. Restorations were later made to fix up the church in both cases. It was declared a National Cultural Treasure by the Philippine government in 1973.

Not far from Paoay Church are the ruins of an old convent built around the same time. The roof is completely gone, but many of the walls remain. In 2015, the Philippines refurbished the site and turned the ruins into an official tourist spot, celebrated by a dedication ceremony featuring Governor Imee Marcos. 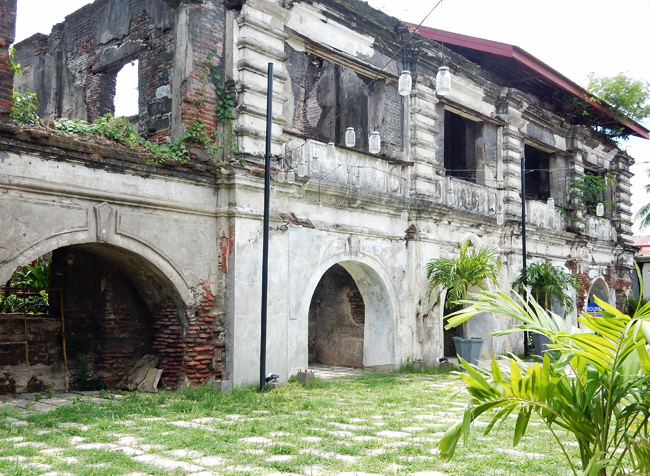 In both the church and the convent, local materials were used for the building. Materials in the plastering of these buildings included bricks, coral stones, egg whites, molasses, and lime. You can still see spots where the bricks were augmented with various other materials. 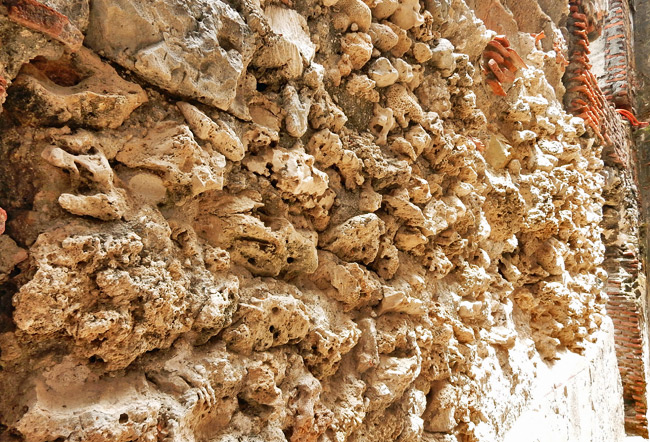 In one of the main rooms, upside-down umbrellas now hang from above as art pieces. Spoiler: These umbrellas are a new addition. They are not from the 1700s! 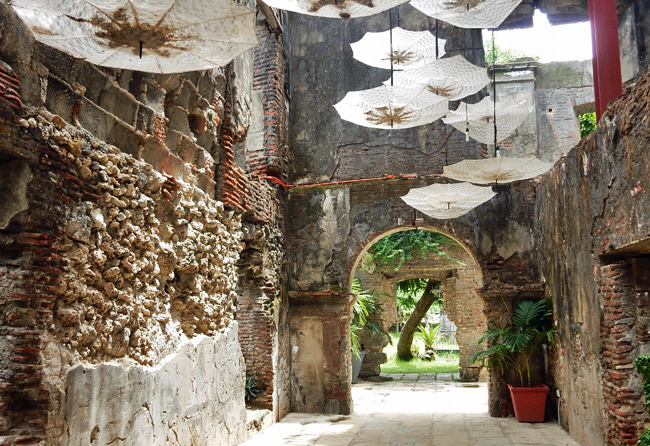 Trees and foliage have taken over some of the old rooms. It was fun to walk through the various open spaces and imagine how things might have looked here 300 years ago. 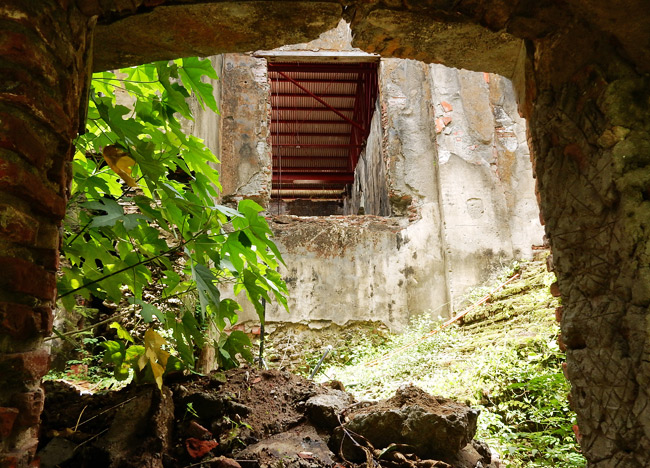 Note: I was a guest of TBEX and the Philippine Department of Tourism during my visit to Ilocos Norte. 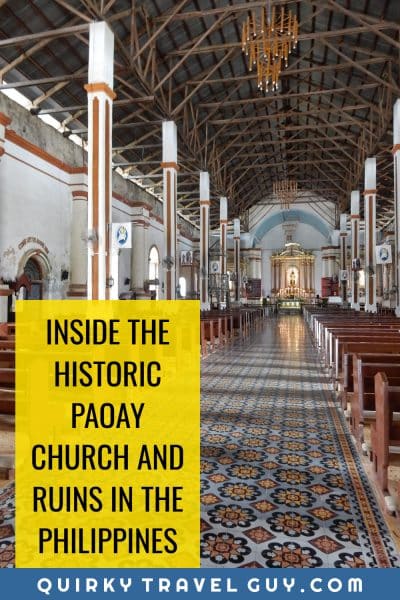