Before visiting Dry Tortugas National Park, I had read a blurb about an American crocodile that lived there. Nicknamed Cleatus by park rangers, the lone croc arrived on Garden Key 14 years ago and never left. 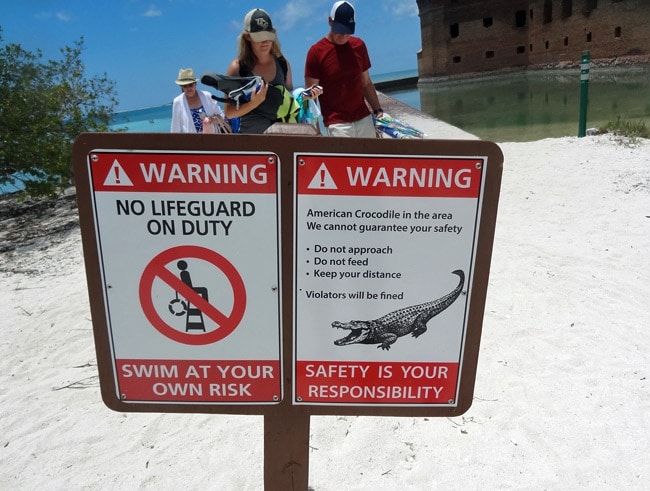 Signs were everywhere on the island warning visitors about the croc, but I assumed there was little chance I’d actually see him. And then I saw a small group of people gathering around the moat of Fort Jefferson.

I ran over, and there he was, sitting motionless in a small recess along the moat wall. Cleatus the crocodile! 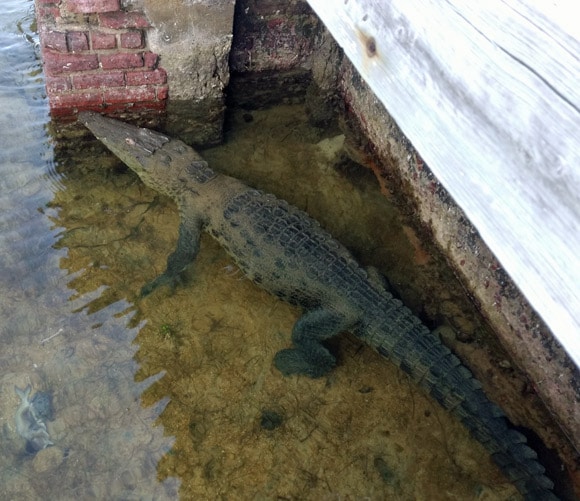 Seeing the crocodile was one of the highlights of the Dry Tortugas experience, not just for me but for many of the other visitors I spoke with. He was so well-known that he had his own brochure in the visitor center. 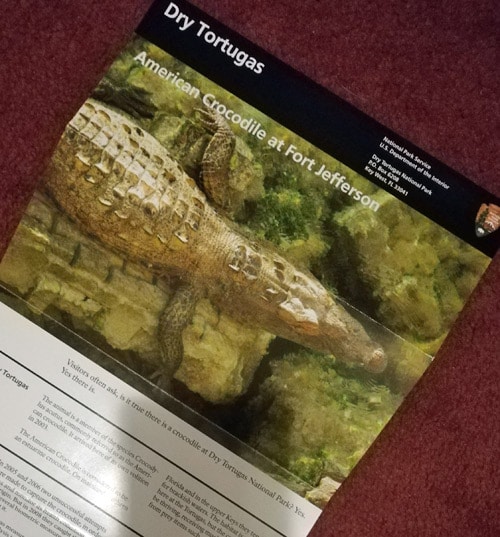 Sadly, it turns out I was one of the last visitors to see Cleatus. Less than a week after my visit, the croc was captured and relocated to the Everglades by park officials who were worried he was getting too close to tourists. The decision sparked some outrage from wildlife biologists.

How did the crocodile get to Dry Tortugas in the first place?

Cleatus swam to Dry Tortugas in 2003, presumably from the Everglades. Crocs have been known to swim many miles, but a swim of 70 miles from the mainland seemed unusually far.

Still, he made himself at home. The waters of Dry Tortugas are teeming with crabs and fish of all sizes so he had no problem feeding himself. In all these years, no other crocs have ever been seen in the park.

After two previous attempts to capture Cleatus were unsuccessful, officials finally succeeded in 2008 and were able to make measurements and take DNA samples. They determined that his mother was from the Everglades and his father possibly from Jamaica.

The crocodile’s behavior on the island

Over the years, Cleatus moved between different islands in Dry Tortugas but was often seen at Garden Key, the main island where a few hundred tourists arrive daily. 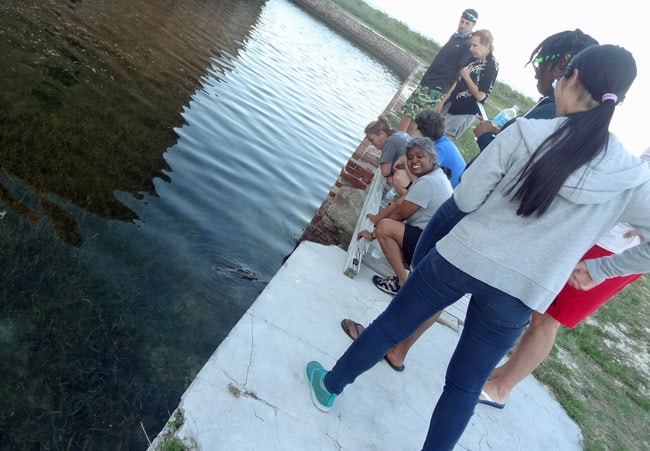 We saw him in the moat, less than 100 feet from where many folks were camping. I silently observed him for quite some time and never saw him move, even when a medium-sized fish swam in front of him. I was bracing to see a snap of those powerful jaws, but it never happened.

In retrospect, maybe it was dangerous to be camping just 100 feet from an American crocodile, but at the time it seemed like no big deal since he had never approached people. He was still in the moat the next day, in the same spot as the night before.

I recall hearing someone, probably a ranger, say they were considering moving him out of Dry Tortugas, but that seemed far-fetched since he had been there so long. 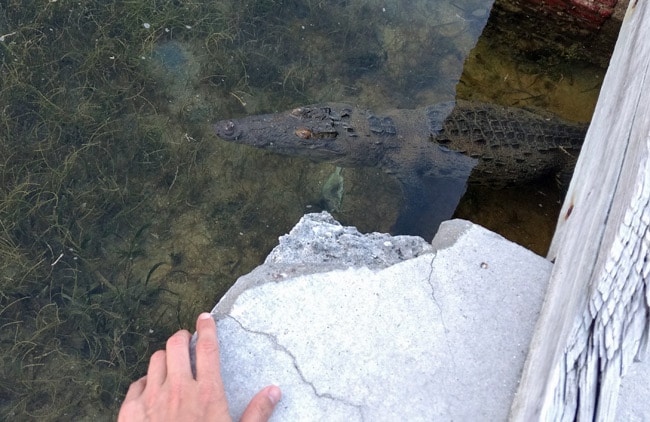 Removal of Cleatus the crocodile

A few short days after my visit, the NPS announced it had captured Cleatus, given him a private seaplane ride to the Everglades, and released him there. Their reasoning seemed sound; the croc had apparently become more interested in humans after some began feeding him. They decided not to risk an attack and take the pre-emptive measure of moving him out.

Some wildlife biologists, though, were outraged at the move, claiming it was an overreaction and that moving a wild animal from its home of 14 years would like do more damage than if they had left him alone.

I’m not sure which side is correct, but I am very happy that I got to see Cleatus before his forced migration. American crocodiles are rare (less than 3000 of the threatened species exists), so seeing one in its natural habitat was a thrill.

Check out our related articles about snorkeling at Dry Tortugas, and experiencing historic Fort Jefferson. To reach Dry Tortugas, you have to take the ferry from Key West. Here’s our driving guide to a road trip from Orlando or Miami to Key West!