I hadn’t necessarily planned to take a Cuba classic car tour around the streets of Havana. It seemed too cliché and touristy. Thank goodness a friend talked some sense into me before the trip.

When I told him I was heading to Cuba, his immediate response was, “You have to ride in one of those old cars!” And I thought, “Well yeah, of course I do!”

The vintage car ride was the first thing we did upon arriving in Havana, and that was a great call, because it allowed us to cool off (walking through the humid streets was brutal) and get to know the lay of the city. 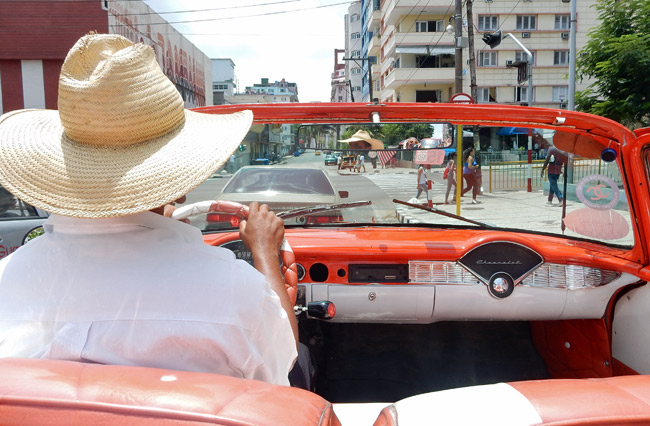 Cruising through the streets of Havana with a friend in the backseat of a 1956 Chevy convertible with the breeze blowing through my hair qualifies as one of those amazing travel moments that I never thought I’d have.

Cuba classic car tours are easy to find and I highly recommend that tourists splurge for a vintage car ride. Here’s how you can find a ride in Havana, and how much you can expect to pay.

My friend Lorie and I stayed at a casa particular (the local version of AirBnb) in the Centro district. Our host told us that we could find a classic car taxi near the Hotel Nacional in the modernized neighborhood of Vedado, so we snagged a cheap local cab and headed down there.

When we arrived at the hotel, we saw only two classic cars sitting in the parking lot, far fewer than we expected. But that was good enough. One of them was a shiny orange 1956 Chevy convertible. So we hopped in and requested an hour ride around town. At that moment, we felt like the coolest Americans in Havana. 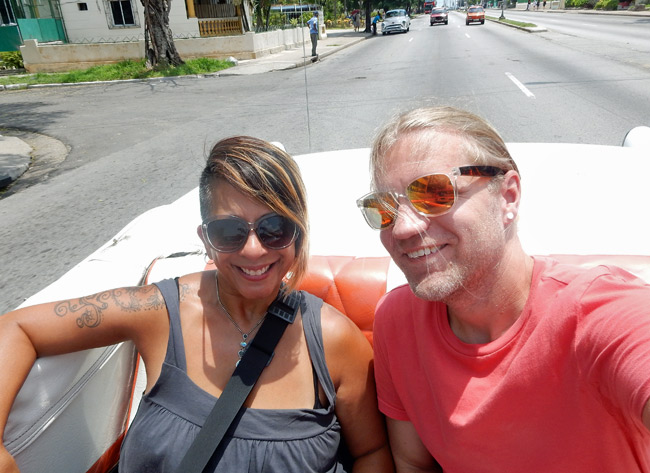 I told the driver a couple of spots that we wanted to visit, but of course the cabbie has done this trip many times, so he was already going to take us to those places.

First, we cruised down the Malecon, the boardwalk and seawall that runs for three miles, to the Miramar neighborhood. We passed a number of hotels, parks, and other large buildings that sit near the water. 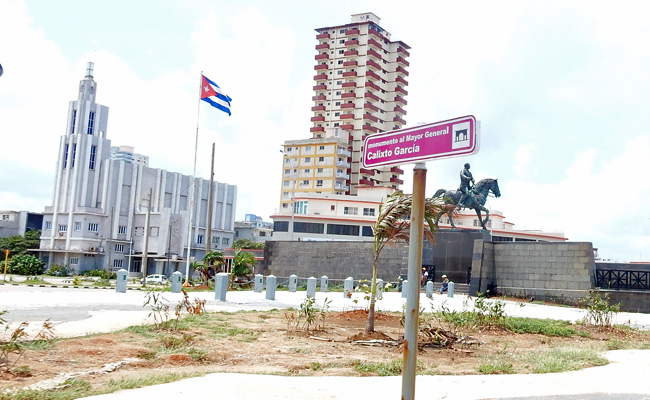 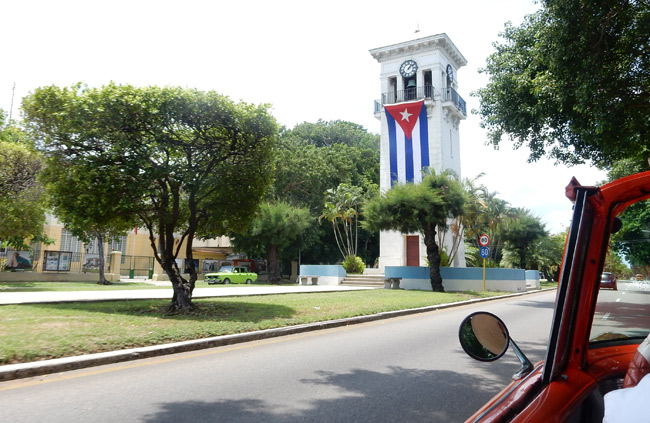 Our first stops were Parque Emiliano Zapata, named after a Mexican revolutionary who advocated for rights for the poor and working class, and Parque de los Ahorcados, which had massive jaguey trees with their roots dangling down from the branches.

If I understood the driver’s Spanish correctly (like most Cuban taxi drivers, he did not speak English), he said these trees were a gift from the president of India 150 years ago. I believe it – the trees looked realllly old. While we were parked, we had time to take a few pics behind the wheel of the Chevy. Score!

A local artist came over and started drawing a caricature of me while we waited in the park. I told him no thanks, but he continued working on the sketch in expectation of a tip.

He showed us the final drawing just before we drove off, and it was terrible, but kudos to him for trying. This was the first of many instances in which we saw enterprising Cubans hustling to make a buck.

We continued past through Parque Almandares, the city’s urban forest area, and into Nuevo Vedado, which according to our driver is where members of the military live.

Much of Havana looks like a time warp from the ’50s – not just because of all the old cars, but because life remains more simple here. Nobody has internet at home, and a lot of people don’t have tv or other American comforts, so they spent their time walking around, visiting with neighbors, hanging out on the Malecon.

Next, it was off to Plaza de la Revolucion. This is the iconic spot that American hipsters in Cuba will want to visit. Gotta get that photo with the Che Guevara mural! 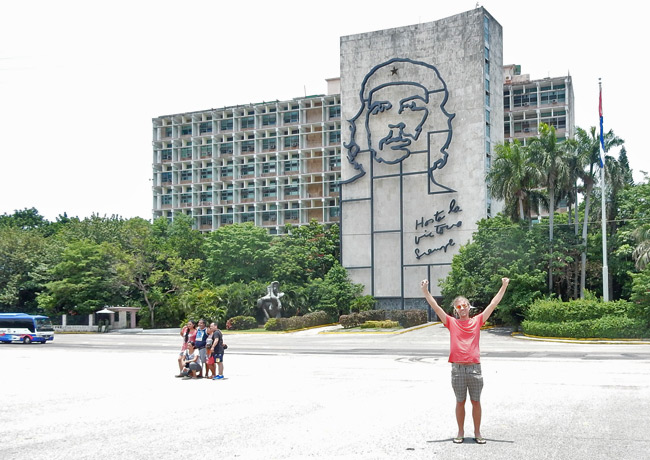 Che’s face adorns the side of the Ministry of the Interior building. There’s another mural here that I assumed was Fidel Castro. Only after returning home did I learn from Wikipedia that it’s Camilo Cienfuegos, another Cuban revolutionary figure. 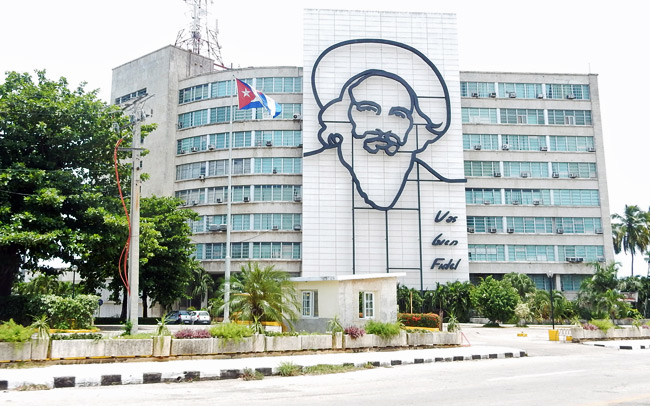 It’s easy to see why people would think this is a Castro mural, given the long beard and the quote “Vas bien Fidel” (“You’re doing fine, Fidel.”)

The tallest structure in Plaza de la Revolucion is a 358-tower dedicated to 19th-Century national hero Jose Marti. A statue of the man himself sits in front of the memorial tower. 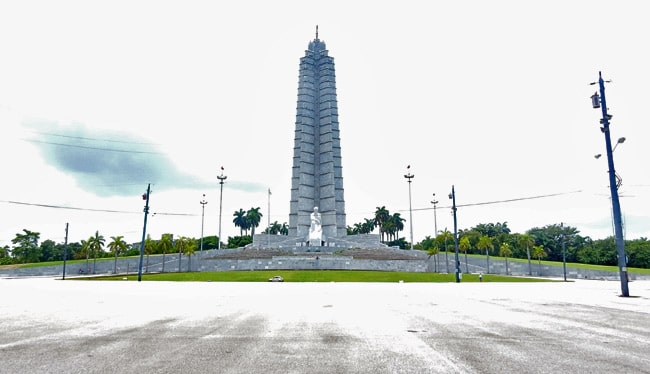 After leaving the plaza, we headed toward Old Havana and the Capitol building, but it took a while to get there because the streets in this area were congested with taxis. We passed by a small Chinese cemetery. Havana actually has a Chinatown. I had no idea – that was just one of the many surprises this city revealed. 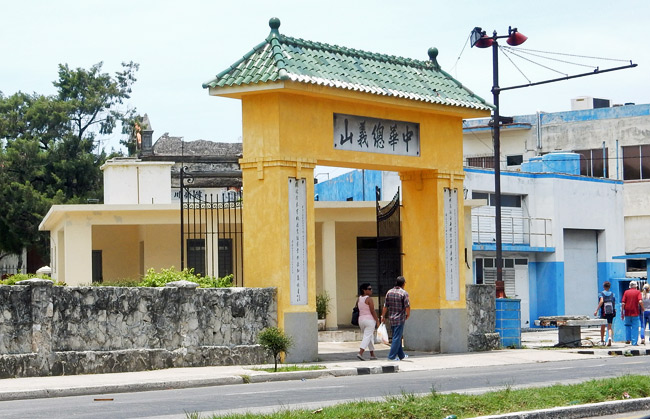 Finally, there it was, el Capitolio. This structure is slightly taller and has a bigger dome than the US. Capitol. 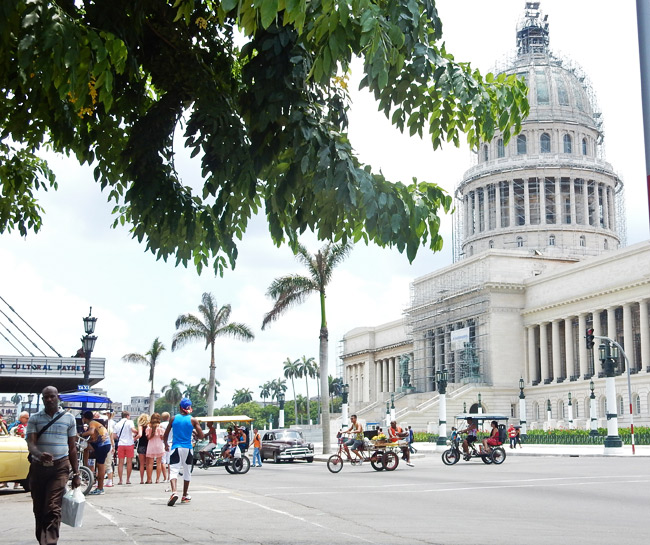 This area of town, Havana Vieja, is full of historic buildings and tourist attractions. It’s one of Havana’s most high-traffic areas, with lots of tourists and locals wandering around the streets. 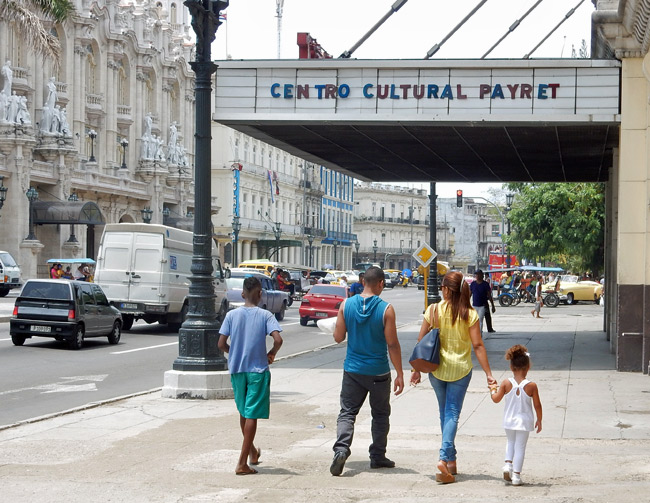 There’s a huge line of classic cars near the Capitol waiting for passengers. Choose your color! 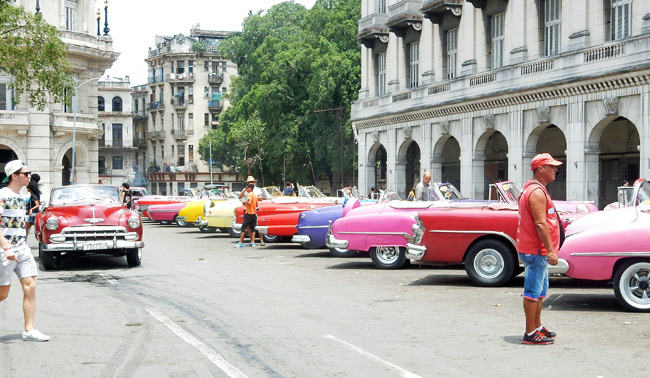 Who wouldn’t want to sign up for Cuba classic car tours in one of these colorful rides? I kinda wish I had gone with one of the pink or yellow cars since they look so cool.

Tips for riding in a classic car in Havana

From my own experience and from what I’ve read, $30 CUC (equal to $30 US) seems to be the going rate for an hour-long ride. Split between multiple people, that’s not outrageously expensive.

Keep in mind this is for one of the really nice, vintage American cars. There are other basic classic car taxis around town that you can ride in for just a few bucks, but they won’t be clean or nice or well-kept.

Always negotiate the terms of any Cuban taxi ride up front. Have them agree to the price and to the length of the ride. Our cabbie asked for $35 and accepted our offer of $30.

However, if you attempt to secure a classic car ride at the Capitol building, you may be asked to pay as much as $50. This is the peak tourist location, so they are trying to maximize their profits. If you have the time and the fortitude, haggle to get a better deal. 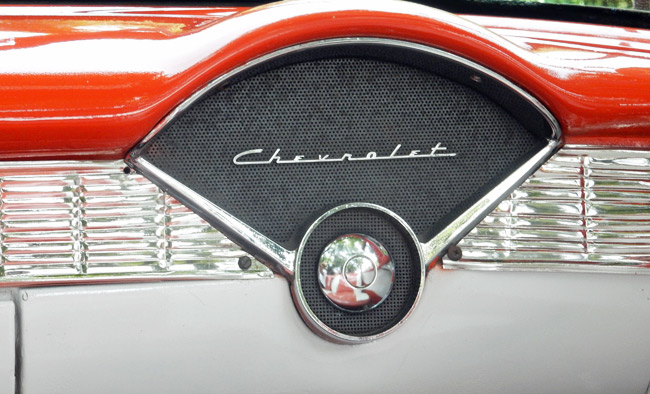 Important: As with all purchases in Cuba, be sure to have exact change! If you’ve just come from the airport currency exchange, you may only have $50 and $100 bills in your wallet. Do not expect Cuban taxi drivers to have change, ever. You’ll be stuck giving up one of your large bills if you do not have correct change.

As noted, the drivers who do these one-hour tours have a particular set of attractions they’ll take you to, but you can always make your own requests. In our case, I asked for the ride to finish in Old Havana, so he changed the route accordingly.

I highly recommend that tourists start with the hour-long taxi ride as their first activity in Havana. It’s a great way to get acquainted with where the various neighborhoods are. And, if you can speak a little bit of Spanish, you’ll learn some cool stories about the city’s history.

NOTE: If you’re not feeling keen on haggling with local drivers, you can save yourself the effort and book an organized tour that will give you two full hours in the vehicle, plus a free cocktail. The tour is quite a bit more expensive than booking a car on your own, but it’s less stressful if you like booking in advance.

Do you have any tips on how to secure Cuba classic car tours? Leave a comment with your advice!

Heading to Havana? Make sure to check out our full series of Cuba blog posts. Here’s a big post with answers to frequently asked questions about Cuba travel. This post has more than 50 pictures from Cuba that depict everyday life in the country.

If you’re concerned about crime and safety, read our guide that answers the question, Is Cuba dangerous? Many travelers are confused about whether it’s necessary to pay a departure tax at Havana Airport. And here’s our explanation of LGBT life in Cuba.

4 thoughts on “Cuba Classic Car Tours: How to Cruise Through the Streets of Havana in a 1956 Chevy Convertible”