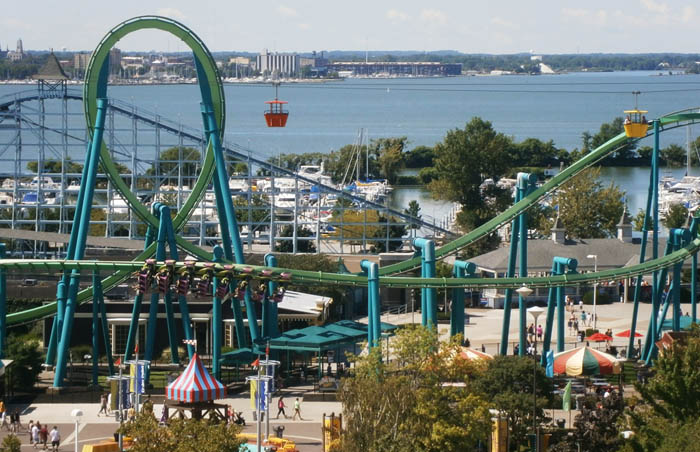 Located on Lake Erie in Sandusky, Ohio, Cedar Point has always been my favorite amusement park because of its overwhelming number of unique roller coasters. We stopped by Cedar Point in August for a two-day visit to experience the thrills.

The marquee thrill ride is the Top Thrill Dragster. When it opened in 2003, it was the tallest (420 feet) and fastest (120 mph) coaster in the world.

The amazingly thing about this ride is that, instead of slowly building up to a high speed, it starts riders from a dead standstill and then immediately shoots them out at 100+ miles per hour. It’s a feeling I’ve never experienced on any other ride anywhere. You are then sent up a completely vertical arch and back down the other side. The whole ride lasts just 17 seconds, and you may wait in line for an hour to get on. Believe me, it is worth every second!

I didn’t get any good pics of the Top Thrill Dragster, but if you’ve never seen it before, watch the video at the bottom of this post. It will blow your mind.

Other thrill rides at Cedar Point

Another amazing ride is the Maverick, which has a drop of 95 degrees. That’s right, it’s more than vertical – the track actually bends back in slightly. When you ride it, you don’t really notice that the drop is so steep, unless you’re in the front seat, and then you realize just how crazy it is!

The Raptor is one of my favorites because it’s one of those coasters where the track runs overhead and your feet dangle below. It runs for more than two minutes and includes several loops and corkscrews.

Millennium Force is routinely voted the best coaster in the world. Its 310-foot opening hill is crazy because it’s insanely steep. I’ve never been on a hill that was so steep. You’re pretty much looking straight up as you go up. It’s very disconcerting but fun at the same time. And the ride is incredibly smooth.

Since my visit, some new thrill rides have opened in the park, including the reverse bungee ride Slingshot (2014), a disk ride called Pipe Scream (2014), the steel dive coaster Valravn (2016), the steel hybrid coaster Steel Vengeance (2018).

The new ride back then was the Windseeker, which is kinda like a traditional swing ride, except it takes riders up 301 feet before starting the swing process. This ride was a letdown; besides being very short and kind of boring and taking too long to load, the ride made me worry about throwing up.

I’ve never actually gotten sick on a ride, but way up there, I suddenly started to fear throwing up on the dozens of people waiting in line 300 feet below. It was also really cold up there! A little bit of altitude makes a big difference.

And then there was the Mean Streak, which lived up to its name. This wooden coaster was so horribly uncomfortable it gave me a massive headache and physically hurt me and my fellow riders by repeatedly thrashing us back against the seats.

Here’s how the ride looked at the end; notice how virtually nobody was on it. That should’ve been my clue not to get on.

I seriously wanted to sue somebody after I got off this ride. It was absolutely brutal. Someone should light a match and burn this thing to the ground. (Metaphorically speaking, of course.)

Update: Mean Streak, thank goodness, was finally removed from the park in 2016. Parts of its framework were used to build Steel Vengeance, the coaster that replaced it.

We visited the park during the last week in August, unofficially known as “dead week” because the number of visitors is down. That makes sense, since most kids are getting back to school and families aren’t traveling around that time.

We encountered very short lines, allowing us to claim the front seat on almost all the big coasters. Visiting Cedar Point in August is definitely the way to go if your schedule allows!! 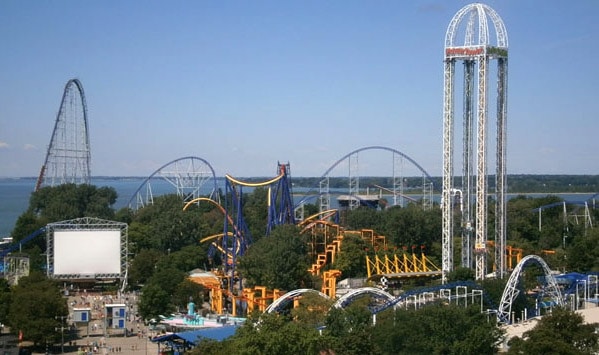 You can avoid having to rent lockers by only taking the necessities into the park and by wearing fanny packs, as we did. Yes, it looked ridiculous, but I’m pretty sure the paparazzi didn’t catch me.

We also checked out Soak City, Cedar Point’s water park, and found it to be decent but not spectacular. The highlight was a completely enclosed tube slide called Eerie Falls that was really fun because it was totally dark.

We only played a couple of games but walked away with two big stuffed animals thanks to our dart-throwing prowess – a turtle named Hector and an elephant called Larry. 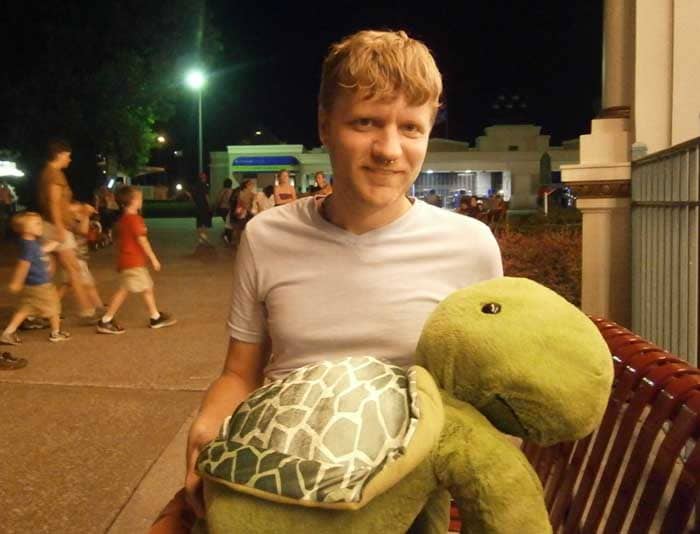 Would you visit Cedar Point in August? What’s your favorite amusement park?

If you’re making an Ohio visit, check out our guide to the coolest things to do in Columbus. Here’s our guide to Amish Country in Berlin, Ohio. Then there’s our list of quirky and cool things to do in Cleveland. And a detailed guide to visiting Cleveland’s A Christmas Story House and Museum, which is the house seen in the famous holiday movie.