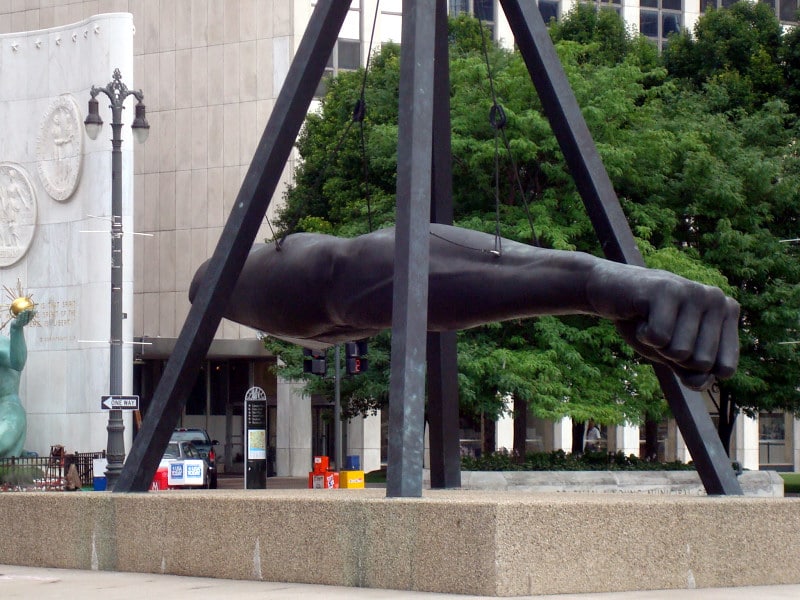 In downtown Detroit, near the river that looks across to Canada, sits a statue of a giant arm and fist. It could be a weird piece of modern art sculpture, but it’s actually a tribute to famed boxer Joe Louis, who achieved greatness with that fist.

The Joe Louis fist statue resides near another memorial called the “Spirit of Detroit,” and they’re close enough that at first I mistakenly believed that the fist was the Spirit of Detroit. That cracked me up – the idea that the true spirit of Detroit was a punch to the face.

But no, the spirit statue is something less interesting. It’s the fist that is worth seeing. The arm is 24 feet long and weighs 8,000 pounds. That’s quite a body part!

History and Story Behind the Joe Louis Fist Statue

Sculptor Robert Graham completed the fist statue in 1986, on the 100th anniversary of the Detroit Institute of Art. You may one of Graham’s other works – the statue of President Roosevelt at the Roosevelt Memorial, one of the many monuments of Washington DC.

The giant Joe Louis fist is made of bronze and painted steel. It faces toward Canada, so you can take creative photos to get the fist and Canada in the same shot.

What does the Joe Louis fist mean? The statue was intended to have multiple meanings. It represents the success of Joe Louis in the ring. But it also symbolizes the fight for racial equality, as Louis had to overcome a lifetime of racism to achieve greatness. He was heavyweight champion for 12 consecutive years, from 1937 to 1949. Louis posted a career record of 66-3. He died in 1981 and was buried in Arlington National Cemetery.

Louis was one of the first American black athletes to earn popularity among whites. As a result, his social impact was far greater than what he accomplished as a fighter. The “Brown Bomber” fought during the Nazi era. President Roosevelt invited him to the White House, telling him, “Joe, we need muscles like yours to beat Germany.”

Joe Louis Jr. once said of his dad, “By winning, he became white America’s first black hero.” Black leaders like Malcolm X spoke highly of Louis, saying, “Every Negro boy old enough to walk wanted to be the next Brown Bomber.”

Reaction to the Joe Louis Fist Monument in Detroit

Not all Detroit residents appreciate the Joe Louis fist – in fact, the monument is often derided by locals for various reasons. But it does serve as a quirky attraction for visitors. Hart Plaza is a popular place to stop and grab a few photos since it overlooks Canada, so be sure to snap a few pics when you visit.

The Joe Louis Fist Monument is one of many interesting attractions in Detroit, including the Motown Museum, the Heidelberg Project, and the Henry Ford Museum.