Tombi is 36 years old. She’s one of the most prolific artists in the city of Indianapolis, banging out a new painting nearly every week. She’s only been practicing her craft for a few years, yet she’s already so popular that both locals and tourists pay good money to watch her paint. She works fast, completing new pieces in a matter of minutes. Even people who aren’t art lovers find themselves captivated by her work.

Oh, and she weighs around 8,000 pounds. Tombi is an elephant at the Indianapolis Zoo.

Animal Art Programs at the Zoo

The concept of animal art has been growing in popularity. A handful of zoos around the country offer the opportunity to purchase paintings created by animals, but the Indy Zoo is unique in that guests can actually witness the process. It’s cooler when you can actually meet the animal responsible for the creation of the artwork.

Currently, the animal art program at the Indianapolis Zoo offers paintings by elephants, penguins, dolphins, and pinnipeds (seal, walrus, sea lion.) The critters are trained to use real paint brushes in various ways. Dolphins, for instance, wear a round apparatus over their mouths that is attached to a brush, which they can swipe back and forth across a canvas by moving their heads.

The elephants have no need for a special device – they simply grip the brush with their trunks and start painting. 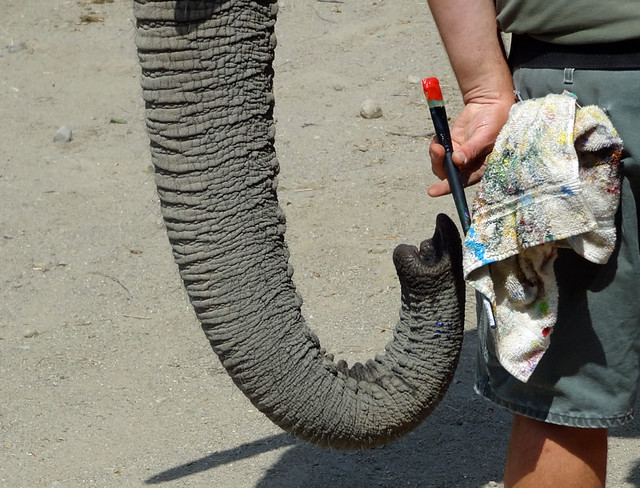 Tombi is an African elephant, one of eight at the Indy Zoo. Not all of the Indianapolis Zoo elephants participate in the animal art program. They have to be trained, and Tombi seems to have a particular talent for expressing herself through art.

The groups at each painting session are small, and most of the animal art encounters sell out in advance, so you’ll want to plan your visit way ahead of time to guarantee yourself a spot.

Seeing Tombi do her best Picasso impersonation was fascinating. Our small group of visitors was taken to the elephant barn, where the guests could choose they colors they wanted on the finished product. 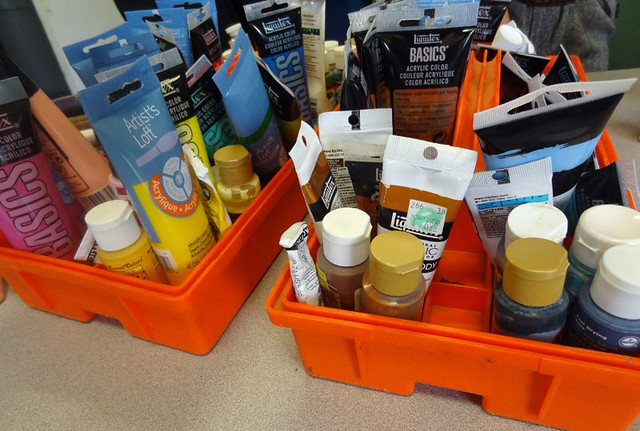 This was the color palette selected for this particular piece of art: blue, red and green. 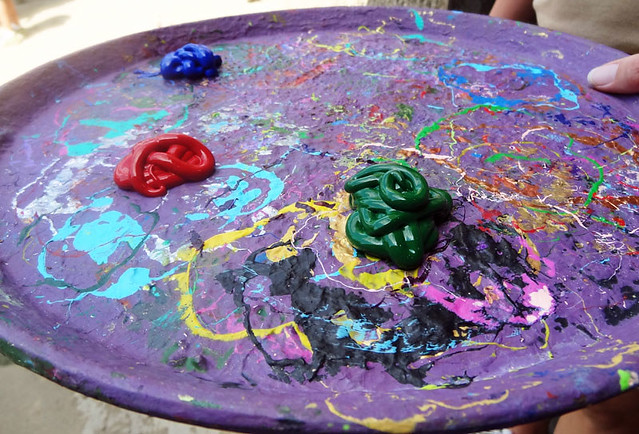 We were taken into a private enclosure, where Tombi’s trainers showed off some of the 50-60 behaviors she knows, including the ability to balance on three legs and to play a harmonica with her trunk! 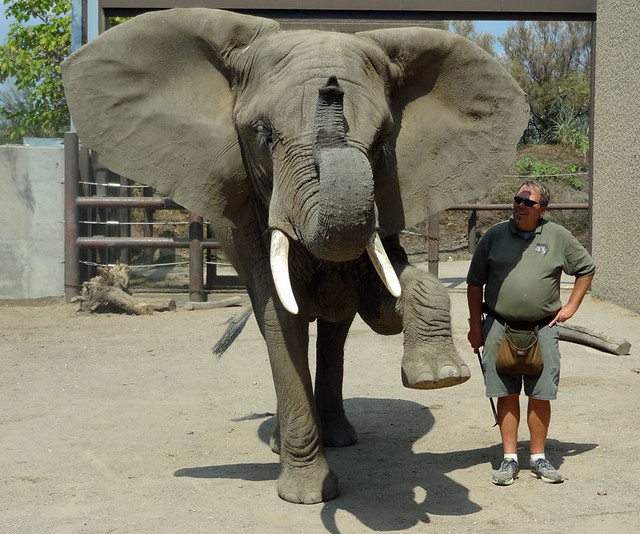 Then came the painting. Handlers dipped the brushes in paint, then passed them off to Tombi, who created a few brush strokes with each. We learned that she does have a favorite color, but I won’t reveal it, so that guests can choose their own colors without any outside influence.

Check out Tombi’s completed masterpiece! Imagine what a great conversation-starter this would be hanging on your living room wall. 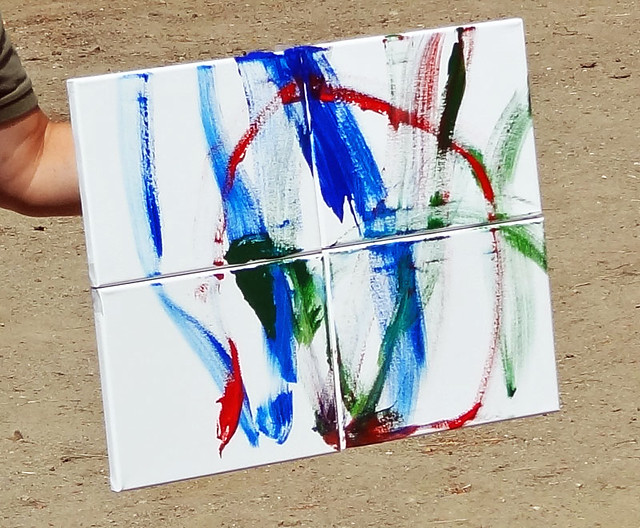 I believe Tombi intended this piece to represent the moral and metaphysical concepts of pre-Renaissance iconography, while also weaving in a modern critique of contemporary society.

Clearly influenced by Monet and possibly Renoir, Tombi chose to emphasize the profound elements of linear grace and denial of spatial construction with her bold, vertical strokes. Meanwhile, the single circular stroke in red symbolized the notion that all creatures on earth are inevitably linked and tied together in one common purpose, thus embodying the quintessential post-Classical vision of peace and prosperity for all.

Or maybe I’m overthinking this… 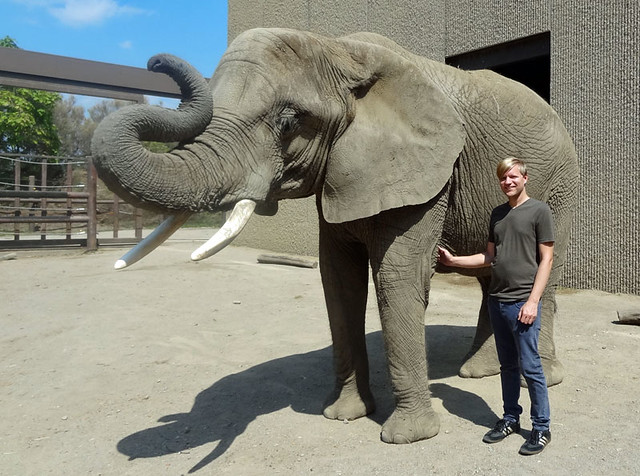 The entire process took about 20 minutes, and that included time to meet the elephant, touch her and pose for photos. If you’ve never been up close to one of these creatures, here’s your chance.

By the way, if you’re wondering whether the Indianapolis Zoo elephants give rides, the answer is no. While riding elephants was once a popular activity, people have been made aware that training elephants to give rides is cruel, and no major American zoos offer rides anymore.

Note: There is an argument to be made that having elephants paint is also cruel. Most of this commentary is directed at elephant centers in Asia, where they abuse the animals. They do not abuse the animals like that at the Indy Zoo. However, if you have any moral concerns about the issue, you can always choose a different animal encounter activity.

Check out a short video clip of Tombi at work.

Note: My visit to Indianapolis and the zoo were made possible by Visit Indy. For more on the city, read about the cool art at the Alexander Hotel, driving through the streets in a street-legal Indy car, and biking on the Cultural Trail.