There’s a cool museum in Nashville with exhibits and memorabilia from the life of the Man in Black, Mr. Johnny Cash. (Oh, and a bunch of other people, too.)

The Country Music Hall of Fame is worth a visit no matter how much or how little you enjoy country music. They even have part of the set from Hee Haw! 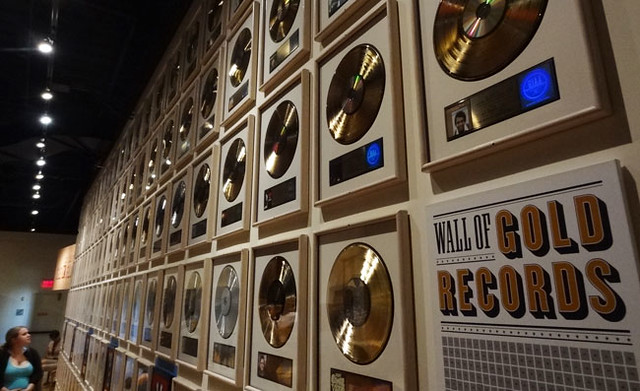 Back on my cross-country road trip years ago, I had hoped to visit the Country Music Hall of Fame, but as I was on a restrictive $5/day spending limit, the museum’s $20 admission price wasn’t in my budget.

This time around, I wasn’t going to miss out. During my visit, I was able to see both the museum and RCA Studio B, a legendary recording studio that offers a separate tour which can be purchased at the museum.

As noted, the Hall used to charge $20 admission around ten years ago. These days, it’s up to $25.95 for adult general admission and $15.95 for kids under age 12. For an extra $5, you can buy the “Museum Experience” ticket, which comes with an audio guide narrated by radio DJ Bill Cody.

The Hall also offers packages including RCA Studio B, the Hatch Poster Print Museum, and the CMA Theater. 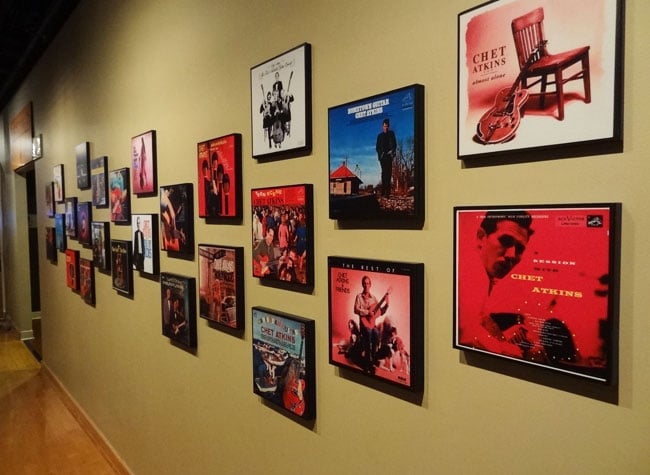 As for hours, the Country Music Hall of Fame is open from 9 am to 5 pm every day of the year, except Christmas, Christmas Eve, and Thanksgiving. Give yourself at least an hour or two to take in all the sights.

The Hall is located at 222 Fifth Avenue South. Paid parking lots are available in the general vicinity, including at Music City Center at 6th Avenue South and Demonbreun. When I visited, I found street parking, but I had to walk a bit to get to the museum.

Food and drink are not allowed inside, except for sealed bottled water. While photography is permitted, selfie sticks and tripods are not.

There is a coat check for outerwear and shopping bags; however, the museum does not check backpacks or luggage. (Bummer for out of town visitors!)

Exhibits From Johnny Cash, Elvis, and More at the Hall of Fame

The Hall of Fame welcomes non-flash photography, so I’m able to share with you a number of the sights from this hallowed institution. This place is huge – bigger than the Grammy Museum and bigger than just about every music facility I’ve been to except for the Rock & Roll Hall of Fame in Cleveland.

That thing in the middle that looks like a dinner plate is actually a 78 speed vinyl record from 1946 of a Patsy Montana song. 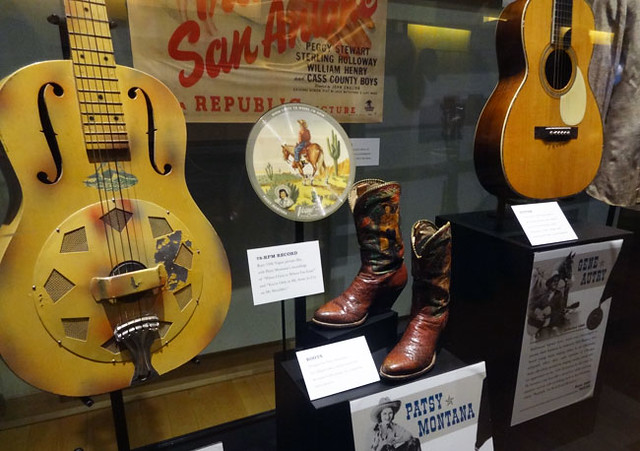 This is very cool – actual blue suede shoes! This pair of blue suede shoes was worn by Carl Perkins, who had a hit with that iconic song before Elvis recorded it. Next to the shoes is a very old short worn by rock & roll icon Jerry Lee Lewis, who was also honored at Sun Studio in Memphis. 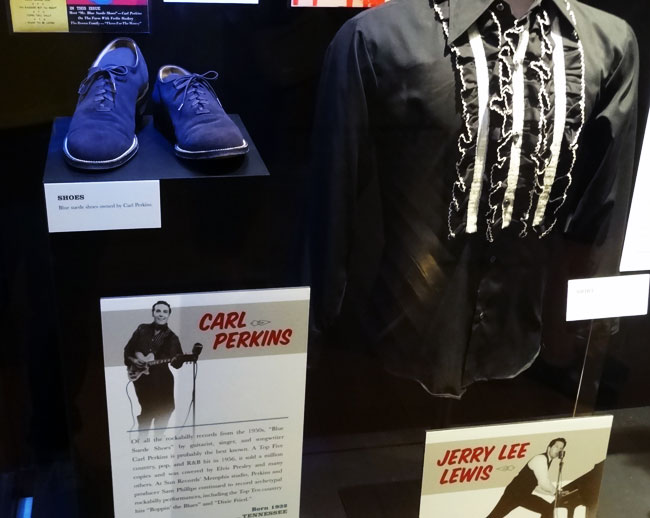 The museum houses a “gold Cadillac” and a “gold piano,” both from Elvis Presley. The Cadillac has gold plate highlights and was painted in a mixture of crushed diamonds and fish scales called “diamond dust pearl.” The interior had a record player and a tv, which were almost unheard of back then. 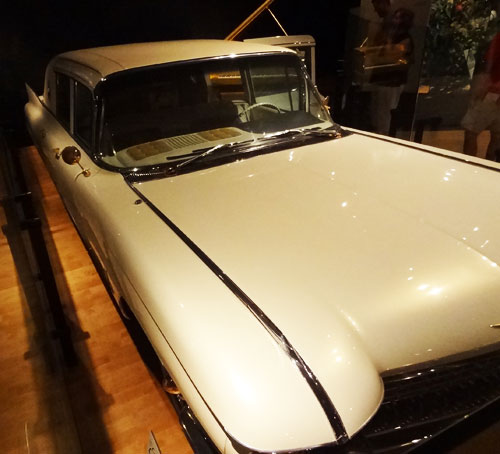 I love this display of old-timey instruments like The Whomper!, which appears to be the world’s largest banjo, and a triple-necked stringed instrument. 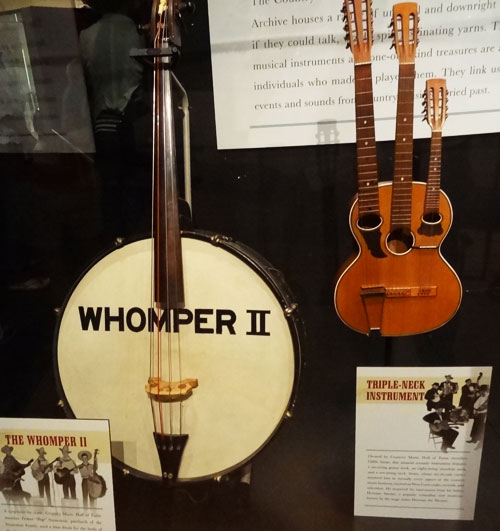 The cornfield set from Hee Haw, live and in-person. Bonus points to everyone who remembers that show. 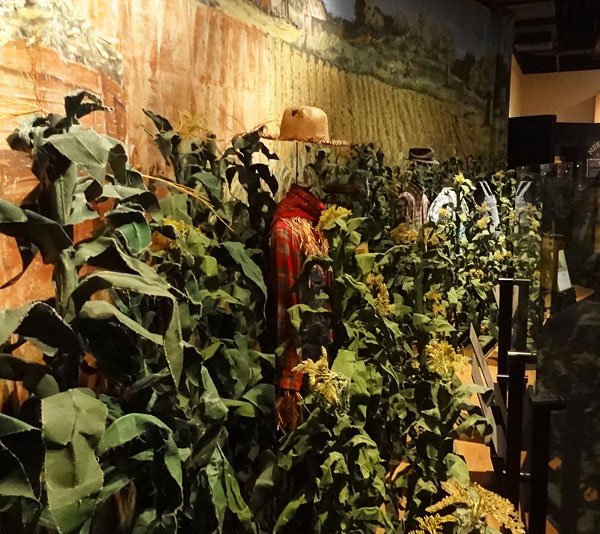 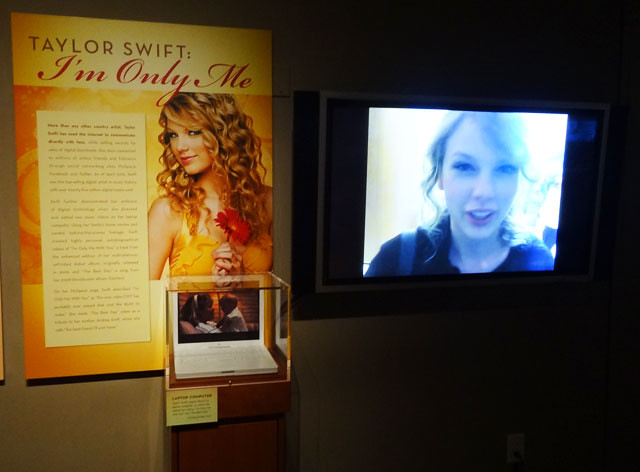 Another exhibit includes the handwritten lyrics to Miranda Lambert’s “White Liar.” Her writing is so girly! 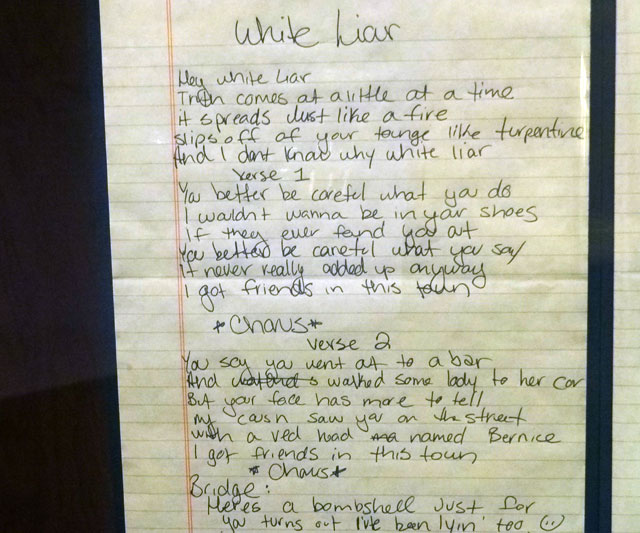 Personal, handwritten items are one of the coolest things any music museum can display. The Hall of Fame also has Merle Haggard handwritten lyrics. I wish they had even more of these original lyric sheets because they’re fascinating to see.

Here’s my favorite handwritten item in the museum – a set list to a 1994 Johnny Cash concert written by the Man in Black himself. 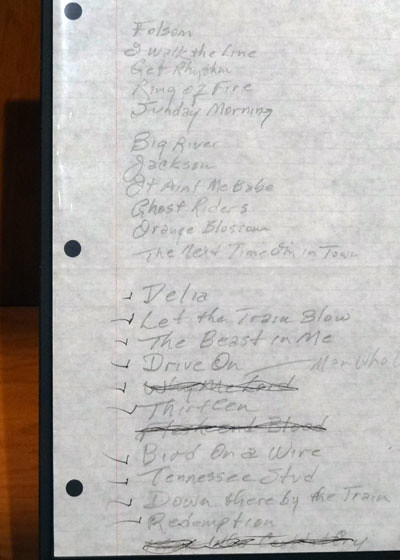 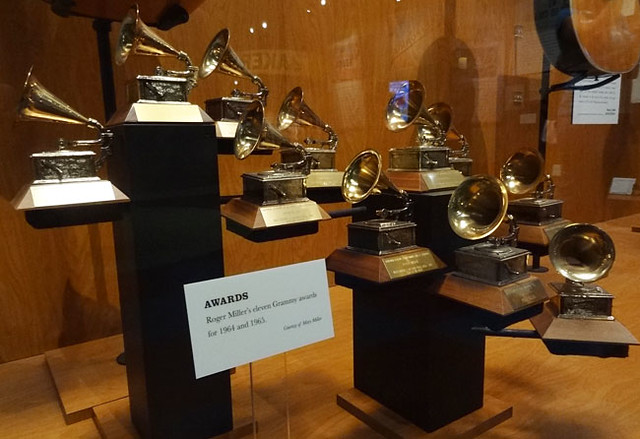 On the other side of the gold records wall is another endless collection of records. 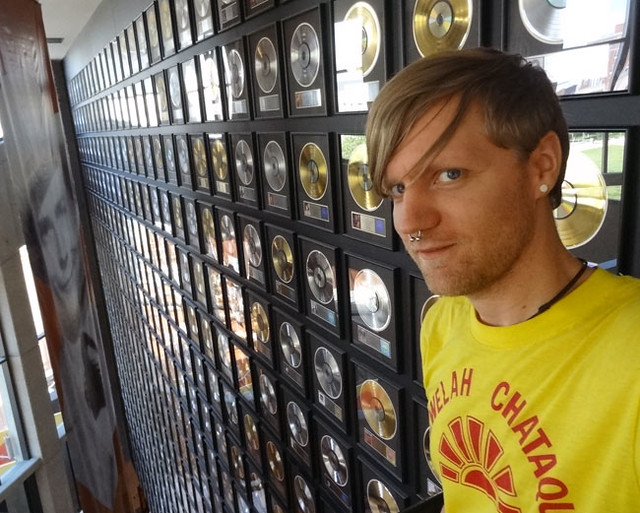 For some reason, I was really happy to see this poster of Eddie Rabbitt alongside other ‘80s and ’90s hitmakers like Lee Greenwood and Billy Ray Cyrus. Go Eddie! I love a rainy night! 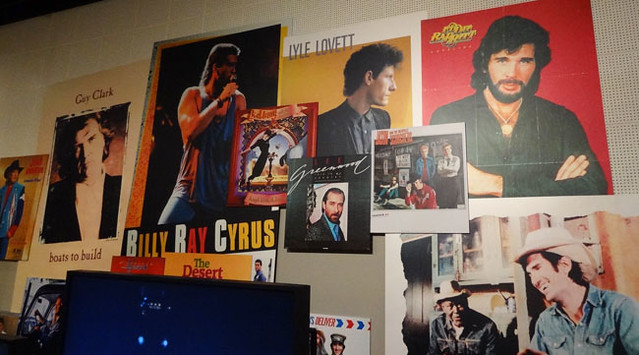 Clothing from legends Tammy Wynette and George Jones inside a display case. 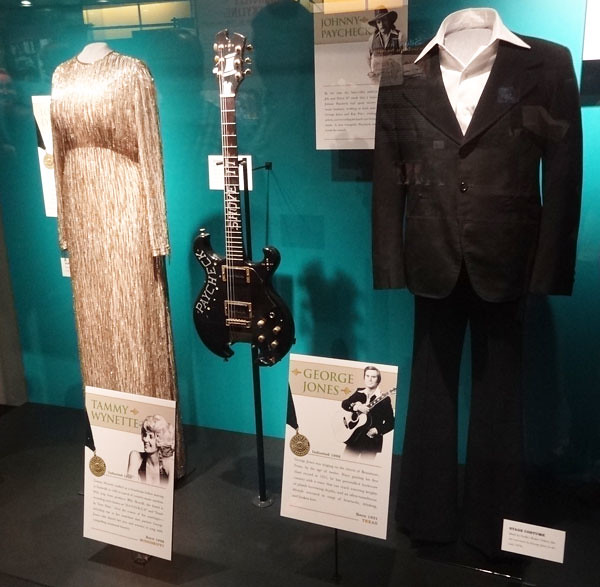 I went through the entire Hall wondering why the inductees didn’t seem to have their own busts, like most museums. It turns out the individual plaques are in the final room. 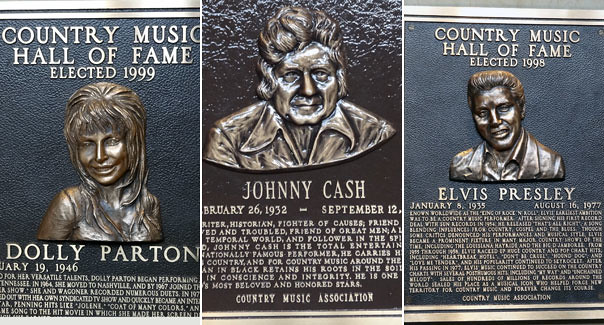 Is the Country Music Hall of Fame worth it?

Absolutely! Even if, like me, you’re only a moderately-interested fan of country music. It’s similar to the Rock and Roll Hall of Fame in that it has hundreds of artifacts and pieces of memorabilia from the genre’s biggest superstars over the past several decades.

About the only thing missing from the museum was a listening station where you could hear music by the inducted artists. The Country Music Hall should really incorporate something like that, so we can actually listen to the music of the people who are being honored.

Otherwise, I thought the Country Music Hall of Fame was an outstanding facility with great memorabilia and lots of memories. It is indeed worth the price of admission.

For related articles, check out my article on how to visit Elvis Presley’s Graceland for free, and visiting the Motown Museum in Detroit.

I was a guest of Visit Music City at the Country Music Hall of Fame. While you’re in Nashville, don’t forget to check out the Lane Motor Museum, the Nashville Parthenon, and the Dukes of Hazzard Museum.

27 thoughts on “Country Music Hall of Fame: Hours, Parking, and Everything You Need to Know”