I’ve never visited a plantation before. It feels strange to glorify places that once held slaves. It almost feels like some of the plantation tours in the south are celebrating that era, and that kinda creeps me out.

But I recently made a visit to the Andrew Jackson Hermitage mansion near Nashville, Tennessee. These grounds once housed slaves, but the Hermitage was not just a plantation. It’s actually the magnificent home built by seventh president Andrew Jackson, where he and his family lived after his presidency, and where his remains still lie.

You can tour the grounds, and what I like about the Hermitage is that it tells the complete story. Jackson is not worshipped as a deity here; in fact, the exhibits and films go out of their way to insist that Jackson was not a perfect man and did some very bad things (see that part about owning slaves.)

In fact, a quote from one of Jackson’s former slaves is a featured part of the exhibits. The slave said that Jackson was “an atrocious saint,” which highlights the conflicting sides of his legacy.

Jackson’s crimes against women, slaves, and Native Americans are discussed thoroughly here, and so are the many good things he did, like being the first president to fight for the working class over the elite.

That balanced look at Jackson’s legacy was part of the reason I enjoyed the visit to Hermitage. 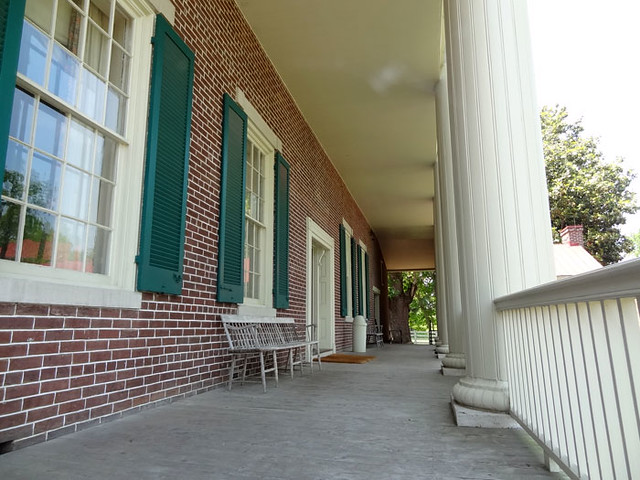 History and Sights at the Andrew Jackson Hermitage Mansion

The Hermitage was built in 1819 and remodeled in 1831 while Jackson was living in Washington, D.C. as president. Visitors are presented with a 22-minute introductory video about Jackson’s life, which sounds unnecessarily lengthy, but it was informative and interesting. As mentioned earlier, the video touches on all aspects of his life. He ran what some consider the first-ever grass-roots presidential campaign, where his supporters hit the streets and actively worked to persuade voters to elect their guy.

After the video, visitors can elect to receive a headset with audio clips for no additional cost. I don’t usually do the headset thing at museums and attractions, but here it’s a cool thing to have, because after the mansion itself, you’re on your own when it comes to walking through the rest of the site. The grounds are large and it’s nice to have the option of hearing additional facts beyond what’s printed on the basic signage.

The Hermitage does not allow photography inside the mansion itself, but that is only a small part of the tour. Visitors are welcome to bring cameras to take pictures of the exterior of the mansion, Jackson’s tomb and cemetery, and of the rest of the grounds.

As of 2020, basic admission (the “General’s Tour”) is $22. For an extra $6, you can choose the “President’s Tour,” which includes an “upgraded audio device” with additional audio, video, and maps. They also offer a wagon ride to tour the rest of the grounds. 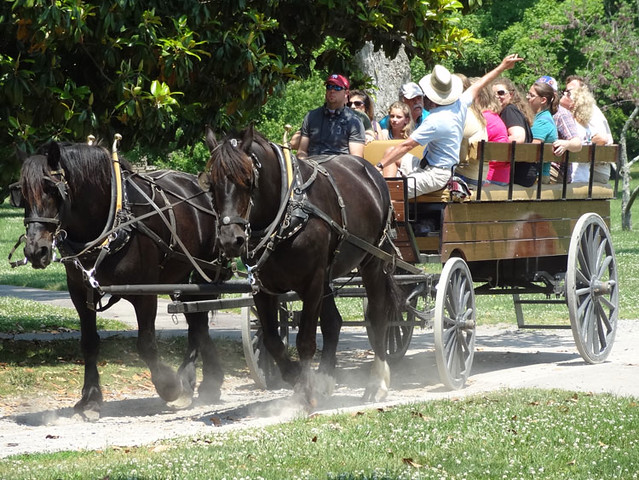 The mansion itself is interesting to see. Most of the rooms contain the original furnishings from the 1830s – wallpaper, bedding, books, elaborate furniture. Jackson’s bedroom contains massive books, the largest books I’ve ever seen, which are actually books of newspapers bound together. He kept them for reference.

Viewers are also shown the kids’ rooms and the guest rooms, as well as the living and dining room areas. I liked the dining room best – it’s impressive to see the way dinner was served in such a stately, regal atmosphere.

The one room I was able to photograph was this one across the way from the kitchen. It contains a fireplace and was apparently used as another cooking room, since the kitchen was tiny. 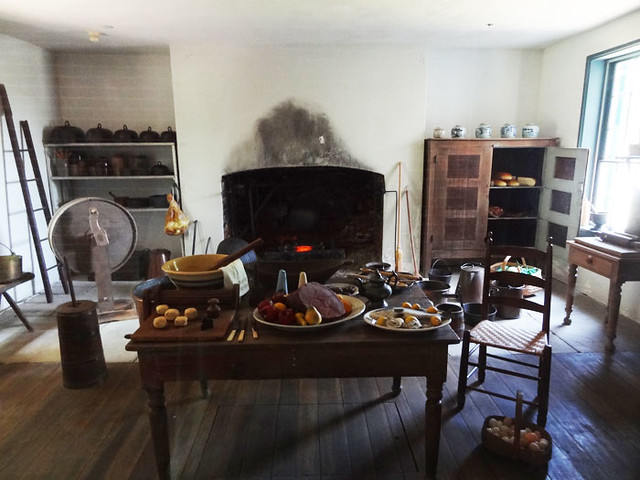 Rest of the Hermitage grounds

The cemetery includes the graves of Jackson, his wife and several of their family members. 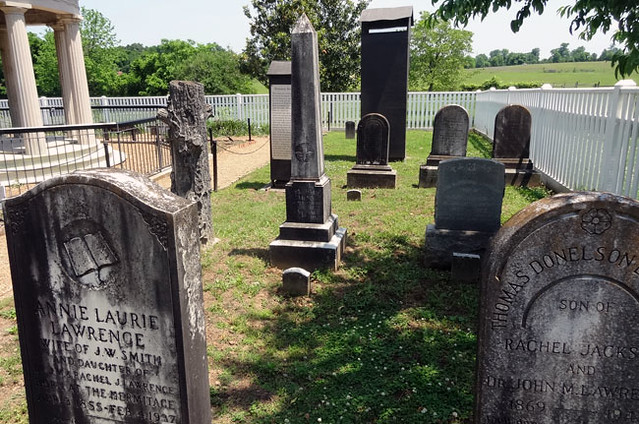 The President’s grave is the center of attention, as you might expect. (By the way, while you’re in Nashville, you can stop by the tomb of President James K. Polk as well. 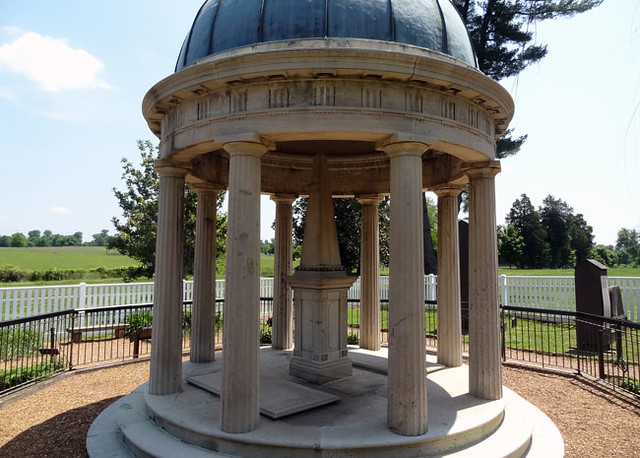 Jackson’s slave Alfred requested to be buried near his master and was granted his wish. 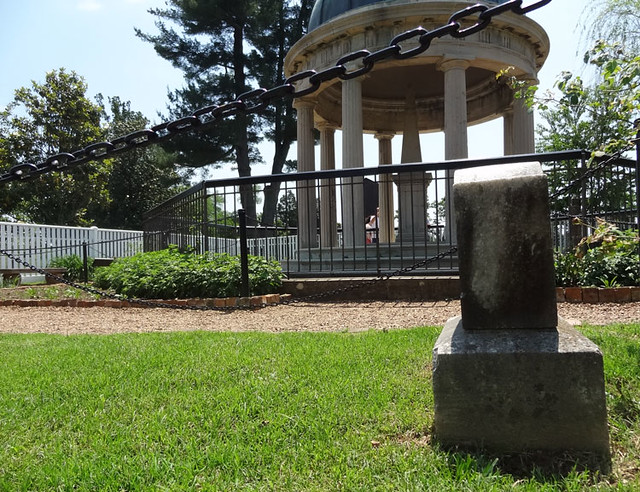 Visitors can walk into Alfred’s cabin, which sits behind the mansion. 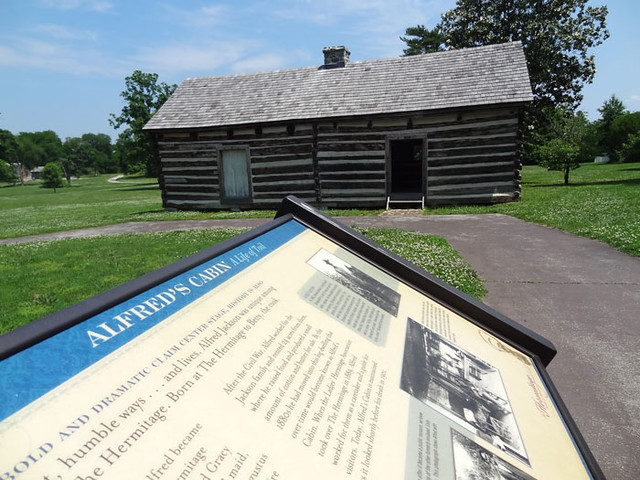 The cabin is small – just the size of a large living room. As many as 10 people (slaves and their families) used to live in cabins like this. 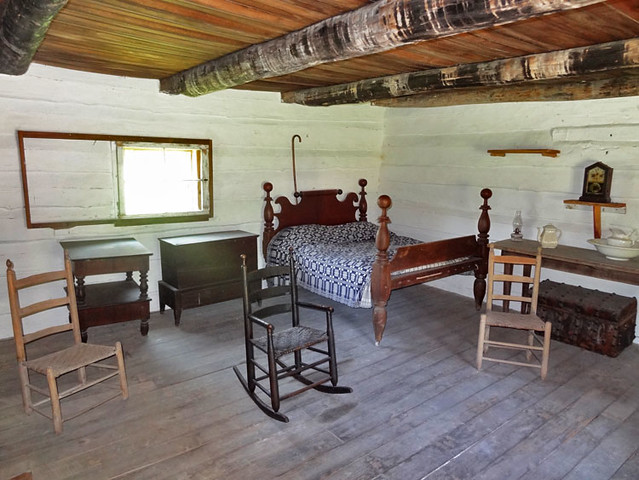 I was worried slavery would be glamorized in a place like this, but that was far from the case. One of the audio clips on the headset addresses the subject of whether Jackson was a “good” slave owner. I expected the narrator to say “Yes, he treated his slaves reasonably well, etc.” But instead, he said the answer is an unequivocal no, because there’s no such thing as a “good” slave owner. I found that viewpoint refreshing.

Andrew Jackson also drove thousands of Native Americans out of their home lands, so he was not exactly a big believer in the importance of racial diversity. But he made lasting contributions that helped put power in the hands of working class people. The Hermitage documents Jackson’s complicated legacy in fascinating fashion.

For another taste of early settler and pioneer life, visit Fort Nashborough, right in the heart of Nashville.

Note: I was a guest of Visit Music City at the Andrew Jackson Hermitage Mansion.