With its classic cars and old-fashioned way of life, Cuba is often viewed as a journey back in time. But there’s one way in which Cubans were way ahead of their time: the casa particular. Read on to learn about how to find a casa particular in Havana or Vinales.

The casa particular system was basically an early version of Airbnb. Starting in 1997, the Cuban government allowed locals to host tourists in their homes. Enterprising residents began setting aside bedrooms in their houses for foreigners as a way to rake in the dough.

Normally, going to a foreign country without having lodging booked in advance could be a disaster. But in Cuba you can just show up to a town and walk around looking for signs on houses.

The sign above this door is the “casa particular” symbol – it means they have a room for rent. The casa particular is basically a less-formal bed and breakfast. 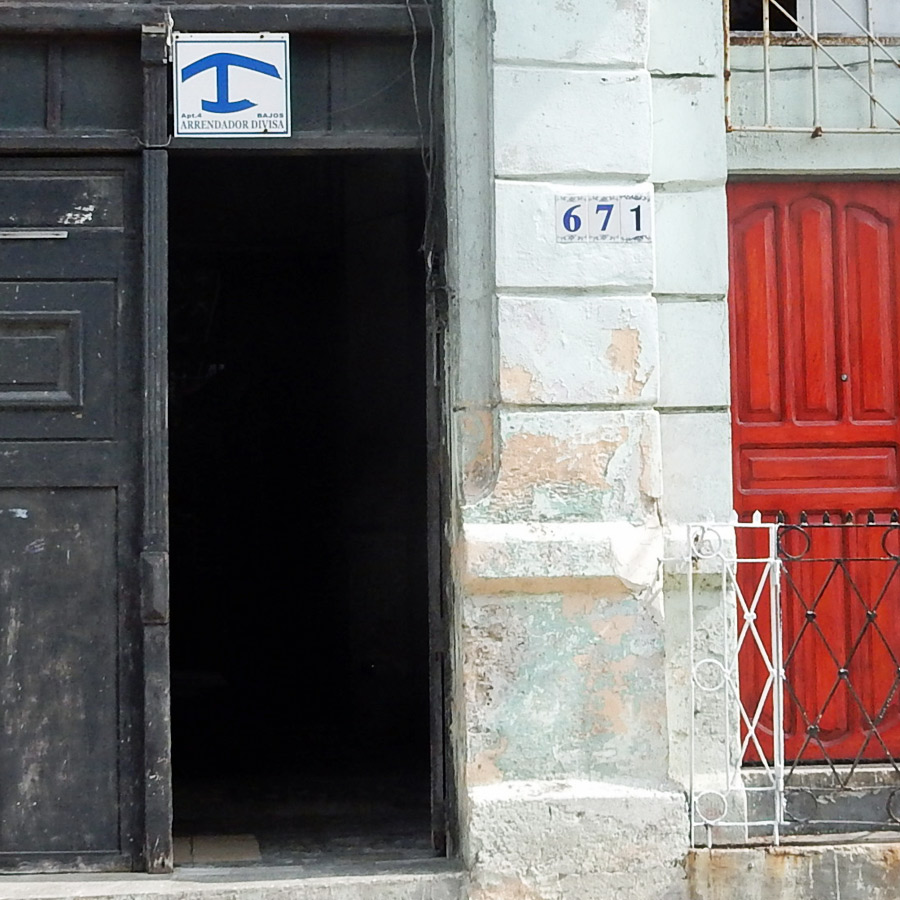 These signs are easy to find throughout the bigger cities in the country. Almost every street has at least a couple, and some streets in touristy towns like Viñales have more casa signs than you could possibly count.

How to Find a Casa Particular in Vinales 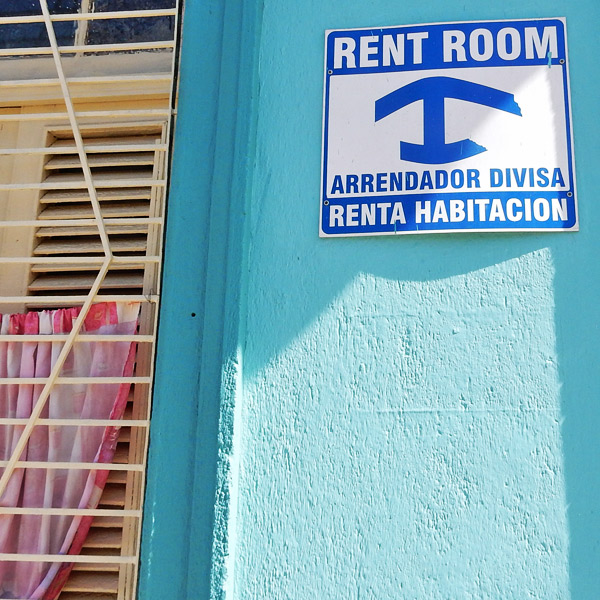 If you see this sign and you need lodging, just knock on the door and ask if their room is available for the night, then negotiate price. (Yes, in most cases, you will need to know some basic Spanish to be able to do this, although some casa hosts do speak English.)

Usually, if their room is not available, they will call nearby friends until they find someone who can host you. Hosts throughout the country are connected so there’s an endless network of referrals if you choose to make use of it. 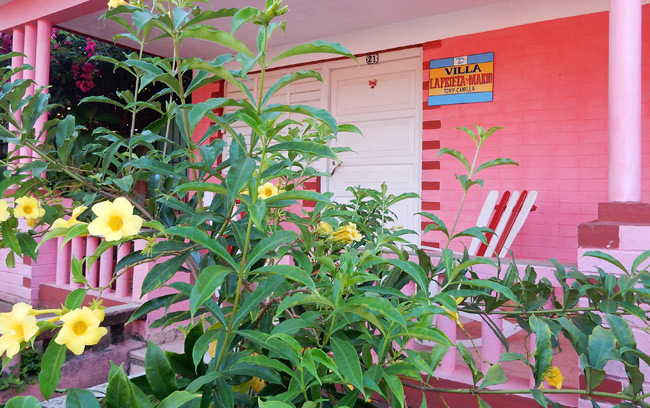 Don’t worry, Cuba isn’t especially dangerous, so it won’t seem weird if you’re wandering the streets with a backpack looking around at houses in search of a casa particular.

How I found lodging in Cuba

Forget the expensive hotels when you visit Cuba – stay with locals in casa particulares. Prices vary depending on location and your haggling skills, but my friend and I generally found rooms in the $20-25 range, which was super cheap for two people to split. 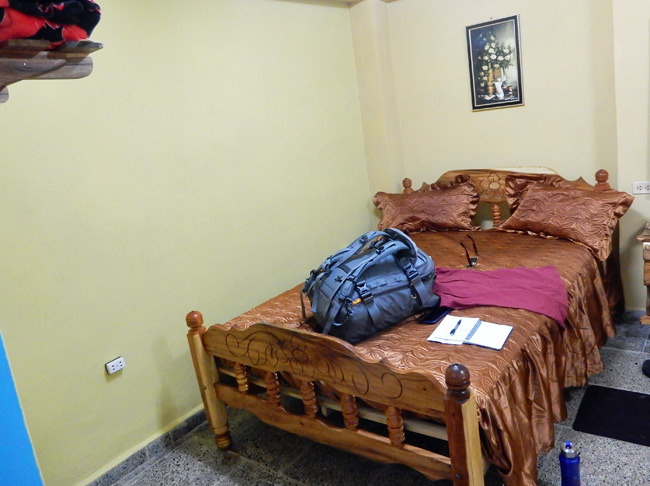 You can negotiate to some degree. If the host asks for $25 a night, you may be able to get them down to $20/night.

In both Havana and Viñales, we walked around town and knocked on doors until we found lodging. This is not always the best strategy. In Viñales, for instance, it was so hot and humid that we were ready to accept the first casa we could find without bothering to negotiate, because the heat had broken us down!

Not all hosts speak English, so be prepared to use your Spanish skills. Hosts are generally friendly, welcoming, and extremely helpful in providing suggestions for how to get around and what to see. 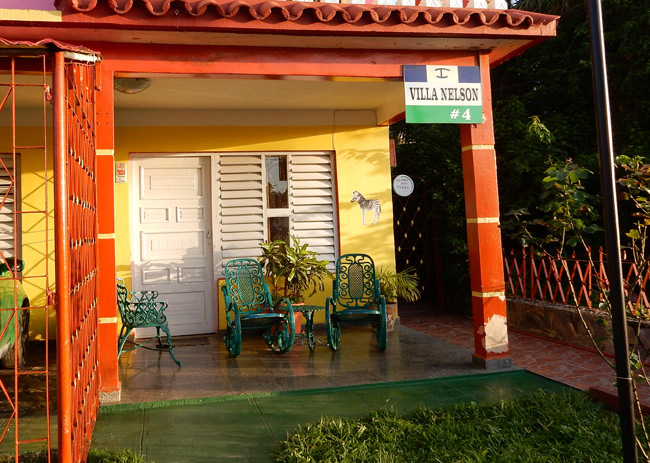 My Casa Particular in Havana

Of the four casas I stayed at, I did have one mildly bad experience, but it was minor. I got a host who was clearly in it for the money rather than the cultural exchange.

When we checked out, she offered to have her dad drive us to the bus station. We thought she was simply being friendly since we had stayed with her for three days. Instead, once we got there, she charged us $15, an absurd amount for what should have been a $3 taxi ride.

So just make sure to be clear with your host about what is included in the price and what is not. Usually, hosts will offer to serve you breakfast (often fruit and eggs) for $2-4 extra. It is up to you whether you want to accept that offer or find your own food.

The casa particular rooms are usually the nicest rooms in the entire house. Typically, these rooms have television and air conditioning, even when the rest of the house doesn’t have a/c. Hosts can make so much cash on these guests that they can afford to offer them some extra comforts.

The average monthly income of a Cuban is about $25 USD. Casa hosts can make that much by hosting people for a single night. It makes you wonder why every Cuban in the country doesn’t start hosting.

Of course, it’s not that simple – the government takes some of the money. But every single Cuban these days has the ability to be an entrepreneur.

Can you book a casa particular in advance? 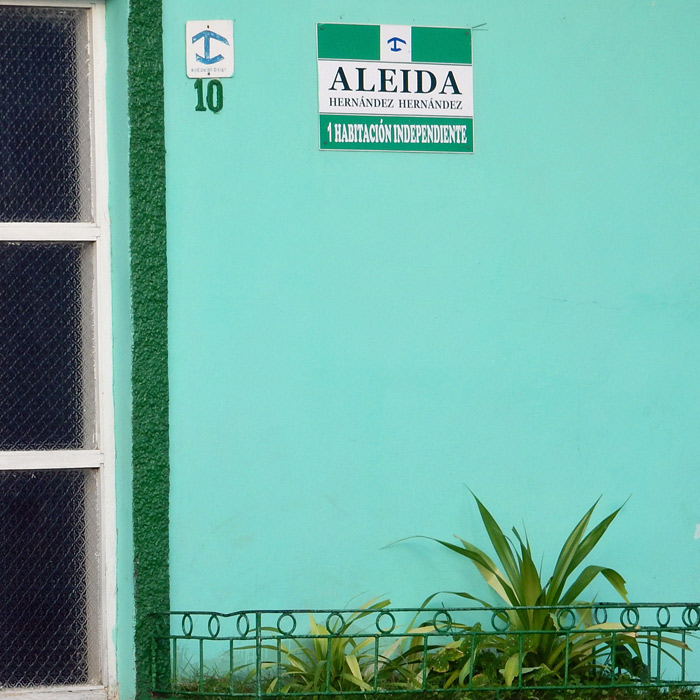 If the idea of wandering around aimlessly looking for a casa makes you nervous, you can try booking in advance instead. You can book them online on Airbnb and on other hostel websites. You may pay more by booking ahead, but at least you’ll guarantee yourself lodging and lock in the price.

Hosts are required to keep accurate records of every guest, so when you check in, be ready to hand over your passport for them to copy down your personal information. This is not a scam or a trick – the Cuban government requires these records. The casa particular system is secure and safe, so don’t be afraid to use it when you’re in Cuba!

Casa particular housing can be found all over the country, from Santiago to Trinidad, and pricing does vary somewhat. In the smaller towns that don’t see many tourists, prices will be lower.

In Havana, you can find a wide range depending on neighborhood and quality of accommodation (nicer areas like Vedado will charge more.) In a resort town like Varadero, the casa particular cost would be a bit more.

The only problem with booking in advance is that you will need to be sure you know how and where to meet your host when you arrive in Cuba. Wifi in Cuba is sparse, and most hosts only have internet access for a few minutes each day. So you won’t be able to text back and forth with your host once you’re in Cuba.

Do you have experience looking for a casa particular in Havana or Vinales?