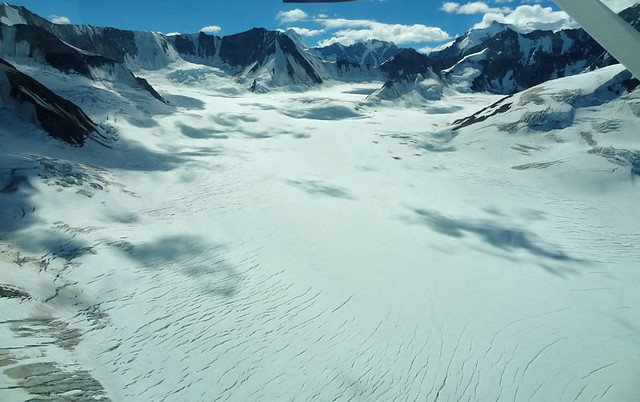 The pilot knows what he’s doing, I remind myself. Sure, it may seem like our tiny plane is uncomfortably close to the mountain, but we’re actually a safe distance away.

We’re right in the heart of the mountain range. I’m flightseeing in Kluane National Park, a massive park in southern Yukon, Canada that stretches all the way to the Alaska border. And the pilot is flying between the mountain peaks, giving us a chance to see them from very close range.

The aircraft has room for just the four of us, making it the smallest plane I’ve ever flown in. My mind is racing as we weave in and out of majestic, snow-covered peaks. I’m nervous about being in such a small plane, feeling the winds whip against the aircraft.

I’m awestruck at the views and amazed that these mountaintops are the same elevation as our plane. And I feel fortunate that I’m getting to have this Kluane flightseeing experience.

How do you get to Kluane National Park? How much is a flightseeing tour and how long does it last? Which companies offer Kluane flightseeing? Let’s dive in to all these questions as I share a bunch of photos from my own experience.

Kluane (clue-on’-eee) was established in 1972 and covers 8500 square miles. It’s only a 90-minute drive from Whitehorse, the capital of Canada’s Yukon territory. 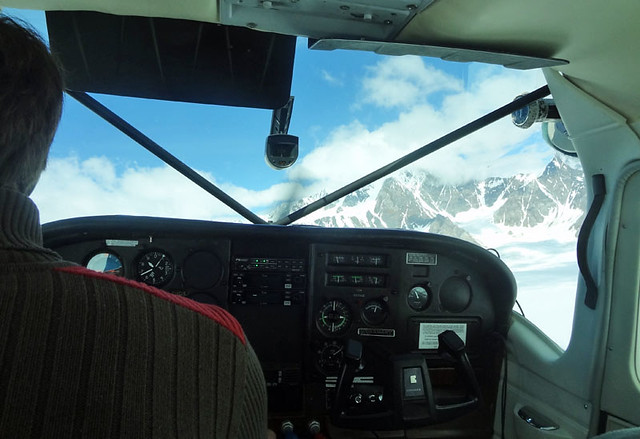 The entire Kluane / Wrangell-St. Elias / Glacier Bay / Tatshenshini-Alsek area is part of a UNESCO World Heritage Site. The region is recognized for its incredible landscapes, ranging from glaciers and mountains to alpine forest and coastline areas. It has the largest icefield in the world outside of the polar regions.

Kluane has many of North America’s highest peaks, including Mount Logan (19,551 feet), the highest mountain in Canada. The overwhelming majority of Kluane isn’t accessible by road. That makes it a perfect place for a plane ride!

How do you get to Kluane? The drive from Whitehorse (the capital of Yukon) is 95 miles (153 km) and takes about an hour and 45 minutes to reach the visitor center.

Most Kluane flightseeing tours depart from Haines Junction, a town in western Yukon that you can easily incorporate into a summer Yukon road trip.

The deeper you fly into the park, the closer you can get to Mt. Logan. But you can still see it on some of the shorter flights.

Here’s a list of some of the most popular Kluane flightseeing companies. This may not be an exhaustive list, but it includes the major companies, with accurate prices as of the 2023 season.

Kluane Glacier Air Tours: The company conveniently offers 4 different flight options, ranging from 60 minutes to 2 hours, depending how far into the park you want to fly, and much you want to spend. Prices range from $320 to $580 CAD per person. I flew with this company and highly recommend them.

Rocking Star Adventures: Rocking Star offers multiple Kluane tours as well, from $200 to $530. The cheapest option is a a 45-minute tour that just goes to the toe of two glaciers, so it could be a good option for folks on a tighter budget.

Go North: This company offers a couple of flights in Kluane. Currently, their website does not list prices.

The first part of the flight with Kluane Glacier Air Tours takes us over hilly, grassy terrain along the river. During this part of the flight, we excitedly scan the ground below for any signs of bears or moose or other wildlife, but luck isn’t with us on this day.

Still, it’s cool that the pilot dips low to give us a close look at the interior of Kluane National Park, which most people don’t get to see since there aren’t that many roads or trails running through the place. If there were any bears playing along the water, we would surely see them. 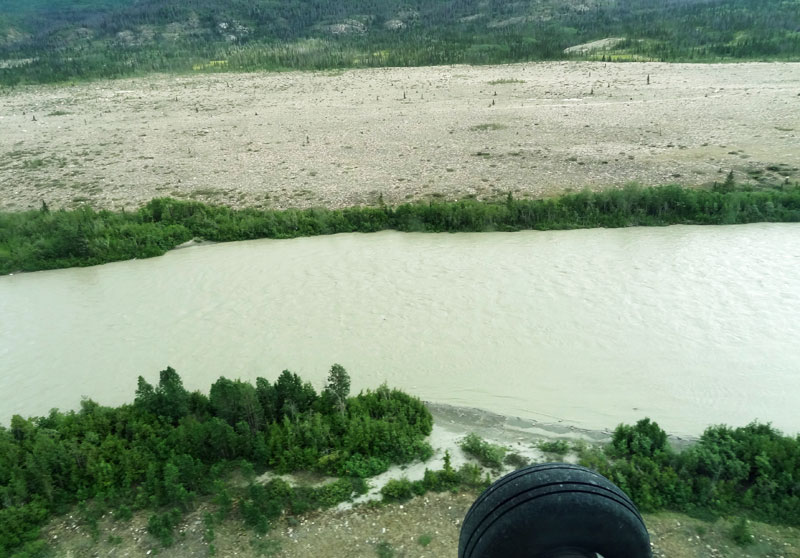 Before long, a chill starts to creep in through the small gaps in the windows and frame of the plane, and the water below us starts to turn to ice. We pass a few glaciers, including some that are breaking off into the water. It’s not long before the entire horizon is white and the icefields come into view. 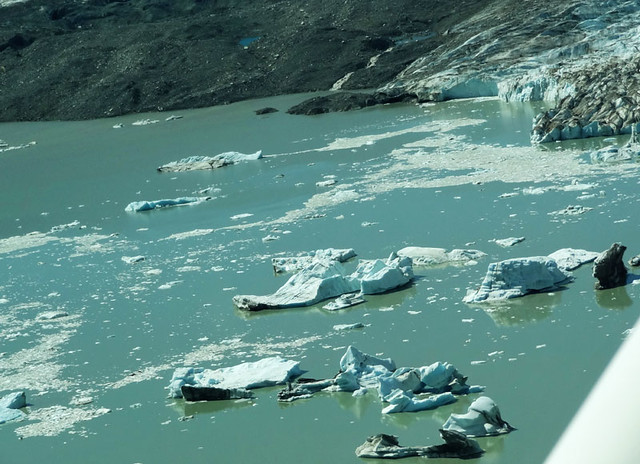 Just when I begin to think that we’re so far removed from civilization that humans would never make it out this far, I look down and spot three individuals dragging packs across the snowy ground. Whoa!

The truly adventurous can take helicopters or glacier-landing flights into the park and camp out here for several days if they wish. That’s apparently what these crazy brave folks are doing.

At least a quarter-mile separates the first two people from the one pulling up the rear. Either these three are having some sort of argument, or one of them is just really slow. “Come on Paul, stop slowing us down! You’re the one who dragged us out here in the middle of nowhere in the first place!”

The pilot watches closely to make sure these people are supposed to be out here. He concludes that they aren’t in need of rescue, since they’re methodically hiking forward rather than frantically waving for help. So we swing around to the right and begin the loop back to the airport.

Once again, I get a little freaked out when it appears that we’re headed straight for a head-on collision with a mountain in front of us. Turn! Now! I think to myself as the pilot casually stares out the window in another direction. 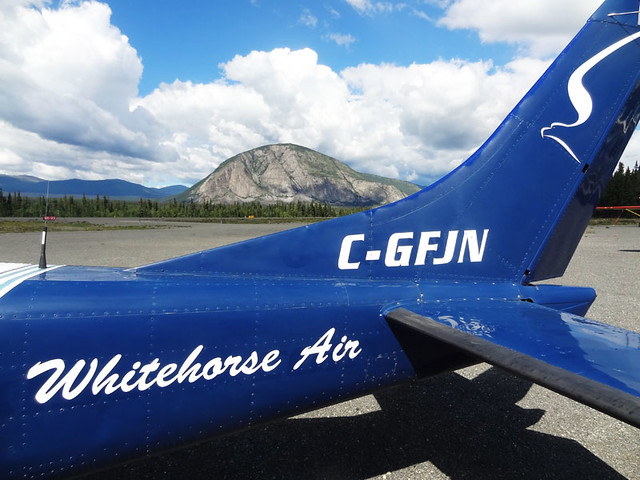 Of course, he makes the turn in plenty of time, and we’re never in any danger of hitting the mountain. I suppose I just have serious depth issues when it comes to bush planes.

That’s one of my major takeaways from this flightseeing trip. Besides the fact that the views of Kluane from the plane are spectacular, I learn conclusively that I would not make a good pilot. The passenger seat is where I belong.

Flightseeing is the best way to see the remarkable landscape of Kluane National Park. While you’re visiting the Yukon, check out other unique attractions, like the Bordertown Garage and Museum, the Whitehorse Fish Ladder, and the fun town of Dawson City.

Note: My Kluane flightseeing experience was provided by Tourism Yukon.