I had imagined that landing in a little plane on a glacier would be bumpy and scary, but it could not have been more smooth as we touched down and the sled-like contraptions on the wheels helped us glide to a stop. Soon, all was calm as our group of 12 passengers got out and looked around at the incredible landscape of mountains, valleys and glaciers sprawled around us.

My trip with Talkeetna Air Taxi was one of the coolest experiences I’ve ever had while traveling.

As its name suggests, Talkeetna Air Taxi is based out of Talkeetna, the quirky town you’ll definitely want to visit while you’re in Alaska. The company offers daily flights into Denali National Park and around the summits of the big peaks. I had the pleasure of taking the Grand Denali flight to see Mt. McKinley (also referred to as Denali), the highest mountain in North America at 20,320 feet.

This was my first time ever on a smaller plane. I was slightly nervous, but logic put those fears to rest. These guys do this every day, after all. And for some reason, hearing about a pilot’s wife and kids is always reassuring. Oh, he has a family, he’ll be careful so he can go back home to them! 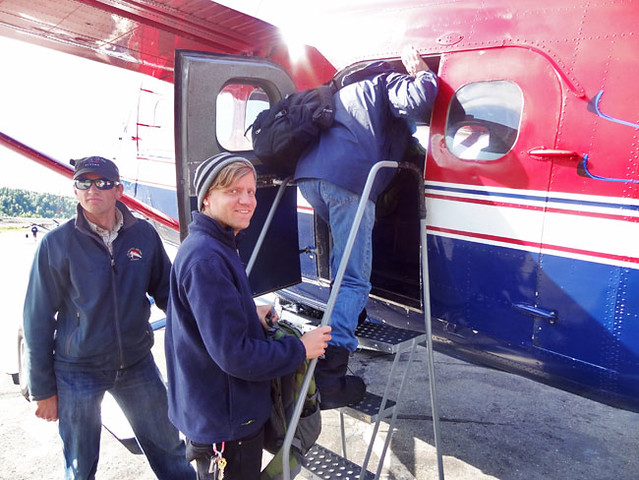 All the readings in the cockpit look good to me. Not that I’d know if they weren’t. 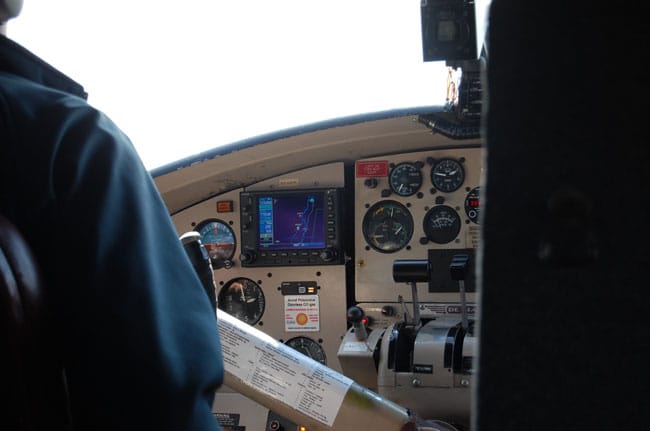 Getting into the air was a thrill. Everything was so green and wide-open. I pictured the bears and caribou and moose frolicking through this endless, person-less land. Maybe they don’t really frolic, but I like that visual image. 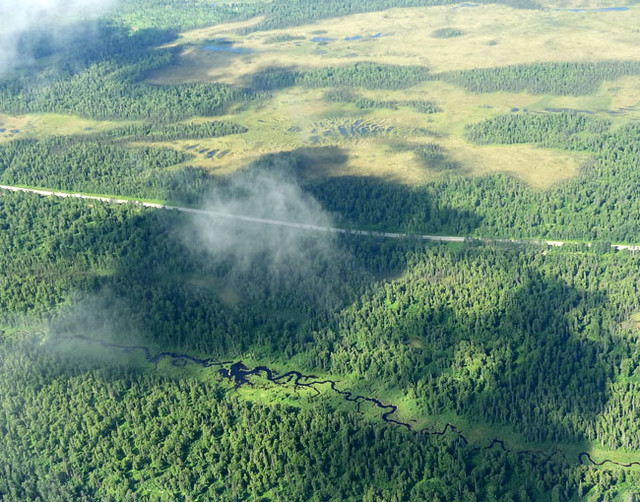 Before long, we started to approach the mountains and everything turned to white. Through the fog, we saw the first peaks peeking out. 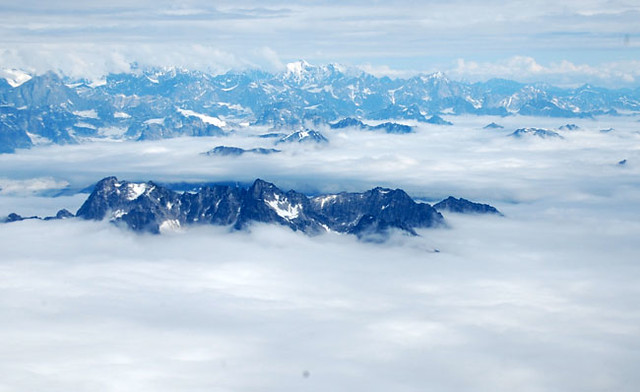 Some of the ponds were a brilliant bright aqua color. I suppose that’s how water looks when it’s thousands of years old and surrounded by snow. 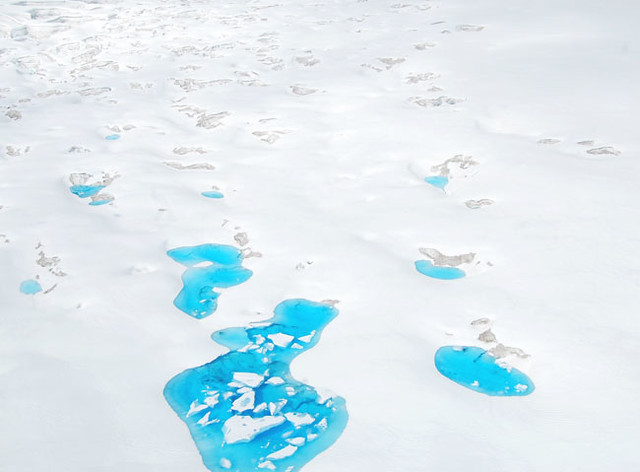 It was snowy all around, with an endless array of stunning views. 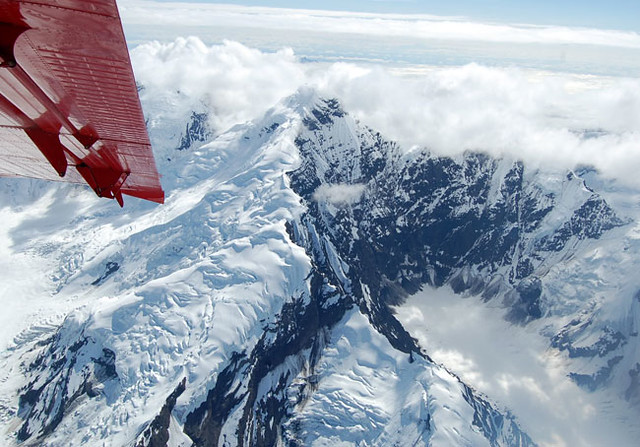 And then it came into view. The peak formerly known as McKinley. It was too cloudy to see Denali all three days I camped in Denali National Park, so the view from the plane was my first and only glimpse of the great mountain. 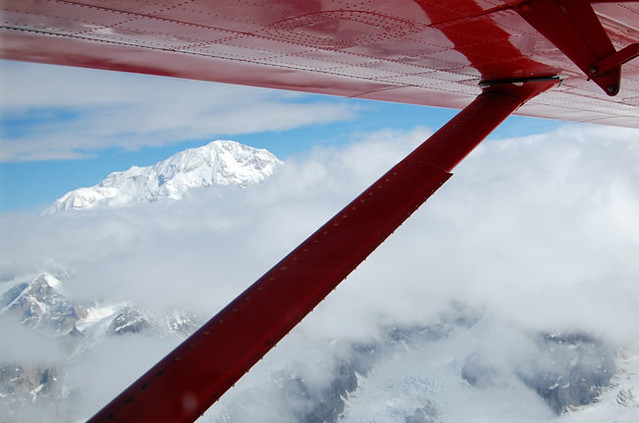 The pilot circled a few times to make sure passengers on both sides of the plane got clear views of McKinley. The view coming from this side is a bit different than the typical view Denali visitors see from inside the park. 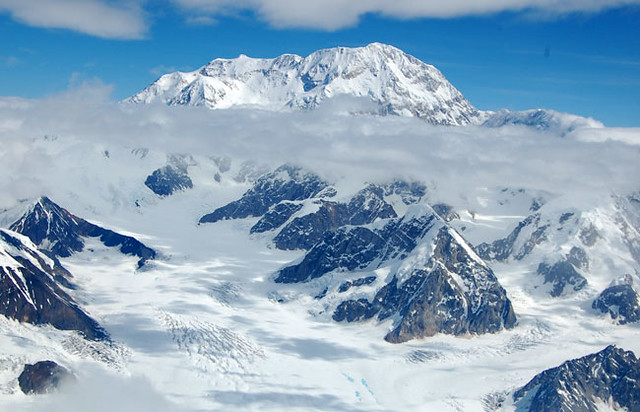 Then it was off to the home of the Ruth Glacier: the Don Sheldon Amphitheater, a valley with a snowy landing strip perfect for stopping to let tourists take in the beautiful surroundings. Victory is mine! 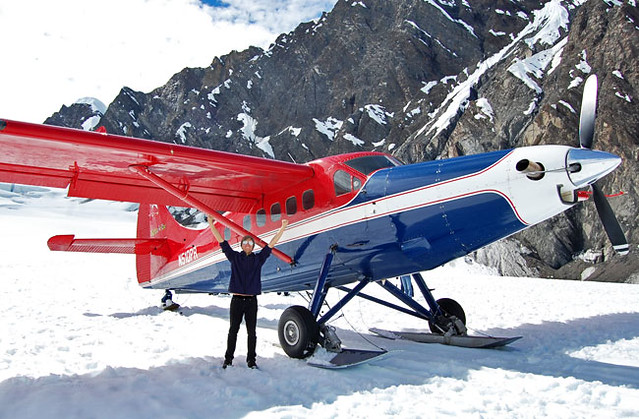 The sled wheels were fascinating. I wonder well how this thing would stop without them… 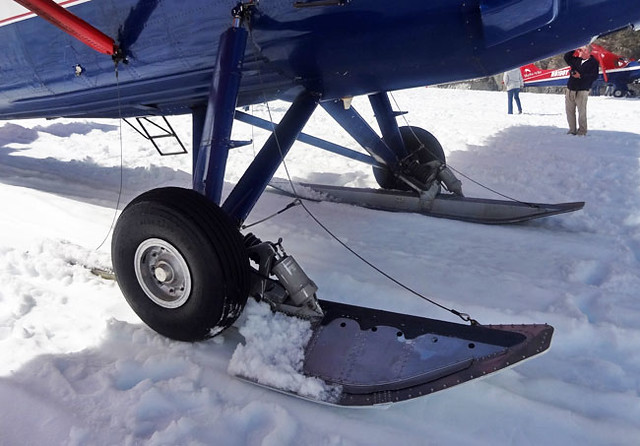 Standing on the glacier, I could hear rockslides on a nearby mountain, but otherwise it was mostly calm and still. It was such a magical feeling to be surrounded by this much snow and ancient ice, especially when my friends back home in Chicago were dealing with 100+ degree temperatures. 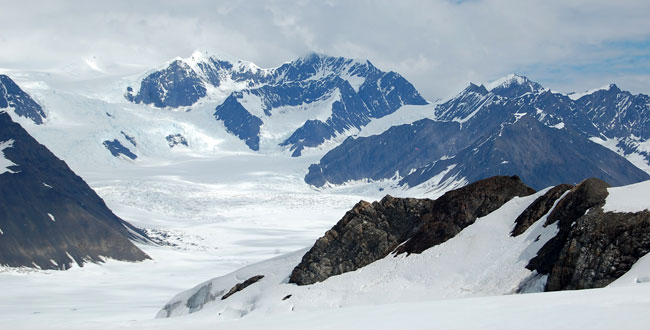 There’s a cabin on one of the hills (the Don Sheldon House) that you can rent by the night. How amazing would it be to get flown in by plane, hike up and spend the night in the middle of this setting, in complete isolation? 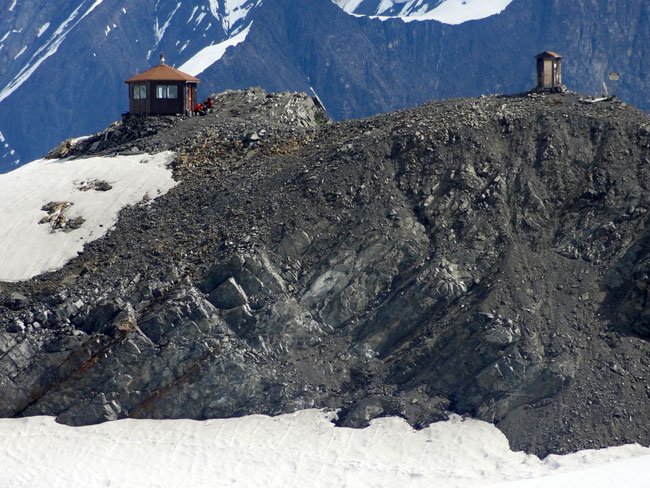 Basics of flightseeing in Alaska

Flightseeing is one of the coolest activities you can do in Alaska. Given that the overwhelming majority of the state is inaccessible by road, you have to get up in the air to truly take in the beauty of this place.

Flightseeing trips can cost a few dollars, but there are a number of different options available for various budgets. Prices range from a few hundred dollars for a glacier landing and trip around the summit of McKinley to shorter trips in the Anchorage area in the $100 range. And many companies offer online specials, so keep your eyes open. 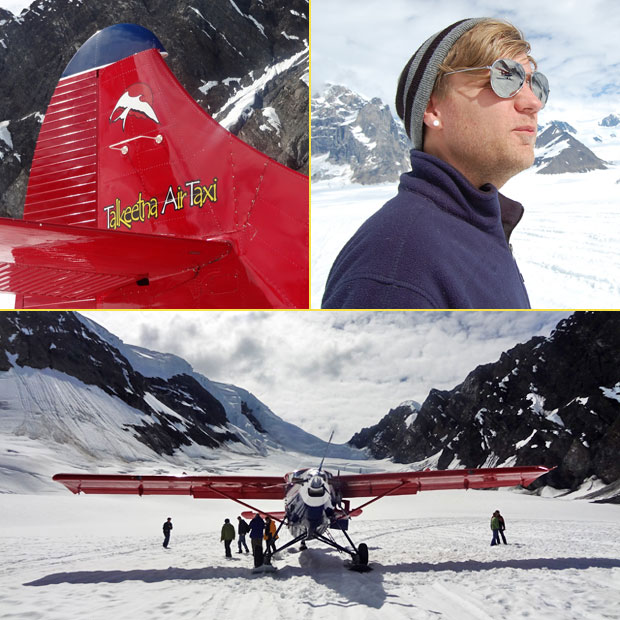 A number of different flightseeing companies do business in Anchorage, Talkeetna and elsewhere. Based on my research, Talkeetna Air Taxi seemed to be the most reputable and most popular. They’ve been around since 1947, so they know what they’re doing, which is critical. If you’re landing on glaciers, you want someone you can trust, who’s been there, done that.

If Alaska is in your budget, you really should splurge for a flightseeing trip. It’s an incredible life experience.

READ NEXT
Eating Cheaply in Iceland: How I Spent Less Than $150 on Food in Nine Days

Disclaimer: I was a guest of Talkeetna Air Taxi. You can find them online at www.talkeetnaair.com and on their Facebook page.