You haven’t lived ’til you’ve visited a museum full of dead gophers dressed as humans. Who hasn’t dreamed of seeing stuffed gophers recreating a curling scene? 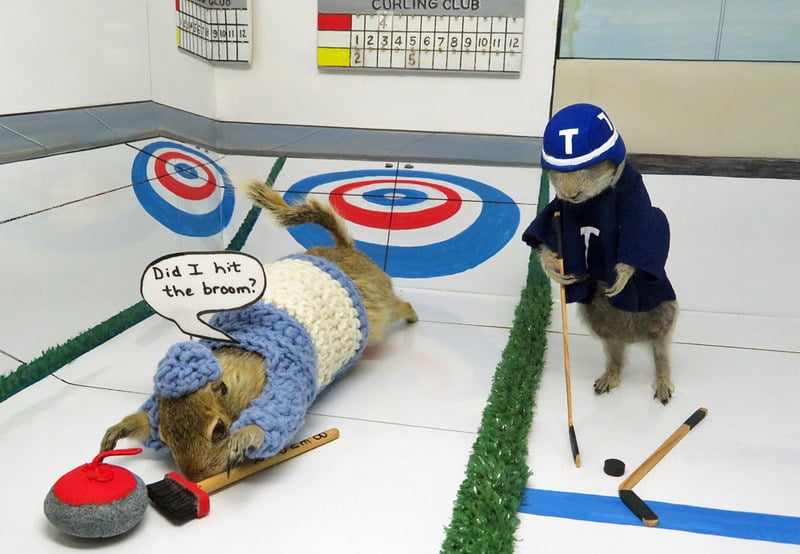 Literally the entire facility consists of these mini-scenes of taxidermied critters enjoying human life and wearing human clothes. It is bizarre, and wonderful at the same time.

There are gophers on a picnic, gophers hunting in the woods, gophers in a train station, gophers in church, gopher Mounted Police. Even a rousing card game at the senior center! 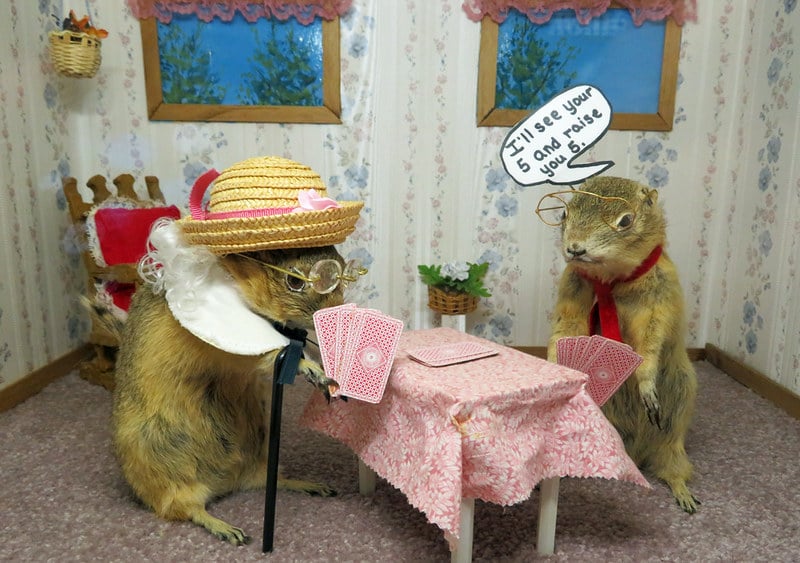 I’ve been dying to visit this kooky place since Raymond from Man on the Lam wrote about it years ago. Last year’s road trip through the Canadian prairies finally gave me the opportunity to stop by.

Read on to discover what I saw at Alberta’s famous Gopher Hole Museum, and to see the photos of many of the little gopher scenes.

The small museum costs only two bucks to enter. The little scenes are placed inside a small boxes. These dioramas are placed all around the room. 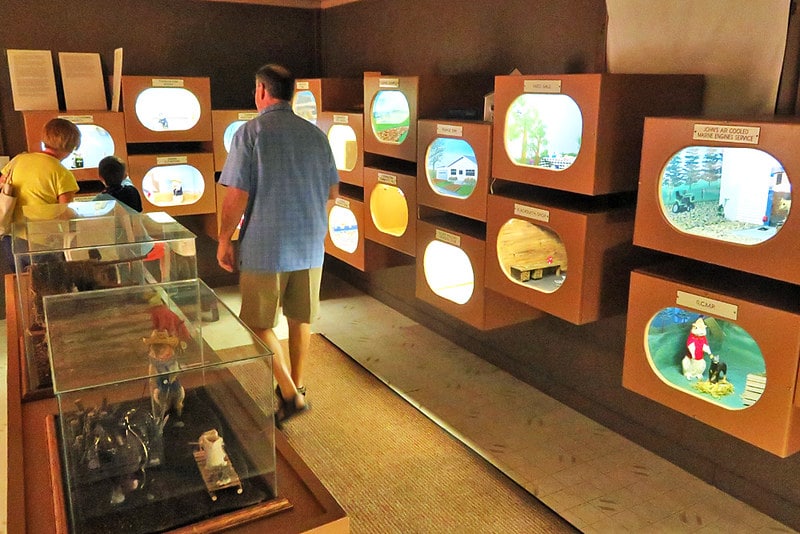 It’s easy to see how much fun the curators had with these scenes. The gophers are like little Barbie dolls, which can be dressed up and manipulated to create any sort of scene they want.

Like a beautifully touching wedding. I see a promising future for these two. I’m guessing neither one is going anywhere for a long, long time. 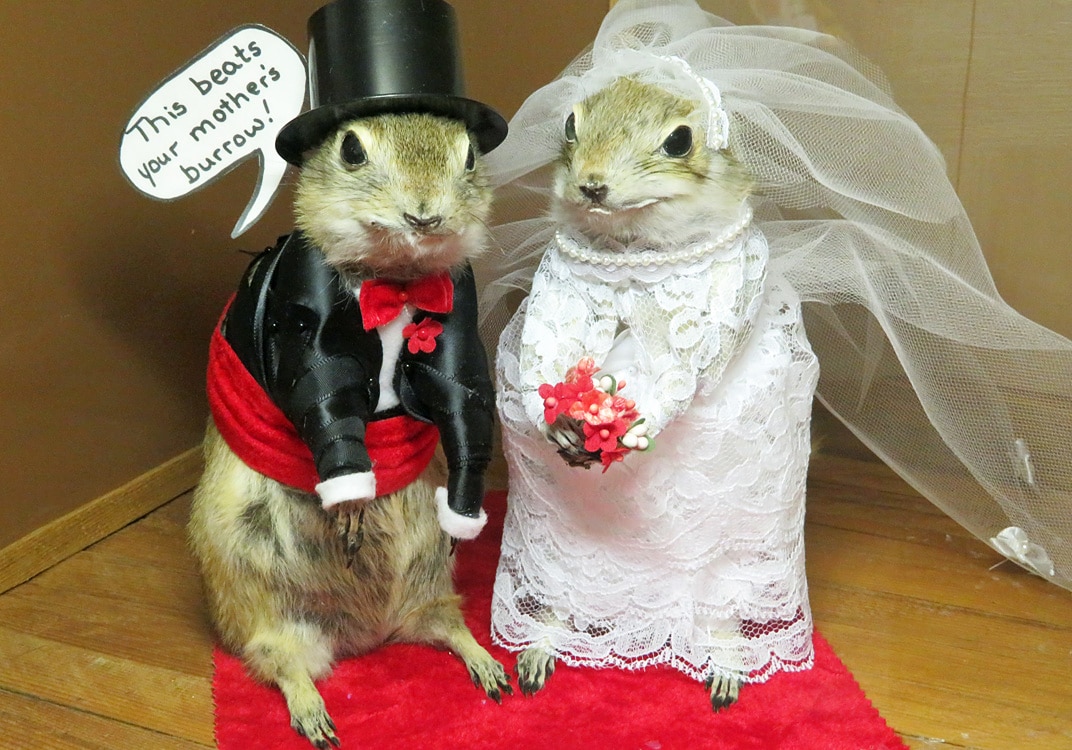 Meet the James Dean of gophers. Young rodents in love! I hope that motorcycle is big enough for two. 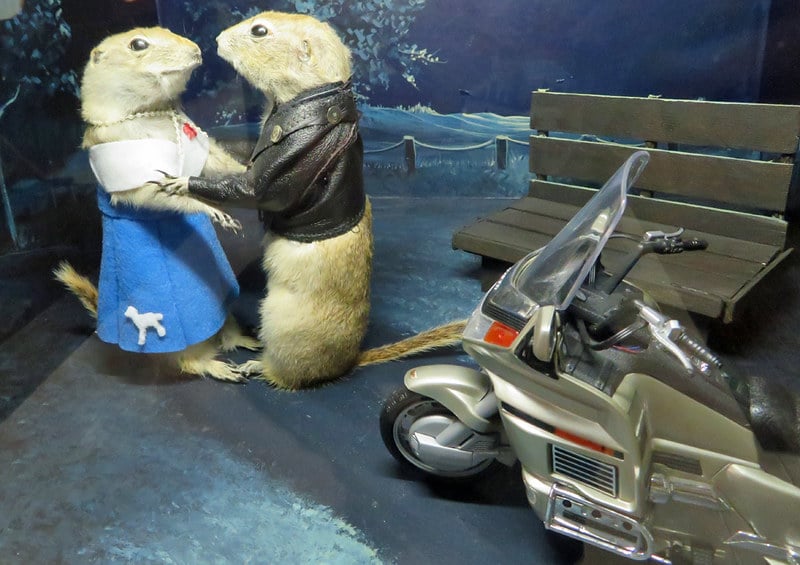 Blacksmith hard at work. These little pieces of iron are impossibly small.

It’s an old tyme jamboree! This band looks cool, but I bet they could take things to the next level if they added a banjo player. And maybe even a drummer. 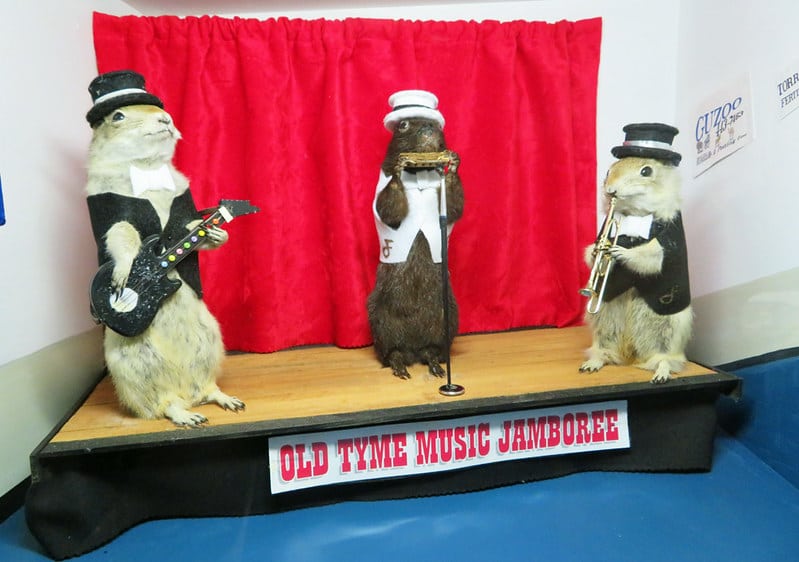 The money bags, the office door plate, the flowers on the dress, the trees on the painting. Even the diamond-shaped tiles on the floor! 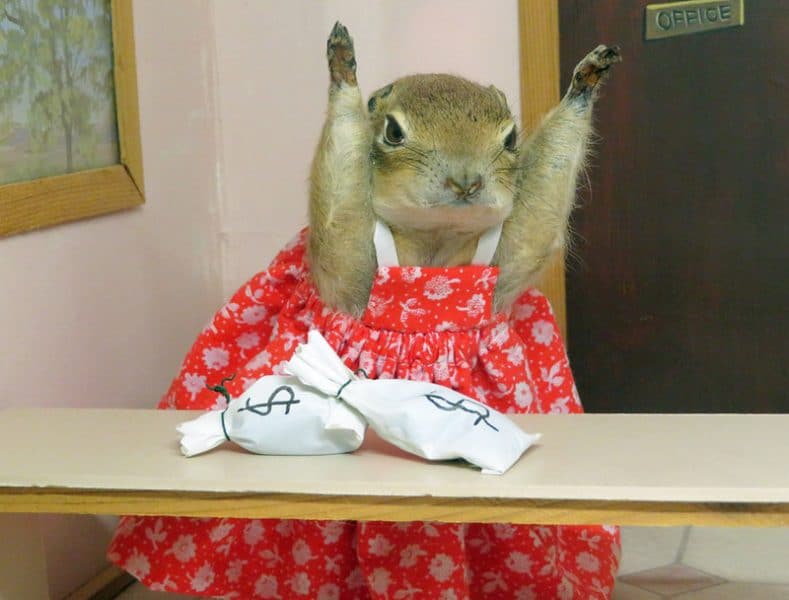 The cashier I spoke with said they don’t add new gophers often, which was disappointing, because I think adding new scenes would be the best way to turn one-time guests into repeat visitors.

However, it’s clear that they do occasionally make updates, because they had this one in honor of Canada’s 150th anniversary, which was celebrated in the summer of 2017: 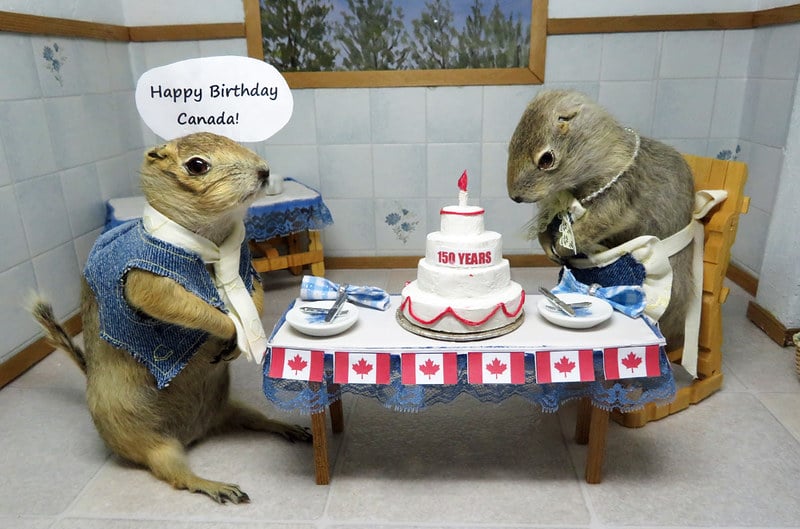 Here’s a First Nations gopher with an impressive fire pit: 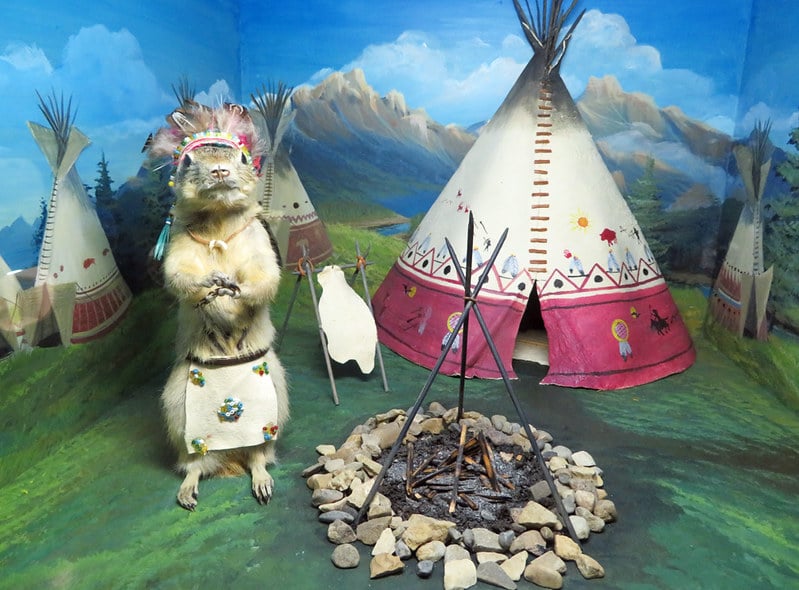 Some of the gophers have snarky thought bubbles. There’s no need to be sarcastic, Gloria – I think your client looks fabulous! 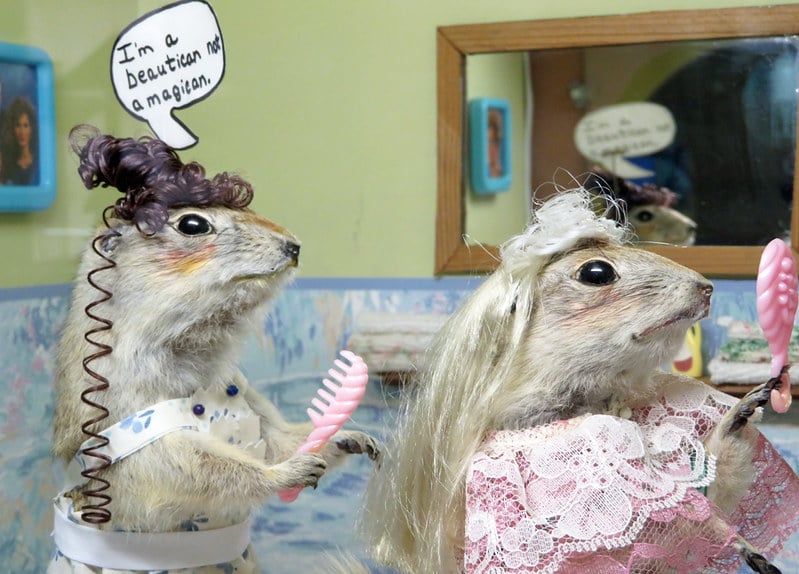 Here’s a hiker or safari visitor with a tiny butterfly caught in a tiny net. 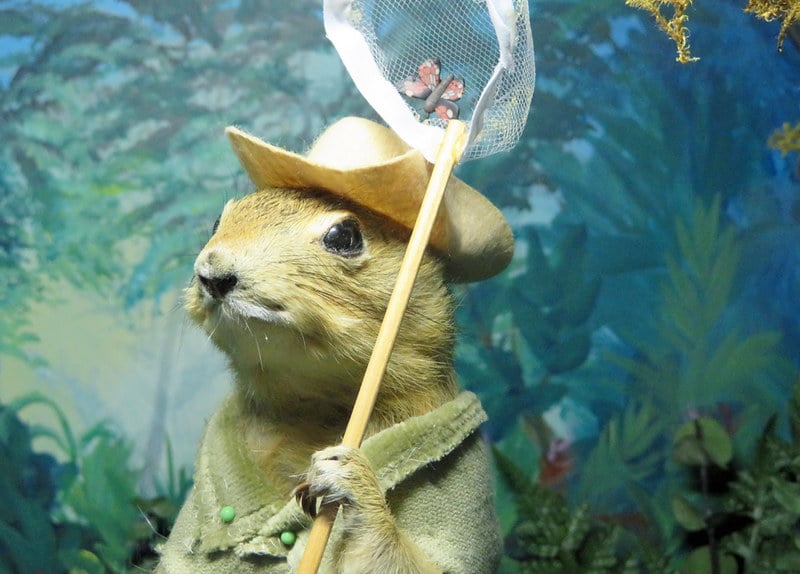 It’s time for a gopher fashion show! I’m afraid these two could use some help from Gloria the beautician. 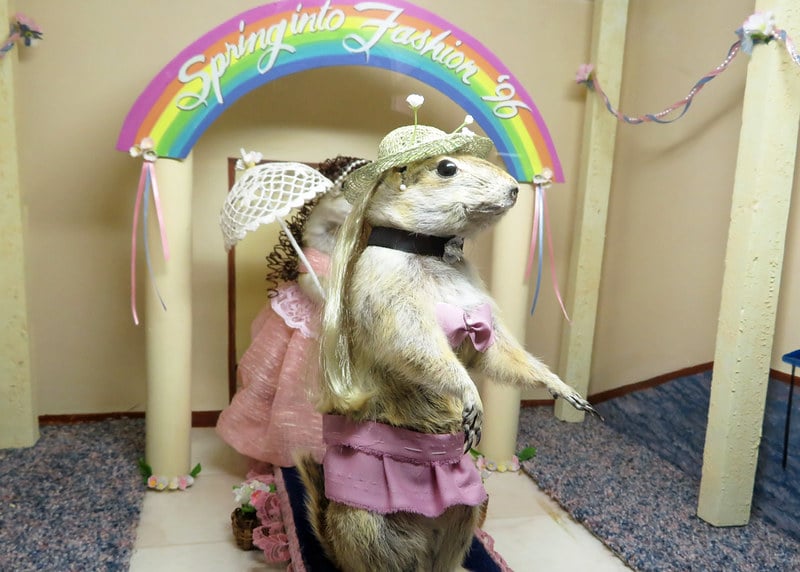 Where do the gophers come from? I wondered if there was some formal process for obtaining dead gophers, but I was told their collection is just kind of random.

Someone may shoot one, or they may find a dead gopher outside their home. Everyone in the small town knows about the museum, so any deceased rodents end up getting forwarded to this place. 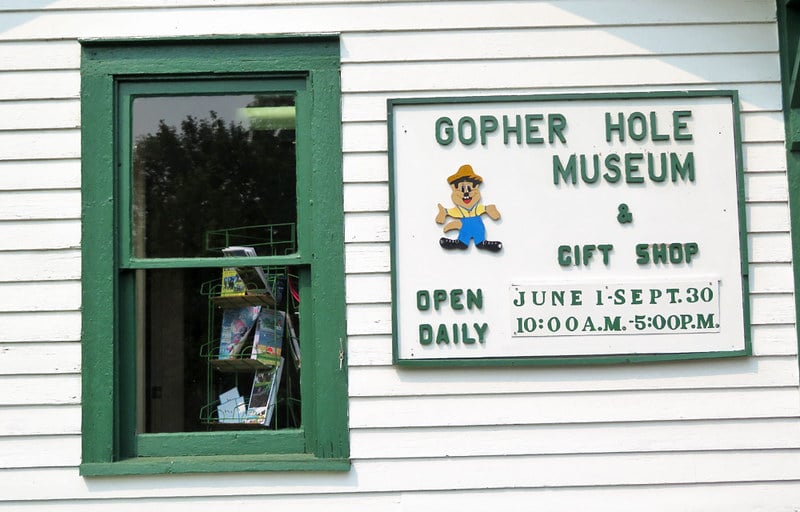 For another quirky Albert attraction, check out Head-Smashed-In Buffalo Jump. And take a look at our list of recommended things to do in Jasper National Park!

Address: 208 1 St S, Torrington, Alberta T0M2B0, Canada (Google Map)
Cost: $2
When to Visit: Open everyday 10am-5pm between June 1-September 30. Closed the rest of the year, but they promise to do their best to accommodate folks who show up outside of that date range. Call them (403-631-2133) to see if they have someone available to show you around.
Website: http://gopherholemuseum.ca (unofficial)
Budget Lodging Nearby: Motel8
Upscale Lodging Nearby: Pomeroy Inn & Suites
Further Reading: Gophers: Animals of Mass Destruction (Amazon) 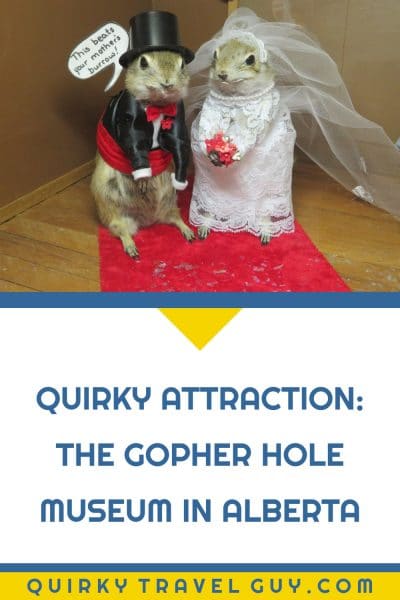