Grand Canyon National Park in Arizona is best-known for its amazing views and exposed ancient rock, but the national park is home to 447 different birds, 91 types of mammals and 58 reptile and amphibian species. Everything from mountains lions to snakes to bears (yes, bears!)

Perhaps you’ll be lucky enough to see some of this Grand Canyon wildlife on your visit. Here’s the lowdown on a few animals to look out for during your visit!

Did you know the Grand Canyon has more mammal species than Yellowstone? It’s true… but most of the Canyon’s mammals stay hidden, so you’re unlikely to see them. Here’s a rundown of some of the park’s warm-blooded critters.

Bighorn sheep
I love me some bighorn sheep. I like that they’re only found in very specific high-altitude locations. The national park most known for bighorn sheep might be the Badlands, but there are lots at the Grand Canyon too.

They are typically found at the South Rim, so if you visit the North Rim you’re less likely to see them. Sometimes, they even walk right out into roads and trails, leaving drivers and hikers with great footage of up-close wildlife encounters.

In my research, I was only able to find a couple confirmed bear sightings ever within park boundaries, and those were actually in the western side of the park down on the river. (There used to be a PDF available online with photos of bears in this area, but unfortunately, this link no longer exists.)

The existence of bears here is an interesting fact about the Grand Canyon that most people don’t know. Use this piece of knowledge to impress your friends at parties!

Squirrels
Both rims are home to various kinds of squirrels. The unique Kaibab squirrel, which has a black belly and white tail, lives in the North Rim and can be found only in Northern Arizona.

I spotted a few squirrels hiding behind tree branches, but I don’t believe any were of the Kaibab variety, even though I hiked the North Kaibab Trail. 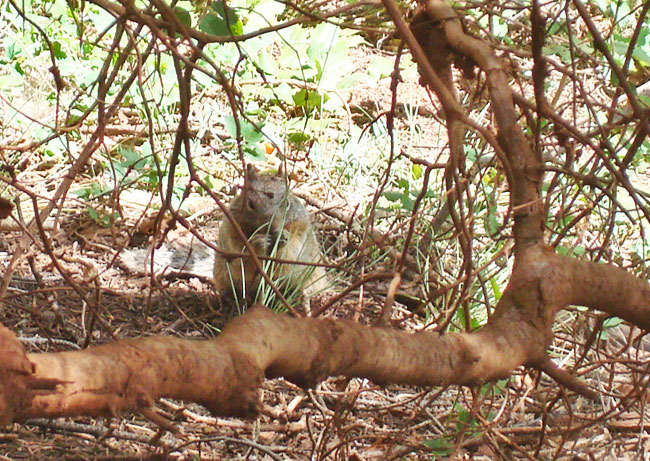 Mountain Lions
The NPS page on the Grand Canyon warns that solo hikers may be at risk for attack by mountain lions, but there has never been a known attack at the canyon. Mountain lions (pumas/cougars/panthers) are commonly found on both sides of the park.

In theory, mountain lions are among the most dangerous animals in the Grand Canyon. But since they keep their distance, visitors don’t see these animals often.

Most serious hikers never see a mountain lion their entire lives. The North Rim has an estimated 100 mountain lions.

Mule Deer
At the North Rim, deer are the most common form of wildlife. You’ll likely see them on the grassy and forested areas along the ride when you drive into the park. 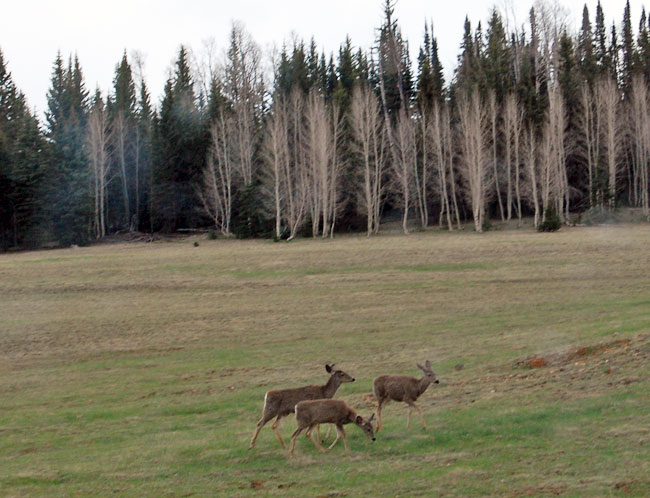 Grand Canyon Bats
There are currently 22 species of bats in the Grand Canyon. Who even knew there were that many bat species in existence?!

Bats are a little creepy, but they help us in this environment by eating insects, especially mosquitoes. Some of the bats here even eat fish.

Other Common Mammals at the Grand Canyon
Bison can be found at the North Rim. Elk, pronghorns, and coyote are present here too, but you’re more likely to see smaller animals.

Think skunks, raccoons, porcupines, bobcats, foxes, rabbits, badgers, gophers, prairie dogs, and beavers. Among the mammals found in the national park are 51 different rodents, so watch for rodents, mice, and voles scurrying about.

You may be also lucky enough to spot a javelina (a small mammal that resembles a wild pig) or a ringtail (which looks like a cat with a long striped tail.) Javelinas are also common in Saguaro National Park, further south in Arizona.

Are There Moose at the Grand Canyon?

California condors
These rare birds (only a few hundred remain in the world) may be spotted flying around the canyon. One of my biggest wildlife thrills ever came several years ago when I saw a condor sitting on a rock just 15 feet away from me at the North Rim.

At the time, less than 200 condors existed in the wild, so it was thrilling to see one so close!

The ranger told gawkers that the bird actually shouldn’t let people get so close, and he was worried about it. The bird, number A7, as you can see from its marking, had flown away by the time I returned 20 minutes later.

Look for condors flying around above the rims. Condors are probably the most noteworthy endangered species in the Grand Canyon.

Bald eagles
The symbol of America has made a great comeback over the past few decades. Now you can see bald eagles at the Grand Canyon, especially down along the Colorado River where they hunt for tasty fish.

Other Canyon birds
Birds of prey abound at the Grand Canyon, which makes sense since there are so many rodents and small animals for them to eat. Several species of hawks, peregrine falcons, and Mexican spotted owls all live in and above the Canyon.

Lizards
Geckos, the cutest lizard if you ask me, are found along the Colorado River. A threatened species, the desert gopher tortoise, is found in the scrub in the western side of the park.

In terms of more visible creatures, the mountain short-horned lizard is abundant around the forests near the rim. You’ll probably spot a few if you do any hiking into the Grand Canyon, along with salamanders and toads.

Snakes and scorpions
Always watch where you’re walking. Snake bites are rare but can happen. Six species of rattlesnakes live in the park, mostly in the interior of the canyon.

Scorpions are seen often in the canyon and according to the NPS site, “stings occur with regularity.” They may hurt but rarely cause serious damage. These aren’t the scorpions that can deliver a fatal bite.

Gila monster
The unique gila monster can be found in the desert areas and western section of the park. This large lizard can reach two feet long and weigh five pounds. They are venomous creatures. A gila monster bite will not be fatal to a human (but it will hurt a lot!)

Other reptiles and amphibians
Only 10 species of amphibians live at the Canyon, and all are toads, frogs, and salamanders. Other reptile species here include garter snakes and the desert tortoise.

Other Animals in the Grand Canyon

You may run across lots of different kinds of spiders at the higher elevations, including black widows and tarantulas. Scary! And if you make it to the river, you may encounter all kinds of fish and mussels.

And of course, there are the numerous butterflies, dragonflies, beetles, and insects. The animals in the Grand Canyon are much more diverse than many people would expect.

Remember to exercise common sense when it comes to wildlife. Keep your distance from large mammals or dangerous snakes and spiders. Keep your backpack closed to avoid theft of food by raccoons and squirrels. And take pictures only when you’re at a safe distance.

The Grand Canyon is one of the best places to see animals in the wild in the American Southwest. So keep your eyes and ears open, and your cameras ready!

What forms of Grand Canyon wildlife would you like to see if you visited this iconic national park?