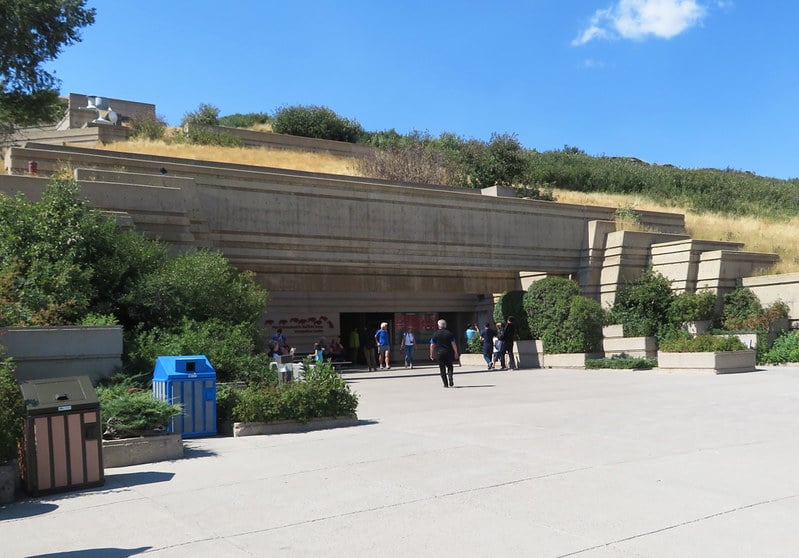 One of the most ingenious hunting practices in human history was the buffalo jump, which involved driving massive groups of buffalo off a cliff, then collecting the bodies for meat, hides, and other essential uses.

The Head-Smashed-In Buffalo Jump site in southern Alberta, Canada is among the most well-preserved buffalo jumps in North America. As such, it has been given the rare UNESCO World Heritage Site designation.

Visitors can walk right up to the ledge where native Blackfoot hunters would lead the buffalo to their demise. They can also walk on a trail down at the bottom of the hill where the bodies landed. 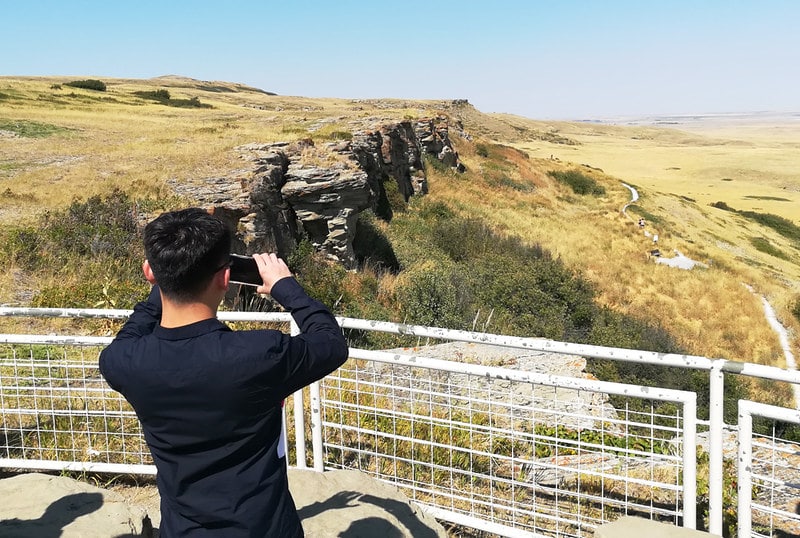 Interestingly, the cliff doesn’t look all that tall. The hillside is only about 36 feet high these days. It used to be double that height, but the buildup of bone fragments and debris at the bottom after nearly 6000 years of use has cut down on its vertical distance over time.

That modest height meant that some buffalo endured the fall, injured but alive. Hunters were positioned at the bottom of the hill to finish off any animals that did not die in the initial plunge. 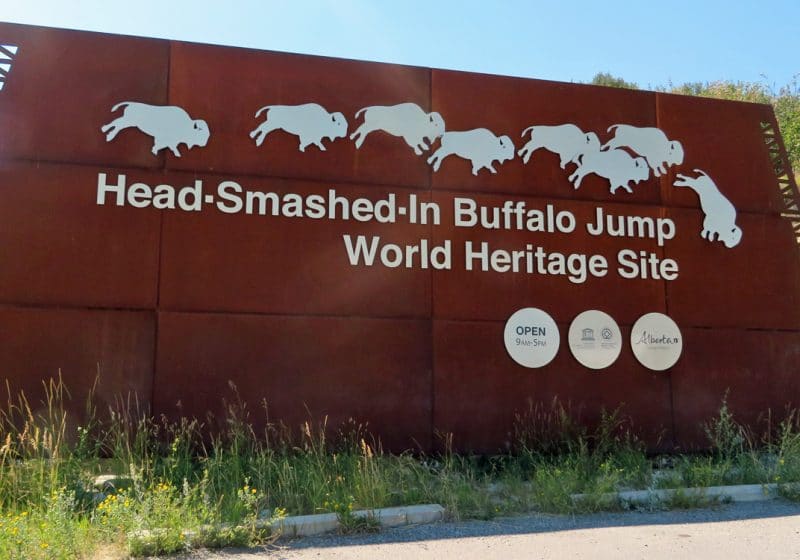 Here’s what I find most amazing about Head-Smashed-In Buffalo Jump. This site was still being used as recently as the late 1800s! Major League Baseball games were being played in America at roughly the same time that native people were still chasing buffalo off this hill. That’s amazing to think about.

The Art of the Buffalo Jump

Buffalo jumps were an extraordinarily complex and difficult to pull off. It wasn’t just a matter of chasing a few animals. Buffalo have an excellent sense of smell but poor vision, so pulling off a successful drive required perfect wind, weather, and timing. 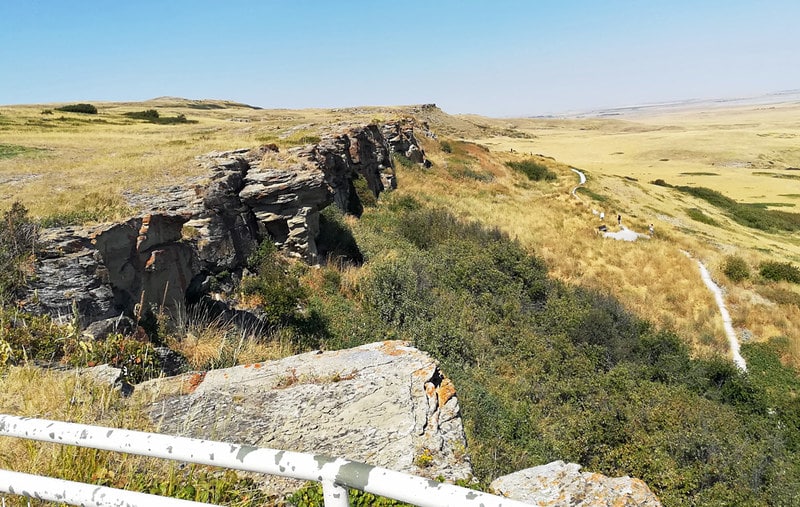 The drive started two miles away from the kill site. The hunters would first establish “drive lanes” by creating artificial boundaries of rocks or trees on either side of the field. The buffalo viewed these boundaries as solid walls and would not try to go through them.

Then “buffalo runners” would wear the hide of a buffalo and direct the group of animals deeper into the lanes toward the hill. Once the lead animals began running, the other would follow in a stampede. Additional hunters would be stationed along the side boundaries to scream and yell, in order to keep the buffalo in their frightened and alarmed state. 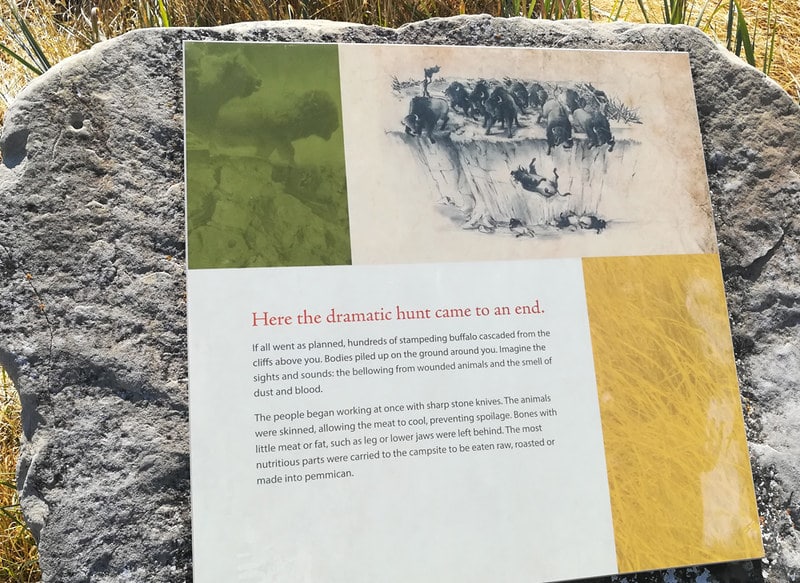 The drive lanes got more narrow as they approached the cliff, which had the effect of funneling the pack of buffalo into the same small piece of land. Just before reaching the kill spot, the buffalo runners who were running with the pack would scoot out through the side boundary, while all the animals behind them would continue running forward over the hill.

Attempts did not take place every year. The conditions had to be just right. The drive lanes had to be just the right size. The wind had to be blowing toward the cliff so the animals would not smell the humans gathered in that spot. Drives were often held in the fall when the animals were healthy and fat. Multiple tribes in the area might join together to pull them off.

Not every attempt was successful. But when they were, the hunters suddenly found themselves with thousands of pounds of meat for food, clothing, and shelter. The bones were used to make tools. Very little of the animals was wasted. 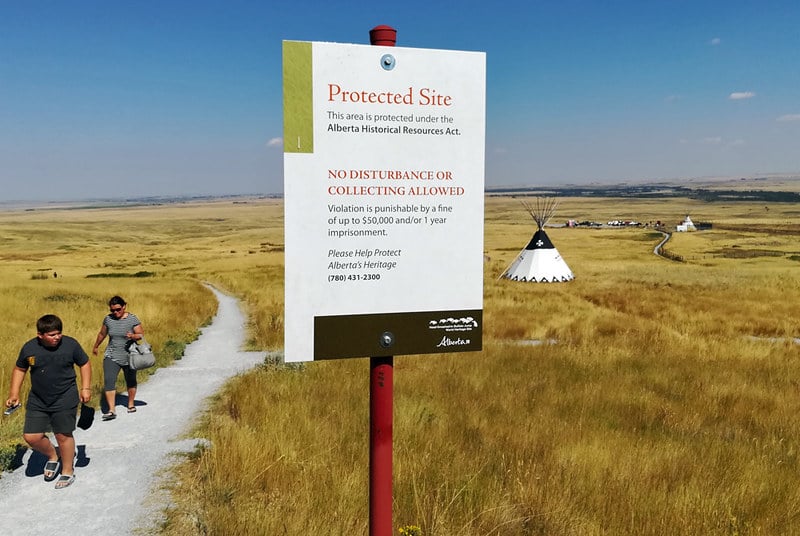 Learning about the buffalo jumps was fascinating, and Head-Smashed-In (named after a legend about a boy who tried to watch the buffalo jump at the bottom of the hill but got crushed) does a great job of telling the story with videos and exhibits in its indoor five-level museum section. 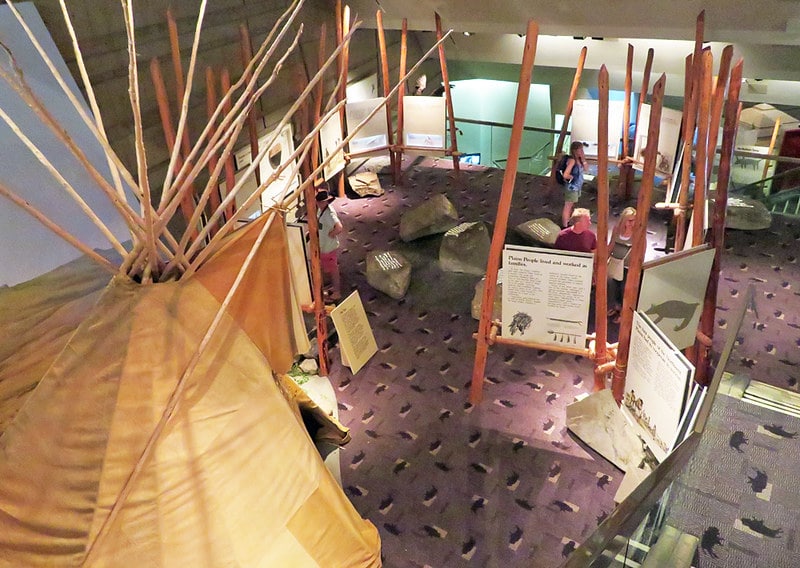 Standing in the actual, physical location where all this happened is an overwhelming feeling. You can sit on a bench right at the kill site. Talk about being right where the action happened! 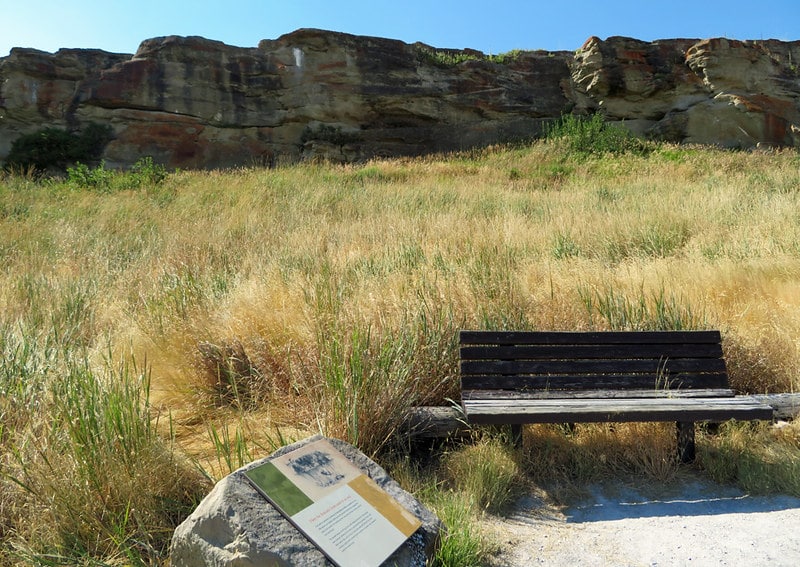 The interpretive center includes a display of some of the ways that the buffalo parts were used. Buffalo horns could be used as a canister to transport hot coals (item #8), or used as drinking cups (item #9). Bones were sharpened into awls for sewing (item #11), and bladder bags were used to store and preserve fat (item #13). 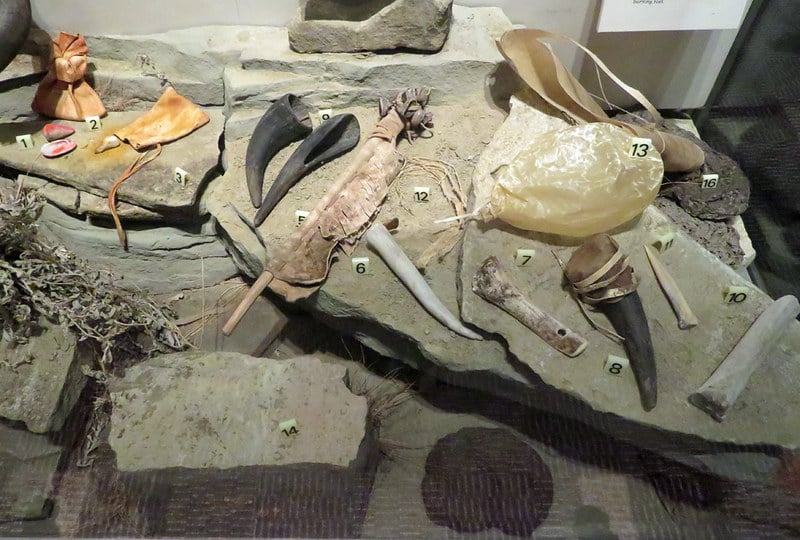 Archaeologists have studied the soil and uncovered several different layers of bones and weapons that provide a record of various eras during which the site was used for hunting. 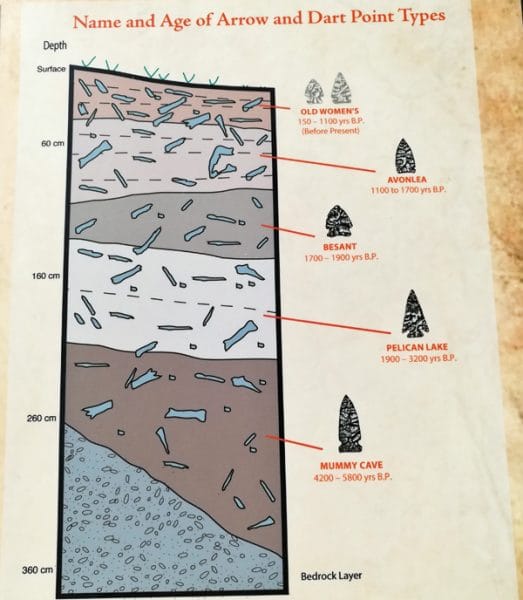 The trails at Head-Smashed-In aren’t very long, so anyone in decent shape should walk the paths to get a sense of what the Canadian plains are like. 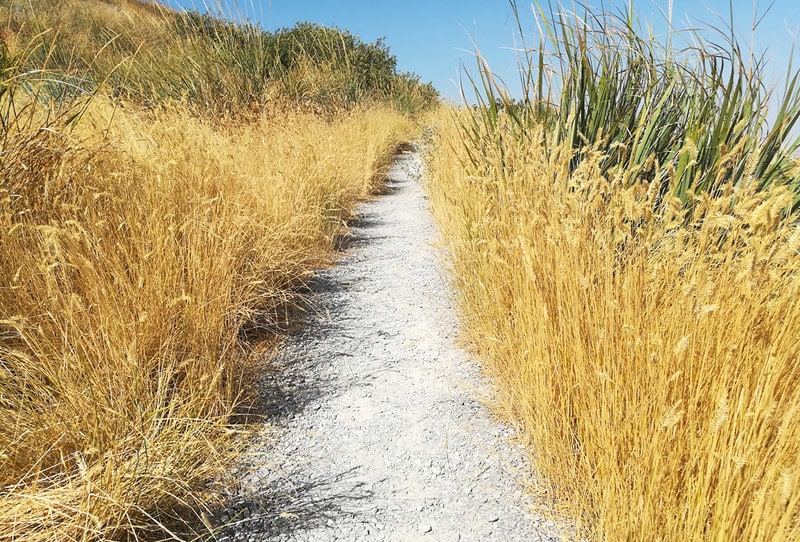