You might not expect to find much archaeological history in a place like the Big Island in Hawaii, where lava flows tend to bury everything in their path. But Hawaii Volcanoes National Park is home to one of the island’s coolest treasures – a collection of Hawaiian petroglyphs!

These intricate carvings into the lava bedrock provide a window into the lives and culture of the natives who lived here between 1200 and 1450 AD. The images depict people, animals, and symbols that were important to the natives, who viewed this area as sacred. 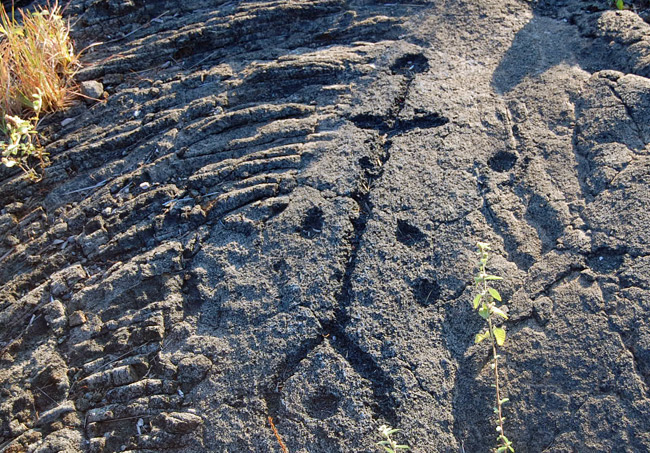 These are known as the Pu’u Loa petroglyphs, and they are impressive to see up close.

Hawaiian petroglyphs can be found in various places, but the Puu Loa petroglyphs, which include roughly 23,000 lava etchings, make up the largest collection in the state.

These petroglyphs are located along Chain of Craters Road, not far from the end of the road near the ocean. Many of these are easily viewable by anyone willing to take the three-quarters of a mile hike. If you’re trying to see petroglyphs on the Big Island in Hawaii, this is an easy place to do it! 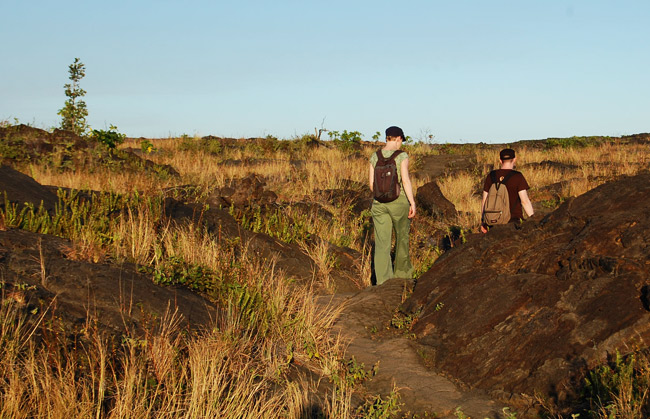 Pu’uloa means “large hill.” While the ground itself is relatively flat, there are hilly and rocky sections due to the way to lava hardened. It’s worth making the trip here to see these markings, especially after you’ve learned the stories behind them, including an unusual ritual involving umbilical cords.

Hawaiian Petroglyphs: The Pu’u Loa Hike on the Big Island

This is what the start of the Puu Loa petroglyph hike looks like. You’ll see a landscape of rocks with a bit of shrubbery and some blotches of green plant life, along with a line of hikers heading to the petroglyphs.

These signs are spotted around the park as a precaution, though during our visit there were no fumes to speak of on this hike. 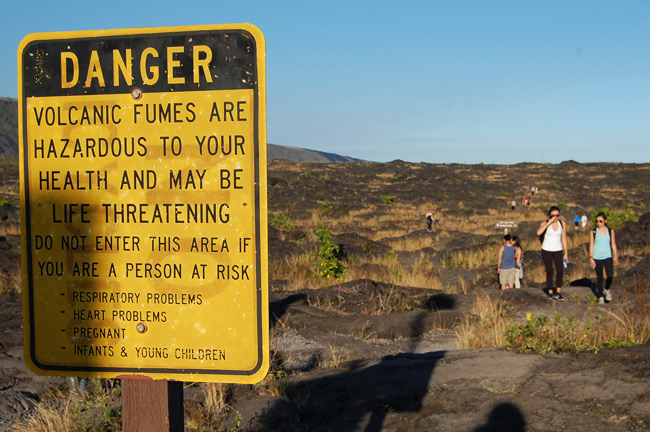 NPS markers explain how Hawaiians were able to survive on this harsh terrain, which is not conducive to farming, and they give tourists information about the significance of the symbols. 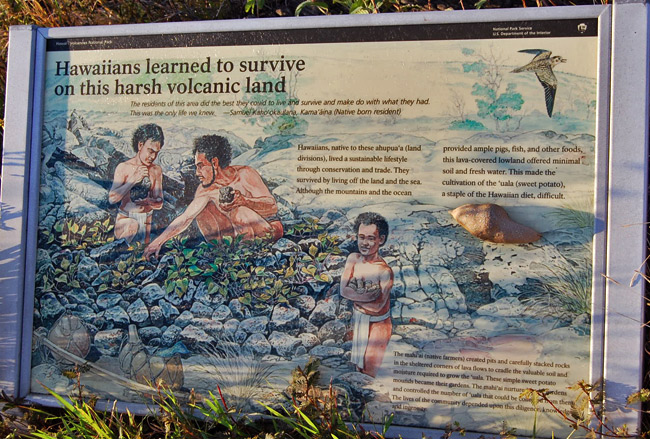 The lava here is pahoehoe, one of two types of lava in Hawaii. Pahoehoe means “smooth, unbroken lava,” and it often has a rope-like surface appearance. 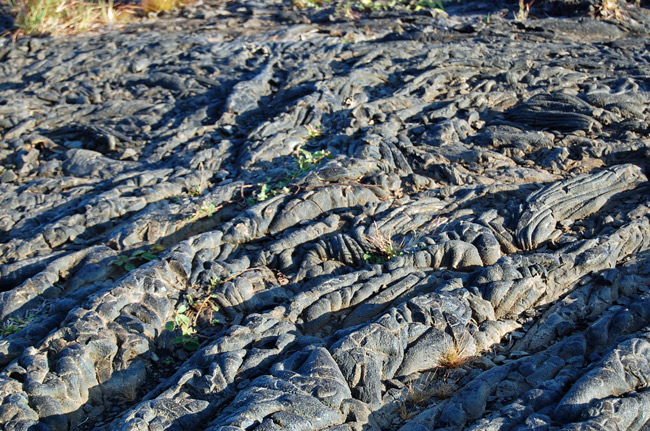 It amazes me that anything can grow out of hardened lava, but somehow plants like this noni fruit find a way. Unexpected little sights like this made the hike to the Hawaiian petroglyphs even more fun. 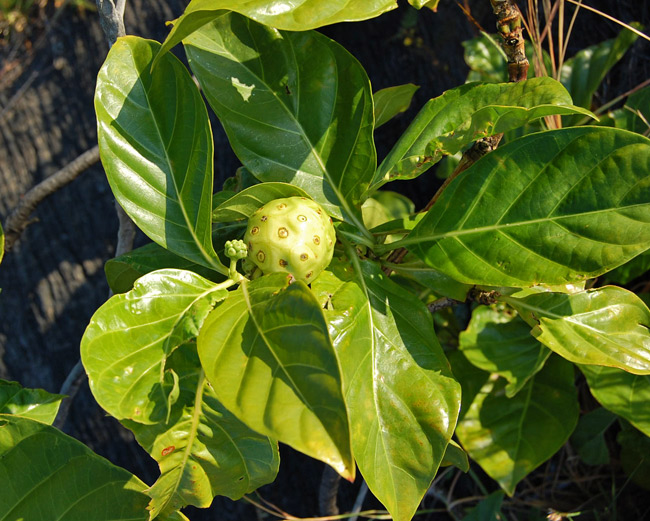 Keep walking, and before long, you’ll reach the boardwalk at the end of the hike. The boardwalk was built in an area of very heavy petroglyph activity. You can walk around it and see hundreds of carvings in the lava below. 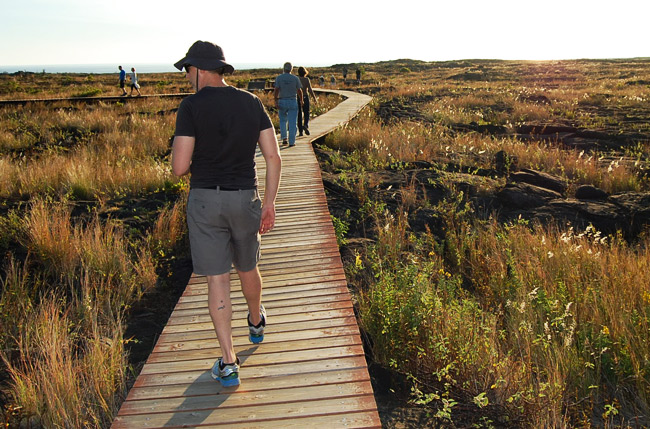 Examining the Petroglyphs: What Do the Symbols Mean?

Here’s where that umbilical cord story comes in. Natives used to come here to bury the umbilical cords of their newborns. The cord (“piko”) would be placed in a small hole (“puka”) underneath a rock. This was done to build a connection with the ancestral land and to ensure a long and prosperous life.

Approximately 16,000 of the 23,000 petroglyphs here are pukas. Those are the small round holes you will see everywhere. 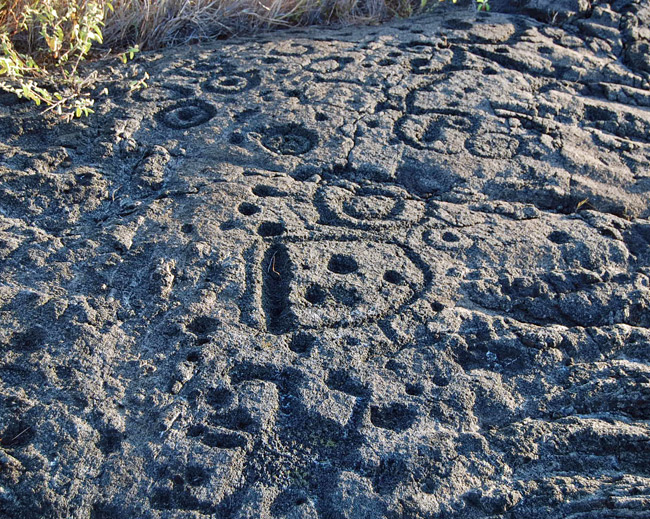 Some of the holes are surrounded by one or more rings. As the NPS notes, people have interpreted these symbols in different ways.

Early explorers were told that the rings denoted the number of people who had traveled completely around the island. However, later anthropologists said that a hole inside a ring represented a family’s first-born child. 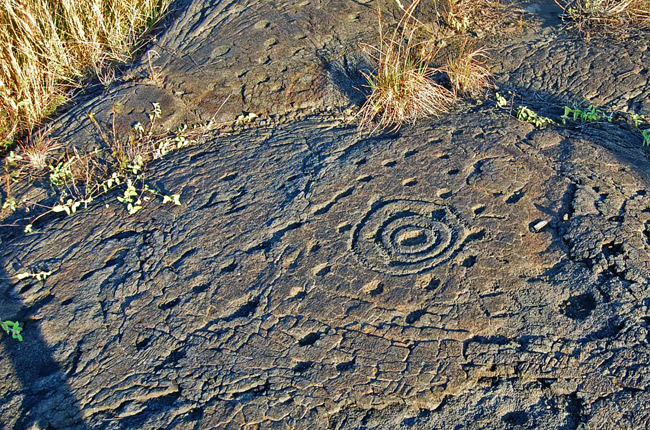 This next series of etchings is interesting. There are a few symbols that look like people. Note the clear drawing of a turtle in the lower left next to the semicircle with the dot in it. 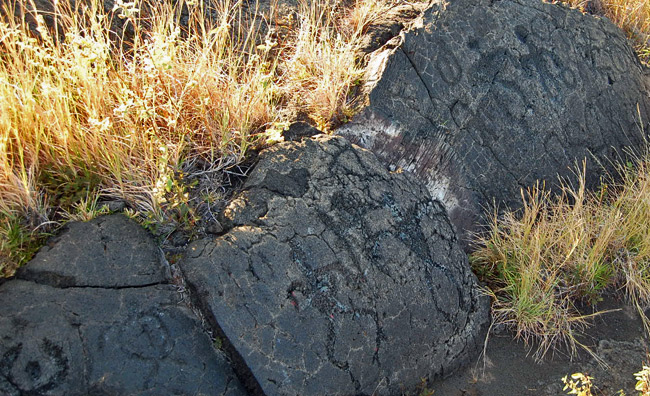 Instant Hawaii has some descriptions of what some of the other symbols might mean. 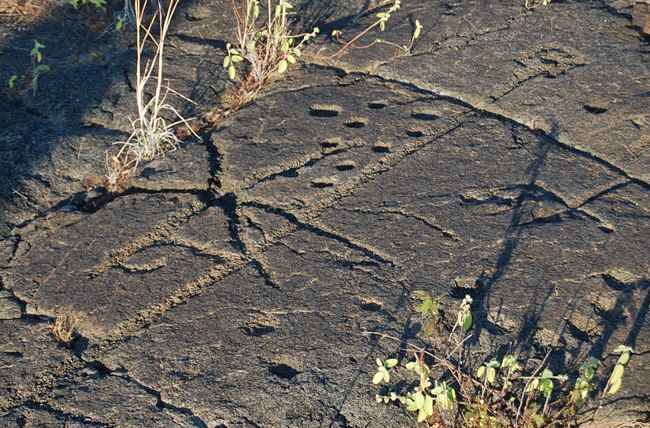 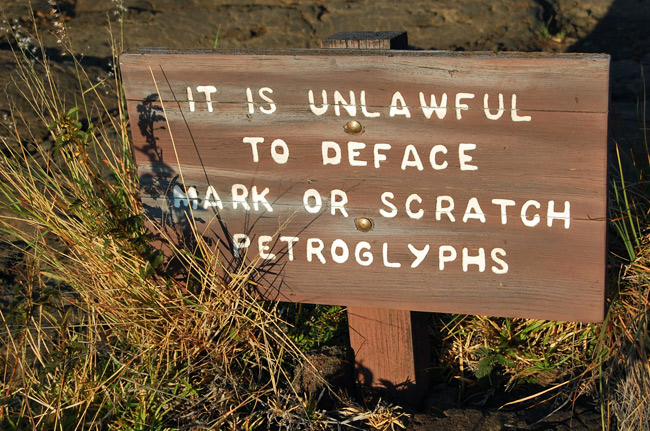 Many more petroglyphs can be found if you leave the boardwalk and go off onto the lava field, but visitors are urged not to do this. Anyone who visits must be respectful of the markings and avoid stepping on them or otherwise altering them in any way.

If you want to explore as many petroglyphs as possible, bring a camera with a zoom lens so you can film them from a distance without leaving the boardwalk and damaging the lava field.

The hike to the boardwalk is a fairly easy walk with no elevation changes. However, expect bumpy terrain full of hardened lava and rocks, so wear closed-toe shoes and watch your footing. Flip flops are definitely not appropriate attire.

Take your time! There’s no sense rolling an ankle because you tried to move too quickly. The full hike is about 0.7 miles each way (1.4 miles roundtrip), so that’s at least a 30-minute walk. 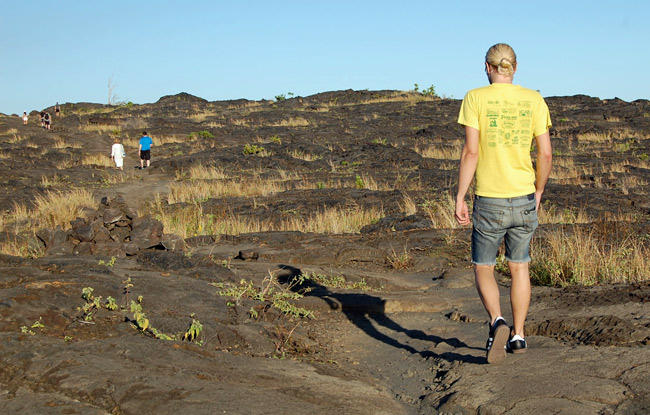 Temperatures in Hawaii almost never exceed 90 degrees, but if you’re hiking in the middle of a sunny summer day, you can definitely become overheated.

If you are not the most physically fit person, walk during the morning or early evening, rather than mid-afternoon when the sun is at its hottest. You should bring a water bottle as well.

There’s no chance of getting lost if you stay on the trail. The hike sees a nice amount of tourists – enough that somebody is always within shouting distance if needed, but not so many that you can’t enjoy the hike.

Other Locations of Big Island Petroglyphs

If you’re staying in Kona and don’t want to drive that far to see Hawaiian petroglyphs, you can check out Waikoloa Petroglyph Reserve and Puako Petroglyph Park instead. Both are located about a 35-minute drive north of Kona on the west side of the Big Island.

And while you’re on the island, stop by Ka Lae, the southernmost point in the USA. Visit the Pacific Tsunami Museum in Hilo. And if you’ve got the cash, consider taking a helicopter ride over a volcano with active lava flows!

Would you make this hike to see the Hawaiian petroglyphs?