Walking through the lonely corridors of Fort Jefferson, with sweat dripping from every limb on a scorching hot day, I quickly realize why the prisoners who were held here in the Civil War era considered it hell.

Fort Jefferson may be located on a scenic tropical island in what is now Dry Tortugas National Park, but inside this fort, there’s no sense of the beautiful Gulf of Mexico waters that lie just beyond the 50-foot-high, 8-foot-thick walls. 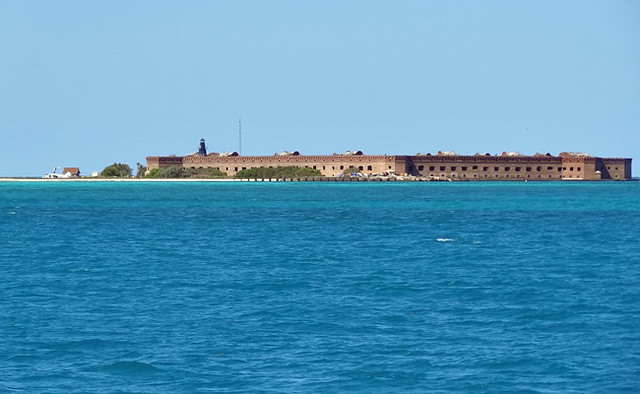 The only windows to the outside are the small openings where cannons used to sit, ready for battle. More than 800 prisoners stayed here, including four convicted in the plot to assassinate Abraham Lincoln.

One of them, Dr. Samuel Mudd, would end up playing a major role in solving the yellow fever epidemic while working as the fort’s doctor.

Generally, you don’t expect to find such a rich history on an isolated tropical island, but Fort Jefferson holds many surprises.

Viewing Fort Jefferson From the Outside

Whether you fly or boat into Dry Tortugas National Park, you’ll spot Fort Jefferson on Garden Key from miles away.

You can see the big rows of cannon holes halfway up the fort, and you can see smaller cannon holes near the top and bottom. The top row of “holes” is actually fake – they’re just small indentations designed to look like cannon holes. It’s all about intimidation and fooling potential enemies! 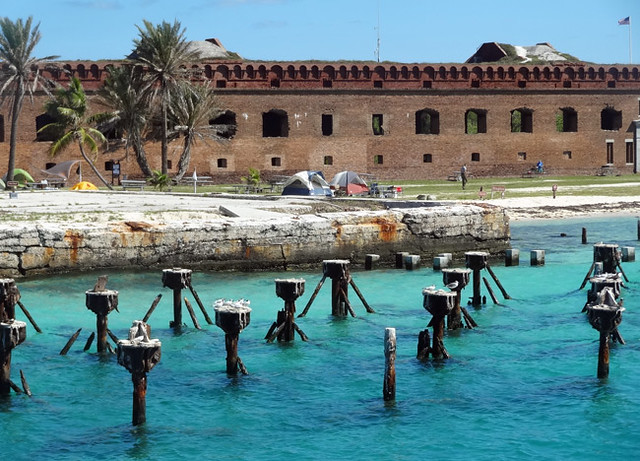 These days, some of the cannon holes serve as balconies for NPS members who reside in the fort. Cool! 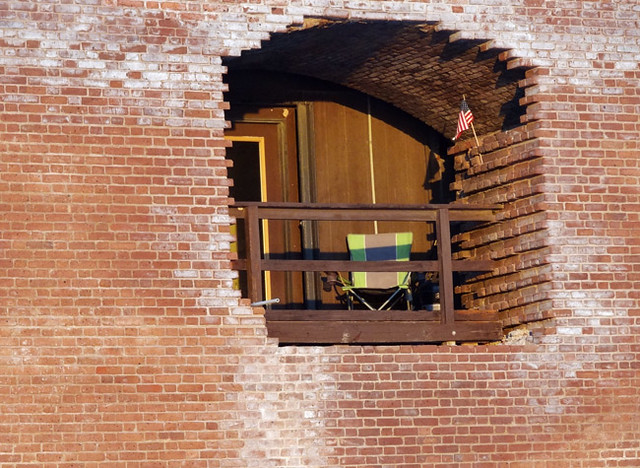 When and Why Was Fort Jefferson Built?

Dry Tortugas was discovered by good old Ponce de Leon himself in 1513. The United States bought Florida from Spain in 1819.

The fort was built as a military outpost to protect American shipping lanes in the Caribbean. The U.S. government began talking about building such a fort in the 1820s, not long after buying Florida. Construction finally began in 1846.

The initial purpose of Fort Jefferson was to combat piracy. These days, when we talk about “piracy,” we’re mostly referring to online piracy, as in illegal copying of copyrighted material. But this fort was built to combat actual piracy. As in pirates! Real pirates of the Caribbean! Thieves in boats who pillage and steal!

Fun fact: You may notice that the top section of bricks on the fort is darker than the rest. That’s because the fort was constructed mostly from Florida bricks, but once the Civil War began, Florida was part of the Confederacy and refused to supply bricks, so the Union forces that controlled the fort shipped in darker bricks all the way from Maine. 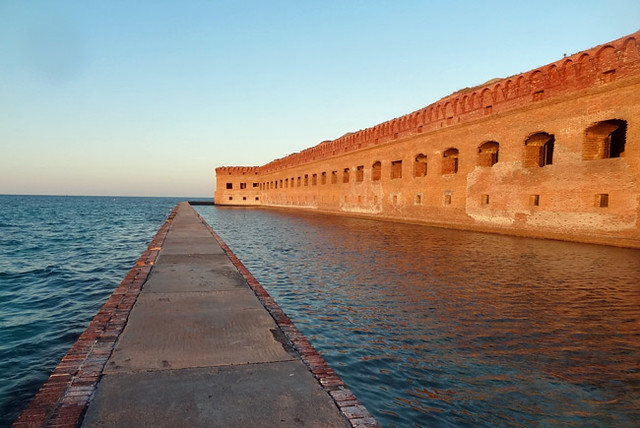 There’s a moat around Fort Jefferson. Moats are something you usually read about in ancient stories about castles, so it’s like a journey back in time to see the moat.

Moats in fictional stories usually have a bunch of alligators in them. Well, this one does too! Kind of. There’s a single American crocodile at Dry Tortugas. It arrived here on its own many years ago, mostly likely from the Everglades area.

It often hangs out in the moat, though it sometimes leaves to swim to other islands in the park. There are warning signs everywhere advising tourists to watch for the croc, but it has never had an encounter with a human. 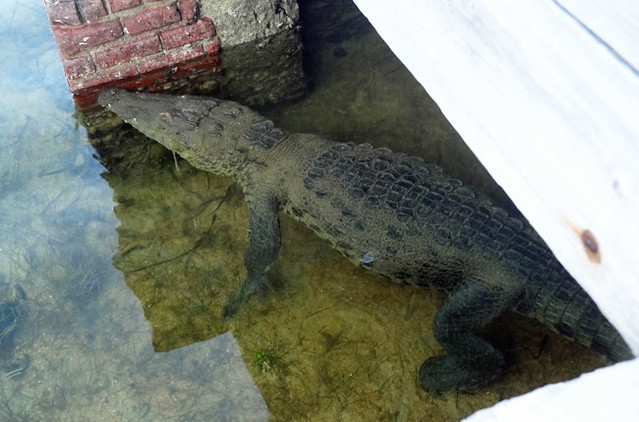 Update: Shortly after my Fort Jefferson visit, the croc was removed by officials and relocated to the Everglades over concerns about tourist safety.

Going Inside to Learn About Fort Jefferson History

You can explore the fort on your own, or take the daily one-hour guided tour. The tour is worth it for all the interesting tidbits of Fort Jefferson history the guide provides.

Fort Jefferson encompasses 10 acres of the 16-acre island. When you enter the fort, you’ll see a courtyard area in the middle with a few trees and old buildings and ruins. There are two main levels of the fort, as well as a roof, and you can access all of these areas via staircase. 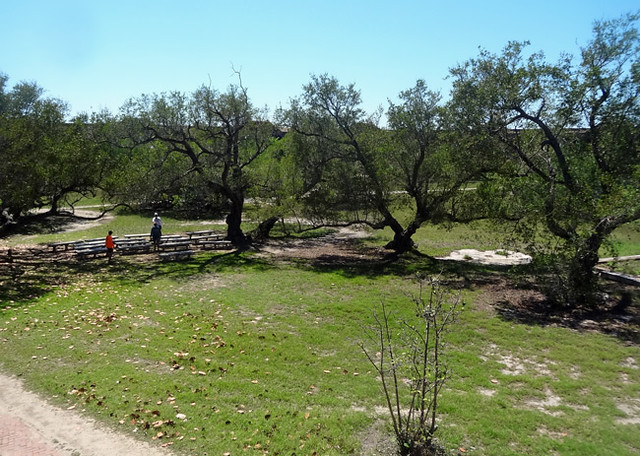 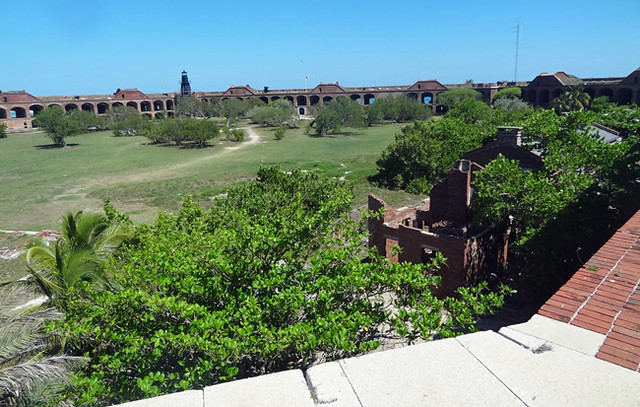 On the tour, you’ll learn about the history of the fort, how it became a prison, how rainwater was collected, details about the barracks where soldiers used to live, and how the fort was eventually turned into a national park.

You’ll learn about the fort’s recent history, such as the occasional boats of Cuban refugees that land here seeking sanctuary. The way it works is that if they’re caught while at sea, they can be returned to Cuba, but once they reach American soil (Dry Tortugas is indeed American soil), they are given refuge. 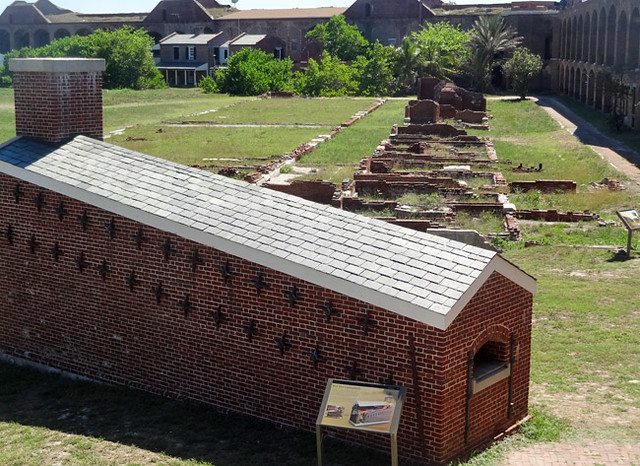 Rainwater collection was important. They couldn’t drink the salt water, after all. Initially, an elaborate cistern system was set up to collect and distribute rainwater. But ultimately, it didn’t rain often enough for this solution to be workable.

During the Civil War, steam-powered plants were brought here to convert the salt water into fresh water. That proved to be a better option for creating drinkable water.

One of the coolest visual highlights as you walk around the fort is seeing the long corridors on the first floor. These long hallways with the arches make for great Instagram photos. 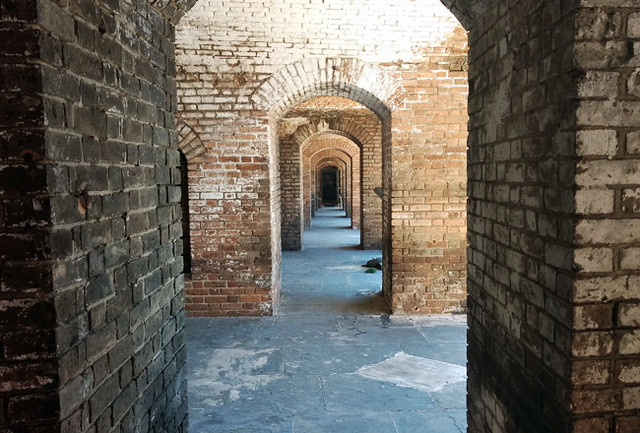 Here’s another piece of Fort Jefferson history trivia: Because it’s so far from the mainland, the builders knew it would have to withstand attacks on its own, without any reinforcements. So they designed the fort to hold enough soldiers, artillery, and food to survive an entire year-long siege. That’s why it is so big and sturdy.

As it was built during the era of slavery, slaves from Key West comprised about 20% of the workforce during construction. Irish immigrants from northern states provided a large chunk of the paid workers.

You can look out through the old cannon holes. It’s interesting that despite all the time and effort that went into constructing the fort, not a single shot was ever fired here. 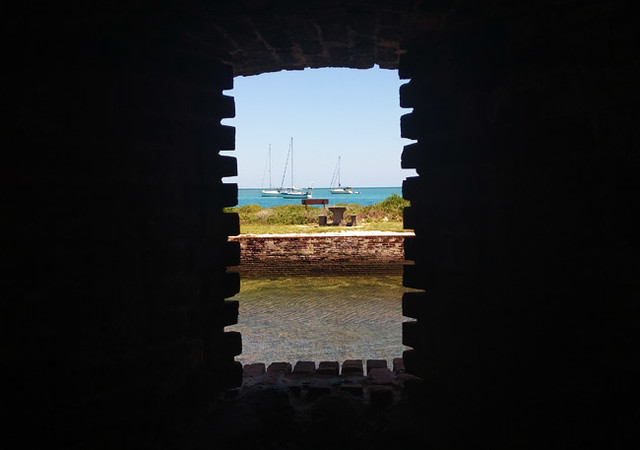 Be sure to go to the roof for the most amazing park views. Just be careful – there are no fences or handrails so you could easily walk right off the edge if you’re not paying attention. 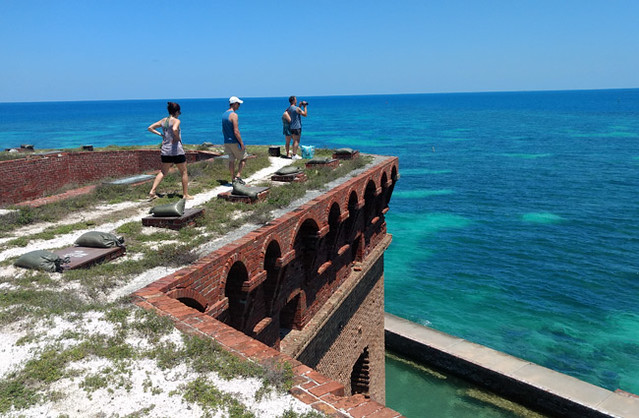 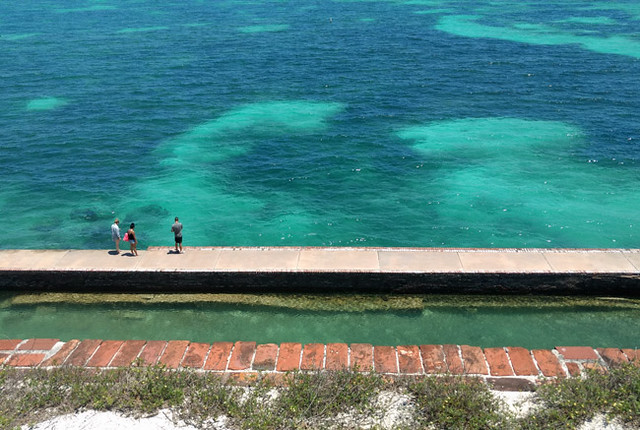 Fort Jefferson never saw military action, but it came close during the Civil War. According to the NPS, shortly after Florida seceded from the Union to become part of the Confederacy in January 1861, a ship from the state of Florida arrived at Fort Jefferson and demanded that Union soldiers surrender the fort.

At that time, the small Union troop at the fort had no artillery of any kind (cannons and weapons wouldn’t begin arriving until the following week). But Major Lewis Arnold bluffed. He told the ship to leave immediately, or it would be destroyed. The ship backed down and left.

By 1866, there were 175 cannons at the fort. The ones that remain are enormous. Feel free to play around with them and take as many silly pictures as you want! 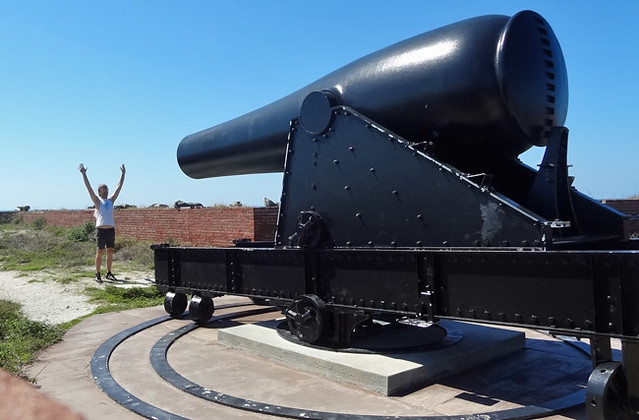 I love the fact that a cactus was growing 45 feet in the air on the roof. Surrounded by so much water, yet still hot and dry. 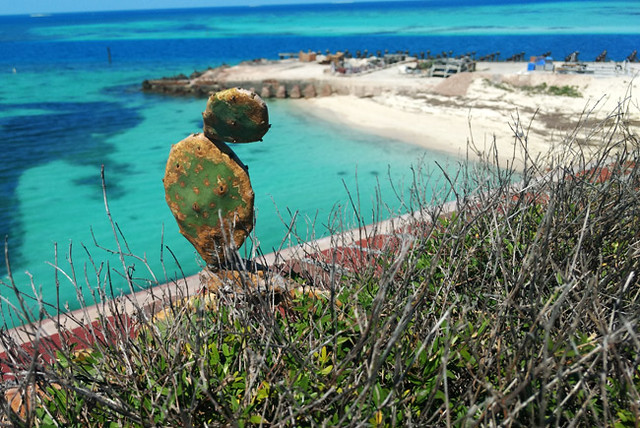 You can see many of the nearby islands from up here and you get a great view of the snorkelers on the island.

I saw some pretty big fish while snorkeling. One guy told me that while he was up here, he saw a small shark (4 feet or so) swimming on the north side of the fort just outside the moat. Keep your eyes open!

The fort officially closes at sunset, but a lot of people stay up here on the roof until then to view the unobstructed sunsets in the Gulf of Mexico. 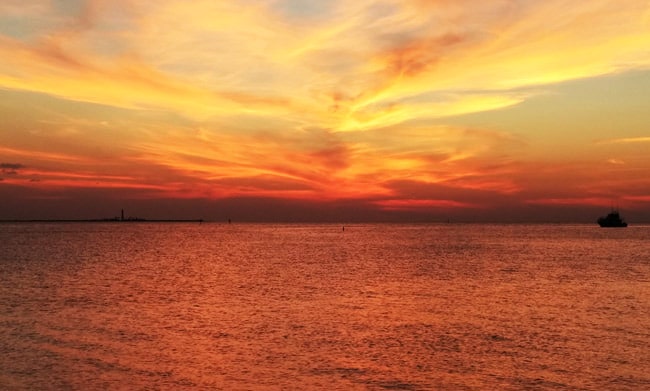 What Was Fort Jefferson Used For?

Though it was initially built to protect American shipping interests, Fort Jefferson was later converted into a prison. Talk about a maximum-security facility! Anyone who escaped would have to swim dozens of miles to get back to the mainland.

The prison was established to house Union soldiers in the Civil War. Dr. Samuel Mudd was one of several people implicated in the assassination of President Lincoln. After avoiding the death penalty by only one vote, Mudd was sentenced to hard labor at Fort Jefferson.

His cell was on the second level just above the fort entrance, and it’s open to visitors. There was plenty of other Mudd memorabilia available. Like this drawing that he made of the fort. 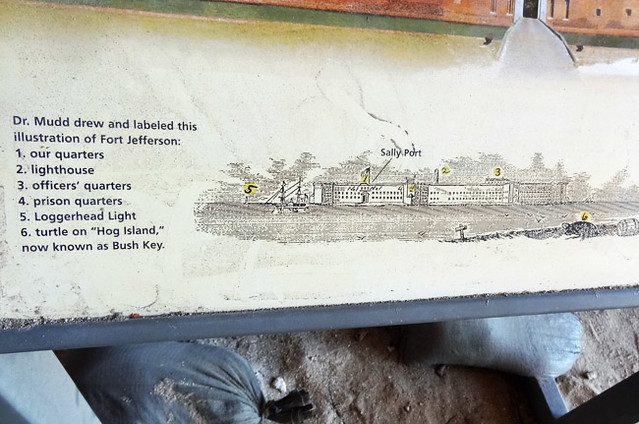 Why is Mudd so notable? Well, in 1867 an outbreak of yellow fever began killing many inmates, as well as the fort’s doctor. Nobody knew how it was spread. Because of his background, Mudd agreed to take over as doctor.

He was instrumental in uncovering the realization that the disease was spread by mosquitoes, and he ending up saving a lot of people at the fort. For his work, he was pardoned and released by President Johnson in 1869. 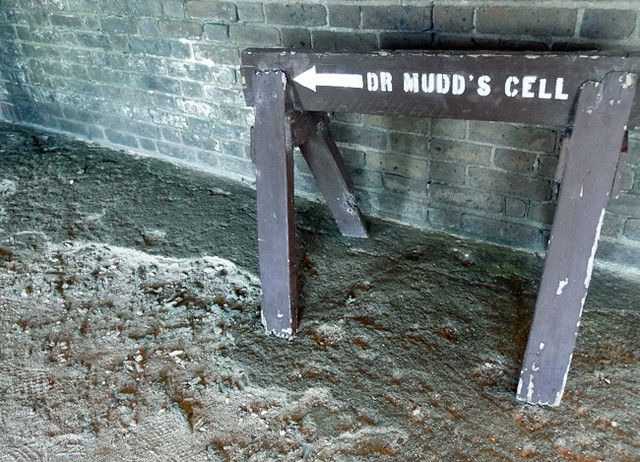 For more info, check out the Smithsonian’s fascinating article “How Samuel Mudd Went From Lincoln Conspirator to Medical Savior.”

Getting to Fort Jefferson

To get to Fort Jefferson, arrive in Key West and take the Yankee Freedom ferry over to the island. Either stay for a 4-hour day tour, or bring a tent and camp overnight (reservations must be made far in advance.)

Even if you’re just here to take in some rays and see some barracuda through your snorkel, set aside an hour to explore the fort and you’ll get a much better sense of appreciation for this place.

Isn’t Fort Jefferson history fascinating? Soak it up if you ever visit Dry Tortugas!