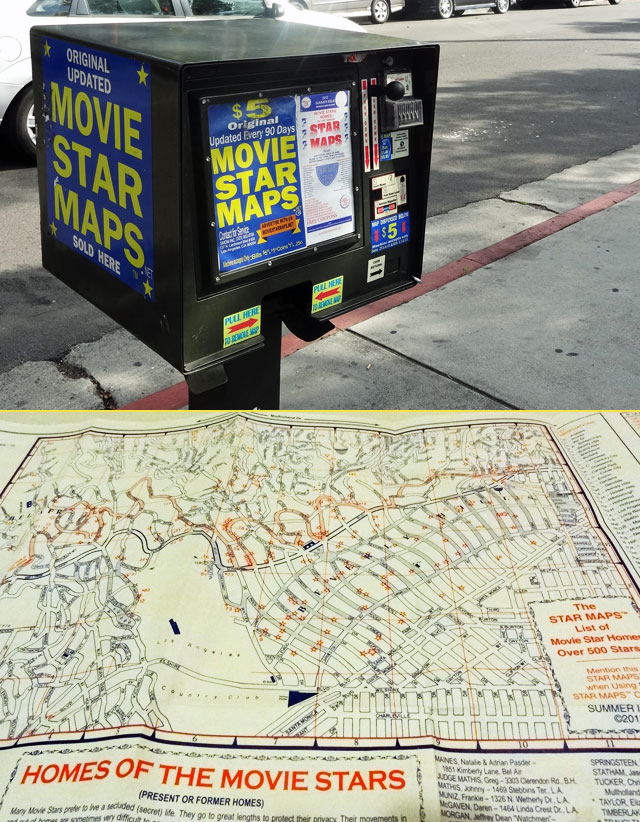 I am the world’s worst celebrity stalker.

Whenever I visit L.A., I get excited about the possibility of seeing famous people. Hollywood is all about glitz and glamour. Friends who live in L.A. are constantly making me jealous with stories of bumping into Cher or Tobey Maguire or David Hasselhoff (The Hoff!) in random places like the drug store and supermarket.

I get my hopes up every time I visit Tinseltown, and then I’m inevitably disappointed. Here’s the problem: Even though I know where to see celebrities in Los Angeles, I don’t watch a lot of movies or television. So I’m just not familiar with very many famous people. If you stood 10 current movie or tv stars in front of me, I’d be lucky to name two of them.

So I’m probably bumping into famous people in Los Angeles all the time without recognizing them.

For instance, the last time I hiked Runyon Canyon, I saw this woman wearing a big floppy hat and giant sunglasses, a common tactic employed by famous females trying not to be recognized. She has movie star lips. She must be famous, right?

I got my hopes up that she might be Angelina Jolie, but that can’t be right. Or can it? I’m still clueless on this one.

I’m just no good at this wannabe-paparazzo thing. But I’m going to attempt to pass along my limited wisdom on the topic anyway. If you’re visiting without a car, celeb-hunting will be a little more difficult, but it’s still easy enough to get around by Uber or bus.

And scroll to the end for a 2020 update with some of the latest and greatest places to see celebrities in Los Angeles that have emerged since this article was first published!

Where to see celebrities in Los Angeles: Try Runyon Canyon and Beverly Hills

I know all the basic tips for seeing celebrities, such as: Go out during weekday mornings, since celebs tend to keep a lower profile during busy weekends; keep your eyes open at LAX and stare down everyone since famous people are all over the place there; look for people wearing big hats and sunglasses in an obvious attempt to be conceal their identity; and hang around certain hotspots that celebs visit.

What are those common celeb hotspots? Among them are Kitson and the Ivy in Beverly Hills; any of the hiking trails in the Hollywood Hills, especially Runyon Canyon; and normal-people places in West Hollywood like Whole Foods and Target.

What’s the best time to see celebrities at Runyon Canyon? Weekday mornings are your best bet. Here’s an analogy that’s slightly uncomfortable, but accurate: Think of celebs like wild animals. They want to avoid people as much as possible to keep their privacy. So they’re more likely to emerge on weekdays when the rest of the world is working, and on early mornings before the trails get too crowded with other hikers and dog walkers.

The biggest rule when it comes to seeing celebrities in Los Angeles is to be alert and look closely at everyone who passes. Those of us who live in urban settings are used to walking past strangers without looking at them, and that’s a habit that must be broken to spot Hollywood royalty on the street!

Here’s where I attempt to impress you with this underwhelming rundown of the various B- and C-list stars I’ve bumped into during my visits to the City of Angels. Prepare yourself for some hilariously bad blurry pics!

First up is Hal Sparks, best known for his work on VH1’s I Love the 80s series and Queer as Folk. He’s a liberal political commentator and standup comedian now. A few years ago I saw him outside a Beverly Hills hotel taking pictures of people protesting an appearance there by President Obama.

I managed to sneak a photo of Sparks as he was sneaking photos of other people: 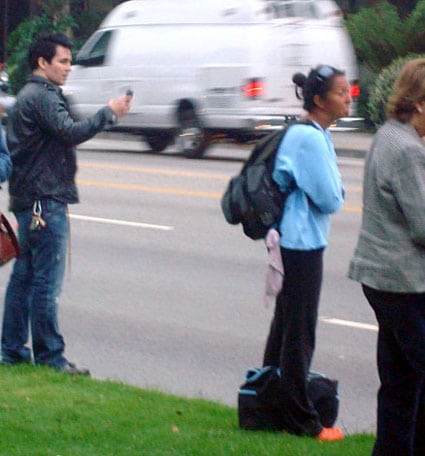 The night after I attended a taping of Last Call With Carson Daly featuring Green Day as the musical guest, I saw Green Day bassist Mike Dirnt walking down Santa Monica Blvd. in West Hollywood with his wife and child. It was cool but kind of ho-hum since I had just seen Dirnt the previous night during the show taping.

The other famous person I ran into during that visit was Magic Johnson, the legendary NBA star, during a Newsroom Café lunch. He remains the biggest star I’ve seen in L.A., and I only noticed him because my dining companion pointed him out (thanks, Melanie!) Newsroom Cafe is now closed; these days, try The Ivy instead.

During my most recent L.A. visit, I saw three semi-famous folks. The most well-known of the group was Patton Oswalt, which was exciting since he’s one of the smartest and funniest comedians around today. He was jogging around the Silver Lake Reservoir. I proceeded to sneak a ridiculous photo of him from behind after he passed. Go Patton! 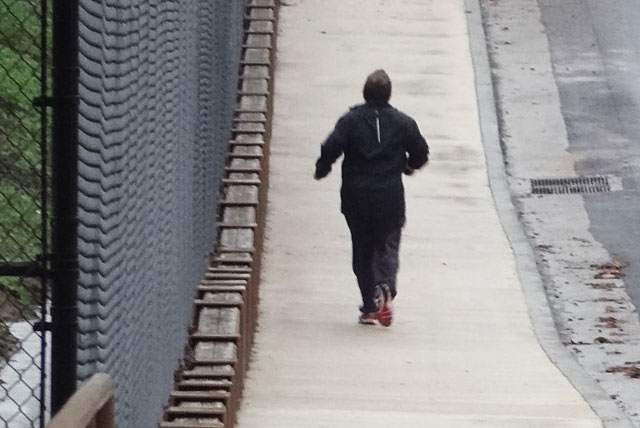 The other two barely even qualify as celebrities since they’re both from reality shows. While walking in Silver Lake, I spotted Tabatha Coffey of Tabatha Takes Over sitting in the window of a Thai restaurant. And while strolling through Hollywood, I chanced upon Reza Farahan from Shahs of Sunset walking with a friend.

I tried to snap a pic of Reza and only got a portion of his head (he’s the one on the left.) You can’t even see his signature moustache because he’s facing the other direction. Paparazzi fail. 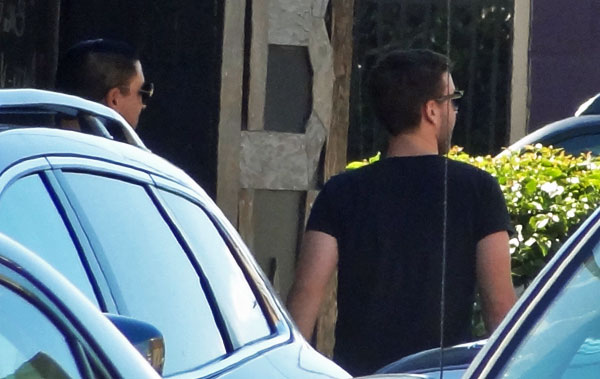 Four trips to Los Angeles, and that’s all I had to show for it in terms of celebrity encounters.

In recent years, I’ve seen a few more B-list and C-list celebs around LA, including Jimmie Walker at the airport. I’m still waiting for a true A-list celebrity sighting though, someone like Beyonce or Tom Hanks or Adele or Paul Rudd.

How to find celebrity houses in Los Angeles

Since it’s hard to spot celebs on the street, sometimes a better option is to drive by their houses. You can easily find out where your favorite movie star lives. Disclaimer: This is for informational purposes only. If you try to actually stalk someone or sneak into their house to pull off a Bling Ring-style heist, I shan’t be held accountable.

One simple option is to buy a star map, which can be found in little sidewalk bins around the city for $5. The documents have an extensive list of celeb houses, but they aren’t the most user-friendly maps in the world and their lists are tricky to interpret.

If you prefer to research before arriving in L.A., you’re better off using the site virtualglobetrotting.com. Just type in the celeb you’re curious about, and you’ll see an aerial view of his or her house. That site doesn’t display the physical address of the dwelling, but it does display the latitude and longitude. Plug that info right into Google Maps, and you can discover the street address.

When I have the time, I sometimes drive past famous person houses. Here’s Kathy Griffin’s place in the Hollywood Hills (Update: She has since moved into a new house): 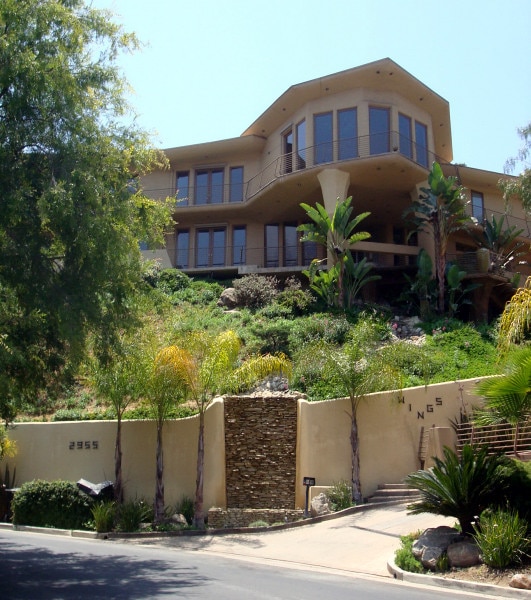 After Michael Jackson passed away, I felt compelled to see his former residence. I showed up with my friend Jason but it was late at night, so there was very little to see. We saw the back gate, pulled a U-turn in his driveway, and headed back home. This is what I left with in terms of photographic evidence: 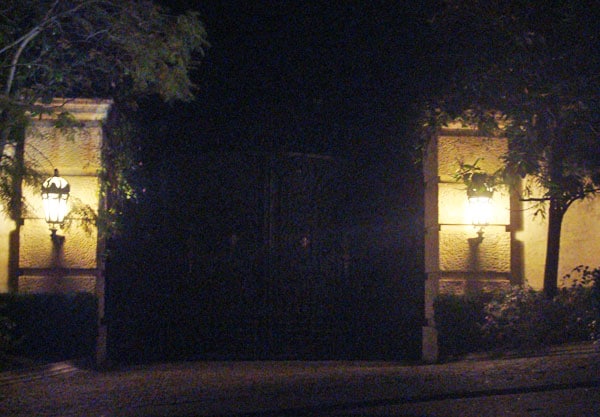 Obviously, there wasn’t much to see at the King of Pop’s old estate. You’d be better off visiting his birth home in Gary, Indiana instead.

And finally, I tried Jack Nicholson’s house, but as you might expect for such a megastar, his residence was hidden from the road. I had to settle for a shot of his garbage and recycling bins. 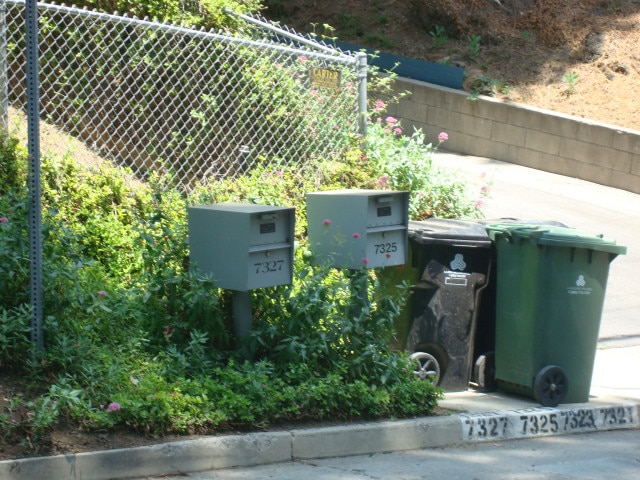 I could’ve gone  through Jack’s garbage, since in California it is legal to go through someone’s trash once it has been put on the street. But I wouldn’t go to that extreme. I guess I’m not a stalker after all.

Plus, I already got an up-close selfie with Jack at the Madame Tussauds Wax Museum. Jack and I are already best buds.

LAX (Los Angeles International Airport) and famous hotels like the Chateau Marmont are other places where you can catch glimpses of the rich and famous.

Also, keep your eyes open as you wander around Los Feliz, one of my favorite LA neighborhoods!) Los Feliz is replacing Silver Lake is the cool epicenter of the city. Pop in to all the boutiques and coffee shops to scope out the clientele.

Good luck getting your paparazzi on!

Do you know where to see celebrities in Los Angeles or Runyon Canyon? Share your own tips!

8 thoughts on “Where to See Celebrities in Los Angeles: Runyon Canyon, Hollywood Hills, and More”