“Visiting Los Angeles without a car is impossible!” numerous L.A. residents had warned me. I stubbornly disagreed!

My friend and I had intended to rent a car for at least a couple of the six days we spent in Lala land, but some unexpected financial obligations at home meant that our already-booked L.A. vacation would be a budget trip. That meant no rental car – we’d rely on public transportation for the entire thing.

No problem. Budget trips are right in my wheelhouse. And you don’t need a car to get around L.A. 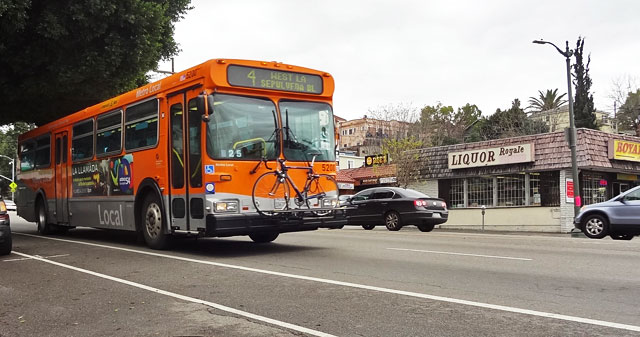 This article will explain the easiest way to get around Los Angeles without a car, mostly by using public transit and walking. We’ll also recommend some hotels that are conveniently located in the heart of the best neighborhoods in the city.

Aside: Can you just take Lyft and Uber everywhere?

The first time I visited LA, Uber and Lyft weren’t yet a thing. Today, rideshare vehicles make visiting LA without a car much easier. But… as my most recent LA trip proved, the rideshare glory days may be coming to an end.

Due to declining pay rates, fewer people are driving for these companies now. Several times on my last LA visit, I had to wait 10-15 minutes for a ride. So the bus and subway are still very much needed. Don’t assume you can take an Uber everywhere.

Getting Into the City From LAX: Flyaway Bus or Taxis

There are several shuttles you can book in advance to ride from LAX airport into various parts of the city. The easiest and cheapest option is the LAX Flyaway Bus.

The Flyaway Bus is a mere $9.75 as of this writing. You can purchase Flyaway Bus tickets online in advance, in person at the ticket booth, or onboard the bus if you have a contactless bank card.

Your ticket will not have a specific time, however. There are no reservations. Seats are still first-come, first-serve. Just bring the ticket and get in line when you arrive. Board the bus at any blue “Flyaway” column outside the LAX arrivals terminal.

The Flyaway Bus goes straight from LAX to Union Station, which is on the far north end of Downtown, near Chinatown. Expect the ride to take 30-60 minutes, depending on traffic. Buses run every 30 minutes, so your wait is never very long.

Alternately, you could take the subway into town, but that’s a bit more complicated, because while the Green Line goes near LAX airport, it does not go directly to the airport. So from LAX, you’ll have to take the Green Line Shuttle to the Green Line.

Then take the train east to the Willowbrook – Rosa Parks station, and then take the Blue Line north into downtown at the 7th Street / Metro Center station. That’s a bit more roundabout than just taking the Flyaway Bus, don’t you think?

Rideshare is of course an option too, but prices have increased greatly in recent months. You may pay well over $50 for an Uber. Traditional cabs, meanwhile, currently have a flat rate of $46.50 from LAX to Downtown.

Despite the warnings, I knew that seeing the City of Angels by bus and train was entirely doable, as long as we stayed somewhere near the #4 Santa Monica Blvd. bus line.

This awesome bus route runs through downtown, Echo Park, Silver Lake, Hollywood, West Hollywood, Culver City, Beverly Hills, and all the way to the ocean at Santa Monica. Your mileage may vary, but for me, 90% of the places worth seeing in L.A. are accessible via the #4 bus. And the rest can be reached with a quick Lyft or Uber.

We did a great deal of walking, deciding that if any destination was less than 4 miles away (that’s a one-hour walk), we’d get there by foot. The whole point of this trip was slow travel, so we had all the time in the world.

Under these circumstances, a 4-mile walk was nothing. In fact, it was a great opportunity to exercise in the beautiful southern California sun and see more of the city.

L.A. residents had warned me that the bus and subway are full of vagrants. I don’t doubt that’s the case sometimes, but I saw no evidence of that during my week.

While there were no businessmen in suits on the bus, as you’d see in New York and Chicago, there also weren’t any especially scary people, either. I mostly saw regular working-class folks and never felt unsafe or out of place.

The subways were also useful. Here’s a very basic guide to the places you can see via some major subway lines:

Red Line: Connects downtown to Hollywood. Very convenient. I use this line far more than any other.
Green Line/Blue Line: You’ll need both of these to get downtown from the airport. The Blue Line also goes down to Long Beach.
Gold Line: I don’t use this line often, but took it once to a festival in Pasadena.

See the rest of the subway lines on the current LA Metro subway map here.

Aside from one night where we found ourselves without a bus home, spending a week in Los Angeles sans vehicle wasn’t very difficult. We made it to all the best neighborhoods in LA we wanted to see and saw lots of cool street art.

From the airport, the Flyaway Bus took us downtown, home of the Grammy Museum. From there, we hopped a bus to our Airbnb host’s home in Silver Lake. The next day we caught the #4 to Hollywood for the Madame Tussauds Wax Museum, and from there an easy walk led to Runyon Canyon for some hiking and celeb-spotting.

We got off the bus in Beverly Hills (now there’s a contradiction!) and walked around the bougie shops in the area. We stopped by Marilyn Monroe’s grave at Westwood Village Cemetery.

In Santa Monica, we hit the beach and then hopped a bus for a short ride down to Venice Beach to check out that quirky community. Almost every commute was a breeze.

The only time we used a car during the week was when a friend drove us up to the Griffith Observatory one evening. But even then, we could have taken the Observatory Shuttle, which runs on Saturdays and Sundays and costs a whopping 50 cents each way.

There really is no reason why L.A. visitors can’t get around by public transit. The commutes may be time-consuming, but that would probably be true even if you have a car, right? Using public transit and rideshare, you can still see many of the hidden gems of Los Angeles.

Best Places to Stay in Los Angeles Without a Car

Where should you stay if you’re visiting Los Angeles for a few days without a car? You’ll probably want to stay in one of the neighborhoods mentioned above.

Downtown LA is emerging as a hipster hot spot. If you want to be centrally located, West Hollywood may be your best option. But it’s fairly expensive there. Silver Lake and Los Feliz are more budget-friendly.

Hollywood is perfect for those who are into celebrity culture and love busy and vibrant neighborhoods. Santa Monica is perfect if you want to be near the pier and the beach.

Here are a few good hotels in these neighborhoods to stay if you’re in LA without a vehicle:

Downtown LA: citizenM Los Angeles Downtown. Super-modern and trendy property near the Red and Purple subway lines and the Museum of Contemporary Art.

Silver Lake: Silver Lake Pool & Inn. There aren’t many hotels around Silver Lake, but this one is a gem, with a sophisticated vibe and a beautiful pool.

Hollywood: The Hollywood Roosevelt. Located right next to the Hollywood Walk of Fame, the Roosevelt has a swanky atmosphere and a nice pool. Marilyn Monroe once lived here for two years!

West Hollywood: Chamberlain West Hollywood. Another fancy property with a nice gym and nice pool in the heart of the neighborhood.

Santa Monica: Georgian Hotel. This is the iconic hotel right on Ocean Avenue with the aqua-colored art deco exterior. It was built in 1933 and many rooms have ocean views!

Advantages of Visiting Los Angeles Without a Car

Walking = exercise, sun, and a good opportunity to see the city. So do it!

The amount of money you’ll save by skipping the rental car is huge. The bus here is cheap – just $1.75 for a ride! A seven-day transit pass costs $25, or the price of a typical cab ride. One cab ride versus an entire week of buses? I know which one I’m going with.

And even when traffic does slow down, I’d rather be on a bus with the ability to read a book or play on my phone than stuck on a freeway with no hope of moving anytime soon. 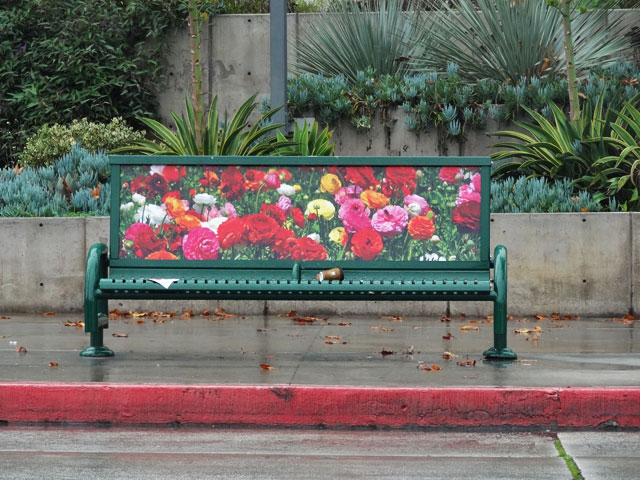 The other awesome thing about L.A. transit is the Metro cell phone app, which pulls up a list of all the buses that will be arriving at your location within the next several minutes. There’s no guessing about when the next #4 will be arriving when you have the app.

So why does everyone who lives in L.A. insist that it’s not possible to get around here without a car? I’m not quite sure. I suppose it’s because Angelenos just aren’t used to taking the bus, so they write it off without even considering it.

Resources for Visiting or Living in Los Angeles With No Vehicle

So it’s definitely reasonable to visit Los Angeles without a car. Just use Google Maps! They have all the current bus and public transit information.

Is it possible to live in Los Angeles without a vehicle? The answer, again, is yes – if you’re really committed to the idea.

You’d probably need to live near one of the primary bus lines, and you may want to own a bicycle. L.A. is not a particularly bike-friendly city, but there are bike lanes in West Hollywood, Silver Lake, Culver City, and several other neighborhoods. Bike rental companies are also an option, though they’re not as abundant as in other major cities.

Of course, these days, with Uber and Lyft, you can get around easily and reasonably cheaply in any city like Los Angeles. It has never been easier to live in LA without a car!

Check out this insightful article detailing the author’s experience living without a car in L.A. for two full years (which saved her a cool $10,000):
(broken link removed)

Here’s another guy who did it for eight years:
http://thesource.metro.net/2011/11/28/i-lived-la-for-eight-years-without-car-can-too/

And more on the debate of car vs. no car:
http://www.rootsimple.com/2013/05/on-living-in-los-angeles-without-a-car-a-debate/

So, yeah. Los Angeles. Totally doable without a car!

13 thoughts on “How to Visit Los Angeles Without a Car: Tips to Get Around the City”