I love quirky traditions and rituals. The first time I heard about the Sourtoe Cocktail Club in the Yukon of Canada, I had a hard time believing it was real. They serve you a drink with a mummified human toe in it? And you have to down the alcohol while the toe touches your mouth?

Behind the Sourtoe Cocktail Club Experience

Capt. Dick – he’s not the original Capt. Dick Stevenson, who retired – makes himself at a home in the corner of the Downtown Hotel bar in Dawson City, Yukon. For a fee of $5 (that’s in addition to the cost of the actual drink), you can earn the privilege of having a toe inserted into your shot glass. 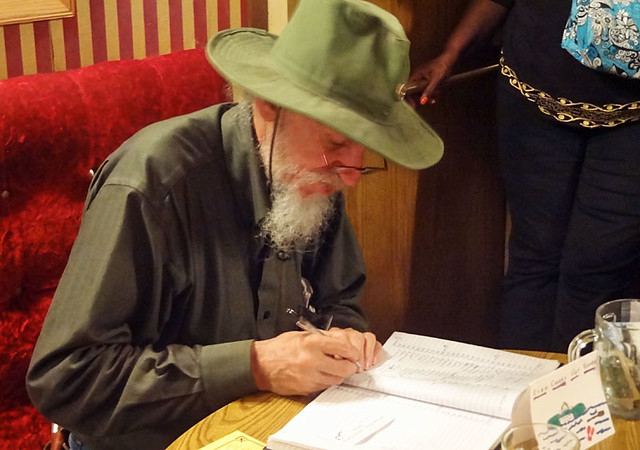 What kind of liquor is in a Sourtoe Cocktail? The preferred beverage for the Sourtoe Cocktail is Yukon Jack whiskey, though you’re allowed to use just about any drink you like, including soft drinks. One exception is milk, which would apparently harm the toe.

How many toes are there? There is just one sourtoe at any given moment. Between each drink, it is dried and placed on a bed of salt. The liquor presumably kills any germs that would build up. Over the years, it has been replaced eight or nine times for various reasons.

Toes have been stolen and lost. Twice, it was even swallowed – once on accident and once after a dude’s friends convinced him that he actually had to swallow the toe to join the Sourtoe Club.

Where do the toes come from? They come from all over the place. People who have heard about the Sourtoe craze even mail them anonymously when they find themselves with a severed digit. The current appendage was reportedly donated after it was lost during a lawn mower accident. Yum… doesn’t that sound delicious?

Years ago, when the Sourtoe tradition began, the toe was placed in a full-sized drink. But over time, that changed to a single shot. 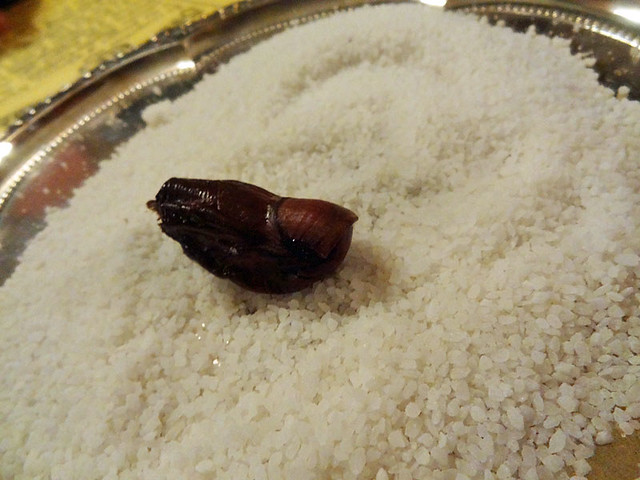 Based on all the Sourtoe drinkers I witnessed (it was Dawson City Music Festival weekend so the place was packed), I can offer a few observations that may be useful for anyone seeking to earn his or her own Sourtoe Cocktail Club certificate.

When Sourtoe Cocktails are consumed, one of two things tends to happen: Either the toe sticks to the side of the glass and doesn’t really fall against your lips at all; or the toe plops out of the glass and falls all over the face of the drinker, leading to great embarrassment for the drinker and lots of laughs for onlookers. 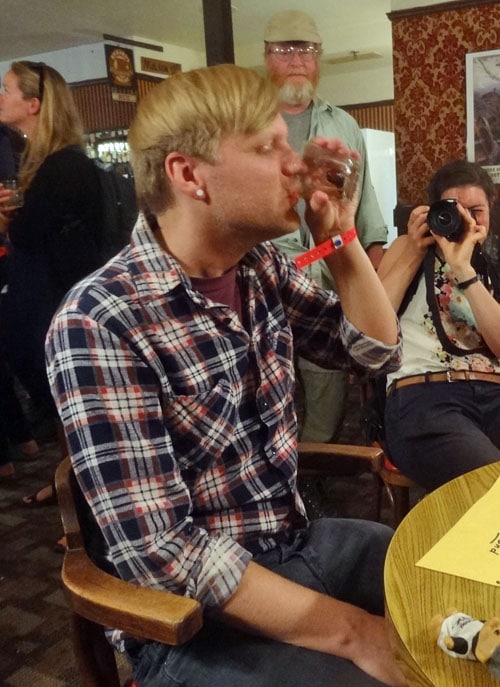 I had the former experience. In fact, here’s a little secret: After I sipped down my shot, the toe was stuck to the side of the shot glass and hadn’t yet touched my lips. That’s when Dick said, “Congratulations!” If I wanted to, I could have gotten away with not touching the toe at all.

But that would be cheating, and I did not stand in line just to rob myself of the true Sourtoe experience. So I shook the glass a little until the toe hit the top of my lip. What did it feel like? It didn’t feel like anything, just a lump of solid matter against my skin. I never even thought about how disgusting it was, so I wasn’t psyched out at all. I think that’s the key. 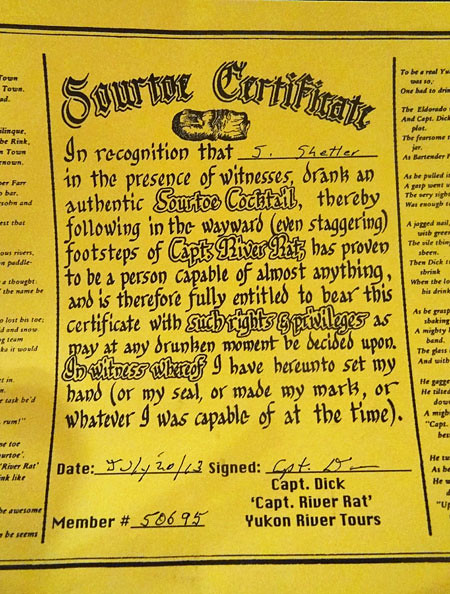 You’ll get this large Sourtoe Cocktail Club certificate, plus a wallet-sized business card confirming your entry into the club.

Go Ahead and Join the Sourtoe Club!

No, the Sourtoe Cocktail Club makes no sense. Yes, you should stop into the bar and do it when you’re in Dawson. It’s one of the most quirky and fun things to do in Dawson City!

In fact, if you’re on an Alaskan road trip, you should detour all the way into Dawson just to have the Sourtoe experience. And to obtain the awesome Sourtoe certificate and bragging rights you’ll acquire during the experience.

What’s funny is that I have yet to try poutine, one of the unofficial foods of Canada, because it looks gross. But a human toe in my drink? No problem!

Would you join the Sourtoe Cocktail Club?

14 thoughts on “Becoming a Member of the Sourtoe Cocktail Club!”