If you had asked me to imagine the weirdest jelly bean flavor that Jelly Belly makes, I might have guessed something like Pomegranate, or Coffee, or Hamburger.

Yet I discovered all of these strange varieties at the Jelly Belly facility in Pleasant Prairie, Wisconsin, near Kenosha. Their gift shop has a tasting center where you can sample dozens of flavors. This Jelly Belly warehouse ranks as one of the coolest things to do in all of Wisconsin.

You can even buy some of these awful-tasting jelly beans online. They’re sold in packages called “Beanboozled.” Basically, it’s a mixed package that includes some sweet flavors, mixed in with disgusting ones. They look exactly the same, so you won’t know which one you’re biting into until you taste it!

I could have stood there for hours trying every colorful bean they had (I’ve been known to do that in the past…), but there were other customers so I couldn’t be rude and monopolize the sample guy’s attention.

Next time I will definitely try them all! But on this visit I only tried a few. Since I was a little frightened of Vomit and Earwax, I went instead with a couple of the flavors from the “disgusting” line that seemed a little more tame: Soap and Grass.

Both flavors were pretty spot-on. Soap had a minty tang, and Grass had a really grassy flavor, but somehow it wasn’t awful. Mixing those odd flavor notes with the sugar of the jelly bean actually made for a tolerable candy experience. How about that – the disgusting Jelly Belly flavors weren’t that off-putting after all! 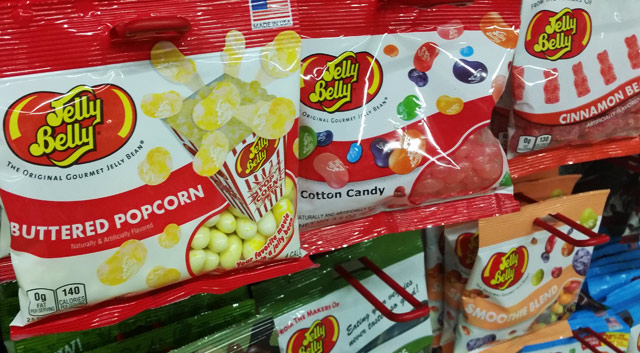 Jelly Belly goes to extreme lengths to create each flavor, testing its flavors and scents over a period of months to get that winning combination. I can’t imagine what they went through to test and create the vomit flavor, and I sort of don’t want to think about it.

I already mentioned some of the most disgusting flavors. Other hideous jelly beans include such flavors as Spoiled Milk, dead Fish, Stinky Socks, and Toothpaste.

I tried a few of the other more conventional flavors as well. One of Jelly Belly’s most popular flavors these days is Buttered Popcorn. The butter smell on the bean was overwhelming, and that made for a delicious treat, if you like popcorn, that is. I could toss these back just like eating real popcorn.

The new Pancakes flavor was wonderful – it tasted just like the last bite of pancakes on the plate, gooey and drenched in maple syrup. Cantaloupe was another winner, offering that mild, sweet, fruity taste. Chocolate Pudding was as rich and tasty as it sounds. So many great tasting candy beans!

In addition to the sampling station in the gift shop, the warehouse offers free tours that show guests how Jelly Belly candies are created, manufactured, and shipped. The Jelly Belly Express is a train that takes visitors through the facility, where they view mosaic art made from jelly beans and a Candy Couture exhibit – fancy dresses made from beans. The 1920s fringe dress contained 7000 beans and weighed 20 pounds. 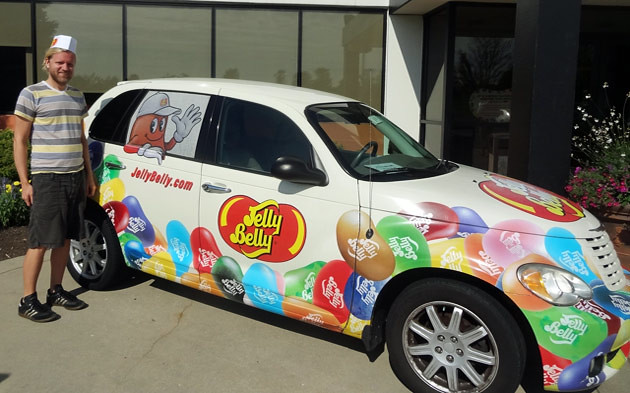 Tours are available everyday from 9 am to 4 pm, while the jelly bean store stays open until 5 pm. The store is closed on holidays. There’s plenty of free parking available in the lot outside the factory.

Stop by sometime, put on your paper hat, and embrace the whimsical environment at the Jelly Belly Kenosha factory. And enjoy those disgusting Jelly belly flavors (and the good ones too!)

Kenosha is within driving distance to Spring Green, home of the House on the Rock attraction and the world’s largest carousel. 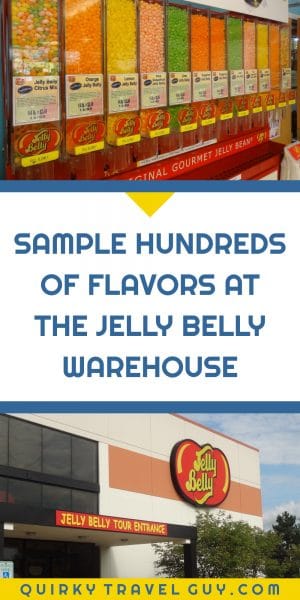