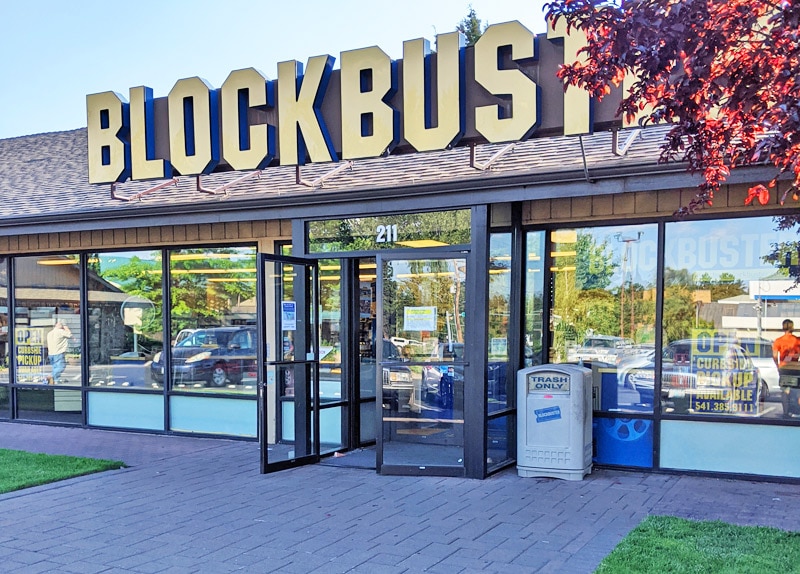 I was expecting the last Blockbuster store in the world to be a novelty attraction. I imagined a business that caters to tourists, with museum-like exhibits about the history of Blockbuster Video and memorabilia from famous films.

But to my surprise, that’s not what I found. Instead, this modest store in Bend, Oregon is literally just a stereotypical Blockbuster store like those you remember from the ’90s, with aisles and aisles of DVDs sorted alphabetically by film genre, plus a bargain bin of old movies for sale, and a section of movie candy.

The walls are still yellow. One of them holds a giant selection of new releases. Local residents browse the shelves like it’s still 1997. I overhear a mother and young daughter debating which DVD to rent for the night.

The only indications that this isn’t a Blockbuster store from the ’90s are the small display case of souvenir shirts, and a tiny memorabilia section along the back wall, featuring the actual hood worn by Russell Crowe in Robin Hood.

Here’s what you’ll see if you visit the last Blockbuster store in the world!

Sights Inside the Last Blockbuster Store in the World

From the outside, the Bend Blockbuster is just like any old store in the chain. It sits along a commercial stretch of NE Revere Avenue in Bend. It’s right on Route 20, aka the longest road in America, and it’s about two hours from Rim Drive in Crater Lake National Park.

I really didn’t think that actual videos would take up more than a quarter of the store. How wrong I was! About 90% of the store is still just rows of DVDs for rent.

There are maybe 10 customers in the store while I’m here. I appear to be the only tourist. The others diligently browse the options in the comedy and drama sections. It’s a total feeling of nostalgia walking these aisles, seeing the movie cases on the shelf, and observing the customers making legit DVD rentals in the year 2023.

That small memorabilia corner has some interesting stuff. On display is a handwritten note from Russell Crowe, who explains that the hood was one of three he wore in the 2010 movie. It sits right there behind a glass case. 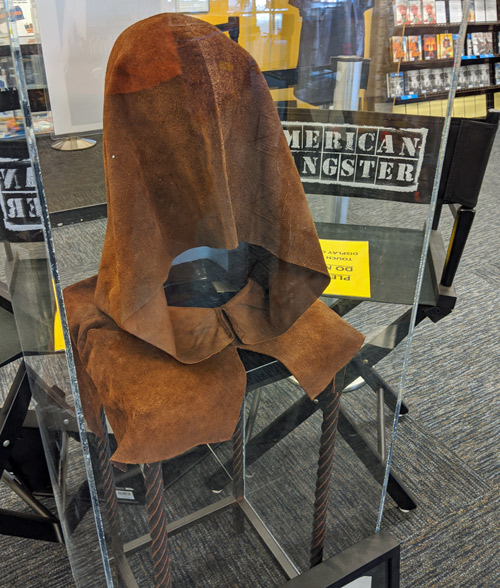 Another piece of movie history is a framed Clerks poster signed by writer-director Kevin Smith, who writes, “To the good folks at the only Blockbuster that matters!” 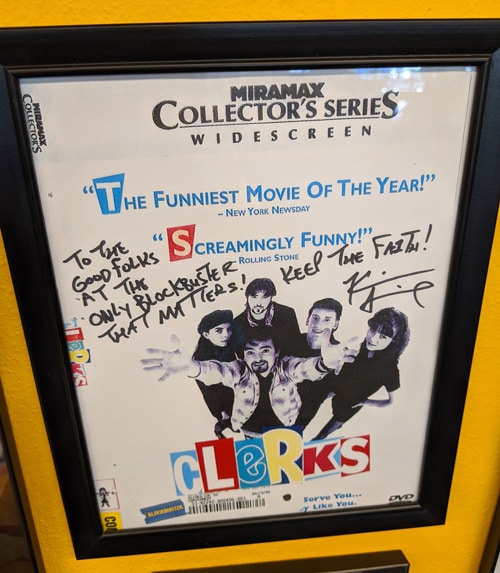 There’s also a visitor guestbook, and actors’ chairs from Crowe and Denzel Washington from when they starred in American Gangster. These pieces of movie history are cool, but they should drastically expand this section.

Many of the visitors to this store come for the novelty of being inside the last Blockbuster store in the world. They are not here to rent DVDs. They want souvenirs and cool exhibits. The folks running this place should consider making half the store a museum to cater to those tourists.

The Bend Blockbuster does smartly sell blue and yellow tshirts, hoodies, knit hats, fanny packs, magnets, and other souvenirs. I picked up a bright yellow tshirt with the classic Blockbuster logo! You can order on the store’s website if you can’t visit in person. 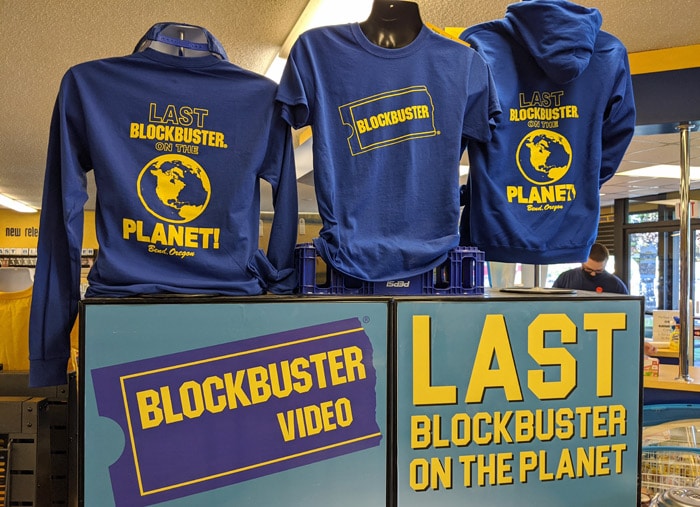 How This Became The Last Remaining Blockbuster

Two decades ago, Blockbuster was about as big as Netflix is now. It was the place everybody went to rent the latest movies. The company expanded dramatically from its first store in Texas in 1985 to around 9000 stores worldwide in 2004. And then everything fell apart.

Unfortunately, Blockbuster failed to innovate. Blockbuster made one massive mistake after another, as detailed in this article. The company turned down a chance to purchase Netflix for $50 million, and instead tried to create an on-demand video service with Enron that went nowhere.

The company eventually went bankrupt in 2010. Most corporate stores were closed, but some privately-owned locations were allowed to remain open.

A few years back, two stores in Alaska closed, making the Bend Blockbuster location the last one in the U.S. And last year, stores closed in western Australia, leaving the Bend store as the only Blockbuster left in the world!

Future of the Last Blockbuster 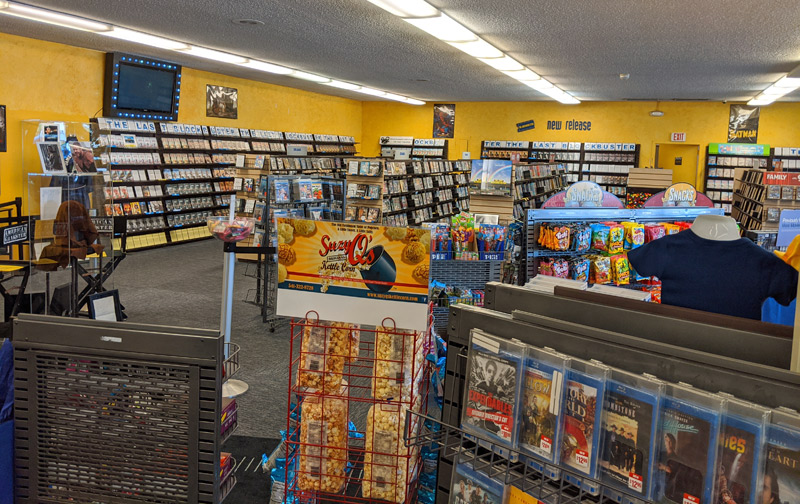 How long will the Bend Blockbuster remain in business? I don’t see any reason why it shouldn’t remain profitable for many years to come. If the folks in charge do more to reach out to tourists, they can ensure a steady stream of visitors for a very long time. People always love quirky museums and attractions!

In 2020, the store made news by offering its space on Airbnb as a place to sleep over for three nights. That sort of out-of-the-box thinking should keep the Bend Blockbuster going strong.

If you found your way to this article, you’re probably aware of The Last Blockbuster, the 2021 Netflix documentary about this particular store, with larger commentary on the overall decline of the Blockbuster brand and movie rentals in general.

It’s a fascinating documentary and a highly recommend it. It features actors and comedians such as Kevin Smith, Brian Posehn, Ron Funches, and many more, reminiscing on the act of going to the video store with your family.

When I was growing up, I remember going to Blockbuster occasionally, although I preferred the local, non-chain stores, because they were cheaper.

If you have your own memories of Blockbuster video, consider making a stop into the last Blockbuster store in the world in Bend! You will be amazed at how it feels exactly like your remember.

If You’re Going: The Last Blockbuster Store in the World

Address: 211 NE Revere Ave, Bend, OR 97701 (Google Map)
Cost: No cost to enter, but bring some $ for souvenirs
When to Visit: Open 11 am – 8 pm daily
Time Needed: 10-20 minutes
Website: https://bendblockbuster.com
See Also: The Blockbuster Board Game for Movie Fans (Amazon)