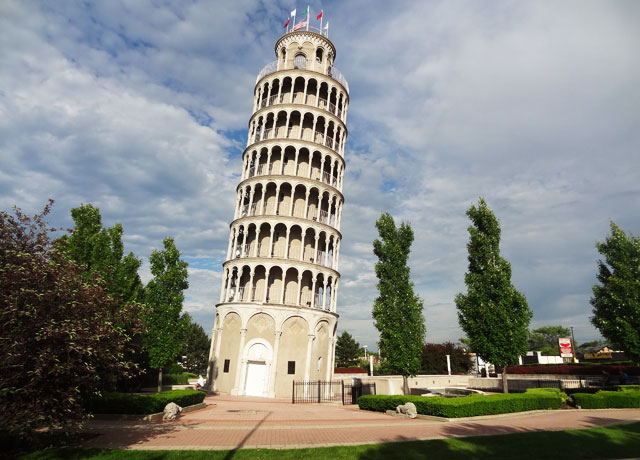 If you don’t want to go all the way to Italy to create your very own “I’m holding up the Leaning Tower” photo, you can cheat by heading to Niles, Illinois (just outside Chicago) for a visit to the Leaning Tower of Niles. It’s a half-scale replica of the famous tower from Pisa.

While that famous Pisa tower has been standing since the year 1372, the Niles version was completed in 1934, with the work commissioned by businessman Robert Ilg. It’s 94 feet tall and has a 7.4 foot tilt that gives it the signature leaning appearance.

The Tower was listed on the National Register of Historic Places in April 2019. It’s a must-see for fans of quirky roadside attractions when you’re visiting Chicago or passing through on a Midwest road trip!

About the Leaning Tower of Niles

Niles, Illinois is a Windy City suburb. It’s situated about 15 miles from downtown Chicago, but only a short distance from Chicago’s northwest neighborhoods like Jefferson Park and Irving Park. For that reason, some people may refer to the Niles tower as the “Chicago leaning tower.” 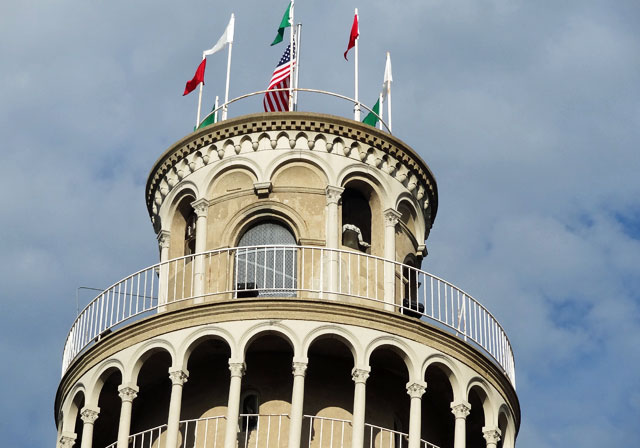 The Niles version is 94-foot-tall structure made from concrete, steel and stone. This Chicago tower isn’t in a setting quite as picturesque as the Pisa tower – it sits next to a YMCA, which smartly calls itself as the “Leaning Tower YMCA.”

Touhy Avenue is a busy, wide street, so loads of cars pass by all the time in front of the tower. So expect a busy urban setting if you come visit. It’s not a picturesque countryside setting at all! 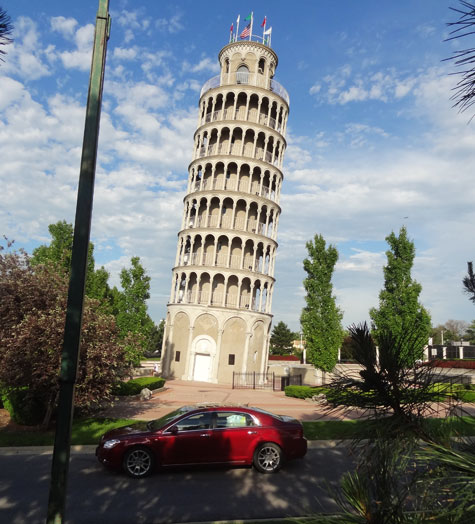 For awhile, there was some urgency to come visit the tower. A 2014 study revealed that the structure was in need of $600k in repairs, and it wasn’t likely that local government would shell out that kind of money on what is essentially a novelty attraction.

However, it’s 2020 and the Niles Tower is still standing and looking as good as ever. In fact, in December 2019, the Tower received seven new bells, some of which had been removed the previous year for restoration.

One of the bells dates back to 1623, and another dates to 1747. These bells are much older than the tower itself!

And here’s exciting news: According to a press release from the village of Niles, current plans call for the interior of the tower to open to tourists and for the bells to ring for the first time in years! Concrete restoration and railing installation have already taken place. So very soon, you may be able to go inside and up the tower! But for now, you’ll have to settle for taking silly pics from the outside.

If you’re in town, check out our ideas for day trips from Chicago!

Would you like to visit the Leaning Tower of Niles?

DON’T MISS THESE OTHER QUIRKY CHICAGO ATTRACTIONS:
–The Green Mill – Al Capone’s favorite jazz club
–The strange and oddball exhibits at the Museum of Surgical Science
–Guide to the best Chicago food, including hot dogs, donuts, and deep dish pizza!
–The Tribune Tower, a skyscraper with chunks of historic buildings from around the world embedded into its exterior

2 thoughts on “Quirky Attraction: The Leaning Tower of Niles in Niles, Illinois (Chicago)”