If you’re visiting New York City, chances are you’ll be checking out the Statue of Liberty, Empire State Building, and stopping by some of the best New York City neighborhoods. For those looking for something less touristy, here are a couple of lesser-known suggestions for unusual things to do in Manhattan.

Central Park gets all the pub, which is understandable. And the High Line has the hip factor going for it. But Riverside Park can be even better if you’re looking for peace and quiet. Situated along the west side of Manhattan from the UWS to Harlem, the park covers four miles from 72nd to 158th streets.

Some of my favorite moments in NYC involved heading into Riverside Park and wandering through the woods. An actual hike in New York City! With real creatures like squirrels and birds! It was so strange to escape the concrete jungle and feel like I was back on a hike at summer camp.

2 Chocolate by the Bald Man

Attention, chocolate lovers! I was introduced to this place (officially called “Max Brenner“) near Union Square by my cousin during my first NYC summer. It’s kind of like a Starbucks for chocolate. They have numerous different varieties of hot chocolate, coffee, frappes and fondue. I opted with the “white chocolate” flavor, which was delightful and almost justified its price tag – something like $4-5 if I recall correctly. 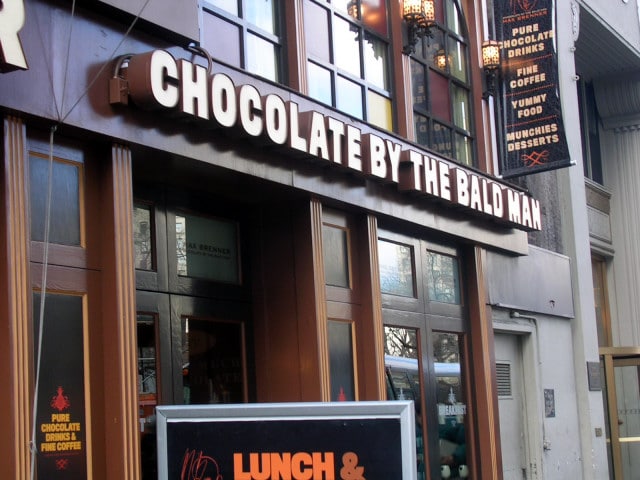 They also serve regular food if you want an entire meal (or just a snack, like their chocolate pizza.) You can also grab one of their pre-packaged candy chocolate treats to take with you.

I must include at least one shopping spot in my list, and this used and vintage store in Williamsburg is my favorite. My love for Beacon’s began in the mid ’00s because they were the first thrift store I had ever seen that didn’t separate pants by gender, but instead combined all the men’s and women’s slacks and sorted them by waist size. Back then tight pants were becoming the rage, and guys were wearing girls’ pants and vice versa, so grouping them together was an awesome convenience.

Though their selection has been hit-or-miss in recent years, Beacon’s Closet still has one of the biggest selections around. They’re a bit more pricey than the average thrift store, but if you find something good, it’s worth it.

Get off the beaten path not far from the World Trade Center to find this unusual, elevated parklet that memorializes the Irish Potato Famine of the 1840s. It contains an authentic, roofless Irish cottage, as well as a garden area with native Irish plants. It’s a bit of history and peace right in the heart of a massive urban landscape.

Wanna pay $6 for a peanut butter & jelly sandwich? Then this adorable little place near NYU is the spot for you. They have all sorts of weird peanut-based concotions, like the Pregnant Lady (peanut butter & pickles), the Peanut Butter BLT (yes, with bacon), the Cookie Dough Surprise (PB with cream cheese and chocolate chips), and the Jerry Seinfeld Comedy Special (a bagel with peanut butter, honey and cinnamon.) That’s a really quirky restaurant idea!

My picks might be a bit obscure, offbeat, unexpected, and weird… and that’s the beauty of Manhattan and NYC. Everybody has their own lesser-known hangouts that they enjoy. What are yours?

12 thoughts on “Five of My Favorite Lesser-Known NYC Places”