That paranoid feeling I often get when I approach the baggage carousel – Oh no, what if my bag never shows up? – was finally realized on my flight to Anchorage, when United Airlines lost the pack with all my camping supplies.

My friend and I waited and waited, yet our garish orange pack never arrived. We spoke with the lady at the United baggage counter, who assured us it must have just missed the flight and would probably arrive on the next one, scheduled for just after midnight. She offered to drive it up to Talkeetna, a couple hours away, where we were staying in a hostel for the night. Though it was an inconvenience, I figured all would be forgiven if the bag showed up in the morning.

Except it didn’t. And since we were scheduled to camp in Denali National Park that day, we needed to replace our entire inventory of camping equipment in a hurry. Gone was our tent, sleeping bags, first aid kit, camelbak, flashlights… pretty much all of the gear we had spent months finding and purchasing online. 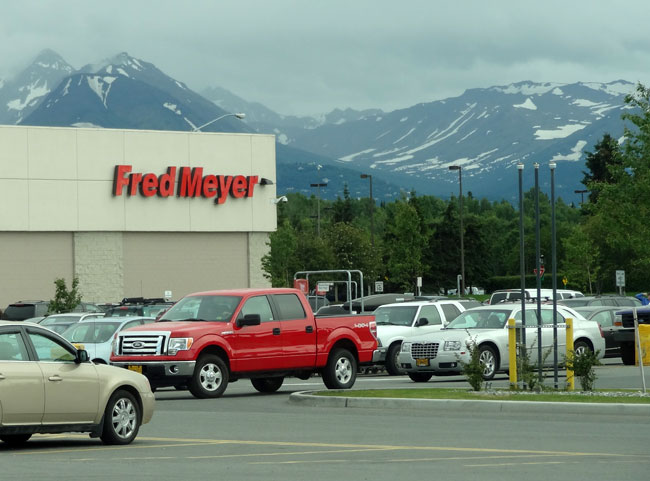 We had to drive 90 minutes back to Wasilla, the nearest town with real stores. So we got up super early (starting a pattern of operating on minimal sleep that would become the theme of the entire week) and began the journey. I assumed we’d have to buy everything at Target, but we also discovered a Fred Meyer and a Sports Authority there. We couldn’t afford to blow our budget, so we decided to buy the cheapest supplies we could find, no matter how crappy they were. (United had offered to provide a small level of reimbursement, but that wouldn’t come until much later.)

With limited time, we embarked on a whirlwind shopping spree, which still makes me smile. I dropped him off at the Target and Sports Authority, conveniently located next to each other, and drove over to Fred Meyer. We each set off with a grocery list of important items and frantically exchanged texts about the prices of each. 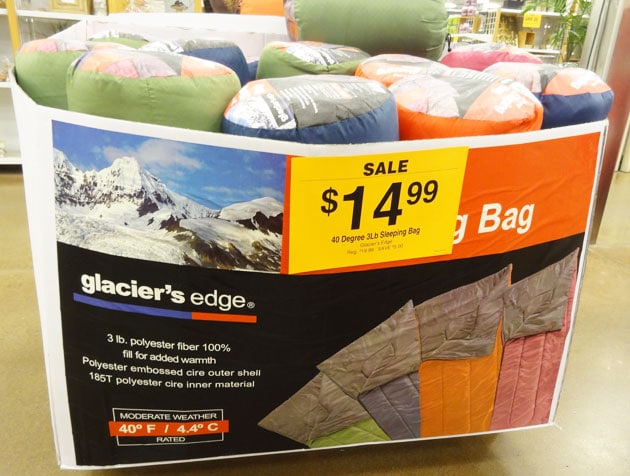 At Fred Meyer we found sleeping bags on sale for $15. Score! They were 40 degree bags, which was fine for this particular week in Alaska. We also found a tent on sale for $27. It was obviously not a quality brand, but as long as it provided shelter, it would do the trick. At Target, we spotted little micro travel pillows in the bargain bin for $2.50 each. We picked up $3 flashlights, though it turned out those were totally unnecessary since at this time of year, it stays semi-light all night long.

We also had to buy a new pack. Properly replacing my 65L bag was out of the question, but Target came through with a $35 duffel bag with straps that could turn it into a somewhat comfortable pack facsimile. Ultimately, we got everything in less than 20 minutes for around $100 (luckily, there’s no sales tax in Alaska) and felt proud for salvaging our camping trip.

All of these supplies for less than a benjamin! 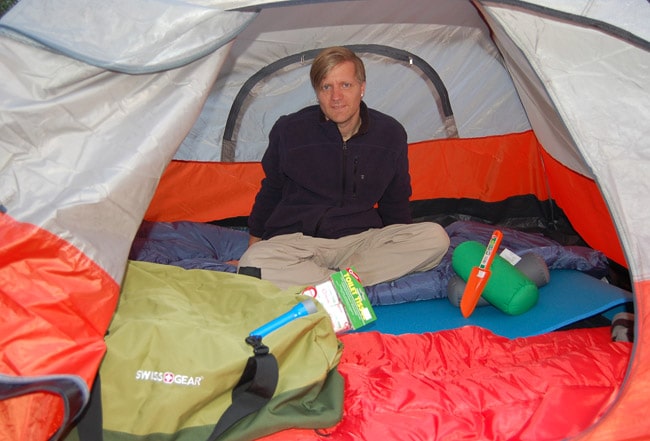 In Denali, we received more lessons in perseverance. As I feared, the budget tent leaked when it rained. We had a towel to mop up the dampness, so it was tolerable. The following night, we camped out in the backcountry, without realizing the area we selected had a higher elevation (around 4000 feet) than most of the spots along the main road (around 4000 feet.) At night, the wind rocked our tent like we were on Mt. Everest, and a brutal chill took over. While curled up inside the sleeping bags, we stayed surprisingly warm, but when I woke and tried to unzip the door flap, I realized it was stuck.

The zipper was frozen shut.

It had apparently gotten down into the low 30s overnight. The ground had frosted and the rain droplets on the tent had iced over. Yikes. But we made it through. And now we get to tell the story about surviving freezing temperatures camping in the Denali backcountry, in a spot that happened to be right on the other side of a hill where we spotted a grizzly bear just an hour before pitching the tent. Fighting through the adversity led to a rewarding experience.

(More on the camping adventure next week. And more on the lost baggage situation – at the moment, United still has no clue where my bag is.)

There would be plenty of other hurdles during the week that I haven’t even mentioned yet, like locking our keys in the car hundreds of miles from the nearest locksmith. But Alaska is supposed to be rugged and tough, so perhaps it’s fitting that we encountered all sorts of obstacles. The important thing was that we never let them stand in the way of having an epic adventure.

Have you ever faced unexpected challenges while traveling?

20 thoughts on “Lost Luggage and Frozen Tents: Lessons in Perseverance From Alaska”