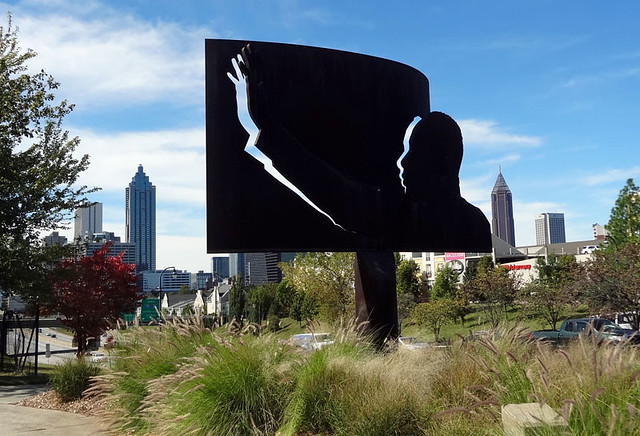 History is always best when you can experience it yourself. When you can sit in the pews at Ebenezer Baptist Church and hear recordings of the sermons that Martin Luther King Jr. delivered in that very room.

The Martin Luther King National Historic Site, sometimes informally referred to as the Martin Luther King Museum in Atlanta, offers that opportunity. You can walk through King’s birth home and see the rooms where he had dinner with his parents (always formal, with serious discussions of important issues), where he played with his siblings (he was a typical troublemaker as a boy), and where he grew into a young man who would later change the country and the world. 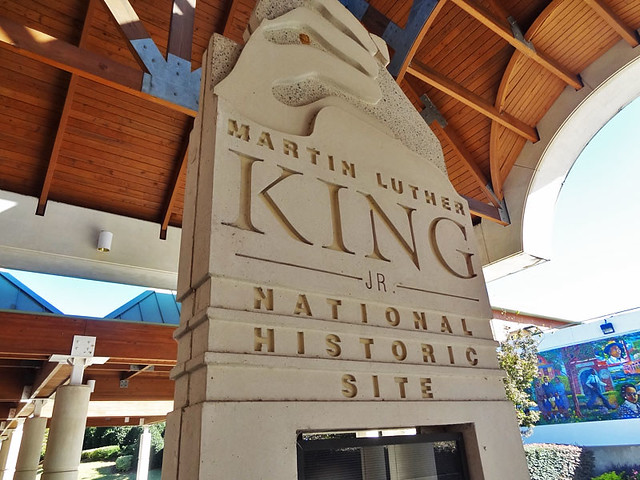 The Martin Luther King National Historic Site in Atlanta is incredibly inspiring. Besides King’s birth home and former church, you’ll find a bunch of exhibits on the civil rights battles of the ’50s and ’60s, a civil rights walk of fame, a colorful mural and a statue of Gandhi. Any visitor to Atlanta should really stop by to understand an important part of our history.

There’s so much to see at the museum site, which is easily accessibly by public transportation. The first thing you’ll notice after the welcome signs is a giant mural featuring MLK and many other faces from the civil rights era. 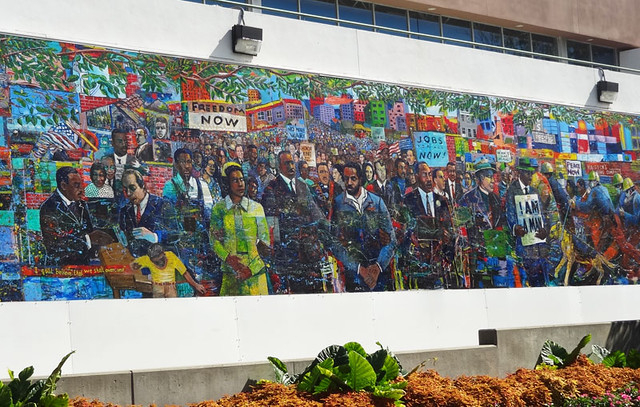 Just behind the main building is a statue of one of King’s idols. Gandhi was a huge influence on the young MLK, who traveled to India and met surviving relatives of Gandhi’s family. King admired and was inspired by the leader’s insistence on nonviolent resistance. 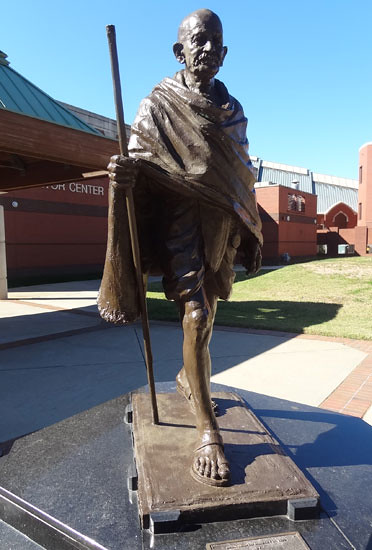 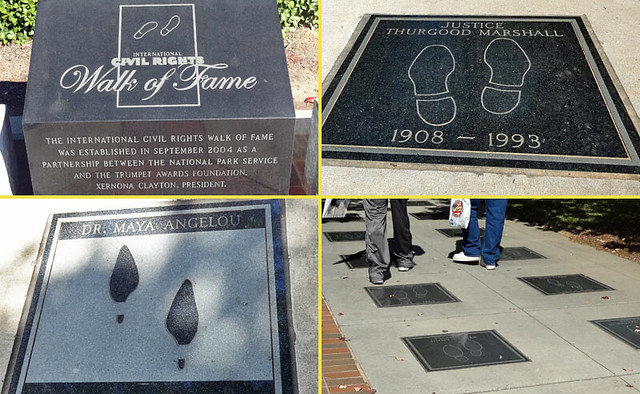 The eternal flame “symbolizes the continuing effort to realize Dr. King’s ideals for the ‘beloved community’ which requires lasting personal commitment that cannot weaken when faced with obstacles.” 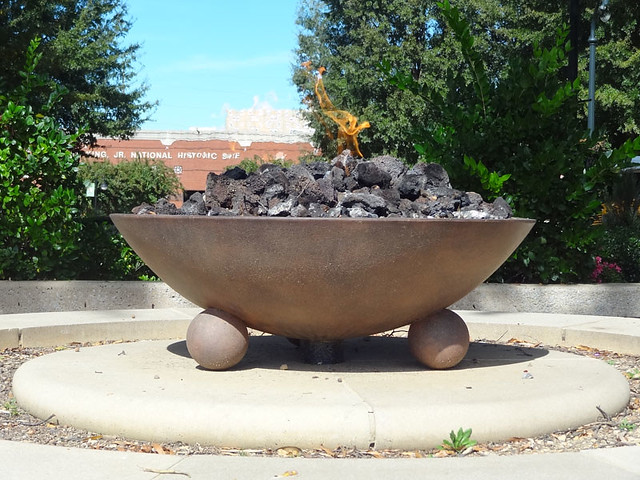 The tombs of Martin Luther King and Coretta Scott King as seen through the eternal flame. 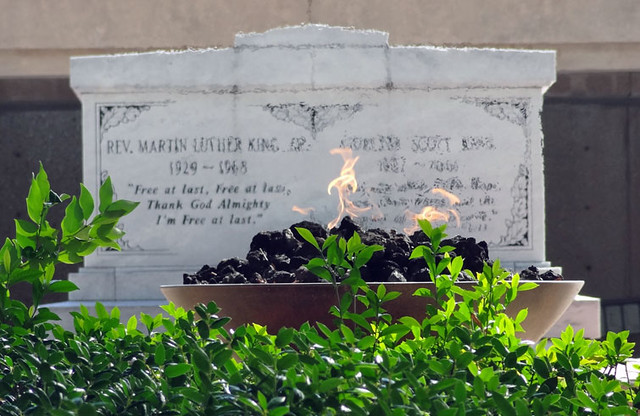 The Martin Luther King, Jr. Memorial in Washington, D.C. is very impressive. The site here in Atlanta includes a miniature model of “The Stone of Hope.”

The Main Hall is the area that would be considered the Martin Luther King Museum. Exhibits on display include numerous videos and audio clips from speeches King gave throughout his life. 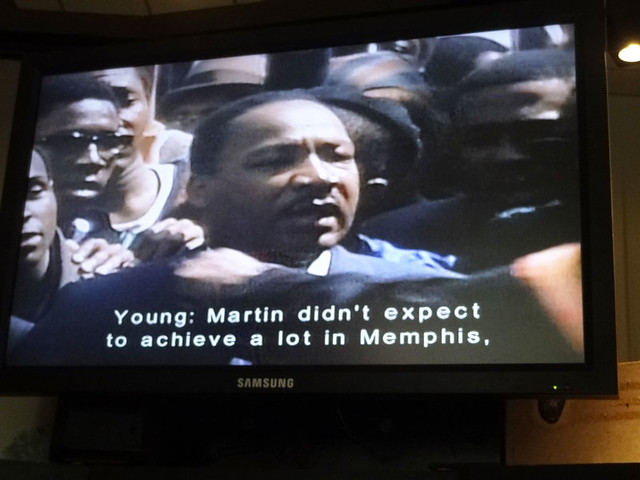 Newspaper clippings and other written and photographic exhibits remind visitors of just how awful the blatant discrimination was. 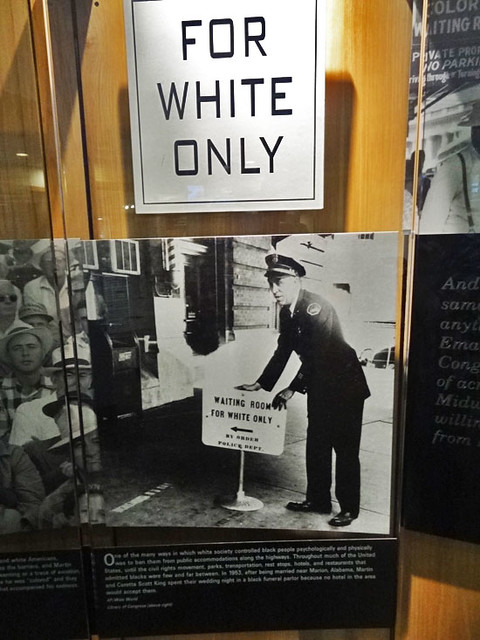 Also on display is the wooden wagon that carried King’s casket through the streets after his funeral. 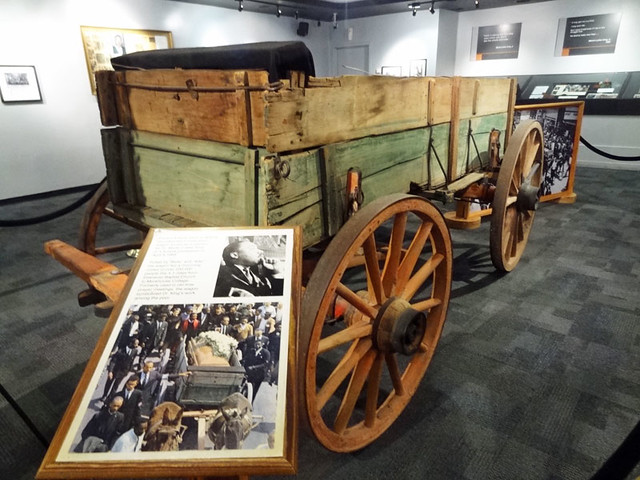 The heart of the site, to me, is Ebenezer Baptist Church. It’s one thing to see a short clip of a Martin Luther King speech on tv or YouTube. It’s another to sit in the pews and listen to an actual sermon delivered by the reverend in that same building. The church is open and it’s free to wander through. 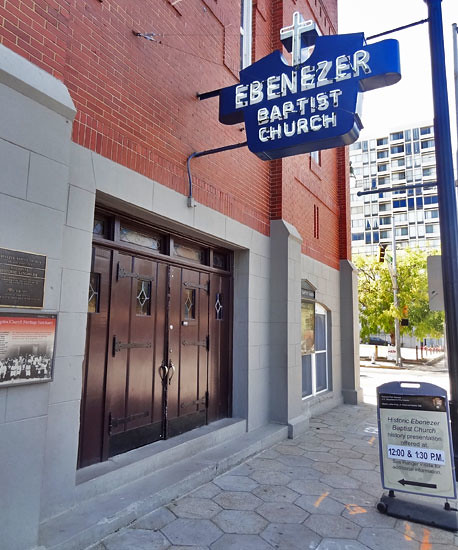 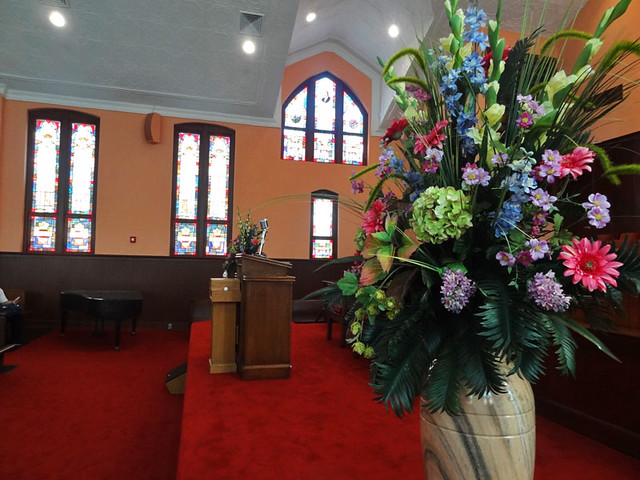 MLK Jr. joined his father as a pastor at the church in 1960. His message was inspiring, and his oratory skills were just as impressive. I sat for a good 20 minutes listening to his words and feeling great emotion at being in this historic location. 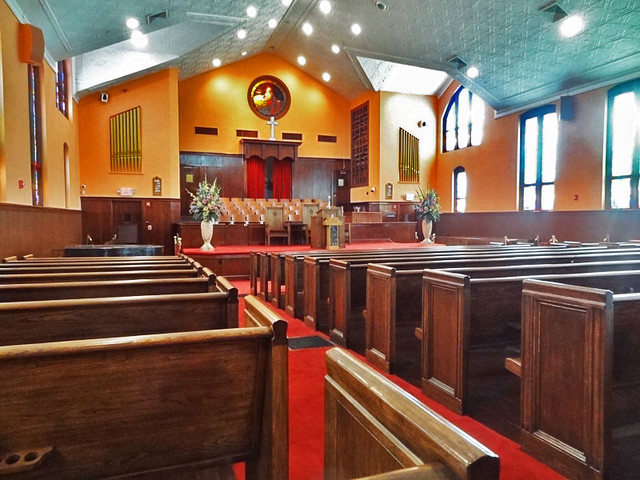 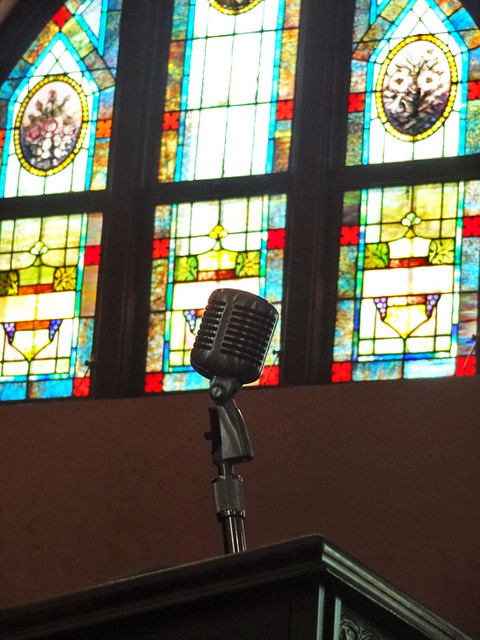 King’s funeral was held in Ebenezer Baptist Church in 1968. It is truly a historic location and a must-visit attraction.

If you visit the Historic Site, you’ll also want to take the free tour of King’s childhood home at 501 Auburn Avenue. Tickets are free but reservations are required. You can make an appointment when you arrive to the site. The earliest time slot I was able to get was three hours later, so I walked to the Jimmy Carter Presidential Library and came back for the MLK Tour.

The National Park Service recommends booking your tour early in the week, or on Sunday morning, as these are the least-crowded times for MLK house tours. Going very early in the day is also suggested to beat the mid-day rush. 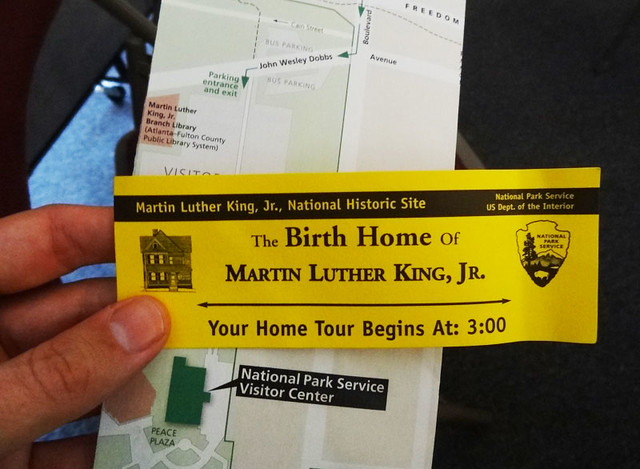 The house is locked, so the ranger has to bring over his keys and unlock the place to allow the small tour groups (less than a dozen folks) inside. 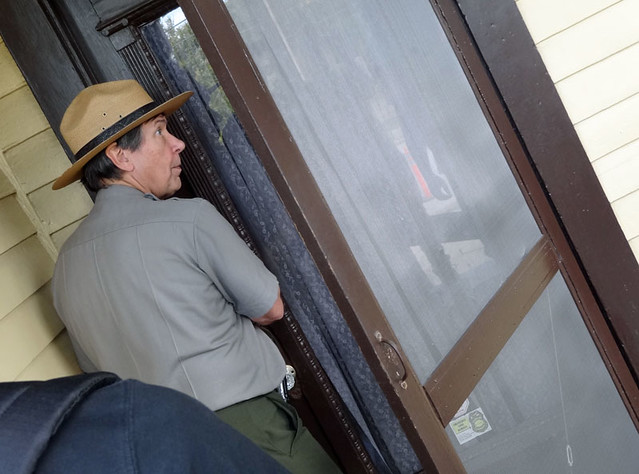 Photos are not allowed inside the birth home, but it’s an informative tour, as the ranger sprinkles in stories of things that happened in each room. The rooms have been designed to look at they did when King was a kid, with authentic pieces from the time. 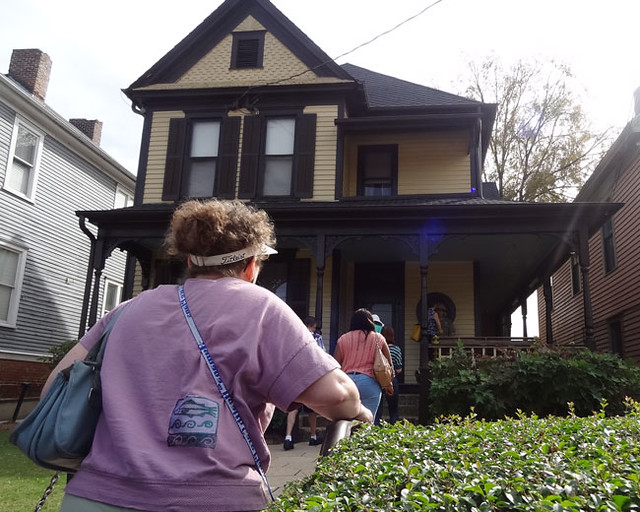 Seeing the exact place where Martin Luther King, Jr. was raised, where he preached, where he was inspired to make history, was one of the most fulfilling historical travel experiences I’ve ever had. I highly recommend a visit if you find yourself in Atlanta. 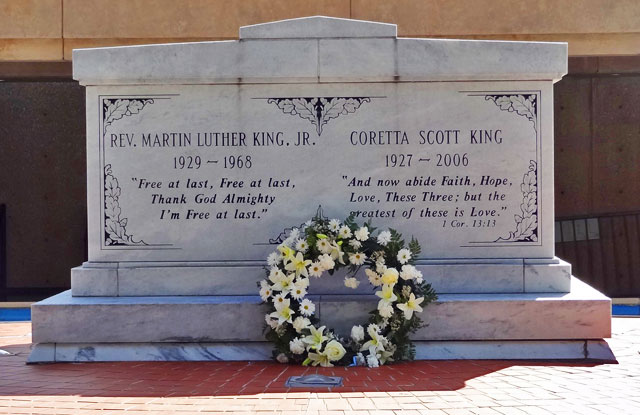 Another great Martin Luther King museum, the National Museum of Civil Rights, can be found in Memphis at the Lorraine Hotel, the very spot where MLK was tragically assassinated in 1968. It’s another incredibly powerful place.

NOTE: If you plan to visit the Martin Luther King National Historic Site / Museum, give yourself plenty of time to get there. Traffic in Atlanta is known for being out of control.