As I drove the long stretch of empty road in Michigan’s northern peninsula, I was starting to think I had made a mistake by not booking a hotel in advance.

I assumed I’d be able to find some sort of roadside lodging or old motel rooms on my way toward Wisconsin, but so far I had come up empty.

There were very few hotels on this road, and they were overpriced. It was starting to get dark, so I was pondering my options. Pitching a tent on the side of the road was starting to seem like a more realistic option with every passing minute.

And then I saw it.

The Old Motel Rooms at This Michigan Roadside Motel

As I raced down the road, I thought I spotted a motel on the left. As I sped past, I wasn’t sure if the place was still in business, because it looked dark and there was only one car in the parking lot.

The place didn’t look very inviting, but since I was short on options, I pulled a u-turn and headed back that way. Sure enough, it looked like a legit motel, albeit one that hadn’t seen a facelift in decades.

I cautiously tried the front door of the office and was eventually greeted by a nice older woman who informed me that, yes indeed, they had rooms available. And the price was only $45/night. Sold!

Okay, here’s where things got weird(er). The receptionist/probable owner told me she didn’t accept credit cards. I could pay with cash, but they didn’t have an ATM, so I’d have to go back to the gas station a mile up the street.

Or, she said, I could pay with personal check.

My mind raced with excitement with those words. I really was back in the ’70s! Paying for a motel room with a personal check in this day and age? That was a life experience I needed to have.

Fortunately, due to an unusual set of circumstances (I was driving across the country from Chicago to Seattle to relocate), I had my checkbook with me in the car.

So I wrote out a check, grabbed the room key and headed for my temporary home. After three straight days of tent camping, I was ready for a shower and a bed, no matter how scary.

Wood Paneling From the ’70s in the Rooms

The old motel rooms felt like such a time warp. It felt like I had been transported back to 1979. I was staying at the cliché hotel you see in all the old tv dramas.

I was half-expecting Jessica Fletcher to show up to investigate someone’s untimely demise. Hopefully I wouldn’t be the victim. But that was probably unlikely, since I hadn’t been fully established as a character and no one had motive to bump me off.

When I opened the room door, I was greeted with a wall covered in wood paneling. Oh no, I was definitely in an episode of Murder, She Wrote! Or maybe the Bates Motel.

It reminded me of the hotel rooms I stayed at with my family when I was a kid. I got the sense that nothing had changed at this place in the past few decades.

Look at this armchair. I was excited to be the first person in probably 40 years to sit in this chair! 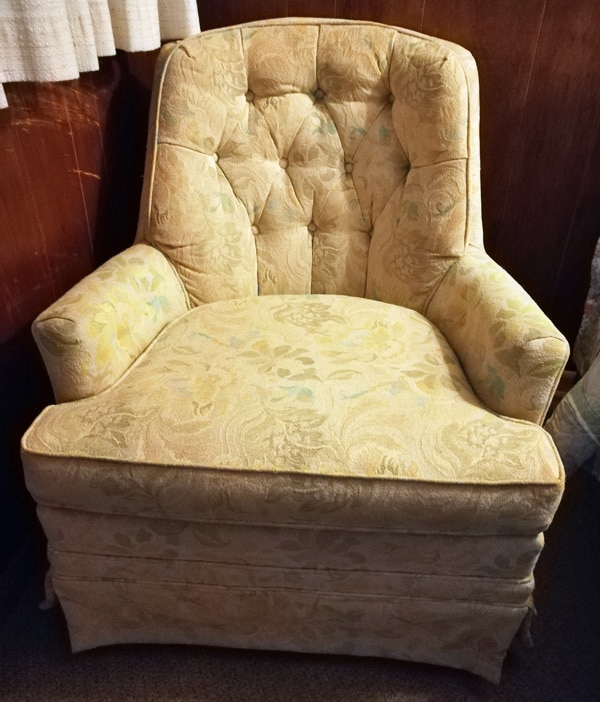 I’d love to have a vintage treasure like that in my own home. Perhaps I should have made them an offer.

Enduring a Night at the Hotel

I was expecting to hear voices in the middle of the night, or to have blood coming out of the shower. But the night was surprisingly uneventful and I got a solid night’s sleep and went on my way the next morning.

I’m sorry to say that I don’t remember the name of the old motel. But on this evening, I was driving west from Copper Harbor, Michigan, towards Wisconsin. I had just left Isle Royale National Park and was heading west on a road trip.

If anyone locates this hotel and wants to mention the name in the comments, go for it! I’m guessing they don’t have a website since they’re functioning as if it’s the year 1970.

Hey, staying at cheap motels is a good way to stay on a budget while traveling! So I have no regrets. In fact, I loved how old fashioned the place was.

I did manage to find the most antiquated hotel in America, and I stayed there, and it was strange and unnerving and slightly creepy. I would totally do it again.

UPDATE: The motel has been identified. However, the story is fairly sad. Read the backstory if you like. And support the motel if you’re passing through the area!

New to Quirky Travel Guy? I love to write about oddball museums and roadside attractions, plus road trips and national parks. Click the links to explore!