Imagine visiting Portland, Oregon, wandering around the city having a fun touristy day, when you suddenly stumble upon the smallest park in the world! 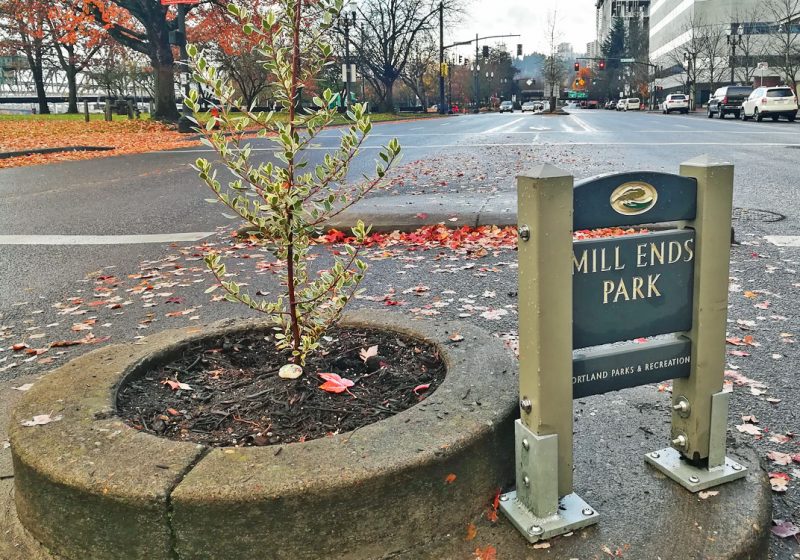 There it is, Mill Ends Park.

Ignore the colorful trees in the background of that photo – those are part of another park. Mill Ends Park is just that tiny patch of dirt inside the median.

Just two feet across, and 452 tiny square inches. That’s the whole park! Despite its tiny size, Mill Ends Park is an officially-recognized city park by the city of Portland. And that makes it a quirky tourist attraction.

How Portland’s Mill Ends Park Came To Be

Mill Ends Park owes its entire existence to a dude named Dick Fagan. In 1948, Fagan was a columnist for the Oregon Journal. The city of Portland created this round hole in the median, in anticipation of putting a light pole there. But for some reason, installation of the light never happened.

Fagan could see through his office window that weeds were taking over the spot, so he decided to go out and plant flowers there. He named the hole Mill Ends, which happened to be the title of his newspaper column.

Fagan went on to create a myth about the hole. The legend involves a leprechaun who granted him a wish. Fagan wished for his own park in Portland, and the leprechaun gave him this tiny park instead of a normal-sized city park.

Fagan wrote about the park for decades until his death in 1969 from cancer. Eventually, Portland recognized Mill Ends Park as an official city park, making it the smallest in the world. They held a dedication ceremony on St. Patrick’s Day 1976. 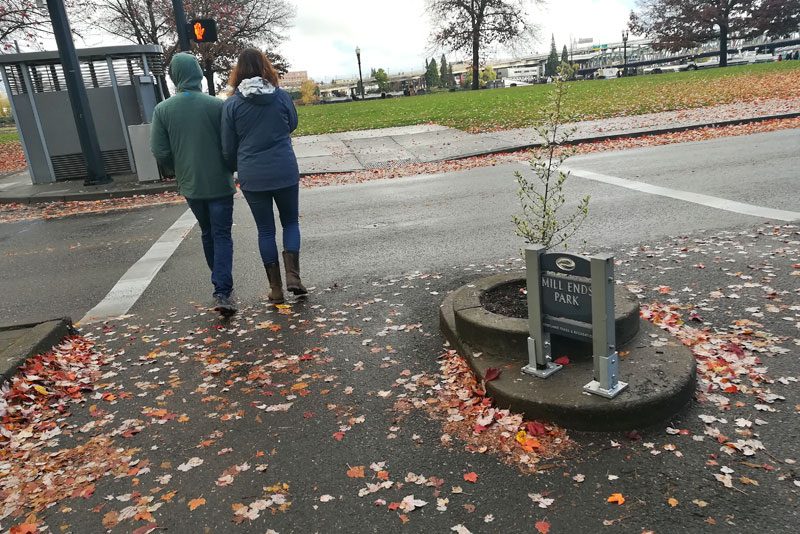 And the park has remained there ever since! Well, almost. In 2006, the park had to be temporarily removed because of construction on the street. It was replaced a year later at a grand ceremony that included live music and an appearance by Dick’s elderly wife Katherine.

Interestingly, that official “Mill Ends Park” sign wasn’t added until 2018, when Portland Parks & Recreation finally decided to give the spot some signage. There’s nothing acknowledging that Mill Ends is the smallest park in the world, however. I bet that when most tourists see the Mill Ends Park sign, they assume the park is the huge grassy area across the street, rather than the tiny median.

Is Mill Ends really the smallest park in the world? 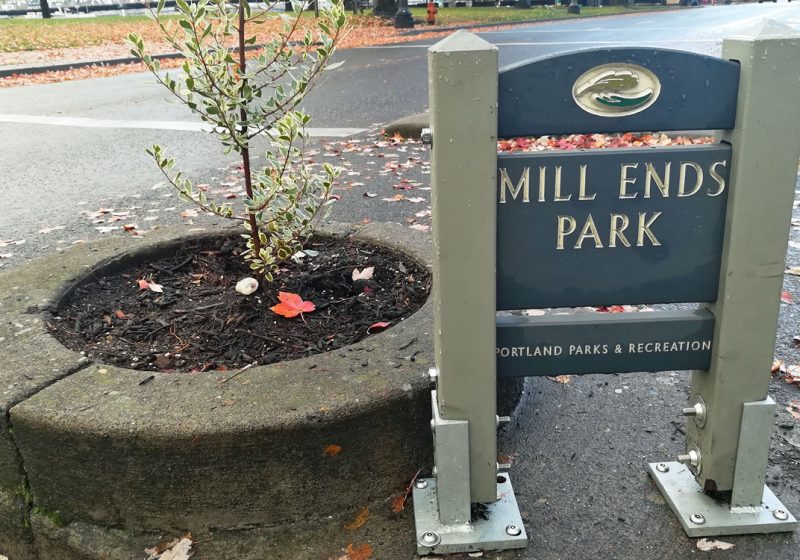 You might be thinking… how do we know this is really the smallest park in the world? After all, lots of places will claim to have the smallest or largest or oldest thing in order to attract tourists. But Mill Ends Park is the real deal. Here’s the official listing from the Guinness Book of World Records declaring it the smallest park. That makes it legit!

What kind of foliage does this tiny park possess? That depends when you visit. Photos over the years have shown a wide range of plants growing here, from a small shrub to bright flowers to a skinny little tree. Which has even been decorated with bulbs and tinsel for Christmas! 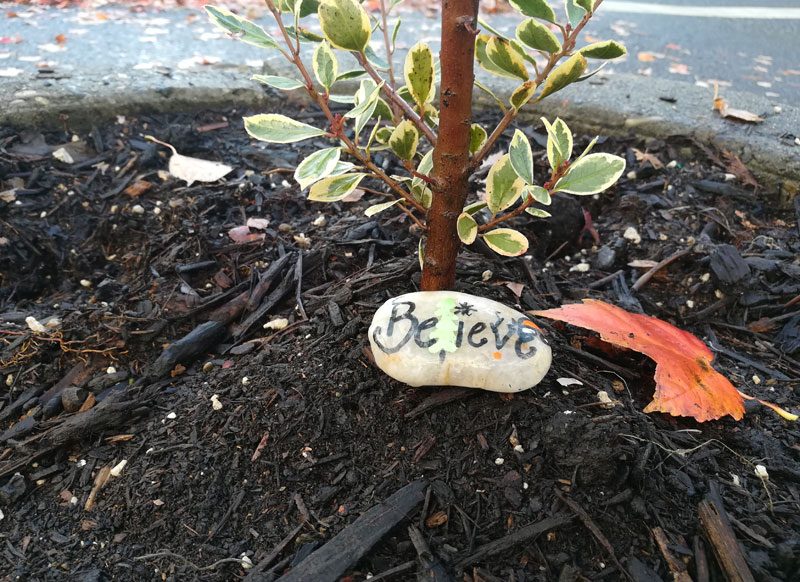 One time, the city even installed a mini ferris wheel in the park. Hilariously, they hired a full-size crane to deliver the tiny little ferris wheel. Portland is kooky that way!

Last year, someone planted a marijuana plant in the spot in April, in celebration of 4/20. The city removed it, of course. The Parks Department issued a press release explaining that these sorts of shenanigans happen regularly in the park. “Mill Ends Park, the world’s smallest, attracts a lot of…let’s call them community-supplied enhancements,” the release said.

If you visit, be prepared for the fact that the park is really on a small median in the middle of a four-lane artery in the heart of Portland. So cars will be zipping past on either side.

I have this fantasy of packing a full picnic basket and laying out a blanket and having an actual picnic there. I think that would be so funny! If anyone does this, please send me the Instagram pics!

And don’t forget while you’re in Portland to check out the Hawthorne District, Mount Tabor Park, and hotspots like Powell’s Books and Voodoo Doughnut. 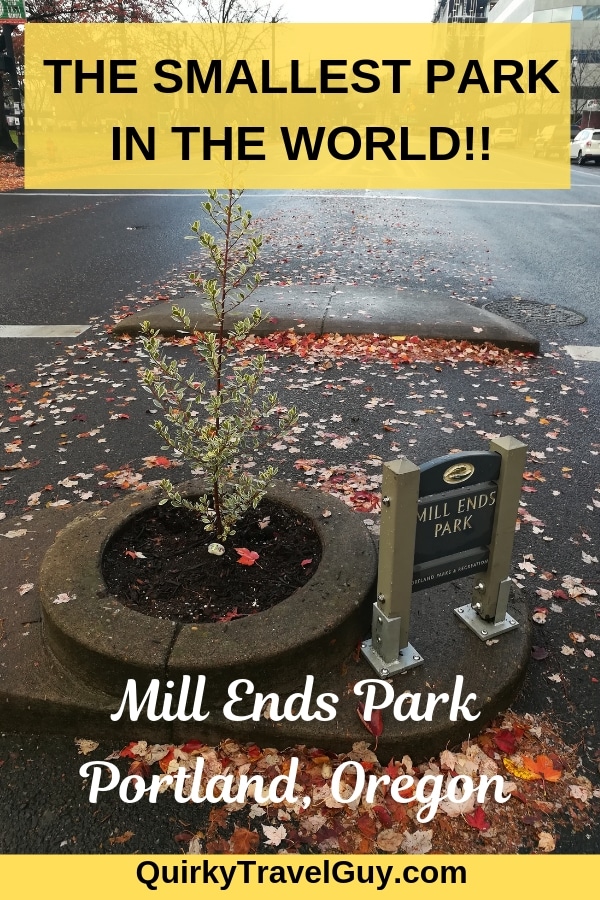