What do you do when you have 24 hours in Milwaukee? That was my situation on a recent visit to the city. I wanted to do a few “touristy” things and then hit up a few local spots. Here’s how I spent my day!

My first stop was the cliche Wisconsin entity – a cheese store! I had heard that cheese curds were the thing to try, but the place I visited only sold frozen cheese curds. Boo – I had assumed they would be fried and ready to eat, like french fries. Oh well. But I did get some ridiculous photos in cheese garb. 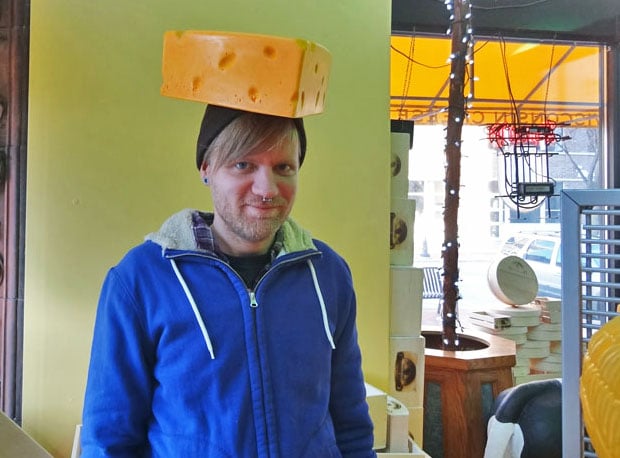 Next it was off for a swing through downtown and the Milwaukee Art Museum. You have to stop by here even if you’re not going inside, because the exterior is so damn cool looking: 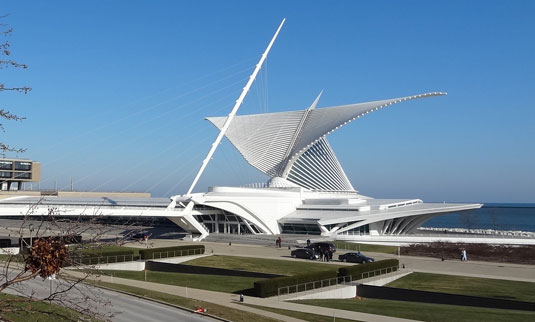 Then I wandered past some unusual art, like this weird orange thing. It took me awhile to figure out the name of this piece, because Google searches for “Milwaukee orange spiky art museum thing” didn’t yield satisfactory results. Turns out it’s a sunburst sculpture called ‘The Calling’ by Mark di Suvero, and it was created in 1981. 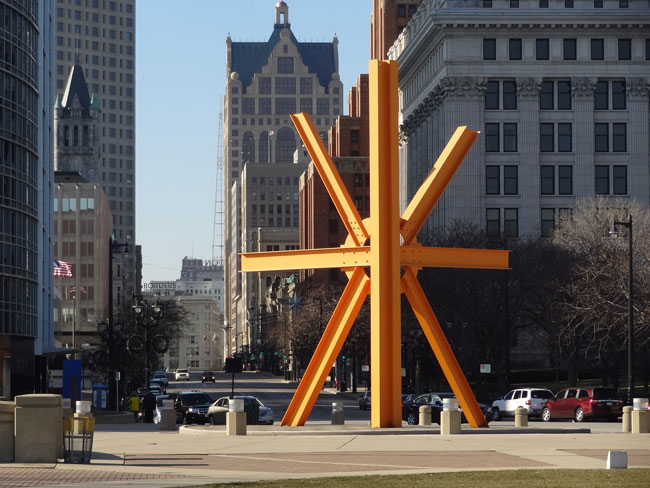 Day Trip to Milwaukee: Afternoon at the Riverwalk and Interesting Museums

The Riverwalk is a cool area to check out. I had to swing by the Bronze Fonz for a photo with a statue of Henry Winkler’s bronze statue from Happy Days. Don’t tell me you wouldn’t stop for a photo too! 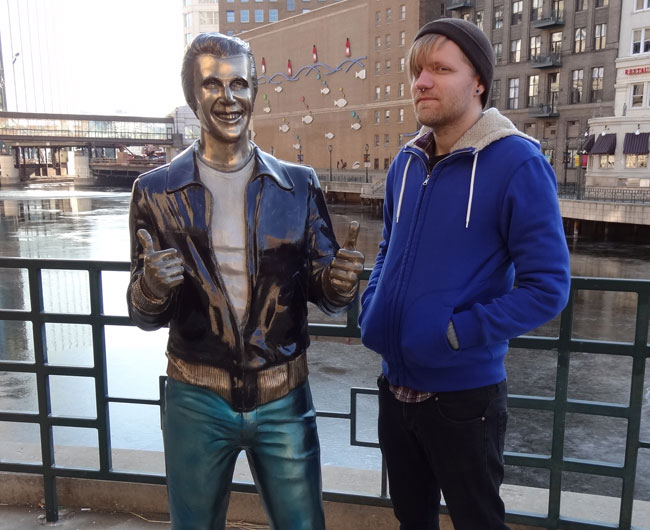 The river was frozen! There were no kayakers on this day… 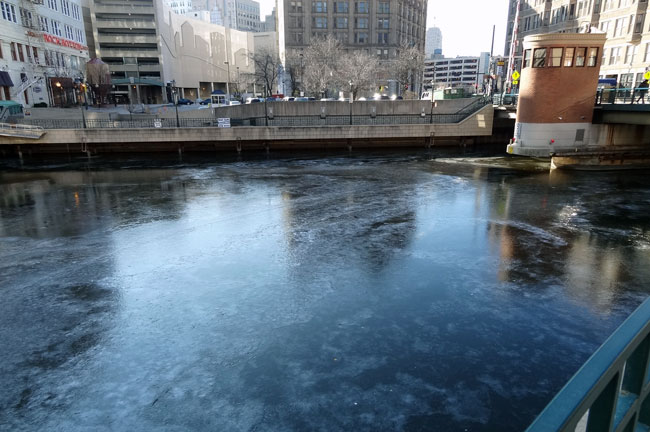 I made a stop at the Milwaukee Public Museum, where I saw loads of butterflies, giant cockroaches, and a humpback whale skeleton. And then it was off to the final museum on my wishlist, the Harley Davidson Museum. Even though I’m not a big motorcycle guy, I enjoyed seeing the Harleys from the past century.

Milwaukee is known for having a lot of beer brewery tours, but it wasn’t feasible to check out an actual brewery tour on a late Sunday afternoon, so instead I headed to the Pabst Mansion. The signpost tells the story of German-born Captain Frederick Pabst, who joined his father in law’s brewery after moving to Milwaukee and helped turn it into the world’s largest brewery.

The captain lived in this mansion, which sits just near Marquette University, back in the 1890s. I didn’t take the mansion tour, because photography is not allowed inside, and I won’t patronize any institution which bans photography. There’s no good reason for such a ban, so I’m taking a stand. These places will not get my money until they wise up! 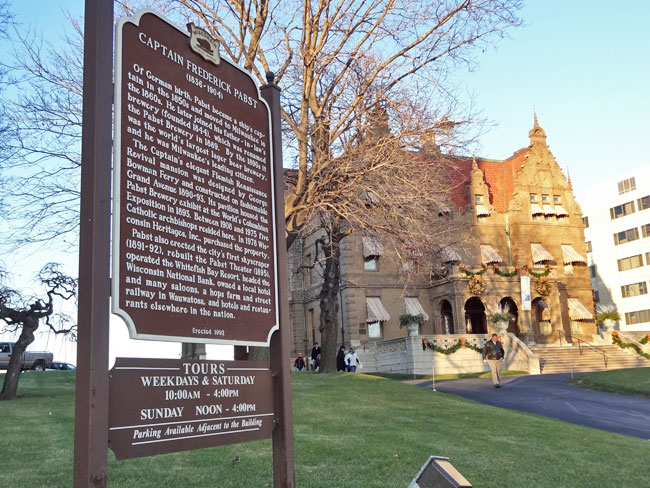 I’m an ice cream and dessert fiend, so next it was off to Leon’s Frozen Custard, an old-time food stand where you order from a window and eat in your car. I ended up getting a caramel flavored milkshake, because I’ve never seen such a thing. It was really tasty, although I have to wonder why Leon’s has virtually no hot foods. I know they like to be old-fashioned, but all they offer is hot dogs and sloppy joes. They can’t even be bothered with french fries? 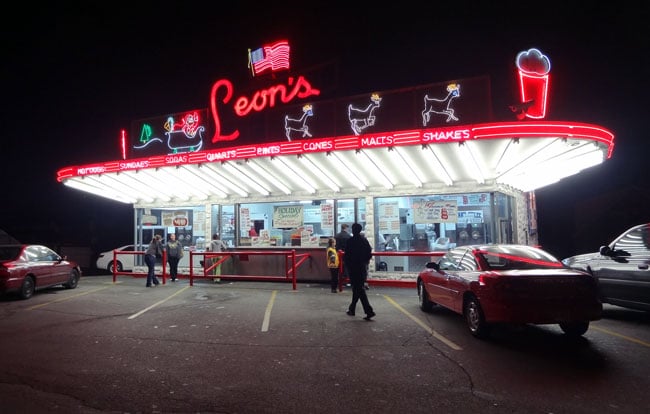 I had planned to swing by Miller Park to grab some quick pics of the statues outside the stadium for a future installment of the Sports Statues Photo Teaser guessing game, but sadly I ran out of time. Next time!

Finally, I had to end up at a dive bar. Some online research revealed that Blackbird in the Bayview neighborhood would be the place for me, and it sure was. If I had to design my own dive bar, it would pretty much be exactly like Blackbird. A couple tvs at the bar, vinyl booths throughout, interesting art on the walls, and pinball machines and board games for patrons to play. Board games! 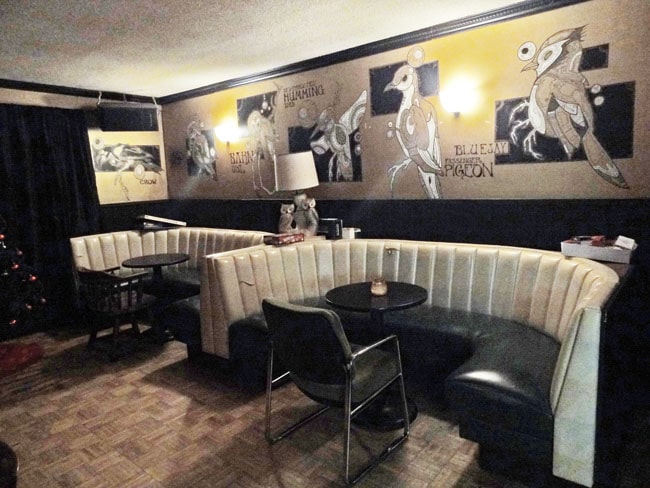 Milwaukee had some of the same charm that Pittsburgh does – it’s sort of like a city that feels more like a small town. A nice place to spend time when I want to get away from the craziness of Chicago.

I will be back, Milwaukee.

How would you spend 24 hours in Milwaukee, Wisconsin?

8 thoughts on “How I Spent 24 Hours in Milwaukee: Cheese Stores, Dive Bars and Pabst Mansions”