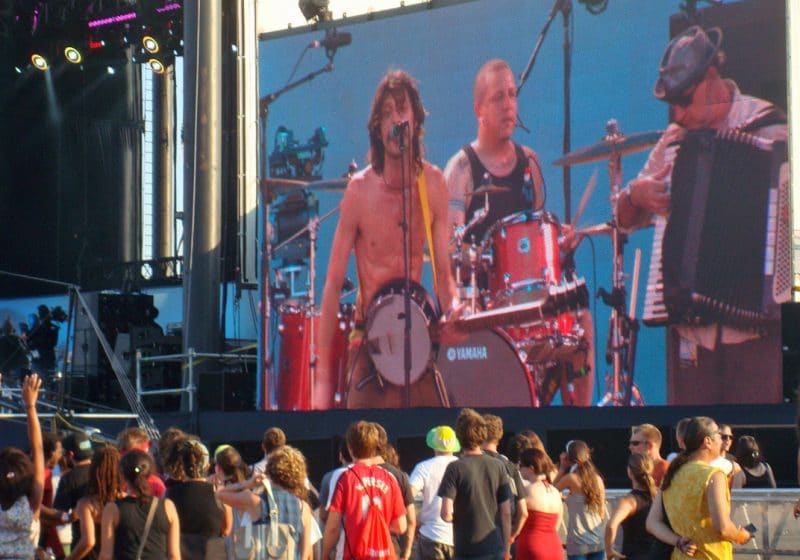 New York City is where I became a concert junkie. No city in the U.S. hosts more great concerts than NYC, so the list of outstanding concert venues is almost endless.

Everyone who attends shows in New York has a personal list of the best places to see a concert. This is my totally subjective list, based largely on personal memories associated with the venues.

I first wrote this list several years ago, yet all five of my choices are still in existence. That’s rare, since so many music venues come and go. Here’s a personal retrospective of the best music venues in NYC, with my own concert memories.

I’m only just now getting over the breakup of Danish pop duo Junior Senior, whose split was a tragic development for anyone interested in shaking his or her coconuts. But at least I have the memories of seeing them at the Mercury Lounge in 2007.

This dive on Houston Street actually isn’t the nicest or cleanest place in the world. But it only holds 250 people, making it a great place to see some of your favorite acts up close.

Pretty much every cool indie band in the world plays the Music Hall of Williamsburg. It’s one of the most popular music venues in NYC, and it’s situated in the city’s hipster capital.

The venue’s upcoming schedule features acts ranging from acclaimed newcomers, like Tones and I and Beach Bunny, to acts who have been around a while and built up a decent fan base, like Nada Surf and Mayer Hawthorne, to veteran acts with hardcore crowds, like Juliana Hatfield and the Dandy Warhols.

The Bowery is cozy, with a capacity of less than 1000. It’s relatively clean and well-maintained. And it was the site of one of my favorite concert memories – seeing Coldplay in an intimate venue just before they exploded with the “A Rush of Blood to the Head” album. We shared a luxury box with the Gallaghers from Oasis, while Gwyneth Paltrow sat across the room in another box.

Those shows were nearly 20 years ago. But the Bowery is a concert venue that still holds up in 2020 as one of the best in the city. In fact, Rolling Stone ranked it as the #1 small rock club in America!

The Hammerstein is a little bigger, holding up to 2500 people. For some reason, I ended up here a lot during my college summer internship in NYC. I caught shows by Jimmy Eat World, Our Lady Peace, the Hives, and Doves.

I love the elegant design, with the hand-painted ceiling, the balconies along the sides and the general admission floor. This 34th Street location is one of the few concert venues in New York that is an actual architectural attraction, in addition to hosting cool shows.

I know, it’s not cool to like huge arenas. You’re supposed to talk about how you only love tiny, crowded clubs. But Madison Square Garden is one of the premiere arenas in the nation and gets shows that venues in other cities often don’t get. I still regret not buying tickets to Michael Jackson’s 2003 anniversary shows, which ended up being his last in America. Seeing MJ live is one bucket list item I’ll never get to complete.

MSG also has a smaller theater that holds about 5000. Seeing Radiohead there in 2006 was one of my favorite concert moments ever.

I’m aware that my list is missing a lot of great concert halls, but for me, these five venues are the ones that come to mind first. Other solid live music venues in New York include Terminal 5, Apollo Theatre, Radio City Music Hall, Elsewhere, the Bitter End, and Joe’s Pub.

For more music stuff, check out my guides to the annual Bonnaroo and Lollapalooza festivals.

What are your favorite live music venues in NYC?

7 thoughts on “The Best Music Venues in NYC: My Personal List of Favorites”