While you’re in New Orleans partying on Bourbon Street, walking past the colorful houses of Marigny Bywater, and bopping around town on the streetcars, don’t forget to check out the city’s best historic attraction: The World War II Museum, a sobering look at the great conflict that changed the world and took more than 50 million lives, making it the deadliest war in human history. 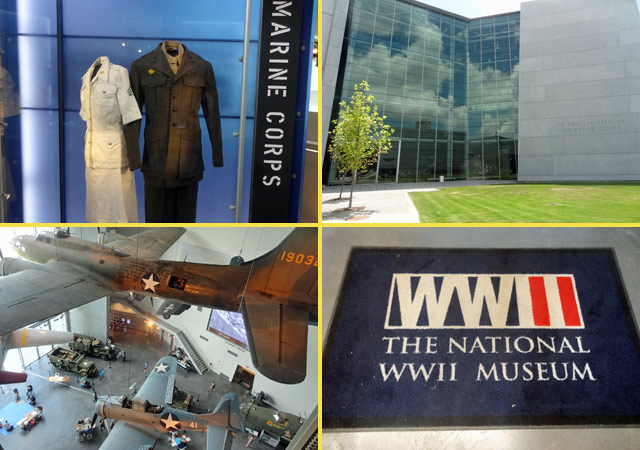 The museum captures that history with artifacts, educational displays, and actual planes and military vehicles from the conflict.

The WWII Museum is actually an entire campus with several buildings that serve different purposes. The highlight for me was “Beyond All Boundaries,” a video documentary of the war narrated by Tom Hanks.

The 30-minute vid included first-hand accounts of life in the trenches, old photos, and special effects. At the showing I attended, the audience included a couple of WWII veterans, which really brought the whole thing close to home.

The film is not included with regular museum admission, but tickets can be purchased for an extra $7. You absolutely must spend the extra few bucks to see this riveting film! I wasn’t allowed to take any pics during the video, but you can get a peek at its trailer:

Next it was onto the Freedom Pavilion, which featured war aircraft hanging from the ceiling, tanks on the ground floor, and other exhibits throughout its multiple floors. 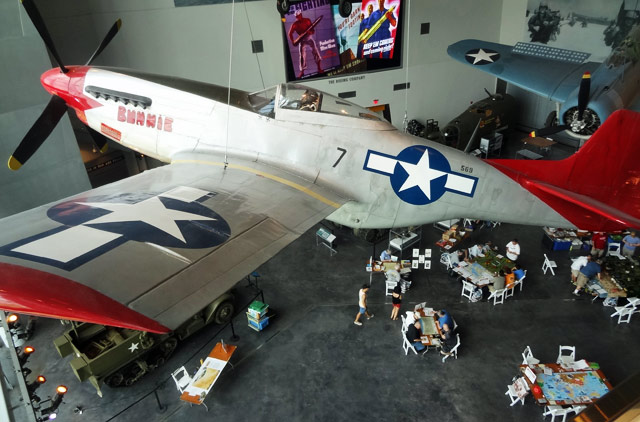 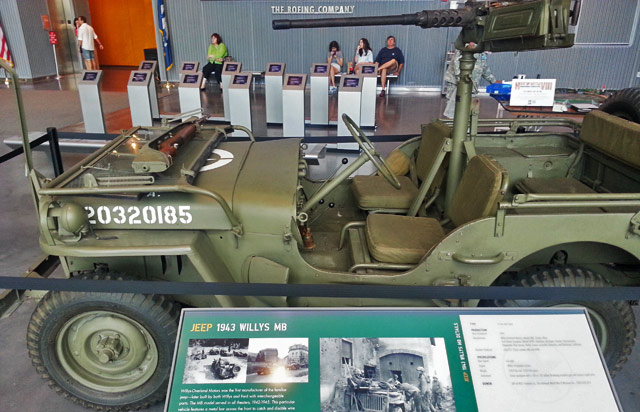 I thought this was a cool artifact. It’s a “combat pigeon loft.” Many countries on the Axis and Allied sides used carrier pigeons to send messages between units. This was a vehicle used to house pigeons until an urgent message needed to be sent, at which point a note would be attached to the bird and it would be released to fly home. 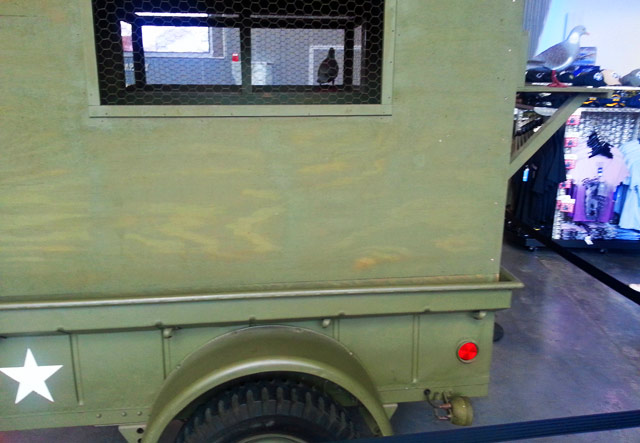 Other sights from the World War II Museum included visual displays of troop arrangements, world maps showing which countries got involved, and an “Entertainers Hallway” that explained how Hollywood actors supported the war effort in the 1940s. 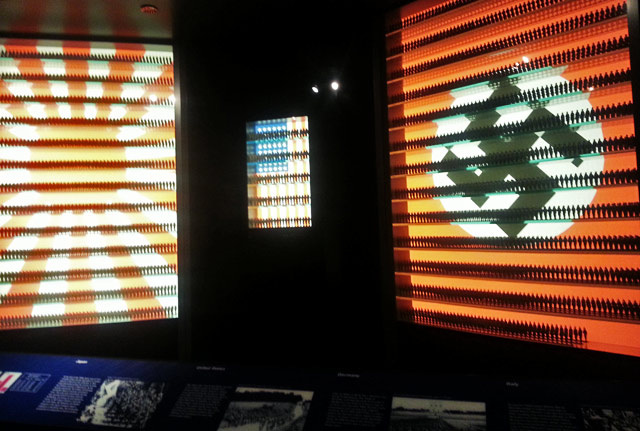 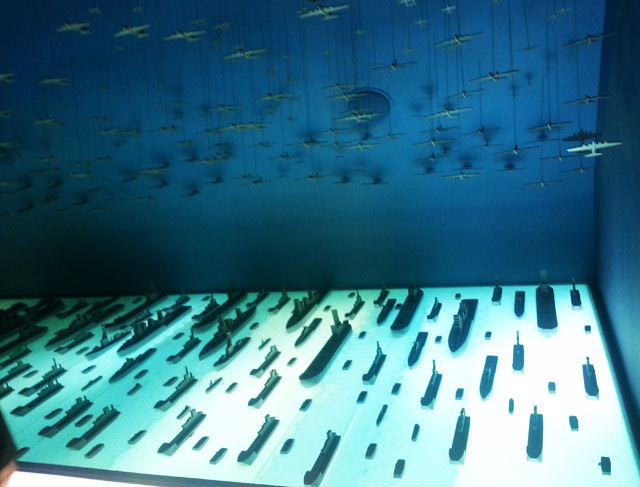 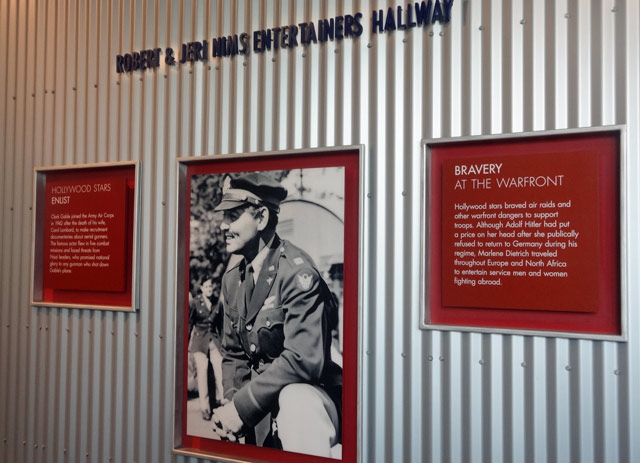 Want to buy your commemorative war merchandise? Head to the gift shop for some “We can do it!” memorabilia. 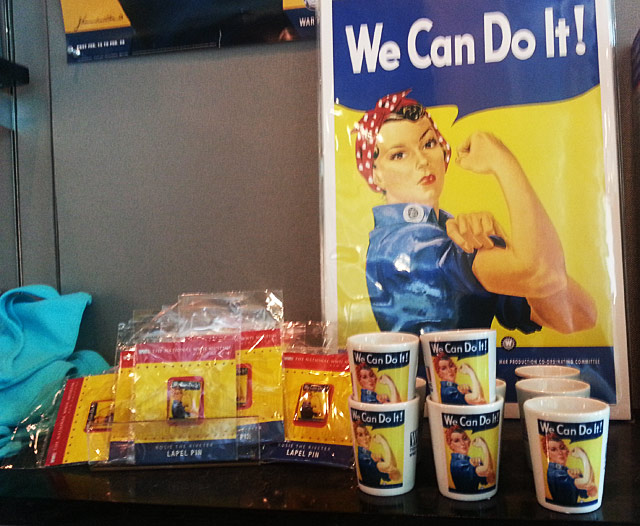 Some of the more fascinating pieces of history can be found outside the museum. Here’s one of two “Atlantic Wall fragments.” These were concrete slabs (reinforced with steel!) on the coast of Germany that were part of Hitler’s massive system of defense.

The Germans used 17 million cubic yards of concrete in setting up these walls and bunkers on their coast to try to keep tanks out. The holes and scars on the wall came from the thousands of bullets fired by American soldiers at Utah Beach on D-Day. 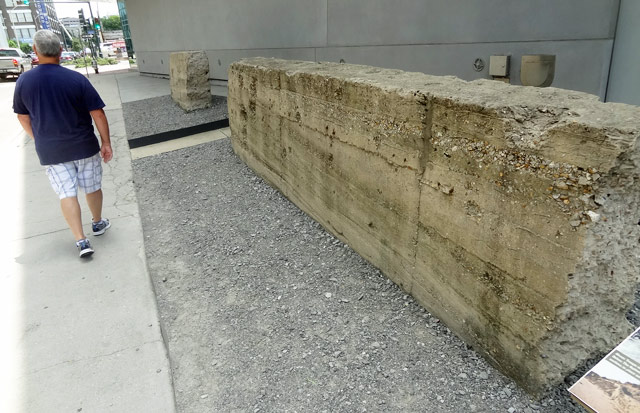 Another glimpse behind enemy lines can be gathered by looking at the German air raid shelters. These were placed throughout German industrial communities that might be the target of bombing attacks.

Constructed from 5 tons of concrete each, these above-ground shelters were actually more effective than underground bunkers. 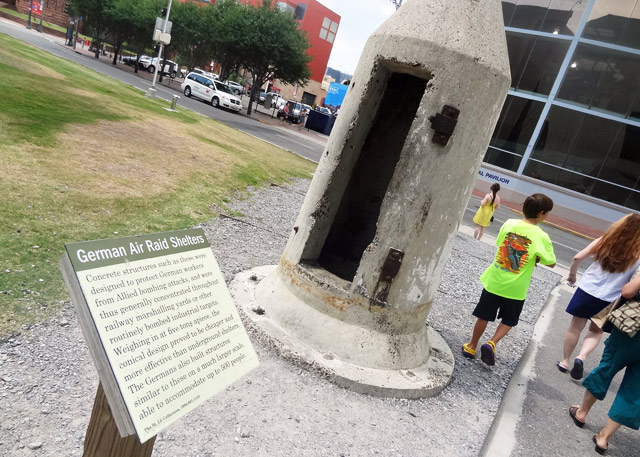 You can stand inside the shelters and peer out the tiny window to get the experience of what standing inside one was really like. 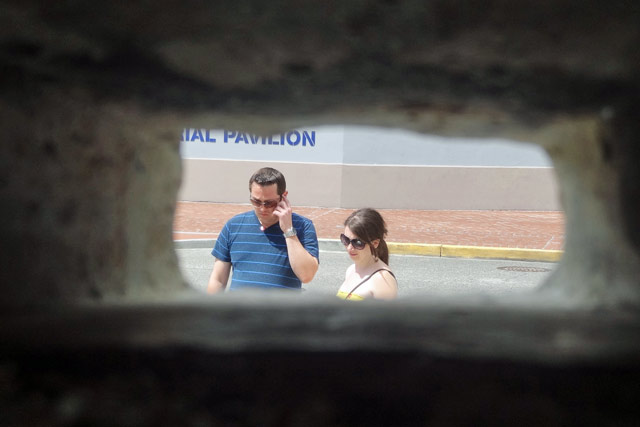 The World War II Museum is still growing as new exhibits and programs are added to the existing buildings that aren’t yet filled to capacity. The museum was created in the year 2000, so it’s modern and new as museums go.

As of 2020, the cost of a ticket to the World War II Museum in New Orleans is $28.50 for adults and $18 for students and military. WWII vets receive free admission. The Beyond All Boundaries documentary video is an extra $7. There’s a paid parking garage on site.

We’re not currently aware of any National World War II Museum coupons or discounts, but if we come across any, they will be added to this article.

You can always check out the outdoor artifacts (the Atlantic Wall fragments and air raid shelters) for free, since they’re just sitting on the lawn, totally open to the public.

I recommend making a detour during your New Orleans visit to relive a crucial part of American history at the WWII Museum! For more fun in the city, check out these quirky and fun things to do in New Orleans, Mardi Gras World, the Marigny and Bywater neighborhoods, and this one day in New Orleans itinerary.