While visiting a friend in North Carolina, I had to stop in to a real BBQ restaurant to experience authentic southern BBQ. We drove through Raleigh and ended up at The Pit, a restaurant with overwhelmingly positive reviews on Yelp.

This place was apparently featured on the Travel Channel. Their claim to fame is that they slow roast the entire hog until the meat is falling apart, and then they serve it to their customers. 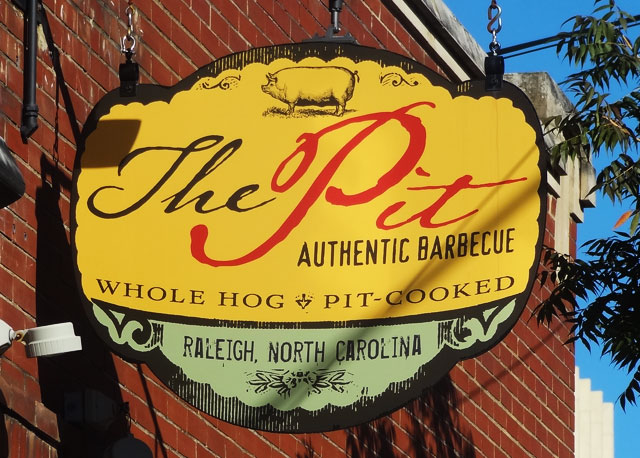 Now, I’m no barbecue aficionado or culinary expert. But when I think of BBQ, I think of something that looks like this, which I got in Kansas City:

Instead, the pulled pork we received at The Pit in Raleigh looked like this: 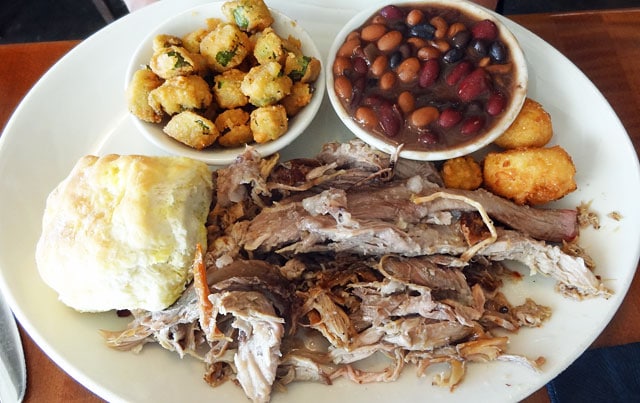 I sat there dumbfounded. No sauce whatsoever! Evidently that’s a thing down here. I suppose it makes sense on some level – you want to highlight the meat and not drown with other flavors.

But I was taken aback because I’ve certainly never ordered BBQ and received a platter of boring, dry meat. That just proves that different places do barbecue in completely different ways!

I gave the plain pork a shot, but it wasn’t tasty enough on its own, so I ended up having to add my own sauce anyway. Talk about a weird feeling. Here I was at an upscale BBQ establishment, with a beautiful plate of pit-roasted meat, and all of the flavor in my dinner came from the jar of BBQ sauce on the table. That’s just strange.

The Pit was the only North Carolina BBQ place I visited, so I won’t write off the entire state’s BBQ industry based on one questionable experience. However, it’s telling that the Pit was one of the only places I could find that was open on a Sunday. This being the south, most other BBQ joints were closed on the holy day.

I’ll give North Carolina BBQ another try the next time I’m back in the state – provided it’s on a weekday.

If you’re in the area, consider checking out other North Carolina attractions, such as the Smoky Mountains, the Andy & Opie statue, Greensboro activities, New Bern activities, the birthplace of Pepsi, and Croatan National Forest. Also check out quirky attractions like the Ava Gardner Museum and the ACC Hall of Champions.

Which kind of barbecue do you prefer?