Note: This review of the Penn Museum is a few years old by now. Hopefully, they’ve updated things and improved the place. Feel free to leave a comment to let us know if anything has changed! 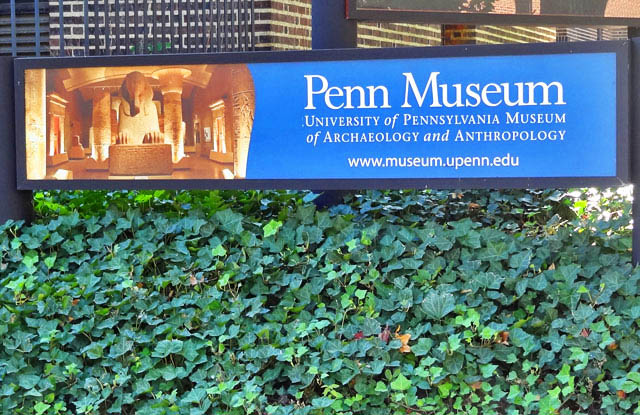 It occurs to me that I’ve been giving everything positive reviews lately. From the San Diego Maritime Museum to Philadelphia Magic Gardens to the fabulous Ava Gardner Museum, it’s been one big lovefest around here.

The upbeat tone of my recent posts is a good thing – it means I’m visiting some cool spots. But I can’t keep the critical side bottled up forever. Thankfully, the pathetic Penn Museum of Archaeology and Anthropology in Philadelphia gives me a chance to put something on blast for the first time in a long time. 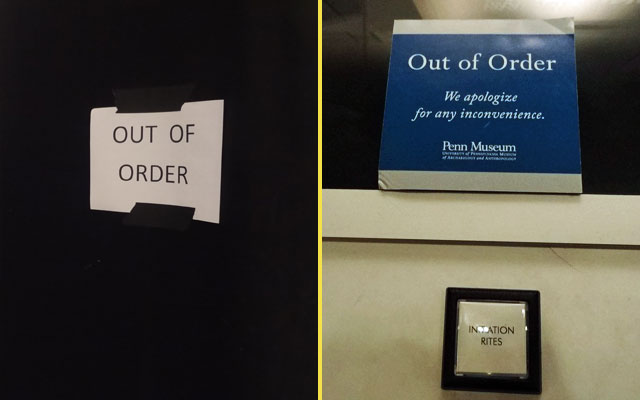 The Penn Museum is on the campus of the University of Pennsylvania, which is an Ivy League school. So this place has a lot to live up to. But it doesn’t come close. The displays are laughably outdated.

Most of the maps and photos look like they came from the ‘70s and ‘80s. This is the kind of museum that was probably cool in 1985, but it sadly hasn’t updated the majority of its exhibits since then.

There aren’t as many really old artifacts here as you’d expect, considering this is supposed to be an archaeology museum. In many cases, the museum doesn’t even have original pieces, so it substitutes plasters or re-creations for the real thing.

An Ivy League Museum shouldn’t have to settled for facsimile pieces. 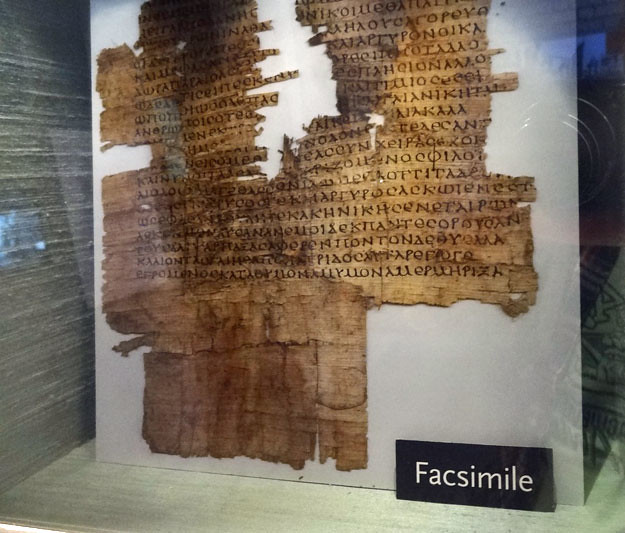 There were very few visitors the day I visited, which wasn’t surprising given the lack of quality here. Many sections were closed, and artifacts were missing or temporarily removed.

I love this photo, because it totally sums up my Penn Museum experience. Three pieces, and two of them are missing and/or under repair: 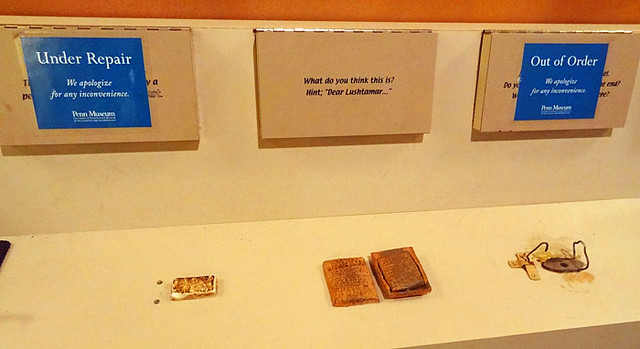 The Penn Museum is the neediest museum I’ve ever encountered. This facility has a desperate desire for validation and feedback. It’s hilarious that just about every exhibit has some sort of request for user feedback, either in the form of a computer survey or a white board where users can write their own questions.

Can’t I just look at the exhibits without being hassled by the museum equivalent of telemarketing? 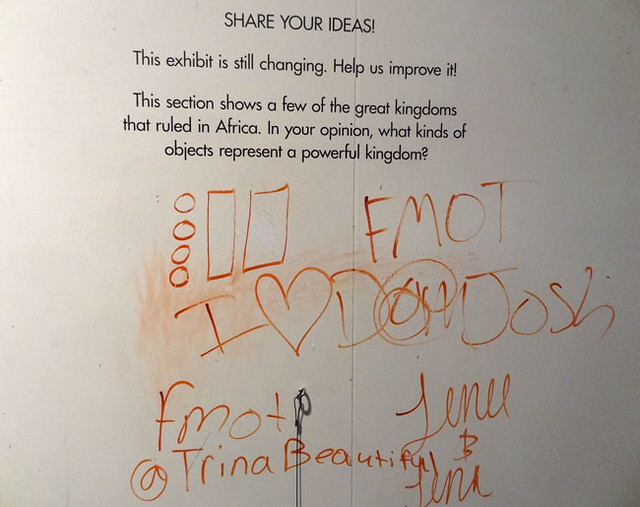 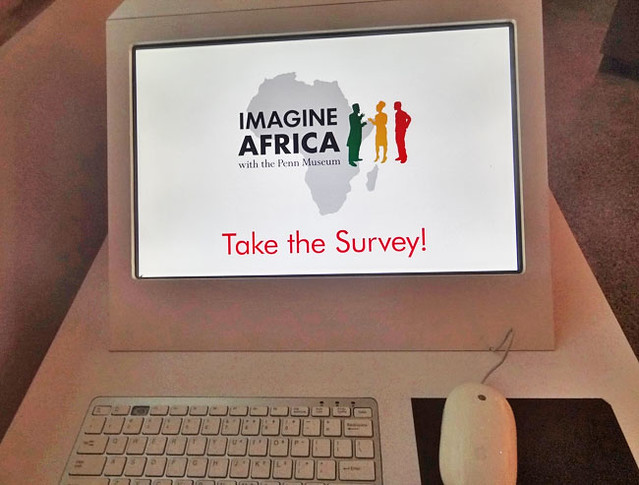 And just in case you’re too shy to write on the white board, the museum offers plain sheets of papers to write down your thoughts. Please talk to us! 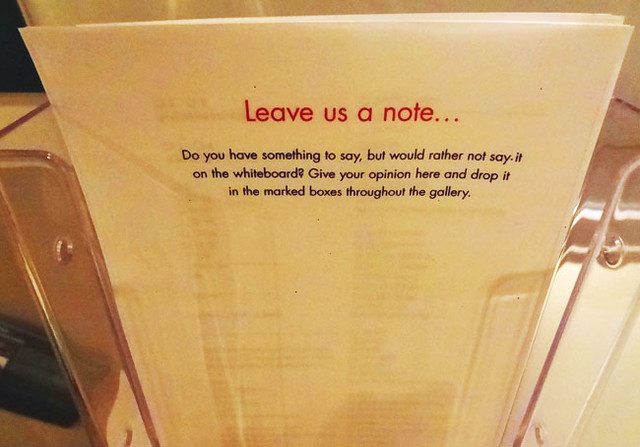 As you might expect, one of the computer surveys requesting feedback was vandalized with numerous inappropriate comments. At least this was good for a laugh. 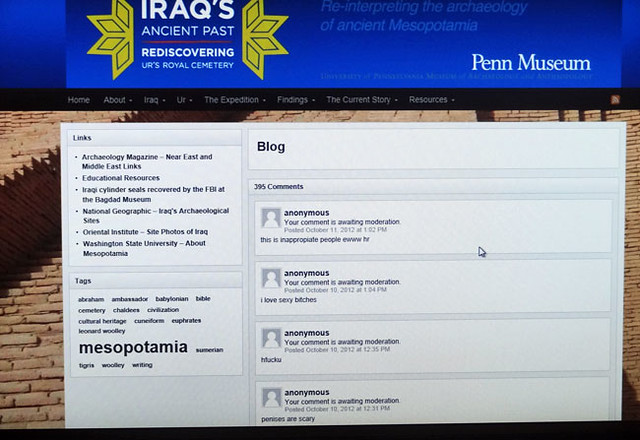 I imagine these are attempts to be “interactive,” but they fail badly. Archaeology is difficult to make interactive, and if you really want to do it, you should probably install more video displays and touch-screen games (not surveys) that visitors can play to supplement the artifact displays. White boards are not the answer, people.

There’s one interactive exhibit that does seem cool – it’s a station where users can create their own African-themed designs on paper using colored animal stamps. But when I visited, the ink pads were dry, rendering them useless.

The museum folks even post signs tooting their own horn, showing off how much visitors learn from the place. I have never seen a museum put up posters that say, in essence, “Look how much people enjoy these wonderful exhibits!”

I cannot imagine what would possess anybody to think putting up these signs is a good idea. Somebody at this museum has a bizarre obsession with bar graphs. 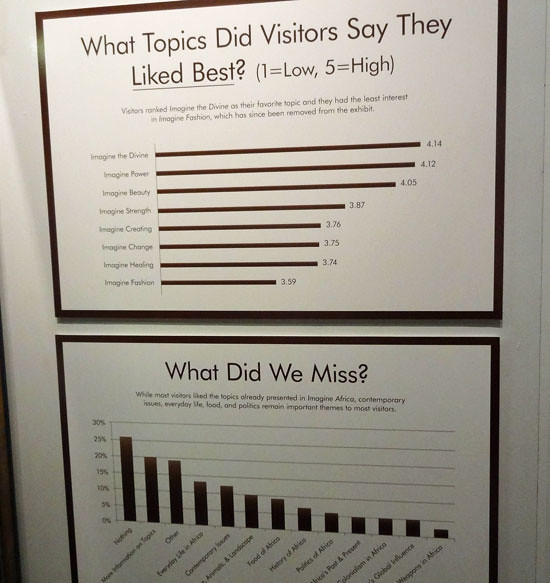 Shockingly, the Yelp reviews for this museum are great, which makes me wonder what planet those people are living on. Many commenters mentioned the Egyptian room as one of the highlights. Would they be referring to this huge mummy room that’s 75% empty? 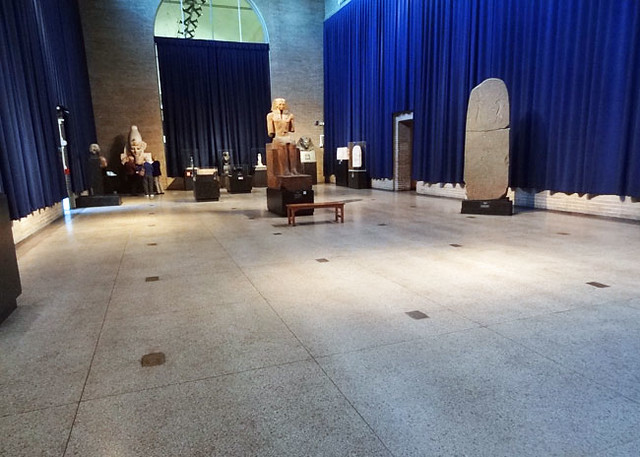 From the absurd feedback requests to the huge empty spaces to the facsimile pieces to the socializing security guards, this stale holiday fruitcake of a museum is downright embarrassing. Especially considering its Ivy League affiliation.

Seriously, Penn Museum… if you can’t do better than this, you’re better off just calling it a day. You had a nice run. Take pride in your longevity, find somewhere else to donate your few interesting pieces, and shut this sad place down.

9 thoughts on “The Penn Museum of Archaeology is Just Awful”