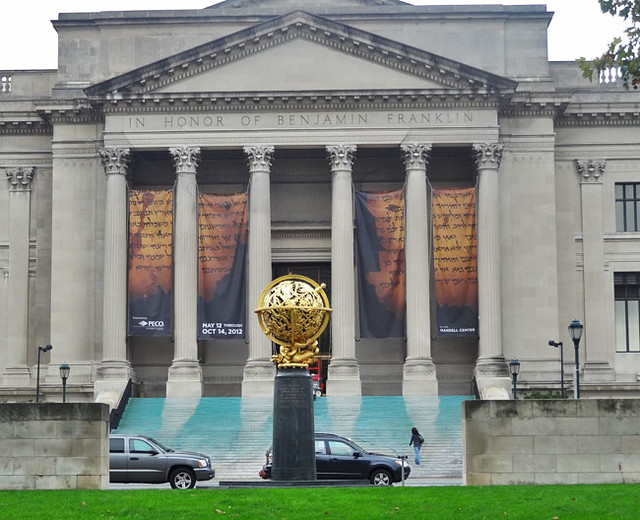 When the founding fathers drafted the Constitution at Independence Hall, I wonder if they could have envisioned me someday riding past that building in a public bus while updating my Facebook status.

Probably not. But that’s the cool thing about Philadelphia. History surrounds you everywhere you go, even when you’re just taking public transit from Point A to Point B. The contrast of the old and new is amazing to witness. Kids playing football in an open field right next to the Liberty Bell. A small shop selling frozen yogurt on the same street where Ben Franklin used to work. Bicyclists zooming past the original U.S. Supreme Court.

The funniest thing about history in Philadelphia is the city’s Ben Franklin fetish. Seriously, the guy’s name and image are everywhere. 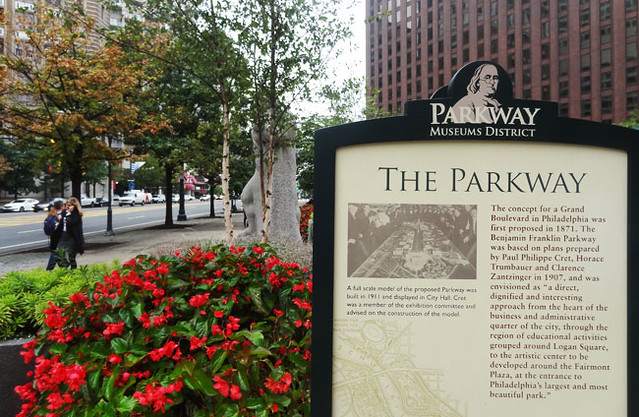 Even the Museum of Art can’t resist paying homage to the man. This marble bust is impressive. It was created in 1779 and Franklin got to see it while he was still alive. 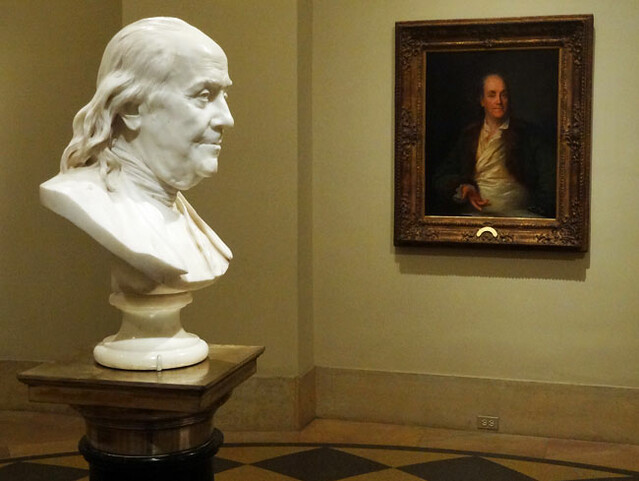 Not that he doesn’t deserve it. “The First American,” the first to understand electricity, and all that. 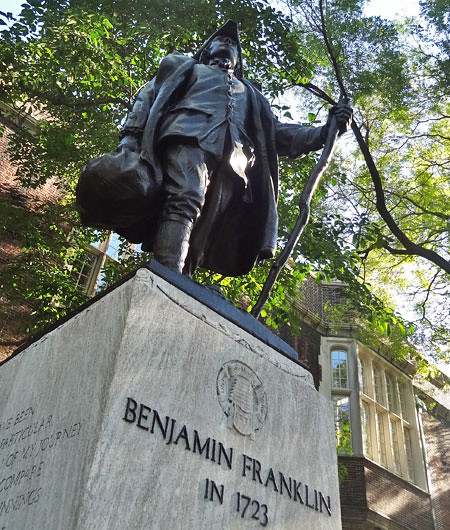 The Ben Franklin Influence in Philadelphia 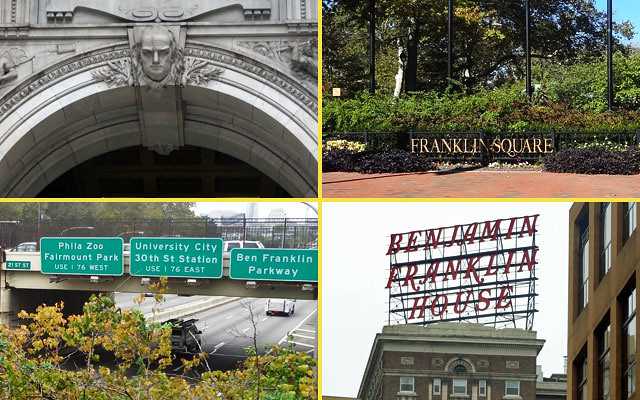 Oh, and that bridge leading across the river to New Jersey? That would be the Benjamin Franklin Bridge, of course. 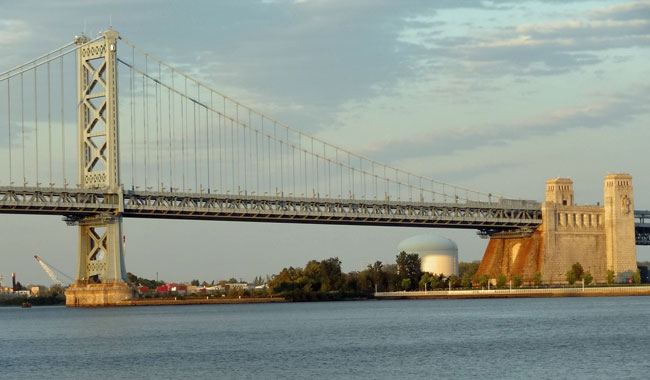 Historic markers are everywhere in Philly, especially in the Old City neighborhood. Some of them really do mark important places in history, such as the former spot where slaves arrived and a groundbreaking gay rights demonstration. 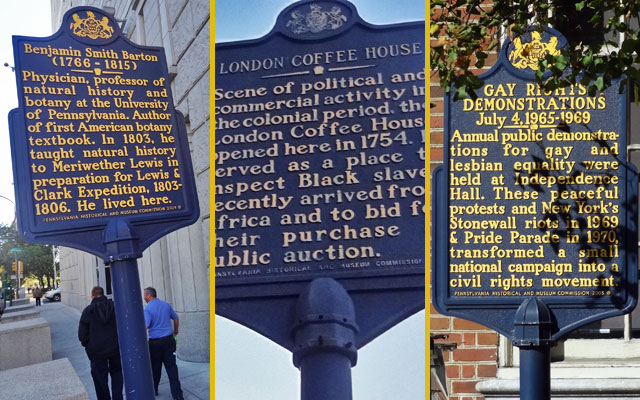 Other markers, though, are really silly. There’s one that marks the spot of birth for Lorenzo Langstroth, who “revolutionized the beekeeping industry with his 1852 patented moveable frame hive…” Seriously? Honeybees?

Come on, Philadelphia, I know you love history, but I’m gonna go out on a limb and say the guy who revolutionized the beekeeping industry isn’t on the same level as the founding fathers! 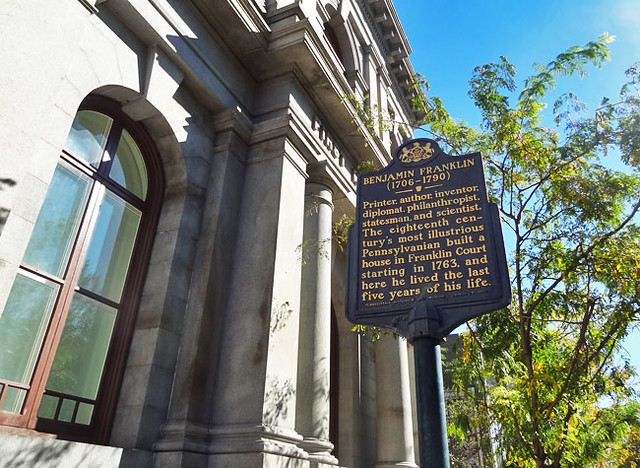 For more of a history lesson, you’ll want to go inside the famous attractions, most of which are free and run by the National Park Service. 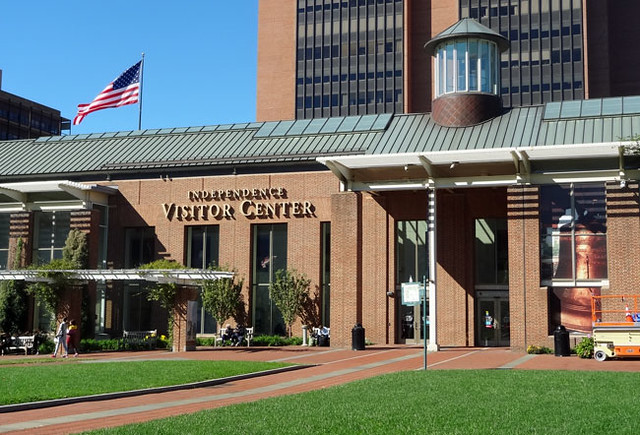 Tickets are not required to see the actual Liberty Bell. Just stand in line (get there early to avoid long waits) and head inside.

The Liberty Bell Center is kind of an odd place, because there’s not much inside the building aside from the Bell itself. And that’s good enough. There’s no need for elaborate displays or other bells and whistles when you have the original Bell and its famous crack right there in plain view. 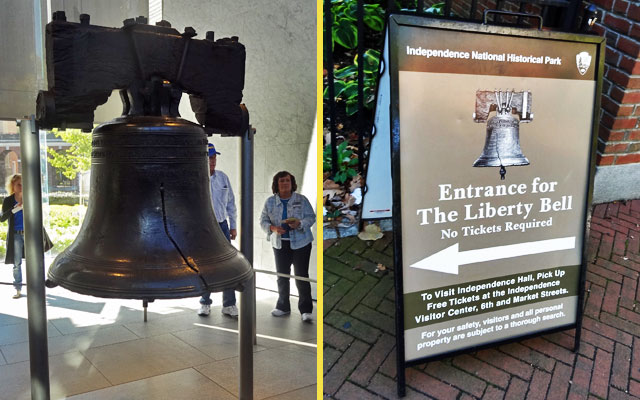 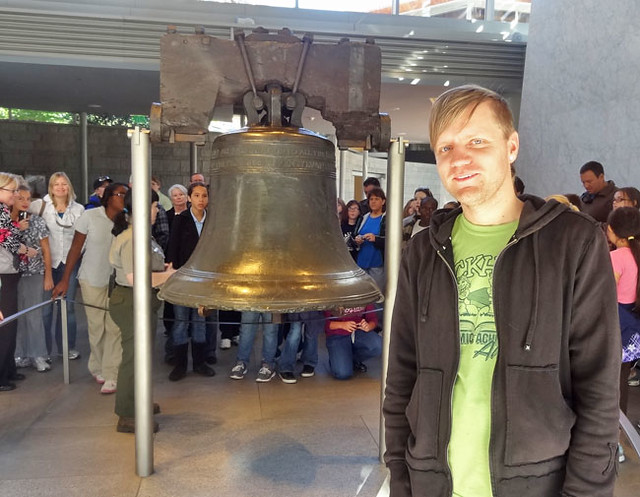 When I was a kid growing in a small county in western PA, our only field trips were to a local radio station and to the zoo. I envy these kids getting to take a field trip to see a real piece of history. 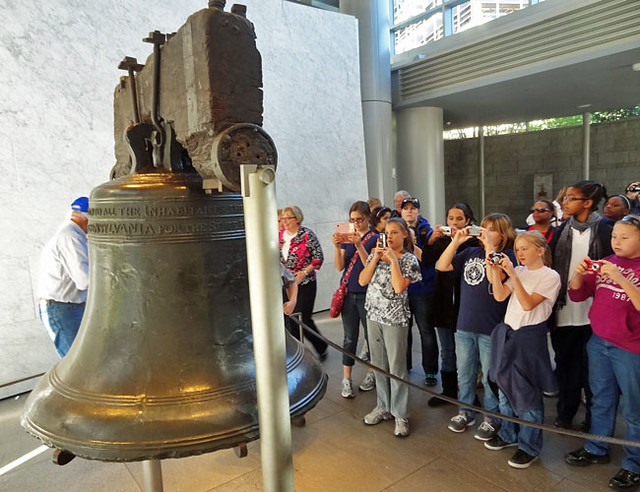 There was even a guy dressed in colonial garb leading Liberty Bell tours. I assume he was supposed to be Ben Franklin, brought back from the dead! 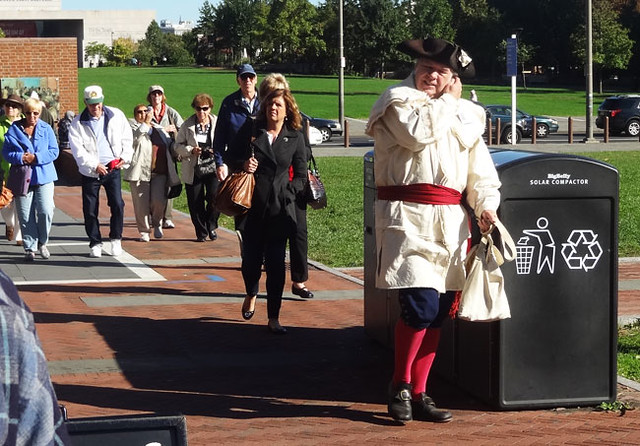 Nearby is Independence Hall, where both the Declaration of Independence and the Constitution were drafted and signed. That’s some serious history. You can tour the inside of the building and see the Assembly Room, where the founding fathers worked. 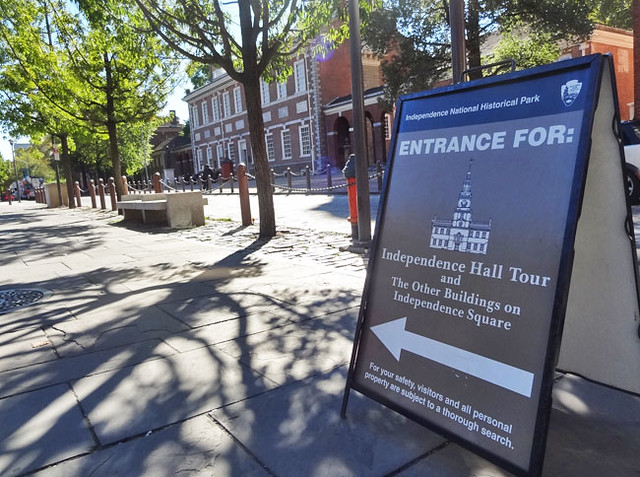 Many of the artifacts in the room are replicas but not originals. They are restored items designed to make the room look as it did in the 1700s. Some of the pieces are originals, though, including a chair used by George Washington and some guy named Ben. That’s the one, right there in the back! 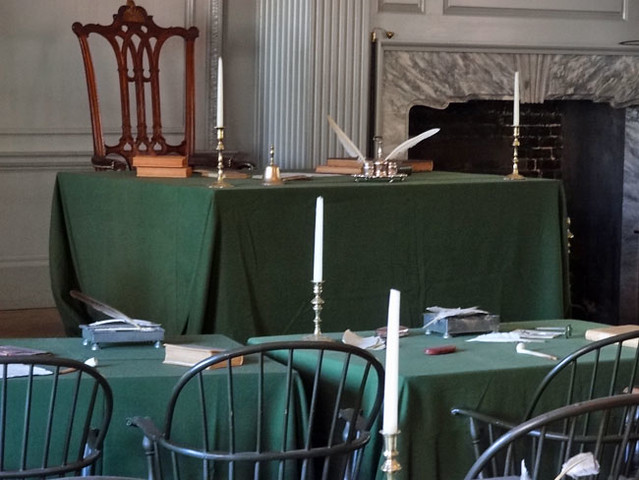 Tours of Independence Hall are free, but you need timed tickets, which can be picked up at the Independence Visitor Center.

Inside, the park rangers will answer all of your questions. Here, a ranger speaks inside the Supreme Court chamber, where the Court worked into the 1790s. 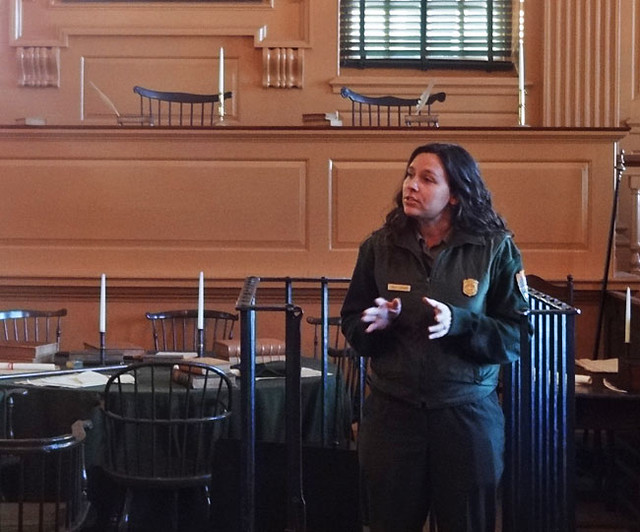 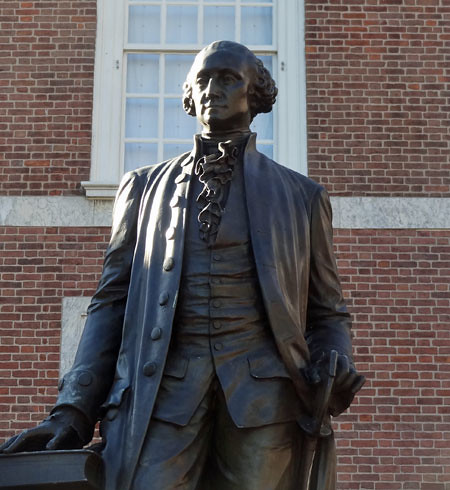 Head on down to Old City Hall to see another spot where the Supreme Court worked. This one only takes a couple of minutes to visit. Step inside and see the benches where Supreme Court justices sat and where observers watched. 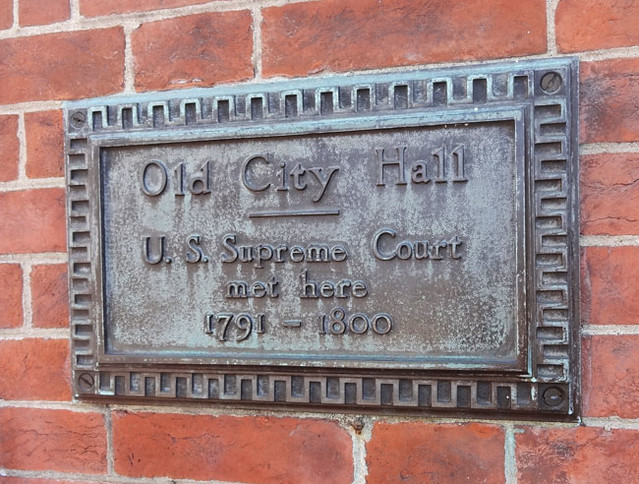 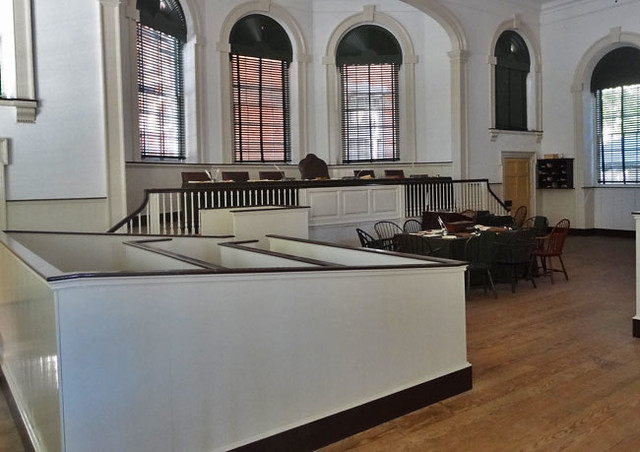 Then there’s Carpenters Hall, where the First Continental Congress met. Among their accomplishments was an agreement to boycott British goods following the British government’s angry response to the Boston Tea Party. 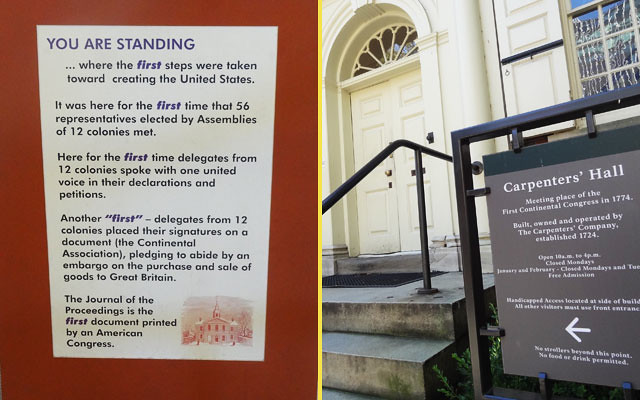 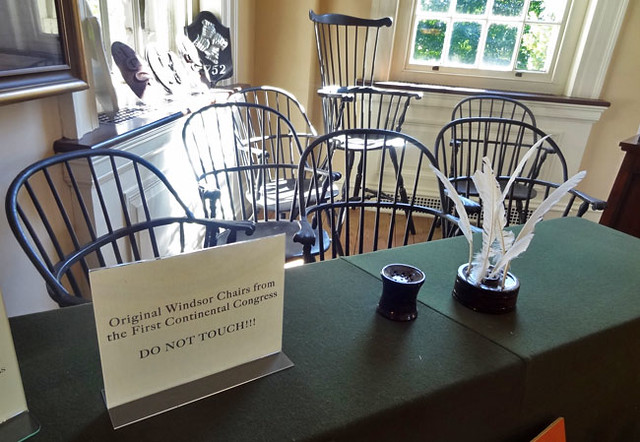 For still more history, you can try the National Constitution Center, an entire museum dedicated to the history of that document. Only one room there allows pictures, but it’s a cool room – it contains life-size statues of every man who signed the Constitution. 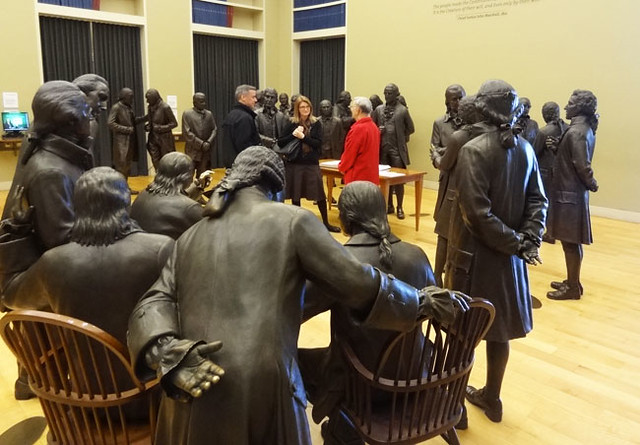 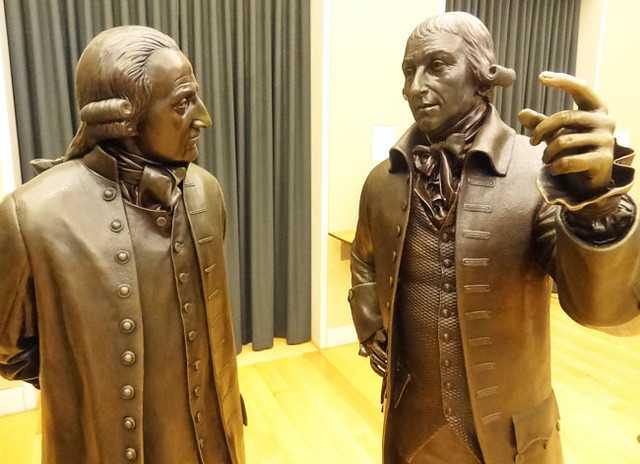 Take a guess who’s front and center among the statues? It’s our dear friend Ben.

Don’t forget to pick up your handy pocket Constitution! 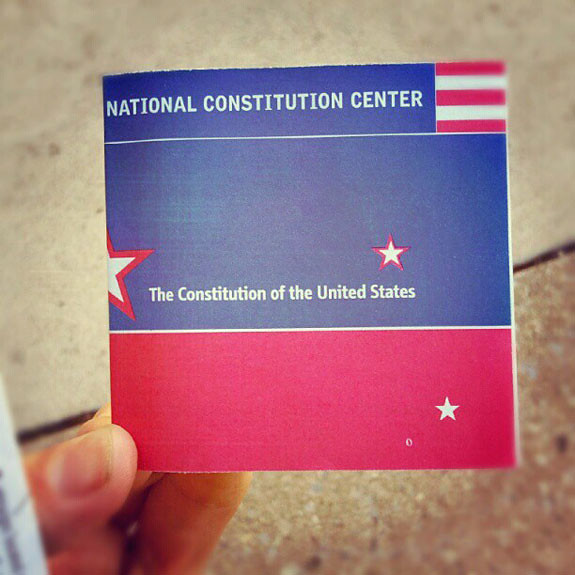 Being surrounded by so much history is a cool feeling. Make some time for these tourist sites when you visit the City of Brotherly Love. You may think that Washington DC has all the historic monuments and statues, but Philly surely gives them a run for their money!

Note: I was a guest of visitphilly.com in Philadelphia.

4 thoughts on “Ben Franklin is Everywhere in Philadelphia: Statues, Monuments, and Historic Sites”