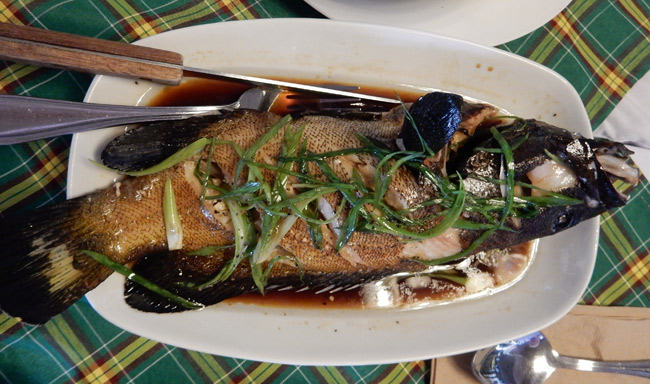 During my week in the Ilocos provinces in the northern part of the Philippines, I found fried street food, soups and stews made from fish and seafood, Filipino chicken intestines on a stick, and the dreamy dessert halo halo, just to name a few local dishes. And I even stopped at the famous fast food joint Jollibee!

While this part of the world is not typically regarded as a culinary mecca, the cuisine was very interesting. Here’s a photographic look at some of the Philippines foods I encountered during a week in the country.

Note that these aren’t all street foods, necessarily. Some of these dishes are best found at sit-down restaurants, and we’ll dive into fast food as well.

There’s no need to waste perfectly good chicken parts, so here in the Philippines, they clean and grill the chicken intestines, then serve them on a stick as “isaw.” Would you be brave enough to try these?

Another fun street food is ukoy. That’s the name for the shrimp fritter. Don’t be alarmed by the eyeballs staring out at you through the fried batter! 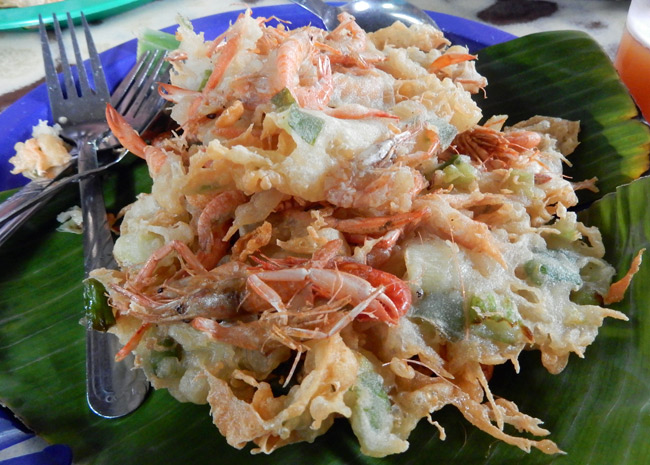 My favorite Filipino street food was the empanada, which is obviously huge in many Latin countries as well. These empanadas were made with sprouts, longganisa (a local chorizo sausage) and a whole egg. They wrap and fry them right in front of you. 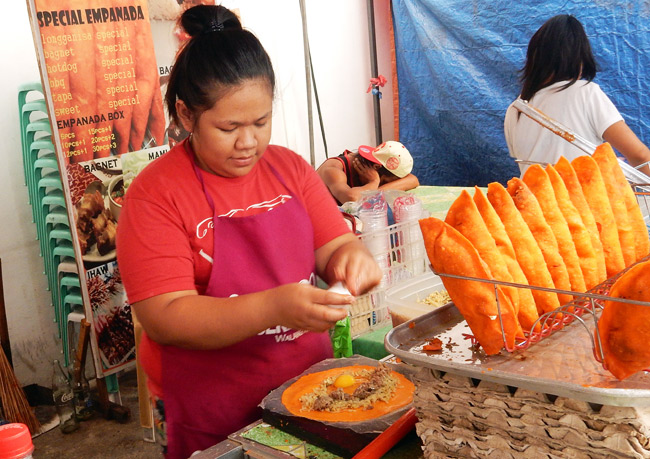 At many roadside stands you can drink from a coconut. Pick one from the table and let the vendor hack it open with a machete! 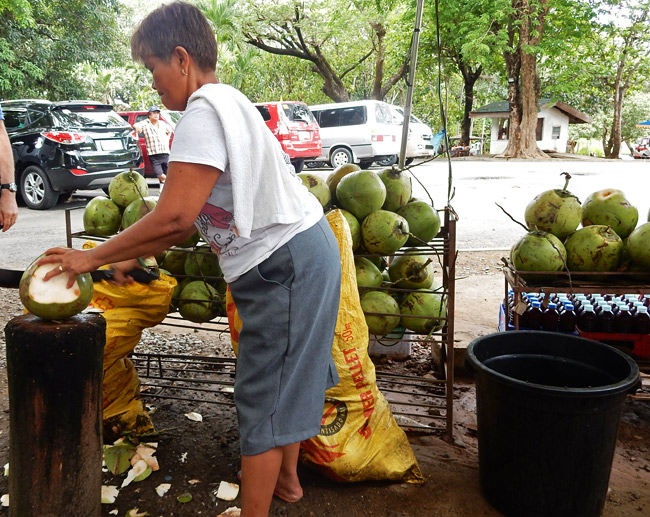 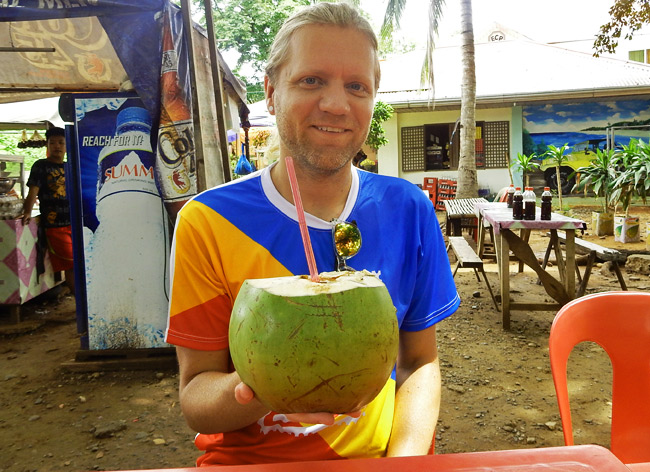 Discovering the Joy of Halo Halo

Ice cream is hands-down my favorite food. Sometimes I eat it for dinner with nothing else. Hearing that one of the most popular Filipino treats is an ice cream dessert called halo halo was very exciting.

The ingredients in halo halo can vary from place to place throughout the Philippines. This version used ube (purple yam) ice cream, jelly candies, beans(!), shaved ice, chunks of tropical fruits, evaporated milk, and other mystery ingredients. The beans were actually sweet and melded nicely into the mix.

The only part I didn’t love was the shaved ice, which had a texture that didn’t quite fit, but everything else was delightful. I’m sure if I lived here, I would discover the perfect combination to customize my own halo halo.

As noted in my description of the city of Vigan, McDonald’s can be found in the Philippines. I had to try the McDo burger, which was essentially a plain hamburger with a mild sauce. Its texture was softer than that of a U.S. McDonald’s burger, almost the consistency of a veggie burger. I was cool with that. 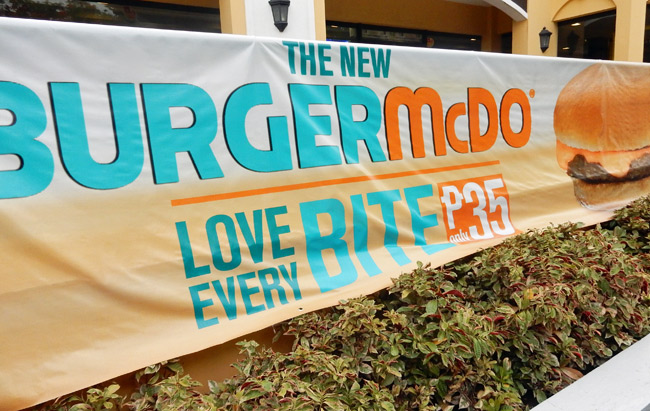 Many of the McDonald’s locations here have a separate booth outside that sells ice cream and frozen desserts. This is a business arrangement I can get behind! 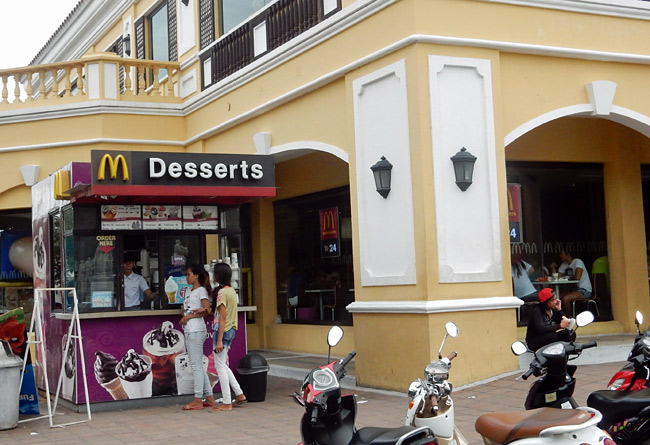 Word is that McDonald’s is not as popular in the Philippines among children, who prefer the local chain Jollibee instead. Jollibee has burgers, but they also specialize in spaghetti and chicken. And they have a cute bumblebee mascot! 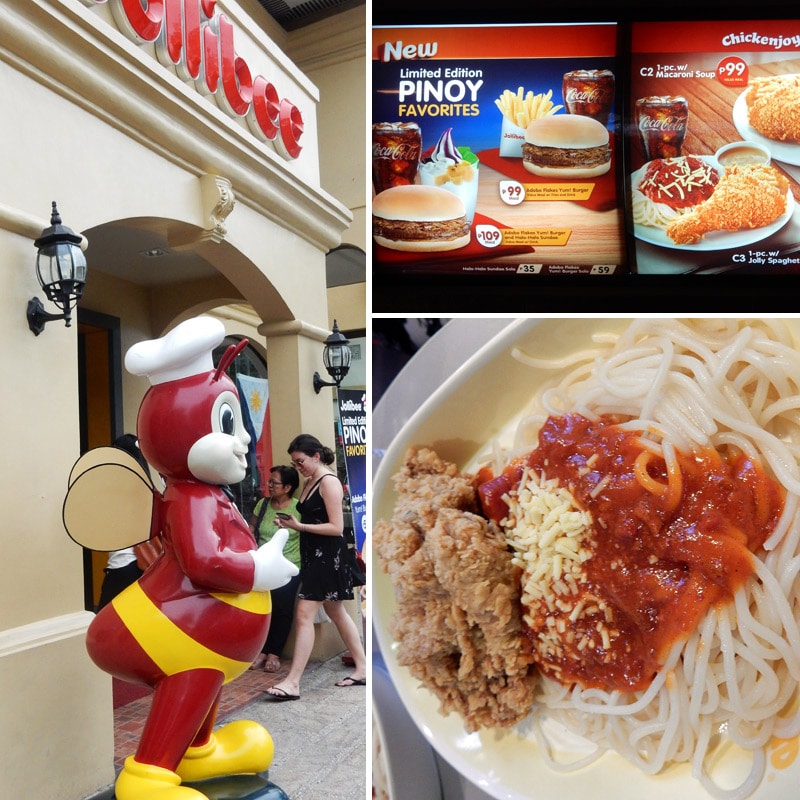 The Jollibee spaghetti was pleasant, with a sauce that had a sweet tomato flavor without all the spicy oregano and garlic that Americans are used to.

I still prefer McDonald’s, but I’m an uncultured American, so what do I know? Now that Jollibee has been rapidly expanding into U.S. markets such as Chicago and Seattle, Americans can try it for themselves and decide whether they like it!

My first Filipino meal included popular dishes like bulalo soup (a beef marrow stew) and adobo (pork stew with garlic and soy sauce.) Also featured were sliced squid and a seasoned whole fish, which were shared by the table. 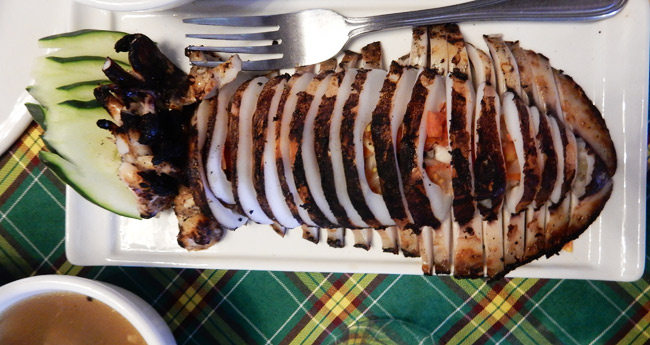 Sinigang is a soup often made with pork. This version used whole fish, eggplant, onion, and string beans. I’m not generally a fan of fish soups, but this one had a very tasty broth: 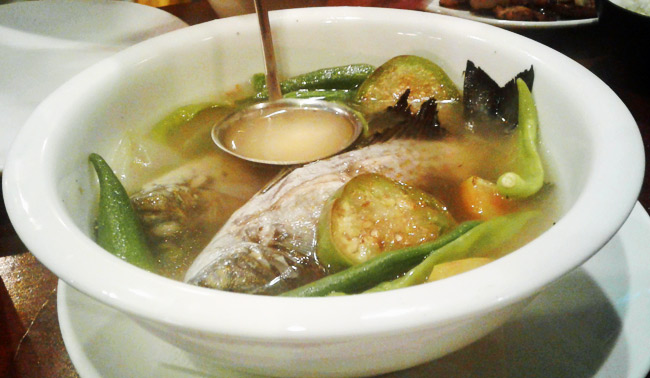 Those who want to carb-load should try poqui poqui, a couscous-like dish with egg and eggplant. The meaning of its name is quite naughty, if you care to look it up. 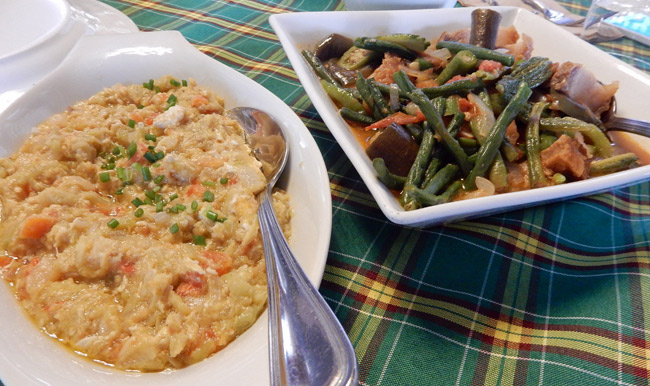 Don’t forget the booze! We enjoyed some of the local favorites. 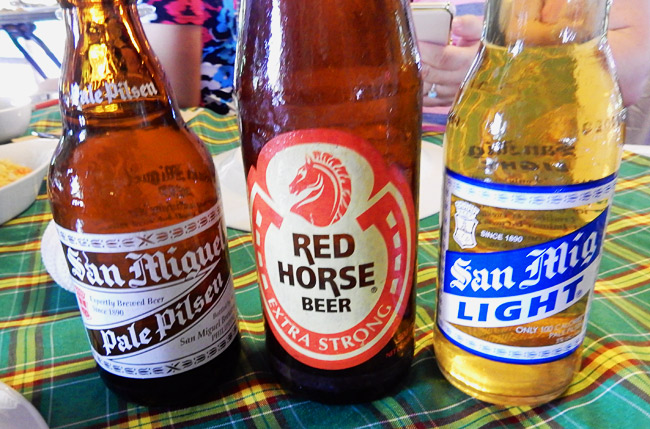 Pinakbet is a Filipino dish consisting of vegetables in a fish or shrimp sauce. Somebody at Herencia restaurant in Paoay had the idea to put it on a pizza. We ordered a pie split between pinakbet and sausage. 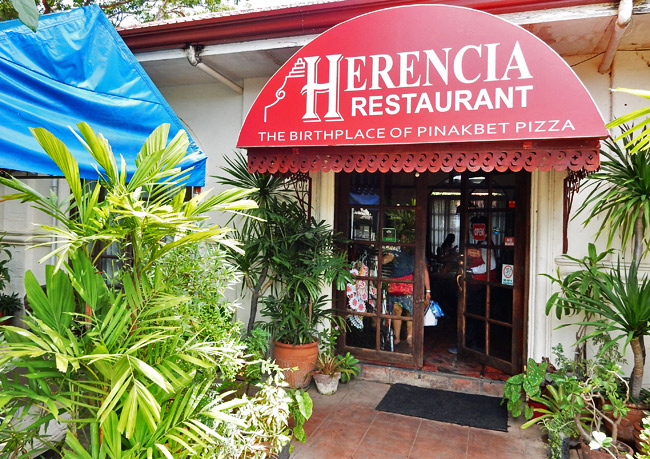 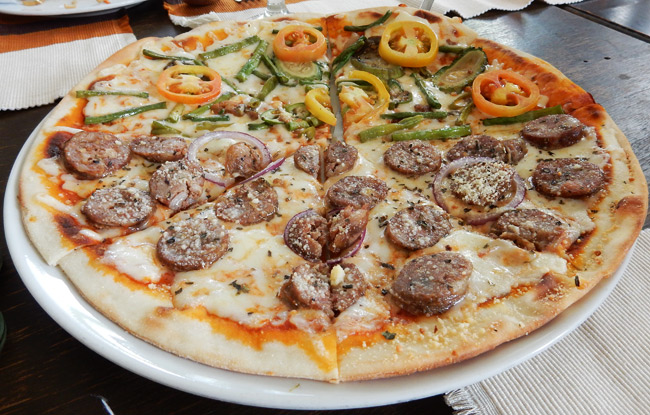 I enjoyed both, though my taste buds preferred the familiar sausage side to the pinakbet version. Although the pizza was good, my favorite dish at Herencia was the pancit canton, a Filipino version of lo mein. Pancit is a simple noodle dish, but it’s pretty universal and tasted a bit like comfort food. 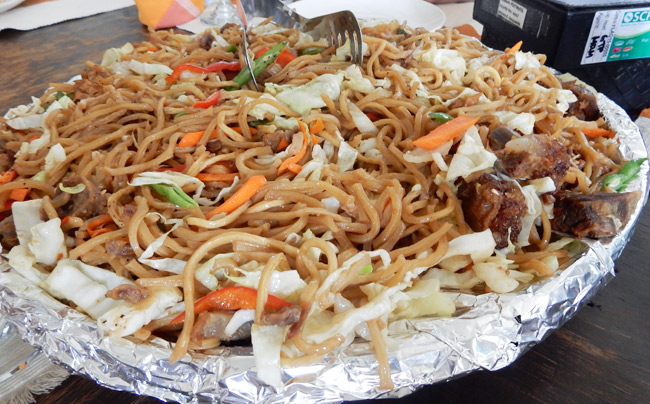 Laoag City in the Ilocos Norte province (home of the sinking bell tower) had a street market where vendors sold fruits, vegetables, and fish. The busy market offered up some interesting sights: 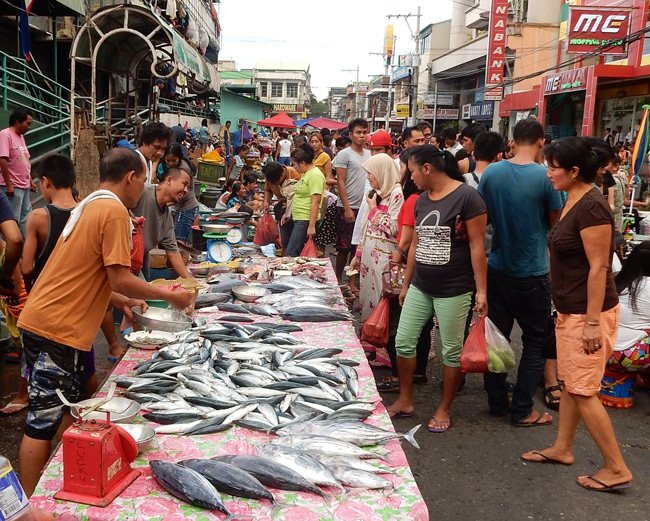 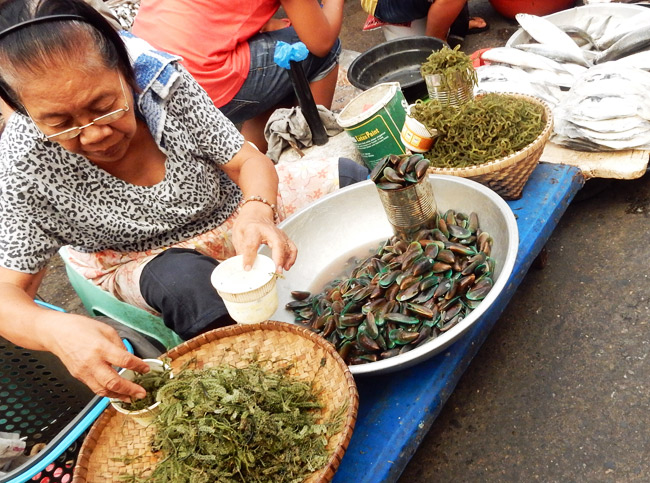 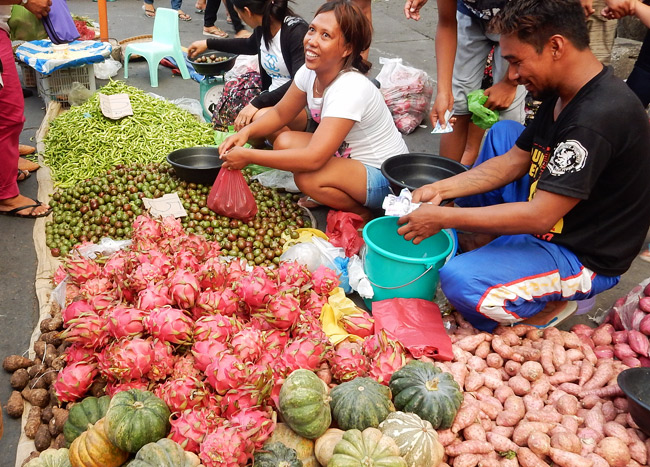 One of the infamous foods of the Philippines is balut, the boiled duck embryo eaten straight out of the shell. I only saw it once, from a street vendor who was selling it in Vigan. No, I did not try it, but if you’re adventurous, go for it!

In stores, some of the most interesting products included spicy salmon skin chunks and Lay’s kyushu seaweed flavor. 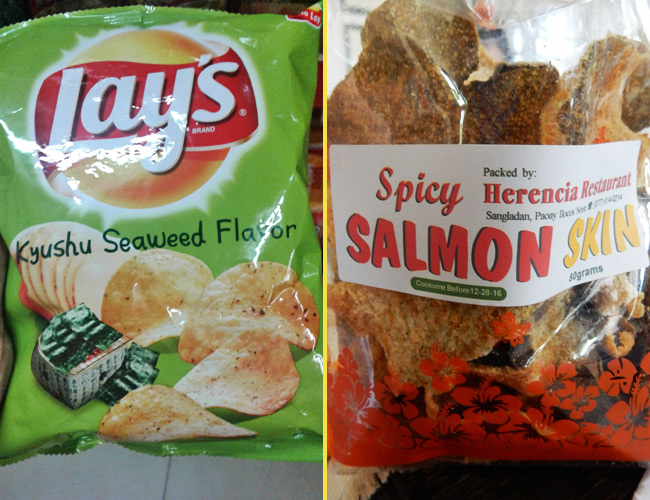 My favorite Filipino food of all is lumpia, essentially fried spring rolls. Interestingly, I didn’t have any lumpia while visiting the Philippines, but since I’ve been back in the USA, I’ve enjoyed lumpia many times and now I can’t get enough!

For more on Filipino cuisine, check out this CNN article or seek out the full episode of Bizarre Foods dedicated to this country.

Note: I was a guest of TBEX and the Philippine Department of Tourism during my visit to the country.

Which of these Filipino street food dishes would you most want to try?