For a pinball lover, the Pinball Hall of Fame (sometimes referred to as the Pinball Museum) in Las Vegas is paradise. Walk in the front door of the building on the Las Vegas Boulevard, and you’ll be greeted with the sight of hundreds of games spanning several decades, all neatly arranged into organized rows inside the 20,000 square foot warehouse. 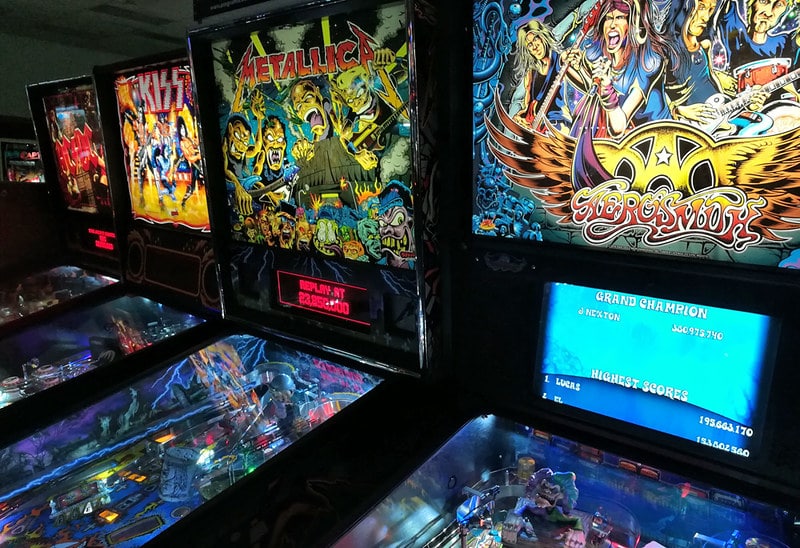 For just a few bucks, you can spend a couple hours wandering around playing the pinball games from youth, from today, and from way before you were born. Drop a quarter in the Family Guy game, then move to the Lord of the Rings game, then try out the Metallica game.

You’ll probably have way more fun here than you would gambling away hundreds of dollars in slot machines on the Vegas Strip! 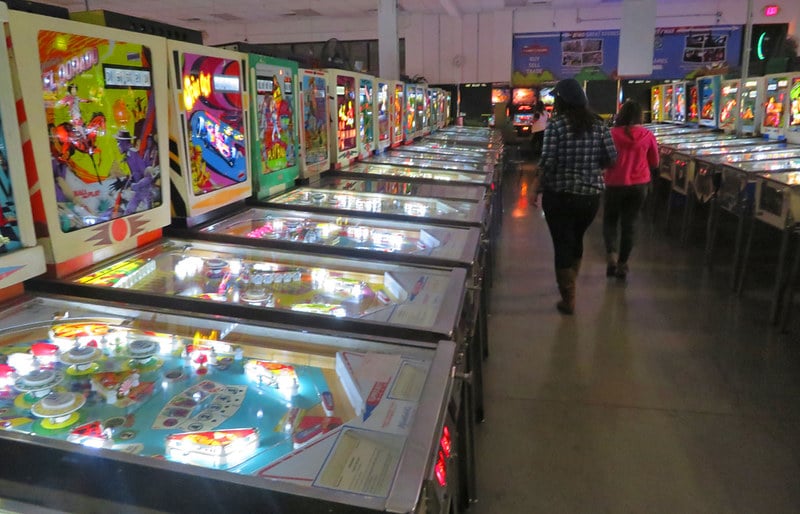 The Pinball Hall of Fame is not a traditional “Hall of Fame” in that they don’t hold induction ceremonies to honor the legends of pinball history. Instead, the games serve as the inductees.

It’s similar to the way that the Seattle Pinball Museum is not really a museum. Both are just places with a lot of pinball machines.

The Pinball Hall of Fame uses such a regal title because they believe they have one of the largest collections of pinball games in the world. And they do. 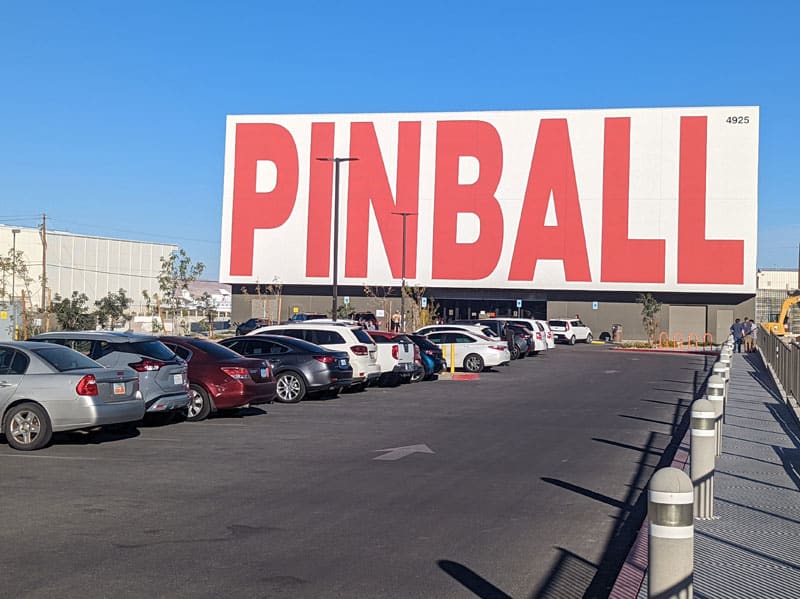 You can’t miss this facility, because it features the word PINBALL spelled out in giant letters on the outside! This is the new location of the building. It was previously located on Tropicana Avenue, much further from the heart of the city. Now, it’s in the perfect spot.

The new location is ideal. It’s right near the Vegas Strip and “Welcome to Las Vegas” sign! You can walk there from many of the casinos, as I did on my last visit when I stayed at Mandalay Bay.

This building is twice the size of the old one. The layout looks a bit different than it did at the previous location, but all of the same pinball machines are there, so it’s still very much worth checking out!

The new address of the Pinball Hall of Fame is 4925 Las Vegas Blvd South. The attraction has a sizable parking lot, which is rare for this part of the city.

Playing Games at the Pinball Hall of Fame: Hours, Cost

The Pinball Hall of Fame hours are 10 am to 9 pm daily (10 pm on Friday and Saturday. It’s free to get in. You just pay for the games you want to play. Individual games cost from 25 cents to 75 cents. There are change machines to exchange your bills for quarters.

Sticking with my usual plan of being a budget traveler, I mostly played the 25-cent games so I could maximize my cash. Like the arcades of yesteryear, they have change machines on hand to transform your crisp bills into quarters. 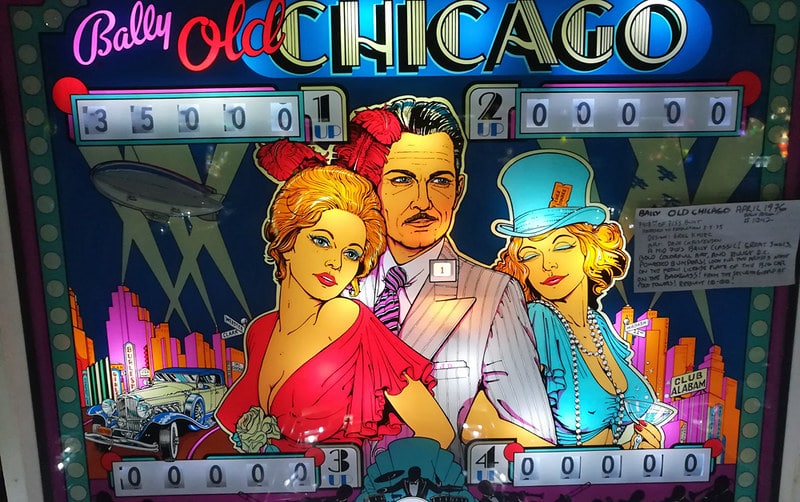 The cheaper games were usually the older ones, and those are the ones I wanted to play anyway. These vintage games, many from before I was born, were much simpler than the ones of today.

I like the older games because the scoring was more reasonable back then. Nowadays, you can score 200,000,000 points before you’ve even pressed a flipper. But back then, on some games it was hard to even reach 1000 points for an entire game. Imagine that!

The Hall houses games from the great pinball machine companies, including Bally, Chicago Coin, Gottleib, Data East, Stern, Williams, and many more. They even have a complete game list on their website! 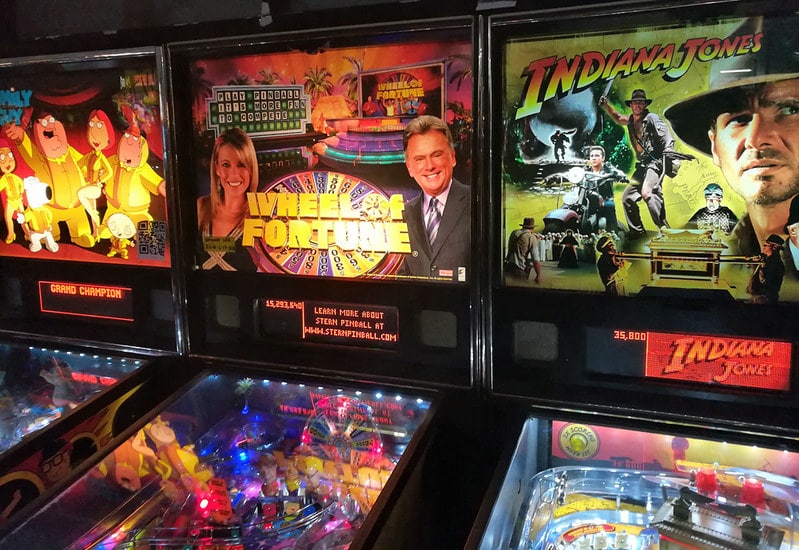 Games on Display at the Pinball Museum

The only game I played which cost more than a quarter was the 50-cent Elvira pinball game. It looked kinda creepy, and it turned out to be my favorite game because of its spooky sound effects and super-tight rubber band which caused the balls to fly around at lightning speed. 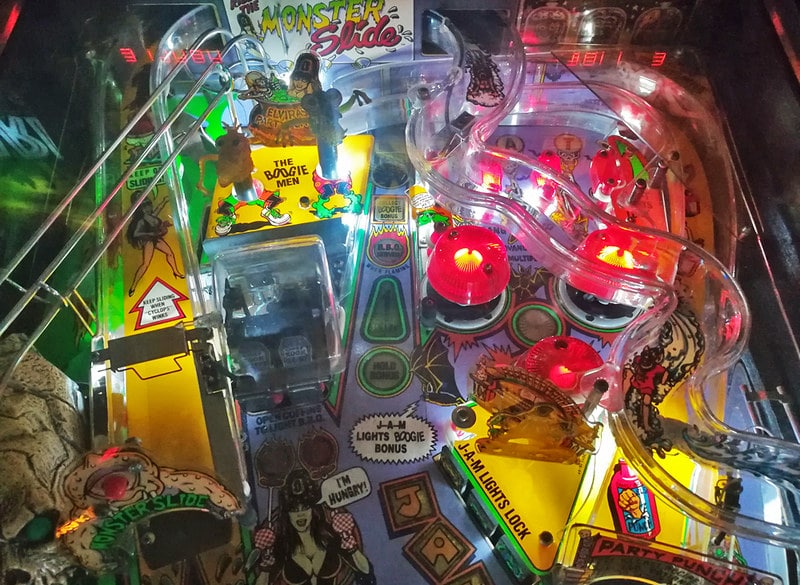 The game also had a lot of nooks and crannies for the ball to bounce around in and slides to blast the ball through. It was the only game on which I earned a free replay, with a score of 1.6 million points. Woohoo!

Check out this game called Carnival. It’s from 1957! Carnival is a pretty classic pinball machine, except that it has four flippers at the bottom instead of two. Only 300 of these games were made, and only three are known to exist today! You can see that it has some wear and tear, but it still works fine. 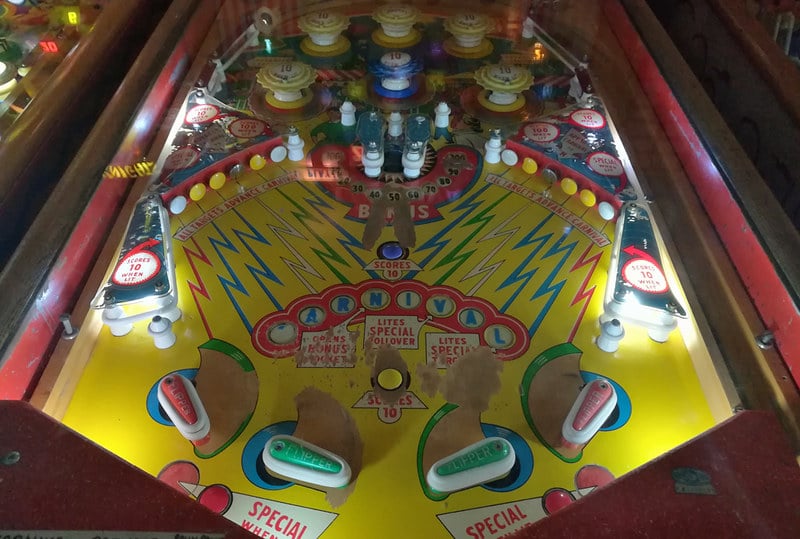 I really kicked butt on the Carnival game. Check out my final score. I broke triple digits! 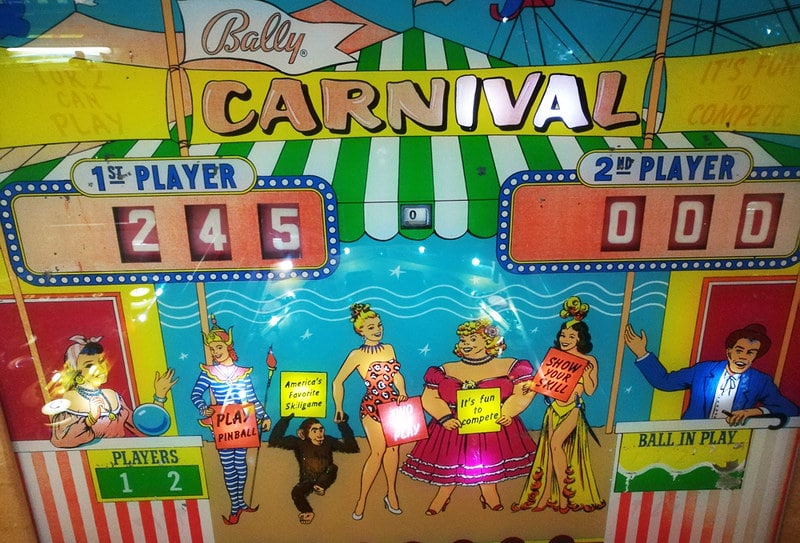 Lots of rock bands had their own games, including KISS, Metallica, AC/DC, Aerosmith, and even Sir Elton John. 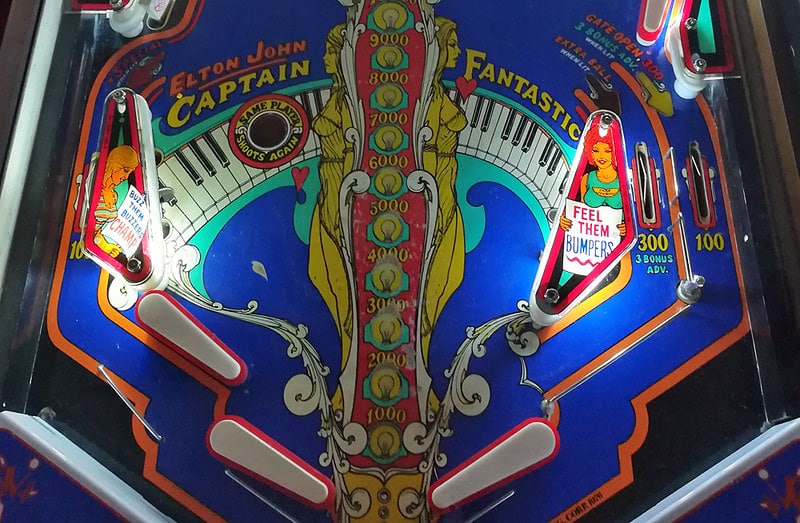 This place is perfect because hardcore pinball aficionados can seek out specific vintage games they want to play. And the rest of us can just wander around until we see a game that looks cool.

The amazing thing about pinball machines is just how different they are. You have Hugh Hefner and a bunch of bikini-clad ladies on the Playboy pinball game, which sits next to the Skipper and his little buddy on the Gilligan’s Island pinball machine. And then there’s this Speakeasy game, which seems like a perfect fit for Vegas: 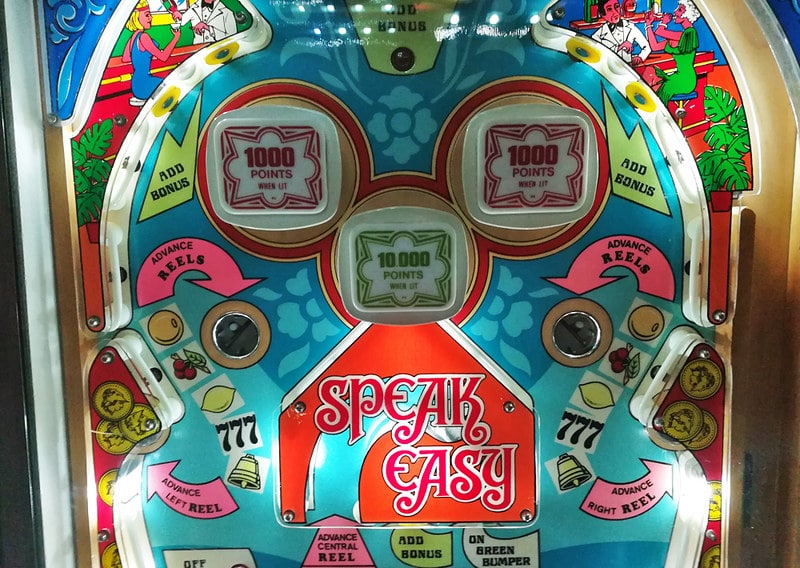 There are sports games of all kinds, games dedicated to tv shows like Wheel of Fortune and The Simpsons, and tons of movie pinball games, like Superman, Jurassic Park, Shrek, Spider-Man, Star Wars, Avatar, Ghostbusters, Star Trek, and Guardians of the Galaxy. Even the famed box office flop Waterworld has a pinball game!

Monopoly and Canada Dry have their own games. The WWF Royal Rumble wrestling pinball machine is here. There’s a Terminator game with a giant Arnold Schwarzenegger head, and a Popeye game in which the hero says, “Blow me down I iz a wiz of pinballz!”

Take one guess which pinball game this is! 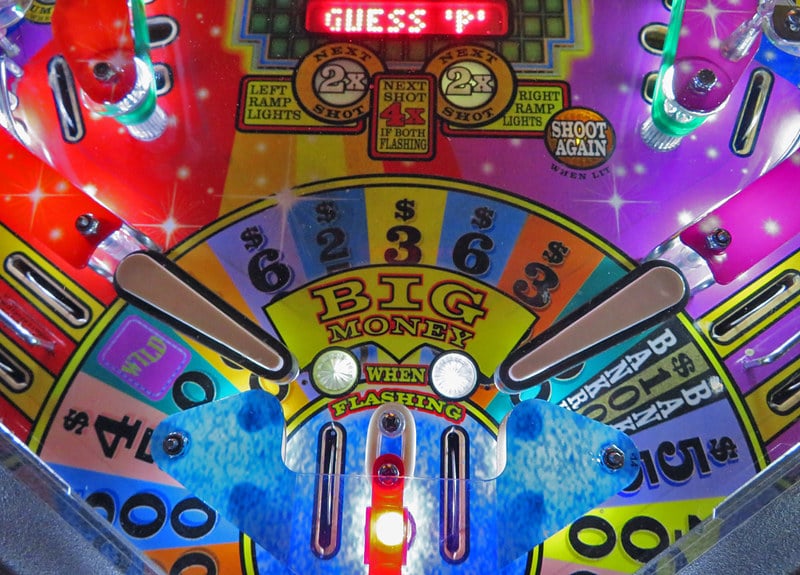 Here’s the classic Bally KISS game from 1979, when they were at the height of their glam rock powers. According to the Hall, 17,000 of these games were manufactured, ranking it as the second-most produced game in Bally history (behind Eight Ball.) 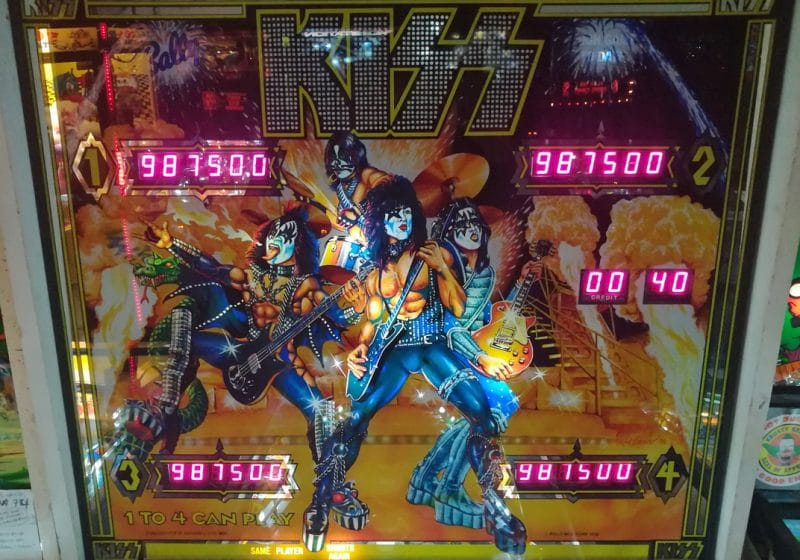 In addition to pinball, the Hall has some classic arcade video games, such as Dig Dug, Hogan’s Alley, Asteroids, and Mike Tyson’s Punch Out. They have shooting games and racing games too, plus some of those claw-grabby bins where you can try to grab a stuffed animal or toy.

Look at this wacky old hockey game by Chicago Coin called GOALEE. It was an extremely early version of bubble hockey and foosball. 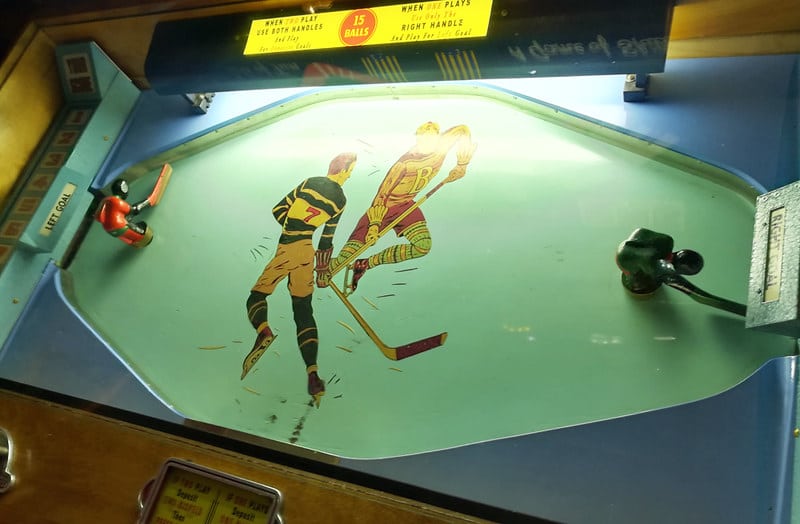 Oldest Games at the Pinball Hall of Fame

The oldest game currently on display is Heavy Hitter, a 1947 baseball game from Bally. It wasn’t a pinball game, but rather a baseball game in which the player used a flipper-like device to whack a ball into holes labeled single, double, triple, and home run. The oldest traditional pinball game on display here is Football, a 1949 game by Chicago Coin.

The previous location of the Pinball Hall of Fame in Paradise opened in 2009 on Tropicana Avenue. The attraction’s website describes the site as an attempt by the Las Vegas Pinball Collectors Club to amass the world’s biggest pinball game collection.

The Hall was created by Tim Arnold, who once operated an arcade in Michigan back in the ‘70s and maintained and transported many of those games with him to Vegas. 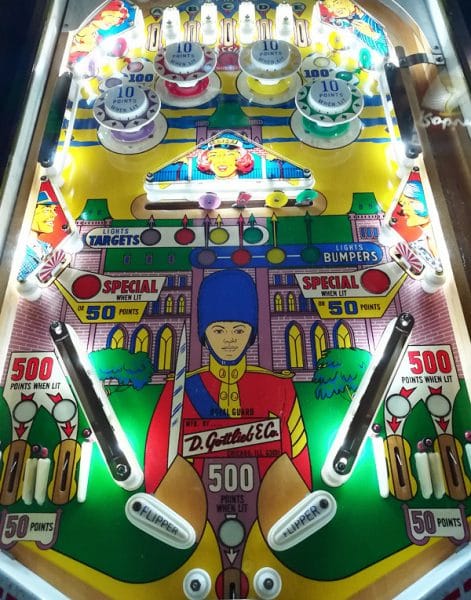 The Hall is a non-profit organization, with excess profits going to groups such as the Salvation Army. It’s an understated establishment, with no fancy marquees or advertising props. Just a plain room full of games. And they all work – the staff makes sure to quickly repair any games that may have problems.

The only drawback with the Pinball Museum is that, on my last visit, a huge number of games were not working. Many were turned off and sitting dark. But some were fully turned on and lit up, yet nothing happened when I inserted my quarter. I lost quarters on probably four different machines that simply weren’t functioning. Hopefully the Hall of Fame fixes this problem. 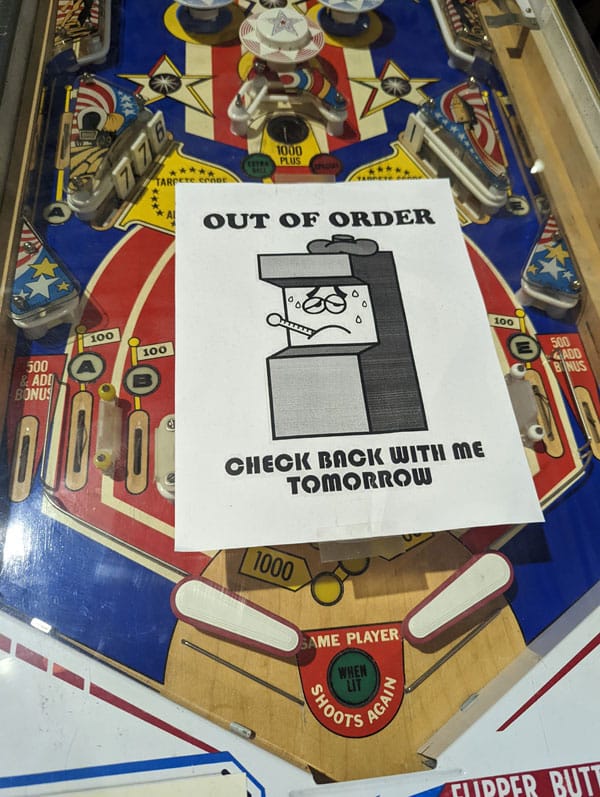 And just an fyi, if you arrived here by searching for “Pinball Hall of Fame: The Gottleib Collection”, that was a Playstation 2/Xbox/Wii video game from 2004 that featured re-creations of real video games. Some of the pinball games featured in that video game, such as Ace High and Black Hole, are housed here at the Hall of Fame and are available for play.

If You’re Going: The Pinball Hall of Fame 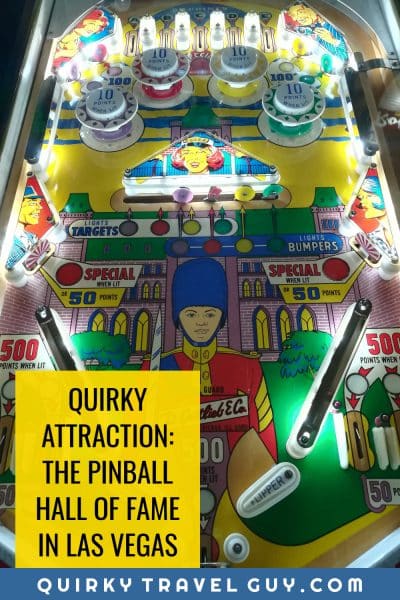 1 thought on “Quirky Attraction: The Pinball Hall of Fame in Las Vegas”