When I visited Toronto’s famed CN Tower, I expected cool views of the city from 1815 feet above. I did not expect to see a karaoke booth, a moose painted like a Mountie, and a nude beach(!) 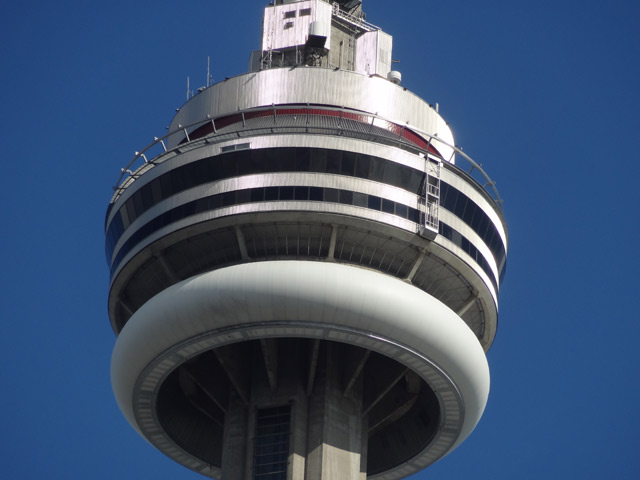 The CN Tower is undoutbedly one of the best places to visit in Toronto. Check out these photos of the CN Tower in all its glory. The cool thing is that it can be seen from all over the city, and it looks different from just about every angle. 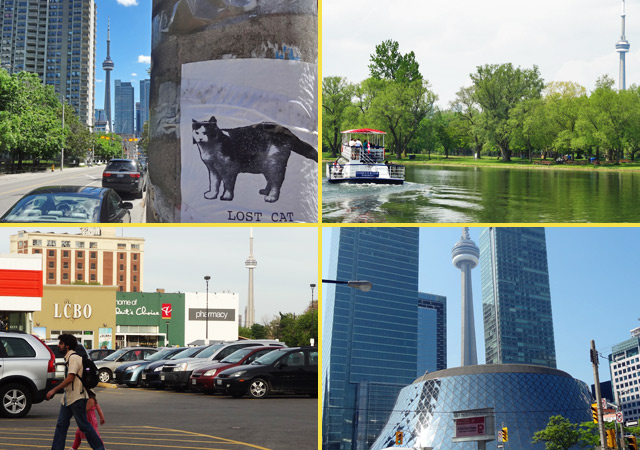 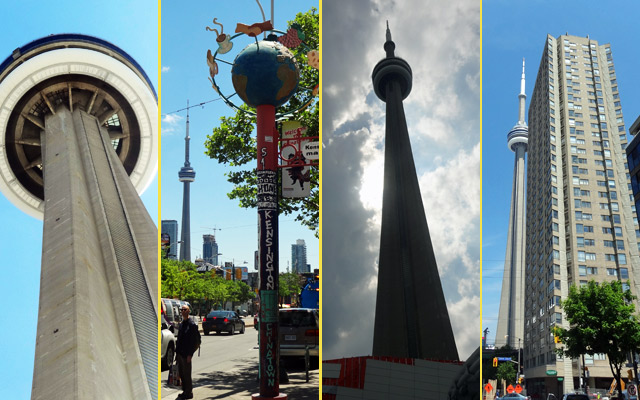 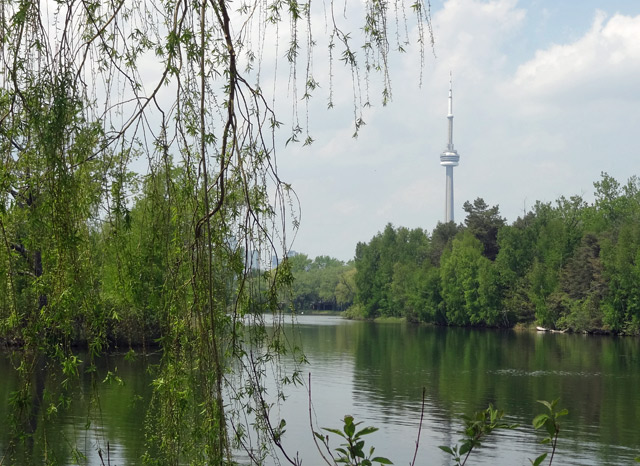 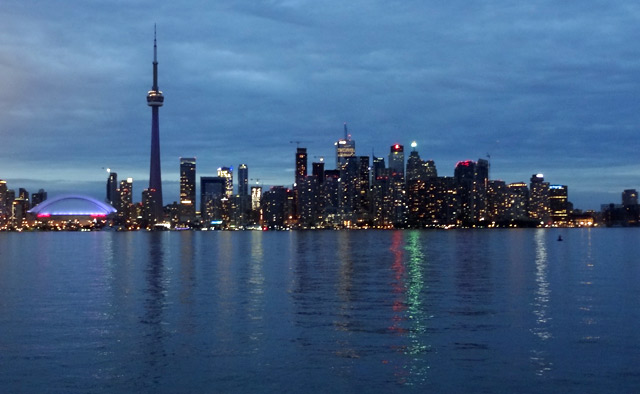 The quirkiest things at the CN Tower: 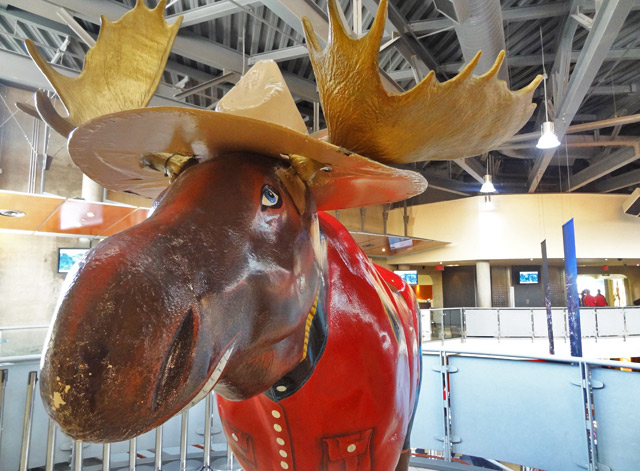 This is easily the coolest sight at the tower. Two iconic, stereotypical “Canadian” things come together as part of one beautiful, ridiculous fiberglass creature. 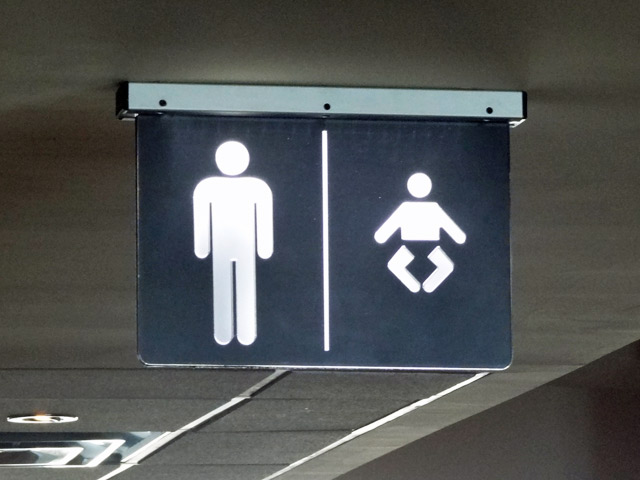 This one confused me for a while. Help me out – I’m assuming the figure on the right side is supposed to represent a baby? 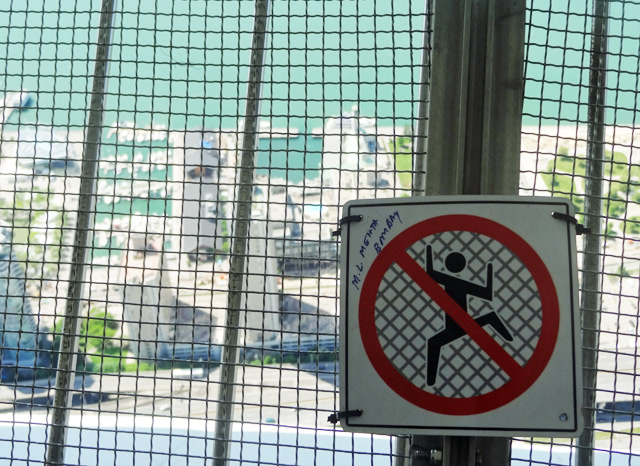 This sign is the best. It apparently means, “Do not climb up the wire meshing and jump off the CN Tower.” Evidently, some people need to be told this.

3. Whatever the hell this is 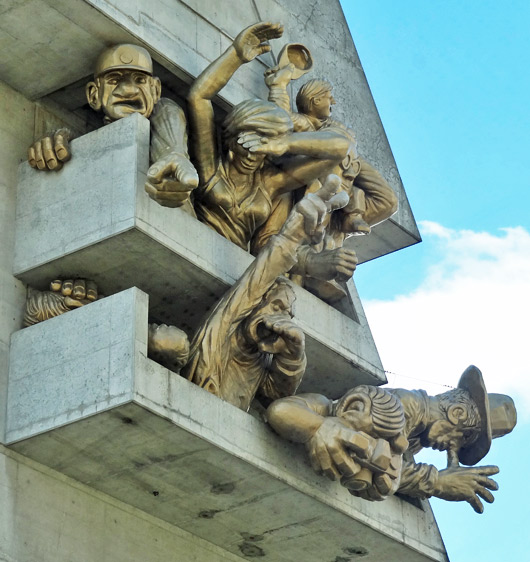 It’s found near the tower entrance. Apparently it’s a sculpture of sports fans, some of whom appear to be angrily protesting referee calls. Weird. 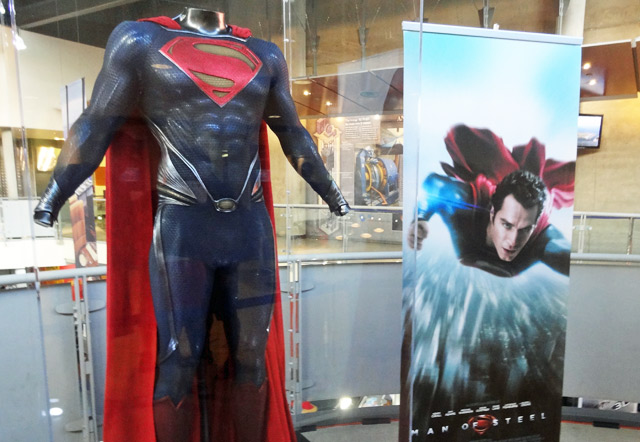 It’s probably no longer there, but when I visited, the Superman film Man of Steel was popular, so there was this large display dedicated to the movie. I’m not used to seeing advertisements in 3D, so I was definitely thrown by the sight of the superhero’s headless torso.

5. People afraid of the glass floor 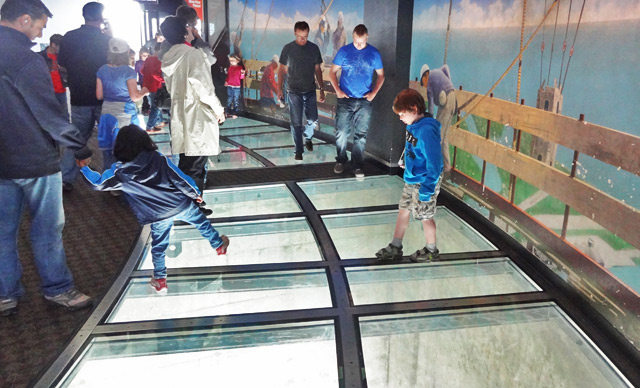 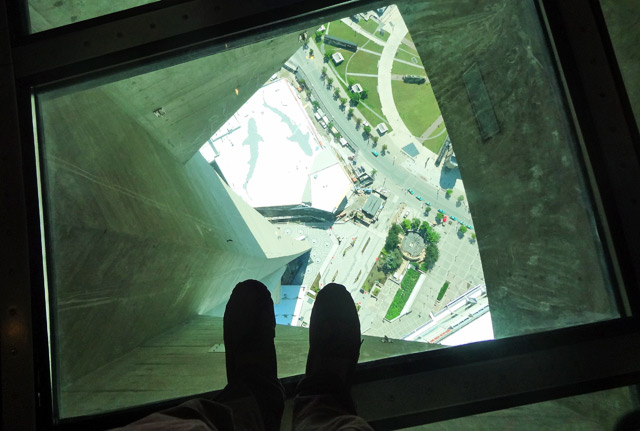 Much like the Willis (Sears) Tower in Chicago, the CN Tower has a glass floor. I’m always amazed that some people are scared to walk on glass floors like these. Come on, that glass is not suddenly going to break under your weight, after all these years of other people walking on it! The kids I saw at the tower had no such concerns.

6. A karaoke booth and an air hockey table 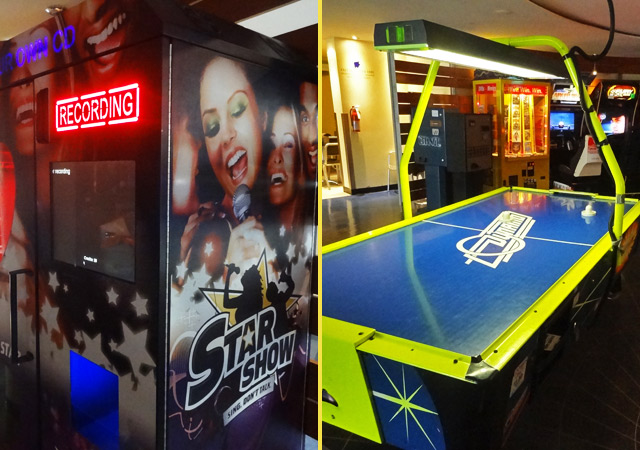 There’s a game room here. Who knew? Don’t miss the chance to belt out your favorite Celine Dion tune during your visit. 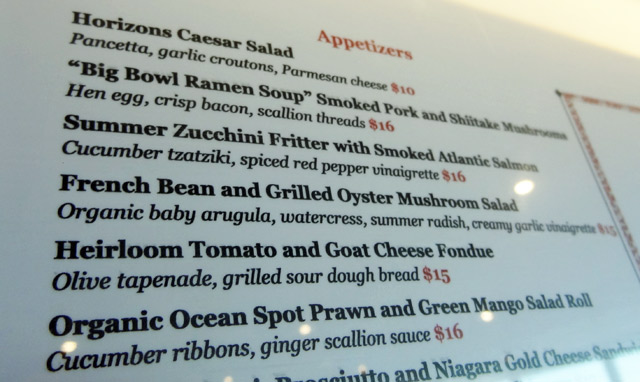 Yeah, there’s a restaurant inside the tower. For some reason, I didn’t expect that, but it makes perfect sense. Everybody loves to eat way high up in the air. Check out the menu here! 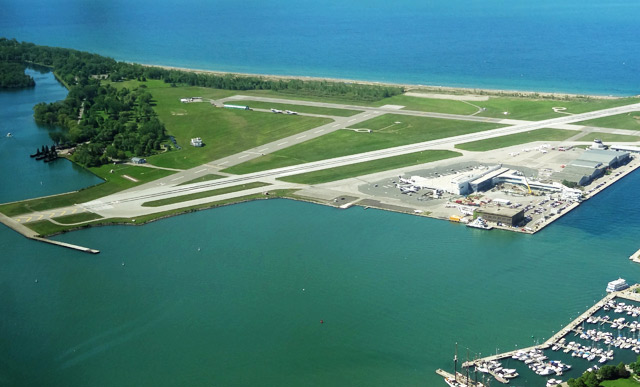 Toronto’s main airport is Pearson International, but there’s a smaller airport right into the Harbor Islands called Billy Bishop Toronto City Airport. From the top of the tower, it’s easy to look down and see the small aircraft arriving and departing. The runway looks so tiny from way up here. 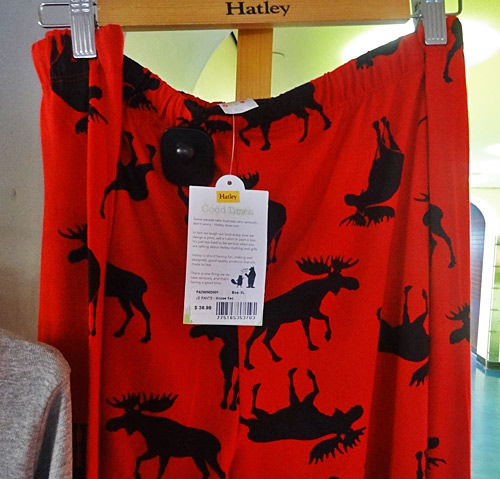 I could do an entire article highlighting the quirky items in the tower’s gift shop, but the moose pjs are my favorite. 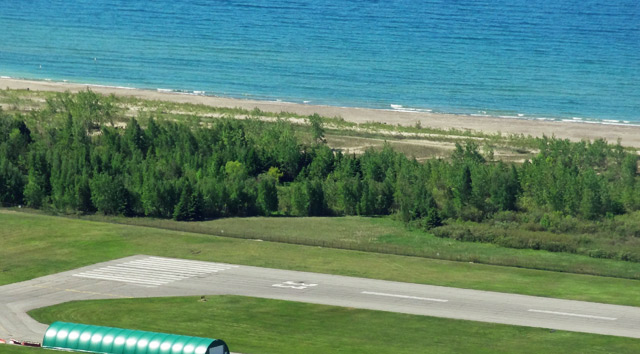 There’s a nude beach in the Harbor Islands at Hanlan’s Point, which is strange enough, since nude beaches are rare in Canada. What’s even stranger is that you can see down into the nude beach from the CN Tower! Sure, it’s really far away, and you might just see shapes and blobs, but if you bring a zoom camera or use the binoculars atop the tower, you can play voyeur and observe the naked people who think they’re sunbathing in private. Crazy!

The image above is what you can see of the nude beach with your bare eyes. It’s just a long stretch of sand, and nobody was there during the early morning hours of my visit.

Oh, and do you want to see the actual view from the CN Tower? Okay, here are a few obligatory shots. 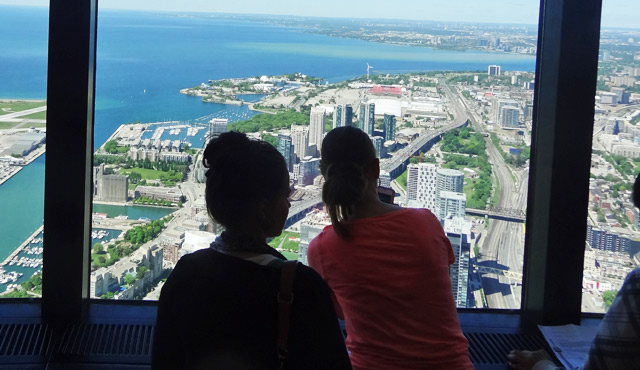 Here comes one of the coolest CN Tower facts: How tall is the CN Tower? The tower stands 1815 feet tall. That’s 50% higher than the Empire State Building, twice as high as the Eiffel Tower, and three times as high as Seattle’s Space Needle! 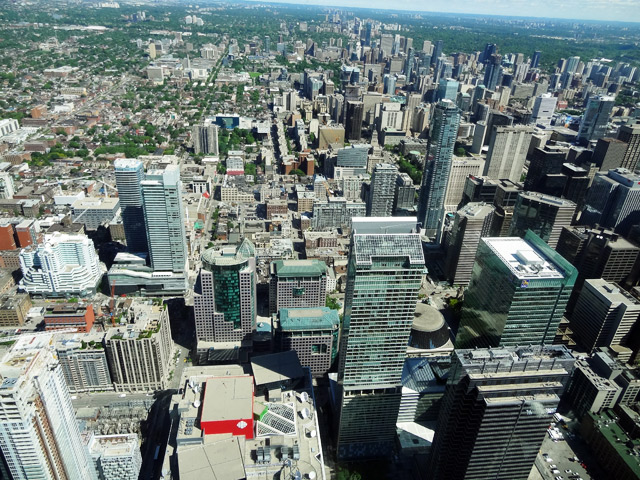 What does CN Tower stand for? Simple: the CN represents Canadian National, the railway company that built it. It’s amazing they haven’t sold the naming rights to another company by now! The tower attracts more than 2 million visitors every year. 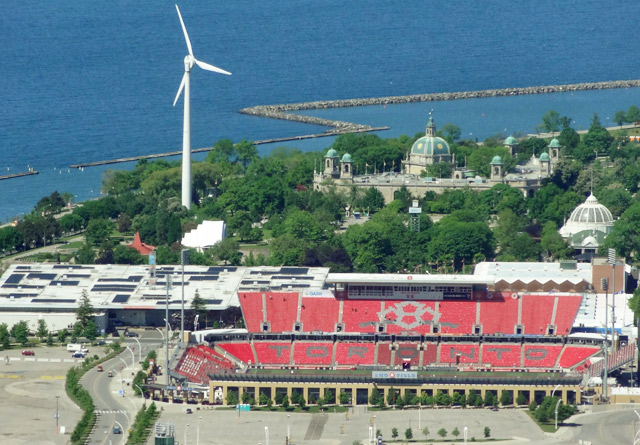 For the smoothest visit to CN Tower, buy tickets online in advance. The tower now offers all sorts of ticket packages. The most basic admission, as of 2019, is $38 CAD for admission to two observation levels. To get three observation decks, including SkyPod, you’ll pay $53 CAD. 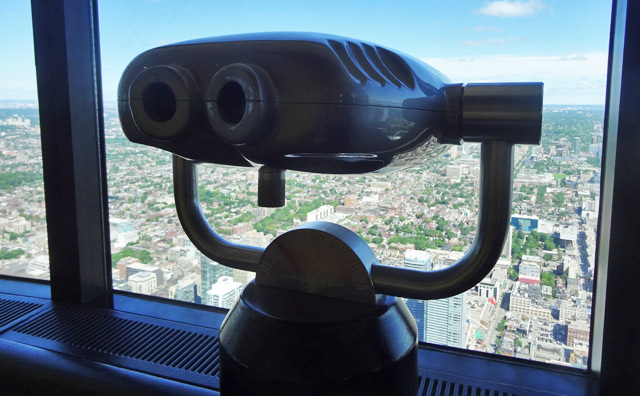 And then there’s the amazing Edgewalk experience, in which visitors are harnessed to the outside of the tower and get to experience the world’s highest hands-free external building walk! This one starts at $195 CAD. Remember that these prices are in Canadian dollars, so prices are a little lower if you convert to U.S. dollars.

Sometimes, there are special events in which participants can climb the CN Tower to the top. It’s 1776 steps to complete a CN Tower climb. That’s a ton of stairs. What a workout!