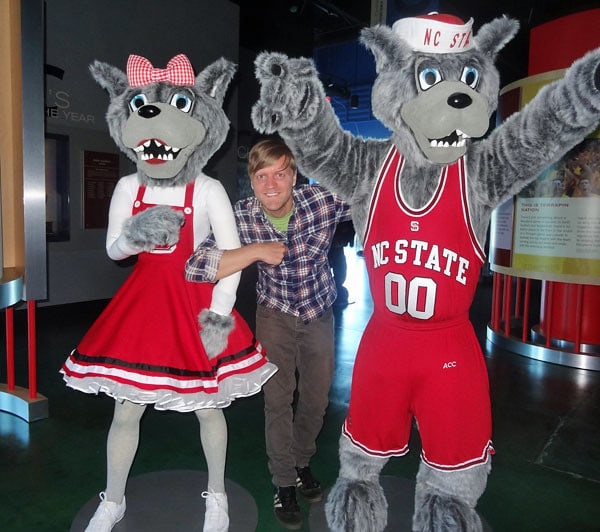 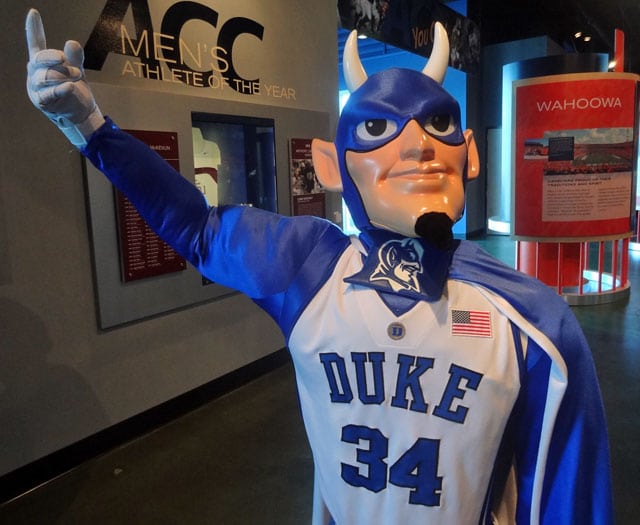 This shiny new facility opened in 2011 in the Greensboro Coliseum Complex. The hall has displays of memorabilia from over the years, like signed basketballs, the Duke True Blue soda, and a bobblehead of legendary coach Jim Valvano. 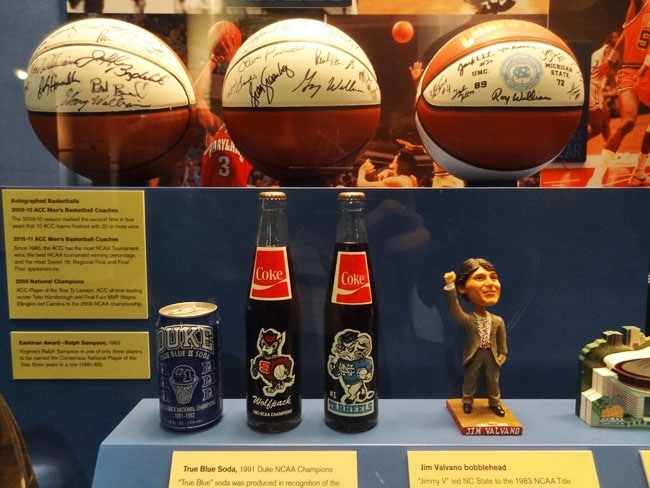 Another display focuses on women’s basketball. 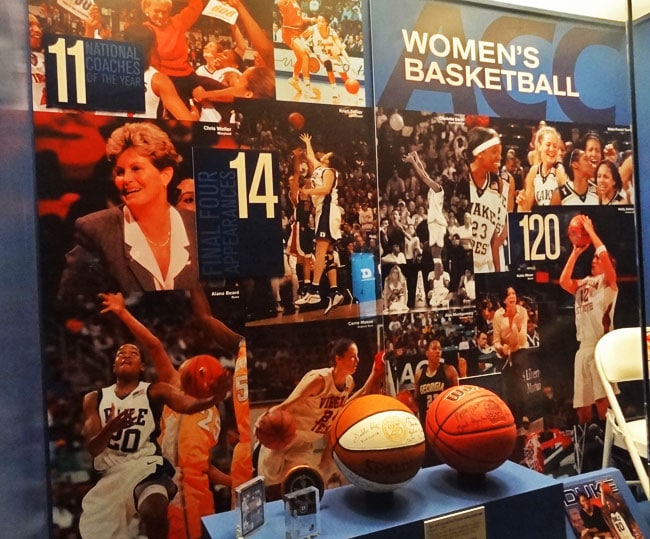 Each university has its own kiosk with information about its athletic accomplishments, as well as a full-size mascot. The great thing about having all these mascots in one place is that you can see which ones look really cool (Duke, Wake Forest, North Carolina State) and which ones resemble ridiculous cartoon characters (sorry, Virginia Tech and Clemson.)

The Virginia Tech Hokie is the sad-looking purple-ish bird on the left: 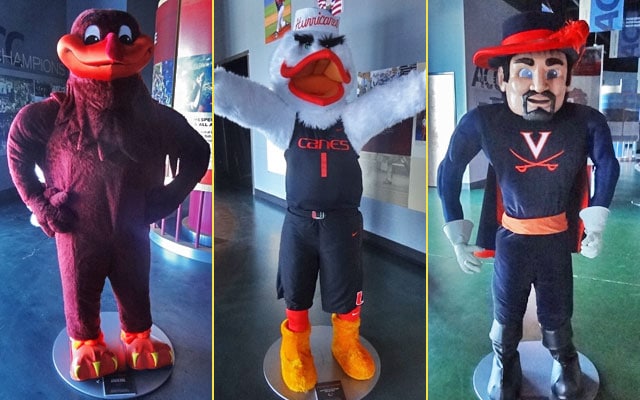 My favorite is the Wake Forest Demon Deacon. 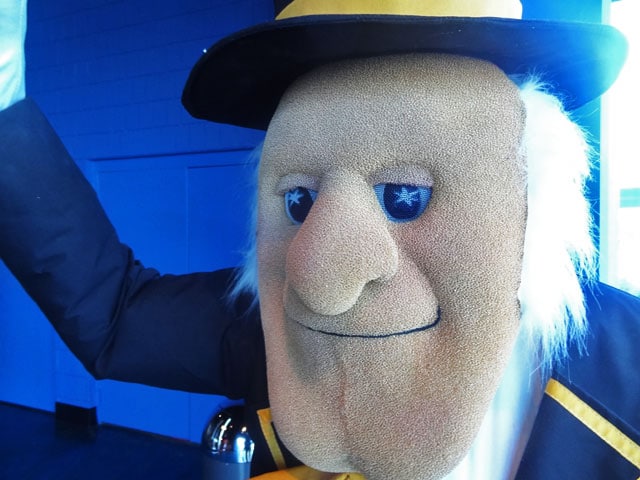 Or the Georgia Tech yellow jacket. 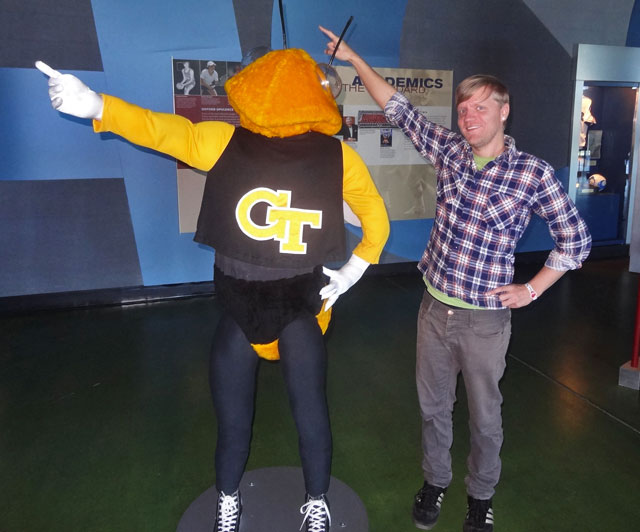 The hall did not initially have any displays for incoming ACC schools Pittsburgh and Syracuse, but that was rectified after those scgools officially joined the ACC.

Other attractions include a trivia game with questions about ACC history covering all sports. I made a bunch of lucky guesses and ended up destroying the competition. Quirky wins! 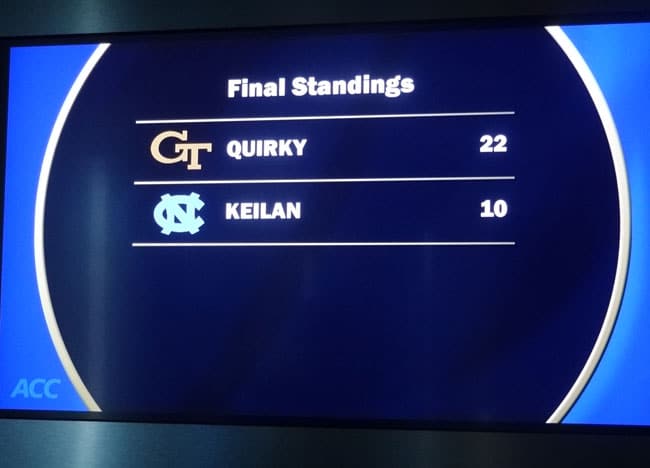 And there’s a broadcast booth where you can announce clips from conference games. I could’ve been a sports announcer in another life. In fact, when I watch games on tv, I’m usually announcing them in my head. So this gave me a chance to live out that dream. 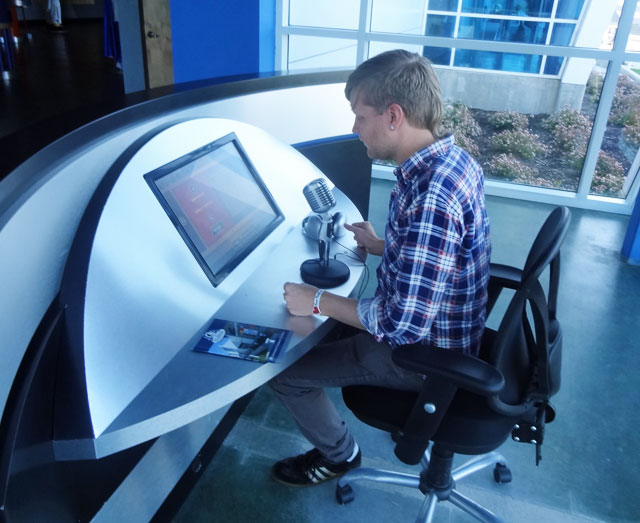 The ACC Champions Hall is only open from 10 to 4 on Thursday through Saturday, so plan accordingly. The facility does sometimes offer extended hours when Greensboro hosts NCAA tournament games and the city is full of visitors.

The Hall is a cool idea, although they could’ve done more with each of the individual school displays. Something like this should be more popular than it actually is. I guess in some ways it’s a victim of the fact that Greensboro isn’t a tourist hotspot.

When I visited, admission was $5, but the ACC Hall of Champions currently offers free admission. It’s one of the coolest things to do in Greensboro, North Carolina!

Which is your favorite mascot at the ACC Hall of Champions?