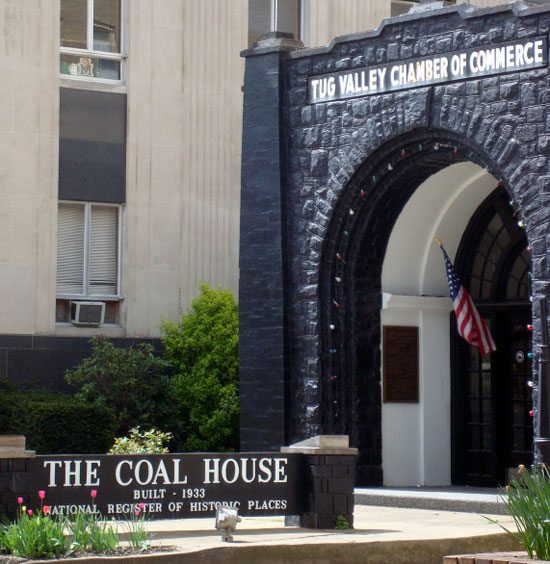 Coal happens to be a flammable substance. What on earth would possess someone to make an entire house out of coal?

I’m not sure, but the Coal House in Williamson, West Virginia, just across the Kentucky border, claims to be the only building made entirely of coal (there are a couple of other imposters, apparently.) It’s not even a “house,” in the sense that no one lives there. It serves as the home of the Tug Valley Chamber of Commerce and the Williamson Convention and Visitors Bureau.

The building was constructed in 1933 out of 65 tons of bituminous coal and features a large arched doorway. It’s listed on the National Register of Historic Places and is one of the quirkier attractions in this part of the country.

The building is right in the heart of this town of about 3000 people. It’s a walkable area. You can park here, see the Coal House, and then walk over to the Tug Fork River that serves as the border between West Virginia and Kentucky.

The big arch on the building is quite impressive. On the side of a building, there’s a plaque that reads, “This building constructed of Winifrede seam coal mined and donated by Crystal Block Mining Co, Leckie Collieries Co, Puritan Coal Corporation, Sycamore Coal Company, Winifrede Block Coal Co.” 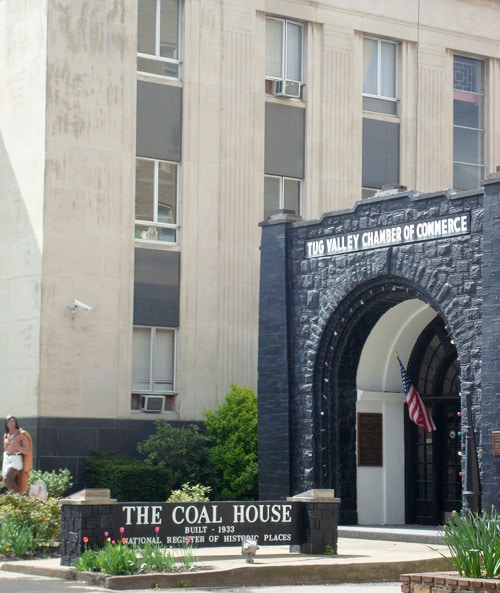 The Coal House has a welcome center and gift shop for those inclined to go inside and learn more about the place and its history. You’ll see all sorts of coal-related artifacts inside. It’s 1600 square feet in total and sits next to the Mingo Country Courthouse. There’s a Native American statue in front of the house as well.

Here’s a big surprise – the Coal House caught fire and was severely damaged on Columbus Day 2010. You can’t escape the irony – it’s sort of like building a house out of paper and being mad when it blows away, no?

“Coal House” has become a popular phrase, since there’s now a Coal House Pizza in New Jersey, and there was a Coal House tv series on BBC in 2007. But if you want the real thing, a building actually made of coal, Williamson, West Virginia is where you need to go!

4 thoughts on “Quirky Attraction: The Coal House in Williamson, WV”